Mar 21, 2019 - Cozmo_BNG
This week at Bungie, the Drifter keeps drifting.
We are now in our third week of Season of the Drifter and there’s a lot going on. All three tiers of the Reckoning are live. The Thorn quest is available for those who are brave enough to wield a dark weapon. Gambit Prime is on Legion’s Folly for the first time this week, and it will migrate to Emerald Coast next week. 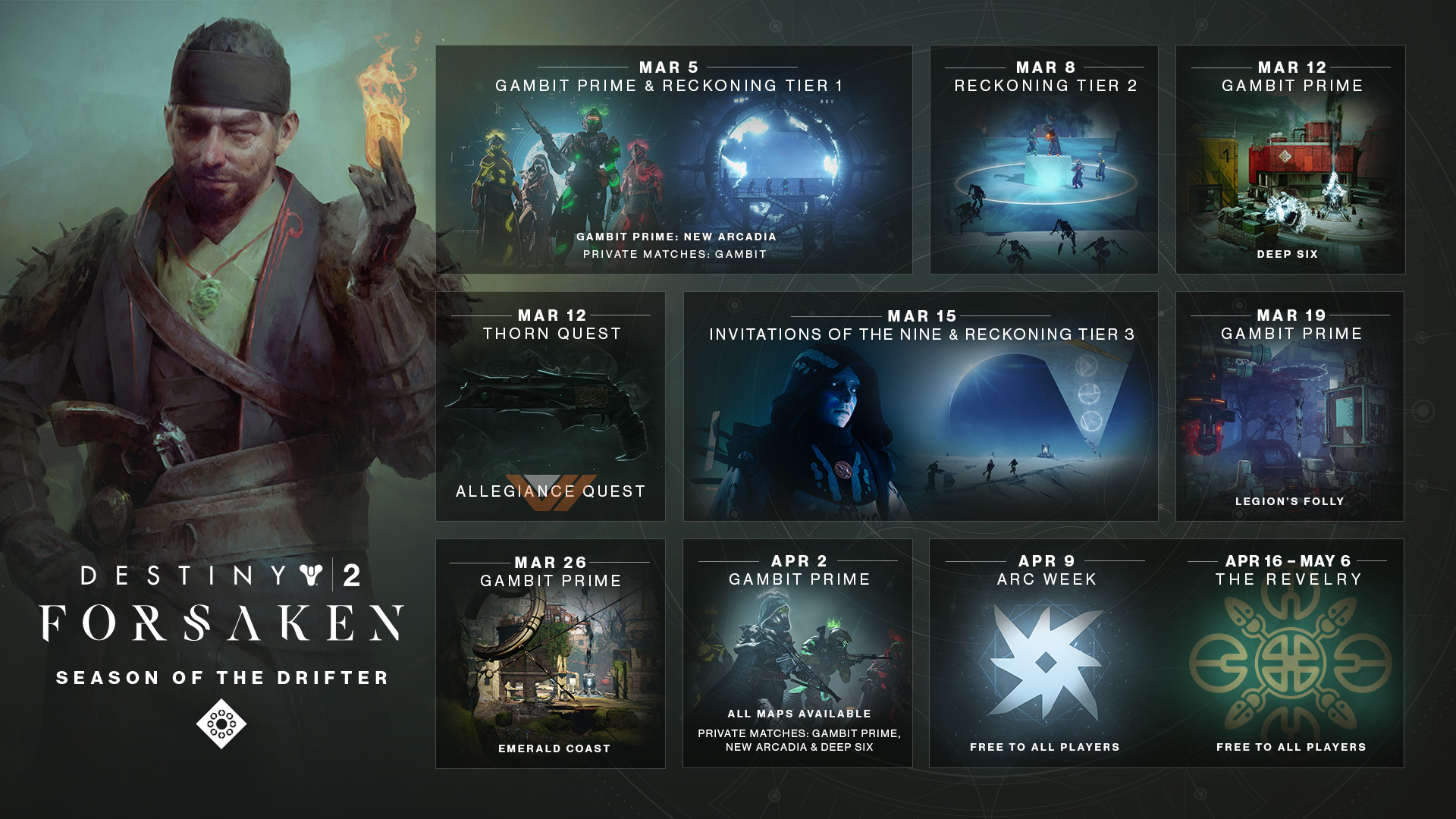 If you’re looking for lore, Invitations of the Nine started last Friday, and it continues for many weeks to come. Complete the first invitation to discover the backstory of the Drifter and his ties to the mysterious Nine. Everyone who accepted the first invitation last Friday will have a new experience this week. If you missed it last week, don’t worry. You can pick it up this Friday. There won’t be a cutscene every week, but that definitely wasn’t the last one you’ll see.

The Iron Banner returns for the first time in Season 6 next week!

This season, Lord Saladin has a few new tricks up his ironclad sleeve. We’re introducing two new consumable items that will change the flow of combat through temporary Power level adjustments.

The Iron Burden consumable is for the best of the best to challenge themselves by lowering their Power by 100, putting more focus on skill, strategy, and gunplay. With greater risk comes greater reward. For the brave, Saladin will be offering the Iron Burden consumable for purchase with 5 Iron Banner Tokens. There will be a new Triumph you can complete this Season by defeating 500 opponents while the Iron Burden debuff is active. Completing it will reward you with an updated version of Wizened Rebuke that is fully Masterworked and has a curated roll. You don’t have to complete this during the first event. Your progress will carry over to the next Iron Banner.

For those of you who find yourselves in PvE activities more frequently, the Wolf’s Favor consumable has been added as an invitation to try your hand in the Iron Banner. These consumables, which will drop with limited availability, grant a temporary 100 Power increase, up to a cap of 700, for 30 minutes. Our goal here is to help those who don’t normally play Crucible take a step in to the action.
The Wolf’s Favor consumable has a chance to drop from completing the following daily and weekly challenges:

Bounties have been updated to provide more choice and address feedback from previous Seasons over how long it took to earn progress toward various objectives. Each bounty will grant a powerful reward upon completion. Additionally, completion of a bounty will unlock the ability to direct purchase specific rewards from Lord Saladin. Saladin will also offer a new emblem you can pick up after completing all the weekly bounties called the Weight of Guilt. It will track higher-Power opponents defeated while under the effects of The Iron Burden. We have also added an updated version of Orewing’s Maul with random rolls that will drop from match completion and from token packages. 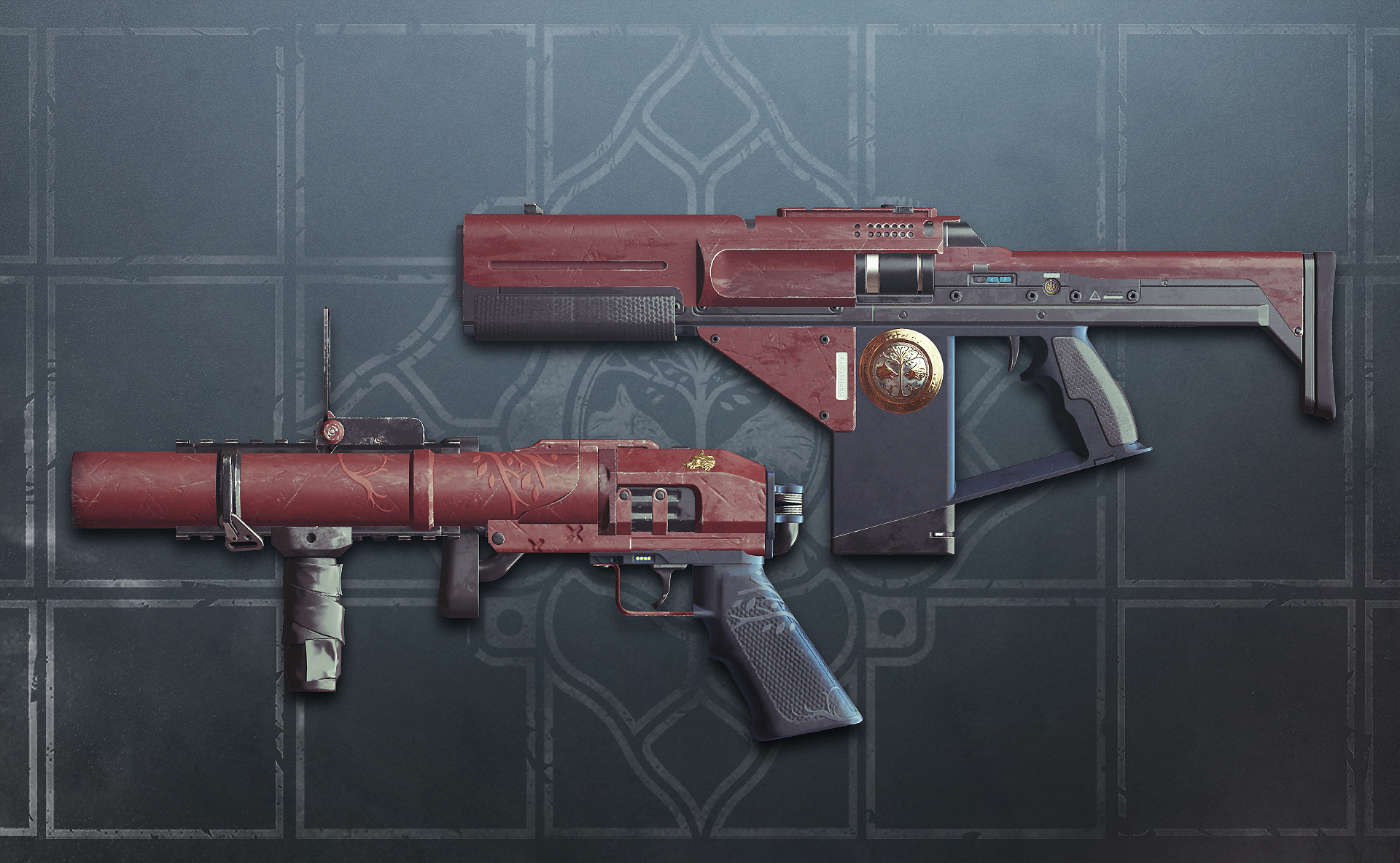 We’re trying something new with Iron Banner this season. As always, we’re eager to hear your feedback. Let us know what you think about the changes after you spend some time in the Crucible.

As you make progress in Season of the Drifter, you’ll be making choices about which weapons and armor you want to power up first. We’ve been following the conversation around the use of Enhancement Cores for infusion. As a response, the Destiny Dev Team have some changes lined up that they want to share.

Destiny Dev Team: The goal of the infusion system is to create an impactful feeling of progression when you increase the Power of an item you enjoy using. An infusion system with no scarcity around the materials would diminish this impact. To that end, we tapped into a material with inherent scarceness, Enhancement Cores, to use as one of the keystone materials for this process.
That is the goal the infusion system, but if the overall system is causing a negative experience, we want to work to improve it. We’re constantly monitoring the infusion economy to see what kind of impact it has on gear usage. We keep a close eye on the amount of infusion materials being earned versus how many are being used and will continue to make adjustments as needed.
To that end, we’ll be making a change in Season of Opulence with the goal of providing more access to Enhancement Cores.
Scrapper Bounties previously dropped randomly when dismantling gear. There was no reliable way to earn Enhancement Cores using these bounties, and we didn’t feel they were providing enough materials. We will be deprecating these bounties at the start of Season 7. (Note that any unfinished Scrapper Bounties still in your inventory when the new season begins can still be completed before their natural expiration.) In their place, the Gunsmith will now offer a selection of daily and weekly bounties that can be purchased for Gunsmith Materials. As with the Scrapper Bounties, each of these will include, among other things, an Enhancement Core as a reward when completed.
Our hope is that this increased access and control over Enhancement Core acquisition will help improve the balance of materials being earned vs. materials being used. As always, we’ll be continuously monitoring this item economy, along with your feedback to assess its effectiveness.

Who Do You Truly Serve?

Season of the Drifter offers your characters an interesting choice. Your decision impacts your experience with both the story and the world around you. So far, we’ve enjoyed watching the debate between Team Drifter and Team Vanguard.
We wanted to give you a little insight into where the community has been pledging their allegiance. The following two graphics show which side is receiving the most pledges. The first graph is an account-level look and looks at data on which side you pledged to first. The second is character based, and takes into account all the characters that pledged overall.
Account-level

So far the Drifter has received a lot of support. The question still remains: Should he be trusted?

The Player Support Team is on the front line every day, making sure any issues are properly triaged and sent to the dev team for fixing.
This is their report.

Last week, we highlighted an issue where players with full Pursuits inventories were not receiving their Allegiance quest item from the Drifter, regardless of which side they chose. With the conclusion of our Tuesday maintenance, we expect this issue to be resolved.
In addition to this change, we’d like to highlight the resolution of the following issues:
For the full list of issues resolved in Tuesday’s hotfix, players should visit the Destiny 2 Hotfix 2.2.0.2 patch notes.

Earlier today, between 10–11 AM PDT, all Destiny services underwent scheduled maintenance. This involved taking both Destiny and Destiny 2 offline across all platforms, and no changes were made to the game experience.
Players who observed issues following this maintenance should report them to the #Help forum.

This week, we’d like to take the opportunity to revisit some existing known issues, which we’ve covered in past weeks.
For the running list of all issues tracked by Destiny Player Support, players are encouraged to visit our Destiny 2 Known Issues help page. Players who encounter other issues should report to the #Help forum.
When reporting a gameplay issue, providing screenshots, captured video, or repro steps will help Destiny Player Support investigate your report.

Week of the Movie

Welcome to Movie of the Week. Does anyone read this section? Or do you just skip down to the movies? I don’t blame you—they are pretty good. I’ve probably written this section over 100 times now, and I’m running out of ways to tell you that this is where we pick our favorite videos each week to share them with the community. The best place to submit your entry is our Creations Page, but you can also win if we discover your video randomly on the internet and enjoy it. Did I mention the emblem yet? You get an emblem if you win. Just make sure you put everyone’s player name who worked on the video in the description of the video. Thanks for taking the time to read this section. Enjoy the videos.
Movie of the Week: Destiny War 2

Oh yeah, there was a Bungie Bounty this week as well. Dmg04 led a brave fireteam comprised of players from Team Velveeta (our very own ant-cheese test task force) to an impressive record in Gambit Prime. You can watch the whole thing right here. We have one more bounty planned on PC for April 3 at 10 AM PDT. In the last two bounties, Bungie has bested most of our challengers. We invite you to break the streak. Find us, kick our ass, and earn a sweet emblem.
We are working on some plans to put some more bounties out in the wild on all three platforms in multiple locations. We will give you more details soon.
<3 Cozmo