Mar 14, 2019 - A_dmg04
This week at Bungie, we restored the Thorn in your side.
If you can remember your first revive in Old Russia, other memories of Thorn may plague your nightmares from time to time. This week, those same nightmares returned in full force. If you’re a Guardian who’s new around these parts, get ready to feel the sting.

Will you dare wield Thorn, the legendary Weapon of Sorrow? pic.twitter.com/jvhqaKNxus
— Destiny The Game (@DestinyTheGame) March 11, 2019

Owners of the Annual Pass can begin the journey to acquire this weapon by sifting through the ashes of the EDZ. Earn a weapon fit for a villain, and unleash chaos among your foes. To celebrate, we’re also adding new Bungie Rewards for players to earn as they complete the quest and other content in Season of the Drifter. The following rewards will be added to the website on March 19, 2019:

Do you side with the Vanguard or the Drifter? Depending on your choice, you’ll receive a set of rewards specific to your allegiance. Through the Allegiance quest, each side will offer unique lore. Each week you’ll receive a small package as gratitude for your pledge. Throughout Season of the Drifter, depending on your pledge, one of these packages will be found at Ikora or Drifter upon each weekly reset:
Vanguard Weekly Package:
Drifter Weekly Package:
If you’re the type of player who wants it all, or you're an all-out lore collector, you can make a different pledge on alternate characters. Just remember that your choice will last. You can either side with a slick-talking Drifter or be like me and side with those who protect the last safe city and its people.
There’s no bias here, I swear!

Last week, Reckoning tiers 1 and 2 went live, bringing players to the plane of the Nine. Tomorrow, tier 3 will become available, opening the chase to fully unlock your Gambit Prime perks. This activity will have a Power level requirement of 680. Players will need to fully upgrade their synthesizer to enter. Modifiers are also active in this playlist, so be ready to mix your arsenal up for the challenge.
Matchmaking will continue to be available if you’re looking to take on the challenge without a pre-made fireteam. Things may be a little trickier without strategy or communication, so prepare for some white-knuckles as you race the clock to eliminate the darkness. We’ll be watching, as will the Nine.
Speaking of the Nine, Invitations of the Nine also begins tomorrow.

To begin, you’ll need to track down Xûr. In addition to his Exotic inventory, he’ll also offer a quest item for you to complete each week, for up to nine weeks. Each week you engage, you’ll be invited to learn more about the Nine and unlock lore pages to dive deeper into their story.

With Season of the Drifter little more than a week old, we’re tracking down some bugs to squash and quality-of-life to address. We’ll be deploying hotfixes and updates, along with some back-end server changes to help keep things fresh. Here’s a quick list of changes specific to Gambit, Gambit Prime, and Reckoning that are currently in-flight.
Gambit Matchmaking [Revised 2:20 PM 3/14/19]
With the release of this very blog article, Gambit received some updates to matchmaking. Gambit is a team based activity and as such, players who are in a pre-made fireteam have a communication advantage. To offset that advantage, we've raised the internal skill rating of pre-made fireteams to pull in higher skill enemies to fight against. With this change, even as a solo player, you'll still have a chance. Plus, your other matched fireteam mates should be higher skilled as well.
Solo players of low skill should expect to match other solo players more frequently. Higher skill teams will also match teams more frequently.
Gambit Prime Synths
Shortly after the release of Gambit Prime, players began filling their inventory with Prime Armor Synths. Tentatively planned for Hotfix 2.2.0.2, players will be able exchange a stack of 5 Synths for 100 Glimmer with the Drifter. The intention of this isn’t to give players a means of acquiring large amounts of Glimmer, but strictly to help address inventory issues.
Reckoning Modifiers
In early playtests at the studio, Prism proved to be more challenging than intended in higher Tiers of Reckoning and we planned to remove it in the first patch proactively. When we launched last week, we collected some fairly positive feedback with Prism and wanted to react quickly and remedy that change. Since Glass seemed more problematic, we wanted to take action there too. Tentatively planned for Hotfix 2.2.0.2, we will be replacing Glass with Prism. Tier 3 goes live tomorrow,  so we’ll continue to monitor feedback and make adjustments as needed.
As with all things in development, any of these forecast changes could be altered or delayed. For the most current information on our plans and progress, stay tuned for patch notes.

Week in and week out, Player Support is at the ready to lend a helping hand when issues arise in Destiny 2. This week, they have some vital information for those preparing to pick a side in the Allegiance quest. No, they’re not telling you to pledge to the Vanguard (even though you totally should), but making sure your experience is smooth and issue free.
This is their report.

Destiny 2 Hotfix 2.2.0.1
In last week’s Player Support Report, we highlighted an issue where some players’ weekly bounties for Ada-1 and Petra Venj did not refresh at the weekly reset, instead refreshing the following Sunday. With the conclusion of this week’s maintenance, we expect this issue to be resolved.
In addition to this change, we’d like to also highlight the resolution of the following issues:

For the full list of issues resolved in Tuesday’s hotfix, players should visit the Destiny 2 Hotfix 2.2.0.1 patch notes.
Known Issue Callout: Losing Allegiance Pursuits
This week, players who own the Destiny 2: Forsaken Annual Pass are being asked to make a choice; pledge to the Vanguard, or side with the Drifter.
Since this ultimatum has gone live, Destiny Player Support has monitored reports regarding an issue where players who make their choice while they have a full Pursuit inventory are not receiving either quest item, regardless of which side they chose.
We are currently working to resolve this issue in an upcoming hotfix. In the meantime, all players should ensure they have space available in their Pursuits inventory prior to accepting either of these quests from the Drifter. As always, we’ll be sure to sound off with more information when it's available.
Destiny 2 Season of the Drifter Known Issues
Whether you choose to stand tall with the Vanguard or join the Drifter’s crew, we’ve got the details you need on the latest known issues in Destiny 2.

For the running list of all issues tracked by Destiny Player Support, players are encouraged to visit our Destiny 2 Known Issues help page. Players who encounter other issues should report to the #Help forum.
When reporting a gameplay issue, providing screenshots, captured video, or repro steps will help Destiny Player Support investigate your report.

You ever wonder what the Cabal watch for entertainment? Maybe they tune in to Crucible matches to watch Guardians beat each other's faces in. Or maybe they jump on bungie.net to watch some funny videos on the Creations page.
Transmat Firing!
Movie of the Week: What’d you expect?

Honorable Mention: I've got a fever...

Honorable Mention: Ok seriously, how many of these are there?

If you’d like a chance at the Lens of Fate emblem, be sure to submit your footage to the Community Creations portal on bungie.net.
This week is home to villainous weaponry, reckonings, and invitations to the unknown. We’re excited to watch as you dive through the content, and we still have more to come throughout Season of the Drifter. Gambit Prime Private Matches, Arc week, and the Revelry are on the approach. Until then, we have a few more Bungie Bounties to challenge you with and more maps coming into rotation in Gambit Prime.

March 20, 10 AM PDT: PS4 Bungie Bounty
April 3, 10 AM PDT: PC Bungie Bounty
Next week, I’ll be leading the team on PlayStation 4. Find us, beat us, and win the Sign of Mutual Combat emblem. If you’d rather sit back and watch the carnage, tune in to Twitch.tv/Bungie for the fun.
Until then, you can find me building out my Sentry set. Somebody has to keep the Blockers clear and take down those pesky invaders…
Oh, and before we go, check out this stellar community artwork from IsubomoAriko. It's absolutely amazing! 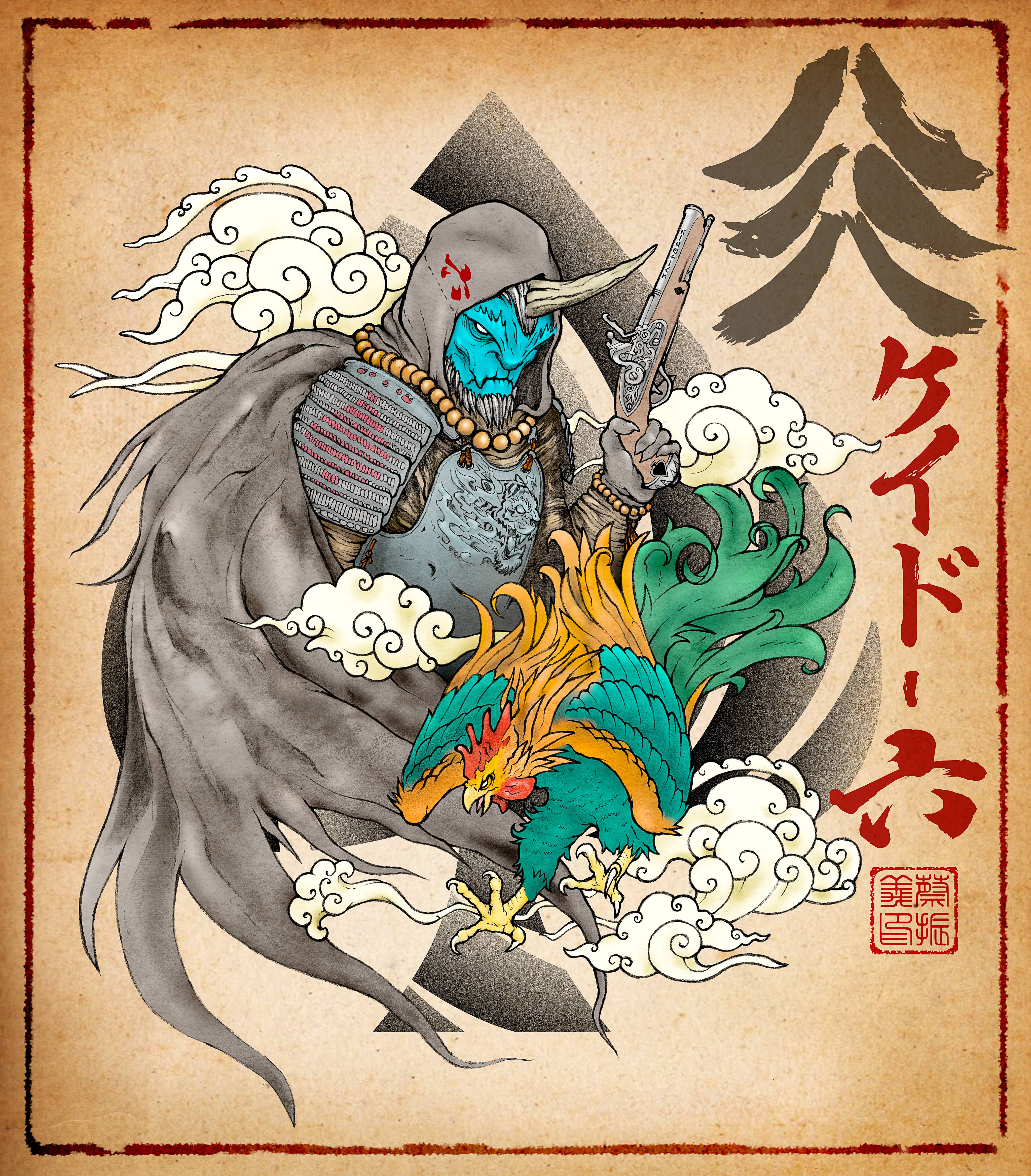