Jul 19, 2018 - Cozmo
This week at Bungie, we released a prestigious update to Destiny 2.
It’s been another busy week. We deployed Update 1.2.3, kicked off a World First raid race, and started up the last Faction Rallies of Season 3. All on the same day!
You can read the full patch notes to get all of the details on what has changed. We also whipped up another Dev Insight video that dives into what’s new and what else is coming with the Solstice of Heroes event this summer.

Along with the news and commentary about the update, we also showed off what you’ll earn in the Solstice of Heroes. The event starts on July 31 and is available to all players of Destiny 2.

We had a double serving of World First runs this week. Tuesday featured Prestige Eater of Worlds, and Wednesday followed up with Prestige Spire of Stars. Players already knew the mechanics and were at max Power, so it was just a matter of who could execute the quickest with the loadouts and modifier we threw at you. Here are the results…

Congratulations to these elite fireteams who rose above the rest. These races were close—Spire of Stars saw the top two teams finish within a minute of each other. The next World First race is coming in September. Maybe your team will be the next to be honored here.

Future War Cult is still riding high from the last Faction Rallies, where they claimed their first victory ever. Dead Orbit won the first event of this season, so New Monarchy should be eager to reclaim the crown they wore many times last season. Who do you think is going to win? Go to the Tower to cast your vote.
This is the final Faction Rallies event of Season 3. Grab up any gear you haven’t collected yet. Here is a look at what you can expect through the month of July: 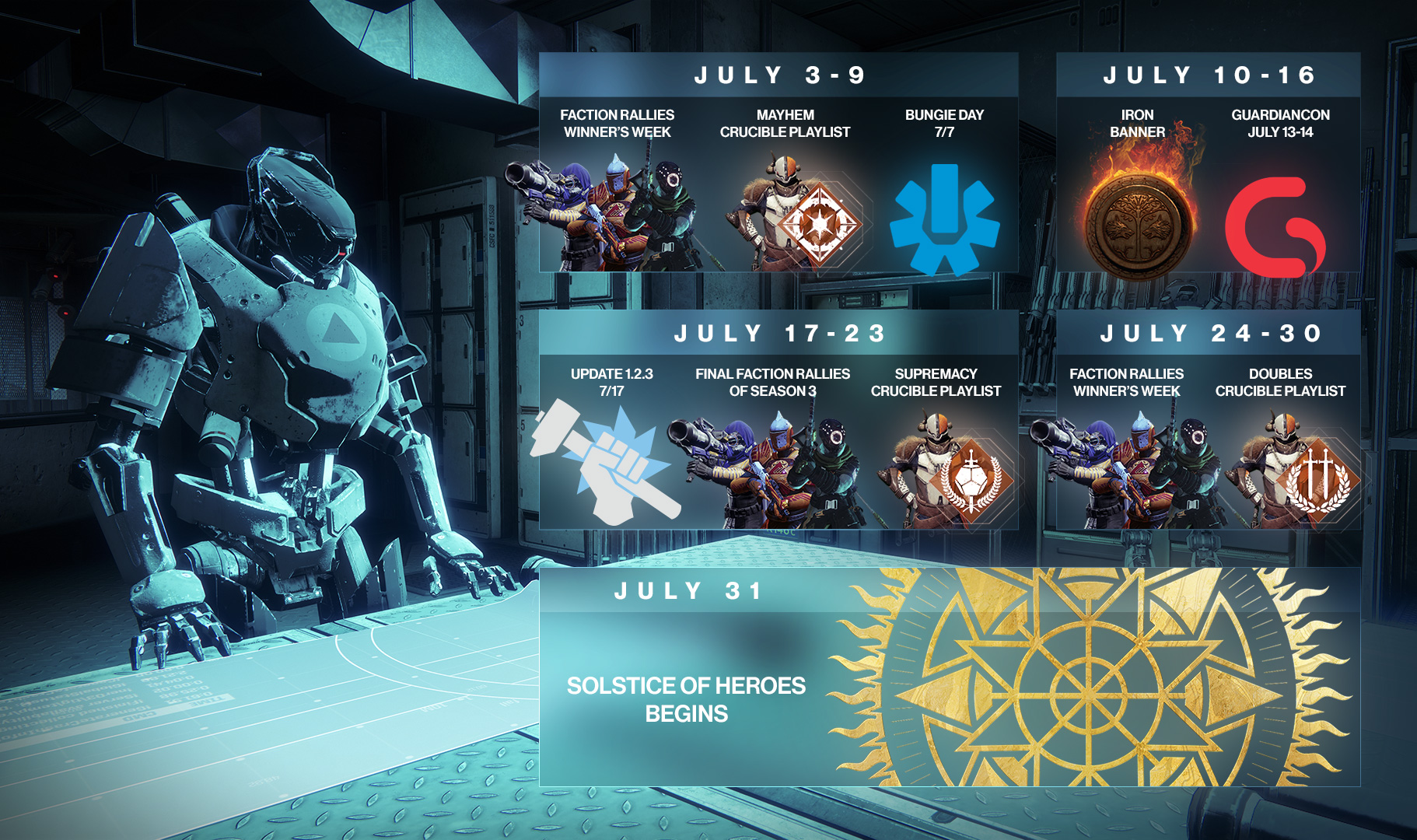 We returned from Tampa earlier this week with full hearts and sweaty clothes. Our away team went down to GuardianCon to show off Gambit to a sea of players, many of whom were excited to try out the new mode. It was great to meet everyone who attended and to hear stories of clans meeting in person for the first time and the impact Destiny has had on some players. All together, the event raised $2.7 million for St. Jude's Children's Research Hospital. It was an astonishing outpouring of generosity. Thank you to everyone who donated.
While we were there, we put Gambit on the mainstage in a friendly competition to see who could take home the really tall trophy we made. Everyone played well, but team Gambiteers won in an exciting final match, in which one of the rounds left True Vanguard shocked and speechless. You can watch a replay of the event on the GuardianCon channel.
Here are a few moments from the event.

Day 2 of @GuardianCon is underway!

Invaders have arrived to give Gambit a try. pic.twitter.com/umymkBcTeZ

When the enemy team burns down their Primeval one second faster than yours.

Thank you to all who waited in line to play Gambit and to these Bungie team members who made it all happen.

You may have noticed we have a fancy new GIF. We are rebranding this section. Player Support Specialist Chris Alejo has the details.

Chris: Some of you may remember, in a bygone era, Bungie’s weekly blog was titled the “Bungie Weekly What’s Update.” In the age of Destiny, in partnership with our Destiny Operations Center, we took this name and began publishing a segment called “What’s Up, DOC?” The purpose of this segment was to inform Destiny players of known and emerging issues, as well as make official statements on the state of the Destiny service.
This segment has long since been authored by the Destiny Player Support team, but now we’re officially making it our own. Players can expect the same content and coverage that they’ve come to know in “What’s Up, DOC?”, but with a fresh coat of paint and a new identity. Our prime directive continues to be serving Destiny players.
Today, I’m proud to announce that this segment is donning a new name: the Player Support Report.
Destiny 2 Update 1.2.3
This week, we deployed Destiny 2 Update 1.2.3 to players. This update brought changes to the game experience, including Prestige raid lairs, new Exotic Masterworks, and Crucible playlist updates.
Since this update has gone live, two important issues have emerged that we’d like to bring to the attention of players:

[Editor’s Note: Weapons from Prestige raid lairs and armor from Solstice of Heroes were not intended to be infusion fodder for two reasons:
Players who have already done this can claim a duplicate of their weapon from their Weapon Collections, which will become available to all players when Forsaken launches on September 4, 2018.]
Players who have not yet done so should see the Destiny 2 Update 1.2.3 Patch Notes with full details on this update. For information on future updates, players should follow @BungieHelp on Twitter and monitor our support feed on help.Bungie.net.
Faction Rallies
Right now, Destiny 2 players are invited to participate in the final Faction Rallies event of Season 3. Players can pledge to Dead Orbit, Future War Cult, or New Monarchy for glory and rewards, but they should be reminded that all pledges are account-wide.
Players in search of more information on Faction Rallies should see our Faction Rallies Guide. Players who encounter game issues should report them to the #Help forum.
Bungie.net Emblem Codes
Over the past months, players have had the opportunity to earn exclusive Destiny 2 emblem codes by participating in special offers in the Bungie Store, as well as by playing Gambit at E3 and GuardianCon.
Players who have received these codes should visit our Code Redemption Guide for information on how they can redeem the codes. When redeeming Bungie.net codes, players should pay close attention to which account they are logged in with. Codes redeemed on unintended Bungie.net accounts will not be restored or returned.

Welcome to another edition of Movie of the Week. This is our chance to pick a few community-created videos and share them with a wider audience. The creators also get a special emblem for their excellence. If you want your shot, submit your video to the Creations page. Just make sure you tag the player names for all who contributed to the video in the description.
Here are this week’s winners.
Movie of the Week: Like a River

Honorable Mention: My Tractor Is Sexy

Before we go, here are last week’s top scores for the Nightfall. We seem to have some familiar faces in the top three each week. 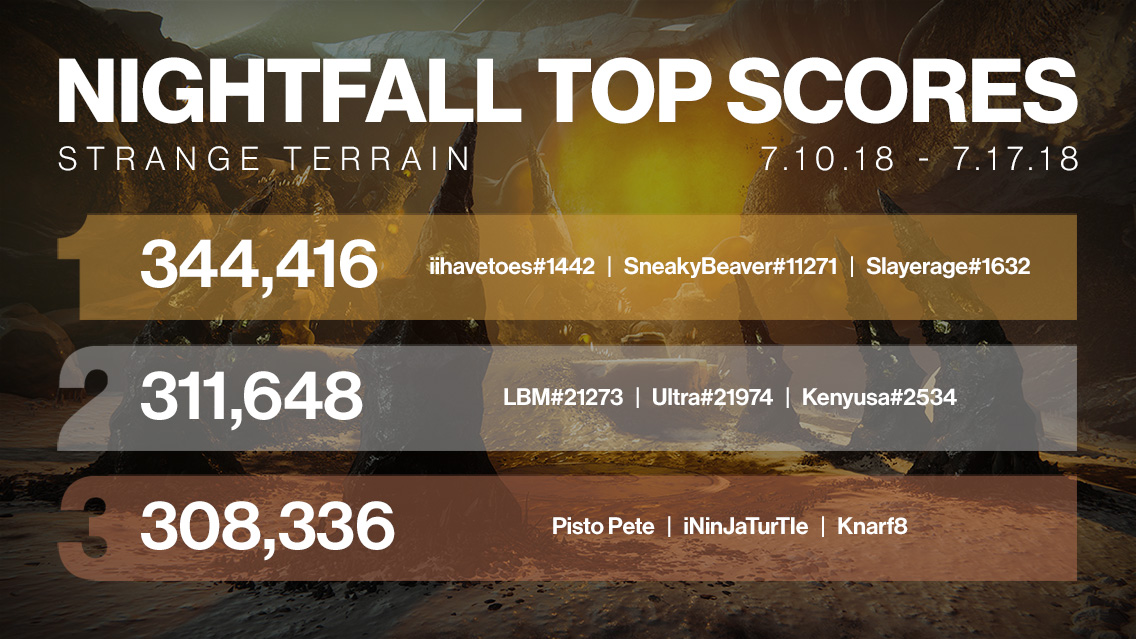 I’ve been out for a bit lately—went to visit the fam, then GuardianCon. It’s good to be back. This update is lighter than some, but we have a lot more we’ll want to talk about before the launch of Forsaken. We know you have burning questions about how exactly we’ll keep some of our promises regarding the new state of combat, and we’re working out details for how we’ll serve up those answers. Some of them will happen in real time on stream. Others will land right here, on a Thursday yet to come.
Keep your eyes on this space, and you’ll learn everything you need to know to take your first steps in avenging Cayde!
<3 Cozmo