While you fight for your very survival in three core activities, we’ll monitor the technology that brings us all together. There will be fun and games, but make no mistake: This is a test!
Your participation is a critical step on our road to launch. To date, thousands of players have sampled the action in Destiny 2. We’re about to expand that audience to include millions of brave Beta testers. Now, it’s your turn to play.
What you should expect:

Homecoming: The opening mission and cinematics from Destiny 2’s Campaign.

Countdown: Enter the Crucible to battle other Guardians in a brand new mode. Attack or Defend the base on a new map custom-built to support this new game type.
Control: The original standard for Crucible combat is back, with some impactful changes. Control the zones on another new map built with this objective in mind.
The Inverted Spire: Strike at the heart of a Vex stronghold. Bring two willing allies, or let Matchmaking introduce you to a Fireteam of Guardians.
New Subclasses: The new fighting style for each Class will be at the ready. Choose from the Dawnblade Warlock, Arcstrider Hunter, or Sentinel Titan.
The Farm: For one hour, on Sunday, July 23, we’re inviting you to tour the new social space in Destiny 2. Starting at 10AM Pacific, you’re welcome to kick the ball into the net or befriend a chicken. Most vendors and services will be offline. Our goals are to see how many of you it can accommodate at once.

What you should not expect:

Clan Support: It’s true that Clans will be supported in Destiny 2, but those features are not a part of this test.
Character Progression: You’ll receive rewards for defeating your enemies – be they Cabal, Vex, or other Guardians – but the Beta does not represent how your characters will evolve in Destiny 2.
Character Continuity: Destiny 2 is a fresh start. Nothing we do in the Beta will carry over to the final version of the game on September 6. Of course, for every rule, there is an exception…

If you throw down with us in the Destiny 2 Beta, this Emblem will be waiting for you in September. This is our gesture of thanks for helping us get ready for launch. It will mark you as a volunteer member of the development team. They’ll say “How can I get that?” You’ll say “You had to be there.” 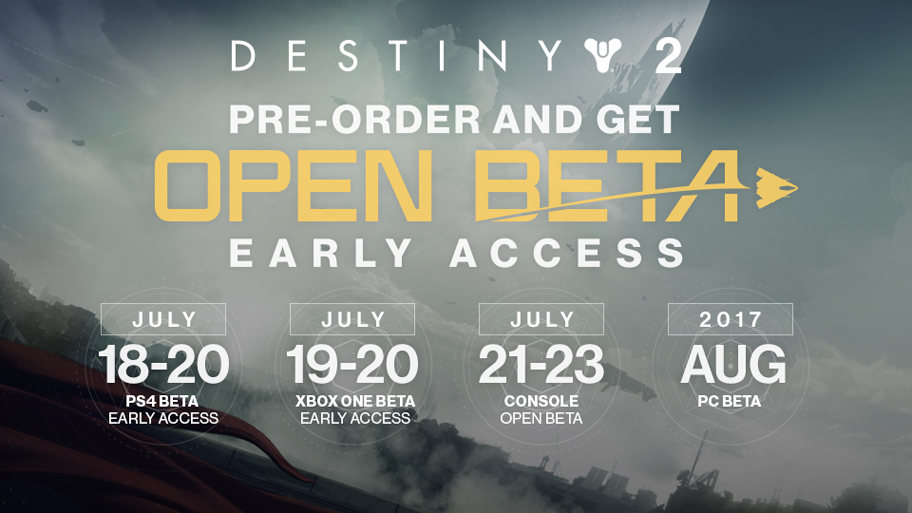 The Red Legion come knocking on July 21. If you want to kick out the unwelcome mat before then, pre-order to gain access a day or two early. This is your first dance with a new enemy.
And, if you’re one of our new friends who refuses to play Destiny 2 anywhere but on your PC, we’re still working to enlist you as a Beta Tester in late August.
Playing Chicken

They are the intrepid stewards of Destiny Player Support. They preside over a menagerie of error codes. Their mission is to keep all those pesky critters in their place. When Chickens run amuck, they fly into action.
This is their report.

Eververse Issues: Resolved
From July 1-3, players were impacted by an issue where purchased Silver, Level 25 or Level 40 Class Packs were not reflected properly to their accounts. This issue has since been resolved.
If you believe to have been impacted by this issue, please follow these troubleshooting steps:
If you continue to encounter issues receiving purchased Silver or Class Packs, please visit the Silver and Eververse Guided Support to submit a Contact Form to Destiny Player Support for investigation.
Error Codes: Chicken and Olive
Since July 4, we have been monitoring player reports of an increase in error codes Chicken and Olive. These errors were being caused by issues impacting Destiny Service hardware, which have potentially been resolved. Reports of these errors have decreased since July 5, but we are continuing to monitor player reports to ensure service stability.
If you encounter either of these error codes while playing Destiny, your first troubleshooting step is to ensure your home network is properly configured for Destiny gameplay by following our Network Troubleshooting Guide.
If you continue to encounter Chicken or Olive error codes, please post a report to our #Help forum.
Destiny 2 Memorialization Emblems: Legacy Console Accounts
Last week, we answered some of the most frequently answered questions concerning Destiny 2 Memorialization Emblem Qualifications. One question concerning Legacy Console Qualifications required additional investigation by DPS prior to being given an official answer:

A: Yes. Players who are currently playing Destiny 1 on PlayStation 3 or Xbox 360 are required to sign in to a PlayStation 4 or Xbox One and perform an Account Import to qualify for Memorialization Emblems in Destiny 2. Accounts may only be imported to consoles within the same console family. For additional information concerning Legacy Consoles and the Account Import process, please see our Legacy Console Guided Support.

Scopes and Cameras
The face that launched a thousand selfies at GuardianCon is back at his command post this week. Ever watchful for people he can elevate to legendary status, he’s got a fresh target package. He’s a man of few words, but swift and decisive action. Get set to mark a bounty on your map and set your browser for fun.

Cozmo: Bonjour! Our Bounty this week is ZombiesFaktory. They will be operating out of France, so this will be a prime opportunity for Guardians in the surrounding area to get their shot at the prized Emblem.

The Emblem you seek is the Sign of Opposing Will. Securing it is simple. Match with ZombiesFaktory and win. It doesn’t matter if you are their friend or their foes, if you are in their game and win the Emblem is yours. For more details check out our Bungie Bounty FAQ.

Cozmo: Let’s skip the pleasantries and fast-forward straight to the movies. We found these treasures on the Creations page. The creators win an Emblem.

Tomorrow is Bungie Day.
No, we didn’t invent a holiday to glorify ourselves. It’s a ritual created by the community. Like all of your best traditions, we’re happy to help them continue to burn bright. Come back tomorrow. We’ll have some ways for you to celebrate and express yourselves.
We might even have a Beta code to hand out to those of you who outshine your fellow citizens.
DeeJ, out.