Nov 14, 2019 - A_dmg04
This week at Bungie, a celebration is coming to a close.
We’re entering the final stretch of Festival of the Lost. Eva Levante has been dishing out treats for weeks, but she’s got a final trick up her sleeve. We won’t spoil the fun, though. That’s for you to discover on your own.
If you haven’t collected all of your masks or completed your Triumphs, you have until the reset on Tuesday, November 19 to fill out your collection. Momentum Control will be available through the end of the event, so if you’re looking to round out your Jade Rabbit catalyst, get to it. Momentum will be on rotation again in the future, so stay tuned for announcements. 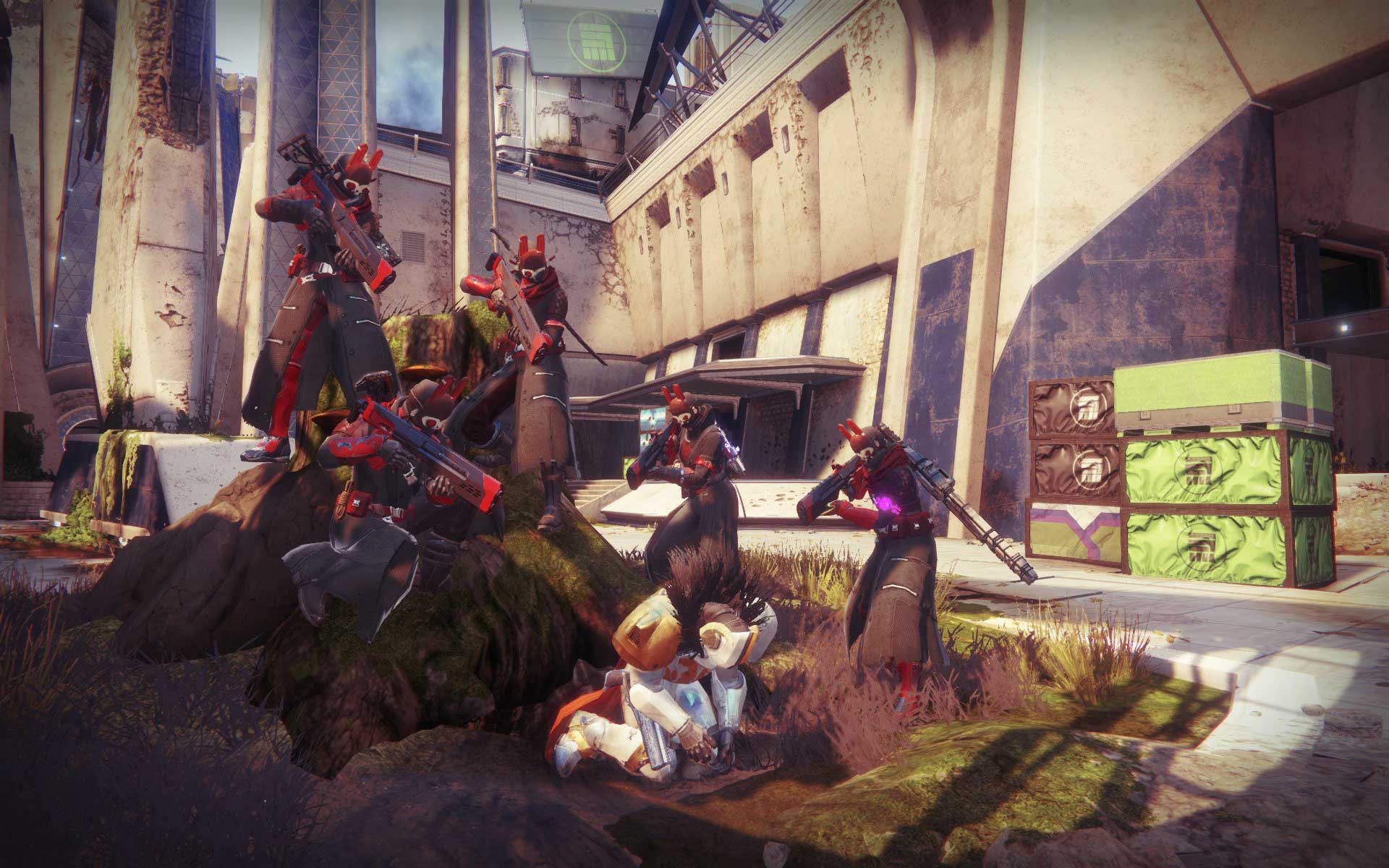 Throughout the event, we’ve been sharing our favorite Guardian costumes. Here’s a quick roundup of the fun. If you have any last-minute submissions in hopes of earning the Levante Prize emblem, be sure to submit your costume to the Creations page on Bungie.net.
The Pumpkin Nightmare 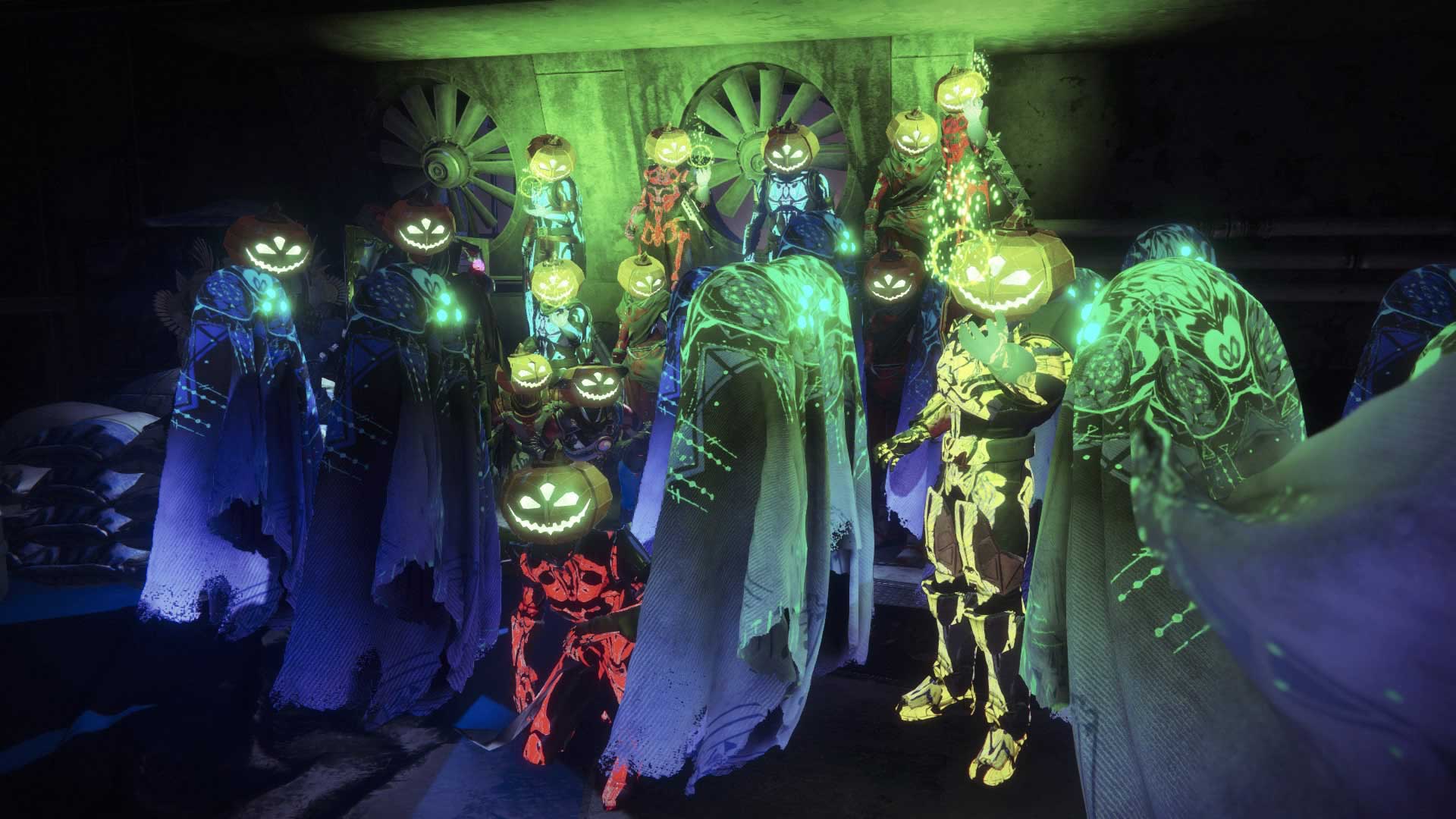 Darkness in the Crucible 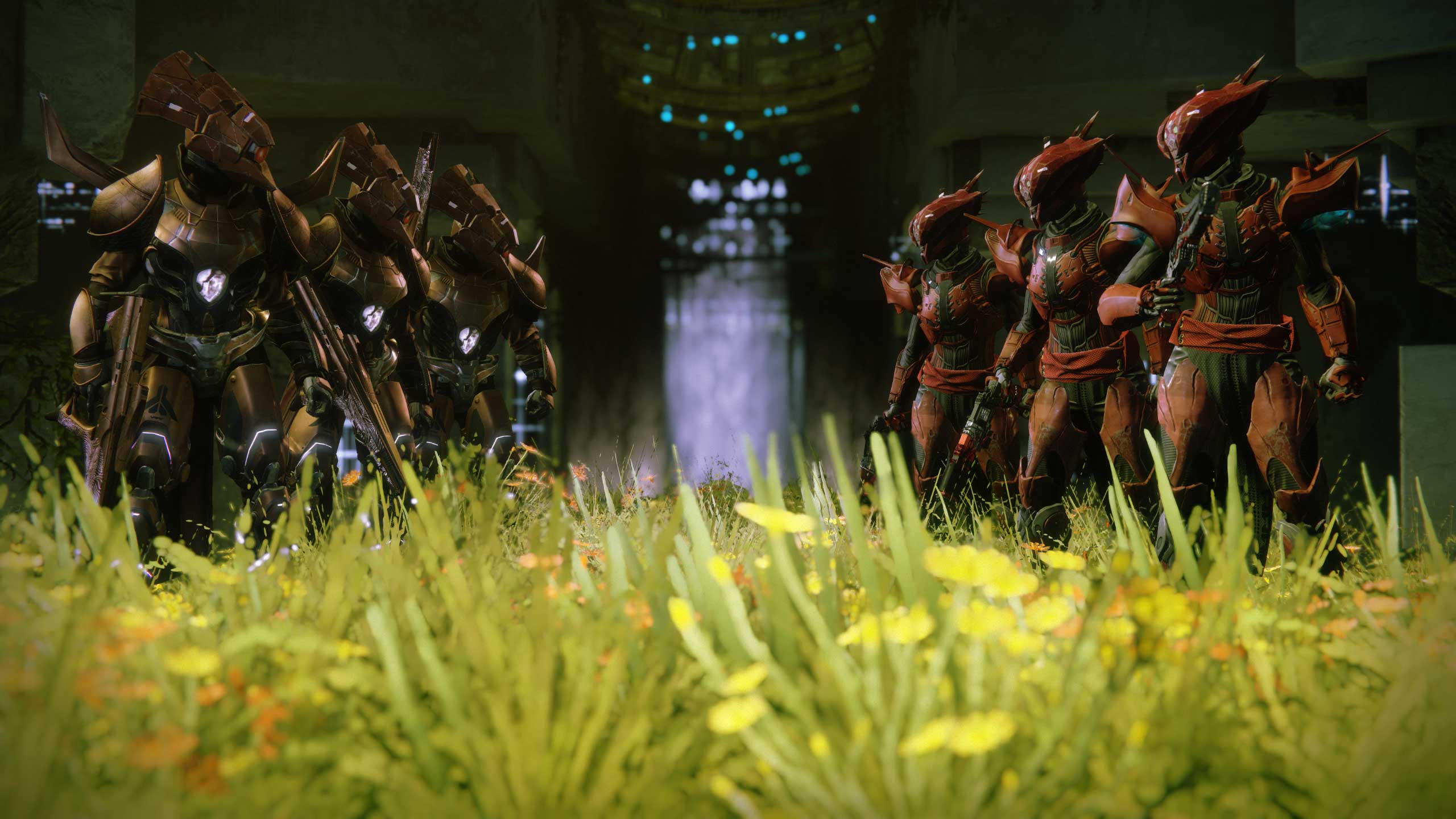 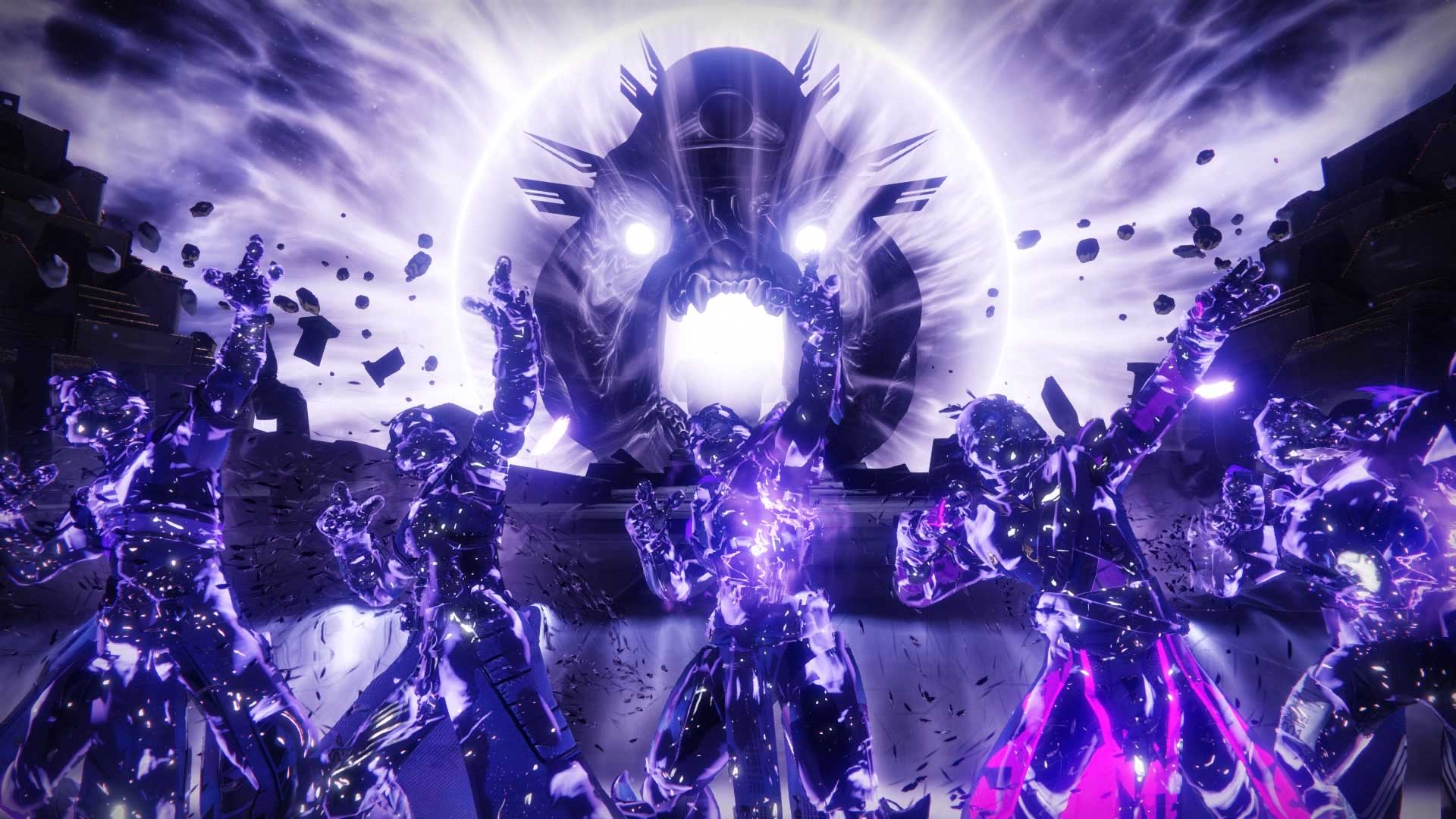 To ensure every Guardian feels at home, we’ve been putting more focus on Destiny’s global community. No matter your locale, your voice is important to us. What began with region specific Twitter accounts has evolved into a new community initiative. This week, we’d like to take the opportunity to introduce the first two international members on the Community team.
Loïc:

“Bonjour", Guardians! Epyon here. I'm the French Community Manager, which means that not only will I have the pleasure to serve the Guardians from France, but also to provide proper bread to Dmg04. And when I say "proper bread", I obviously mean "French bread". Beside all the usual French clichés, what can I tell you? Until very recently, I was a journalist, working at Jeuxvideo.com, the main video game media here in France. Among many other things, I've been reporting on Bungie and Destiny for more than six years now, which is pretty amazing given that this is mostly because of another Bungie creation that I once chose to write about. You know, that big dude with the green armor, who blows up ring worlds... I also had the privilege to co-host the French version of Fireteam Chat ("Escouade Chat" in French). And because it seems that I never had enough of Bungie, I even wrote a book that came out last year. And now, this? Joining Bungie? Life's crazy, friends.
My dear fellow French Guardians: we'll have many things to talk about in the coming weeks and months. I know you're all over the internet, gathered through Facebook groups, Discord channels, and so on. I'll come and find you, wherever you are to talk with you, and hear what you have to say about the game we all love so much. In the same time, be sure to make Bungie.net's forum your home. At least, another one. Use the checkbox, choose "French" as your language, and... "voilà !" I'll be there, reading, answering, and amplifying your voice at the studio. No matter what, don't hesitate to hit me up on Twitter (@Epyonzilla). Even if you're a Hunter or a Warlock.

Hi folks! My name is Maurice and I’ll be taking care of the German-speaking part of our community from now on. Some of you might know me as the former editor-in-chief and host of Inside PlayStation, and as one of the more vocal Destiny fans in the German games media. Being able to join Bungie as a dedicated Community Manager for the German-speaking audience is a bigger deal than it might seem at first glance: DACH-Guardians (Germany, Austria, and Switzerland) have traditionally been participating in the community by joining the English subreddit and organizing splinter-groups on other platforms. Our community has been all over the place, so to speak. I’ll be visiting you where you like to gather, but I’ll also be establishing a unified clubhouse that doesn’t come with a language barrier. If this is something you would like to participate in (sorry for the technical discourse), make sure to choose German as your language on your Bungie.net account, go to the forums and untick the English checkbox. And bitteschön: You’re now part of the club! Direct line to the studio and all.

There will be many things for me to figure along the way and I encourage you to do your part by letting me know how I can serve you best, and where my attention might be needed. Just use the forums or hit me up on Twitter @Maurice_BNG. Let’s build this thing together, one step at a time. As you might imagine I am over the Moon right now. And on it – chasing that Undying title. To quote an old friend of mine: THIS IS AMAZING!!!

These are our first two steps into a larger world. They won’t be the last introductions you see, as more teammates join us over time. Stay tuned.

As I mentioned above, Destiny’s community is large and varied. Everyone is a little different in terms of how they defeat the Darkness. We have heard a lot of stories over the years about conquering challenges, meeting new friends, and the various ways that Destiny has touched your lives. We’d like to hear more! We’ve opened up avenues to share your favorite Destiny experiences with us, both on Bungie.net and reddit. This isn’t a contest. It’s a way for us to get to know you better, and to hear about the kinds of in-game moments that have made the largest impact on you.
So if you’re up to it, share your most memorable moments of Destiny – anything that made you feel:
Thank you for being such an amazing community. We look forward to hearing more of your stories.

Over the last year, we’ve made various changes to the sandbox of Destiny 2. Some weapons have been brought down, some armor has been brought up, and the “meta” has shifted from class to class. Coming next Season, the sandbox will evolve once more. This week, we’ll be looking at two notorious items that you may have heard about.
From the Development team:
The Recluse
Many doubted The Recluse when it was first announced, but it has since proved to be resilient to being squashed. Although the precision damage modifier did not actually improve the efficacy of the weapon at its best, it did allow for fairly mindless spraying to be just as good as concentrated aiming. After considering various options on what to do with it, the decision was made to remove that part of the functionality and preserve its activation methods. The alternative was leaving in an effect we believe to be too strong for a Legendary weapon.
One-Eyed Mask
In a previous sandbox update, One-Eyed Mask received some tuning in how Vengeance was applied to Titans. Next Season, this perk will continue to provide health regeneration when defeating an opponent that has inflicted damage upon your Guardian, but it will no longer grant an overshield.
Additionally, the team is addressing some feedback concerning the newly released Xenophage Exotic:
Xenophage
Xenophage unintentionally shipped a little weak, so it’s getting a bump up in raw damage. Machine Guns have a higher ammunition capacity than other Heavy weapons, trading raw DPS for ease of use. Xenophage slides further towards other Heavy weapons such as Grenade Launchers in that aspect but didn’t get enough power back. This will correct that.
In the next few weeks, we’ll have further sandbox patch note previews, paired with some quality of life changes to things like Escalation Protocol Armor, bug fixes, and more.

Every day, Destiny Player Support is navigating the forums, identifying issues, and providing workarounds to those in need. They’ve got a good temperature of what’s going on, but they’re also keeping track of what’s to come. This week, they’ve got some info on upcoming deadlines.
This is their report:

FINAL WEEK: Festival of the Lost 2019
At the weekly reset this upcoming Tuesday, November 19, Festival of the Lost 2019 will conclude.
Players have until then to unlock the Braytech Werewolf, earn masks, and brush their teeth (or mastication module). From that point onward, the Haunted Forest will become unavailable and Eva Levante will once again depart from the Tower.
Also of note, during this final week Eva Levante is selling Festival Charms. For two hours after a Festival Charm is consumed, players will receive an increased number of Chocolate Strange Coins for activity completions.
For more information on this event, players should visit our official Festival of the Lost Guide.
Stadia and Cross Save
Also next week, Destiny 2: The Collection goes live with the launch of Stadia.
In the meantime, we recommend that players who wish to bring their existing Destiny 2 characters to the Stadia platform prepare Cross Save now. Once Stadia is live, players will need to link their Stadia account to their Bungie profile, and confirm that they wish for the account to be Cross Saved.
For more information, players should visit our Cross Save page.
ONE MONTH LEFT: Season of the Undying
As of this week, players have roughly one month left before Season of the Undying concludes.
Players who wish to unlock Seasonal ranks, Triumphs, and/or exclusive gear need to do so before maintenance begins on Tuesday, December 10.
We’d also like to take this opportunity to make players aware that, if incomplete, the following pursuits will be removed from players’ inventories once this season concludes:
For more information on what’s specific to Season of the Undying, players should see our overview page.
Destiny 2 Known Issues
Listed below are emergent issues being investigated in Destiny 2.
For the latest list of emergent issues, players should visit our Known Issues thread. Players who observe other issues should report them to the #Help forum.

We’ve been debating what the best Halloween candy is for the last few weeks, but I can firmly say (without acknowledging the obviously wrong opinions of my colleagues) that candy corn is the absolute worst. To get my mind off of this abomination of a “treat”, I’ve been watching some montages on the Community Creations page. Join me in cleansing your thoughts of this horrible candy.
Movie of the Week: Five Light Years

These players, blueberry included, are now the proud owners of our Year-3 MOTW emblem. If you’d like a shot, submit your creation here.
That’s a wrap, folks. I’m still on the mend from a 30-minute solo dungeon attempt, but I may try again this weekend.
Next week, we’re looking forward to the launch of Destiny 2 on Stadia! If you’ll be experiencing your first revive in the cold wastes of the Cosmodrome, we look forward to giving you a warm welcome – we’re kind of notorious for that as a community. If you’re a Guardian who will be extending your journey to this new platform, don’t forget to get linked up using Cross Save as you activate your account.
What bread are you currently chasing for Season of the Undying? A new title? Some last minute Festival masks? Sound off!
Cheers,
-Dmg04