Feb 22, 2018 - A_dmg04
This week at Bungie, the factions are rallying again. Future War Cult is aiming for its first win in the Faction Rallies event, but it won’t be taken easily. New Monarchy is eyeballing its third victory (in a row, mind you), with legions of dedicated players hitting the grind on public events, Crucible, and Lost Sectors. With a few new rewards to entice a change in pledges of loyalty, it’s up in the air as to who will claim victory. We’ll find out next week, once Faction Rallies comes to a conclusion and the Tower is decorated with the banners of the victor.

The most important element of making a plan is being open to the fact that it will change. We’ve updated the Destiny 2 Development Roadmap with some new information. Exotic repetition reduction and Nightfall Strike unique rewards have each been moved out to Destiny Update 1.1.4. Additionally, Exotic weapon and armor sandbox changes have been delayed to Destiny update 1.2.0, to grant proper time to test and implement these changes. 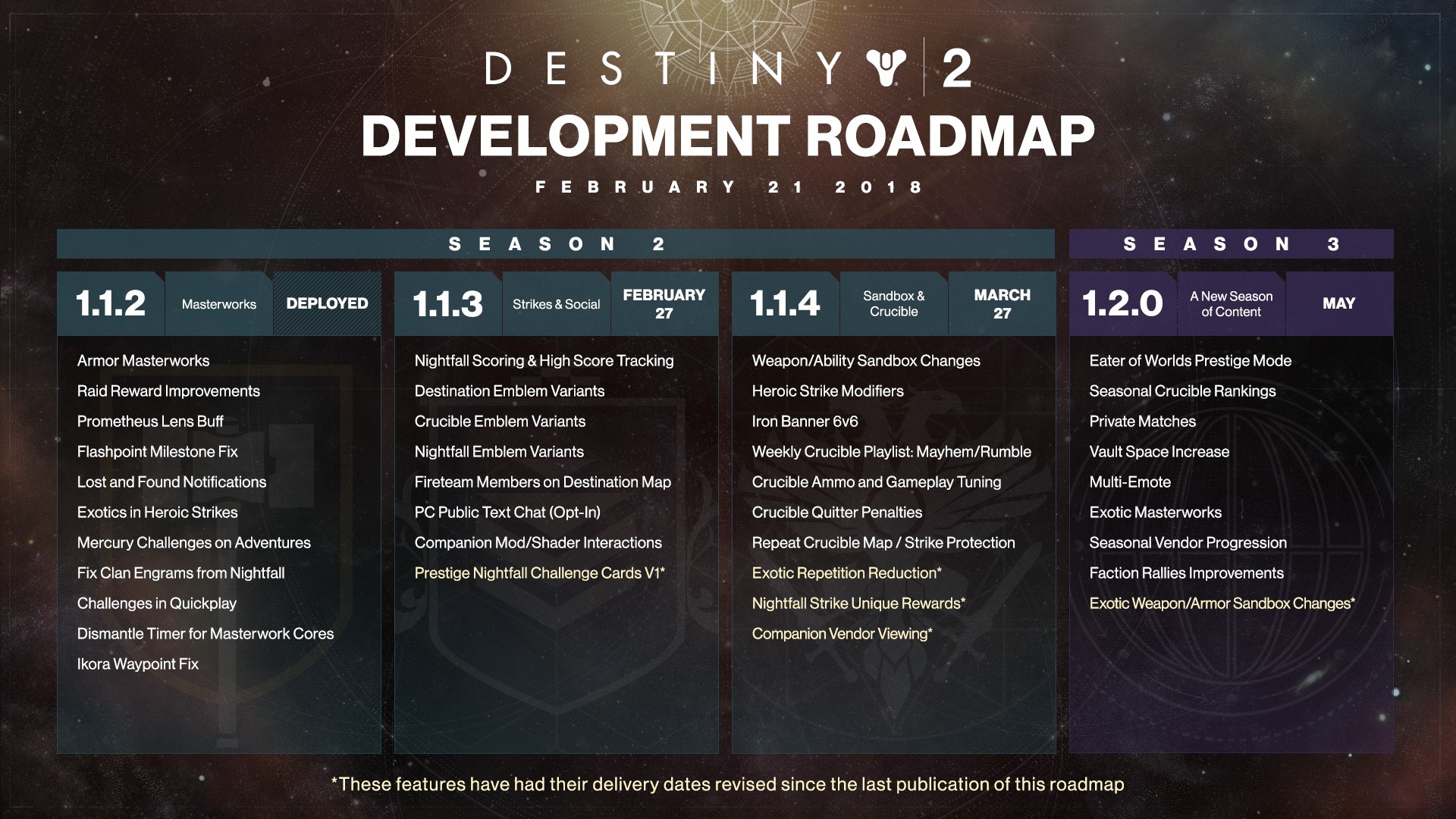 Teams are hard at work ensuring these upcoming features not only meet a proper quality bar, but also don’t endanger other aspects of the game with potential bugs or issues. We’ll keep you updated every step of the way to make sure you know when to expect items to be released.

Next week, Destiny update 1.1.3 will introduce Nightfall Strike Scoring, the first version of the Prestige Nightfall Challenge Card, and emblem variants. Two weeks ago, we went through how Nightfall Emblems are changing. Joining us again to go a bit deeper, here’s Senior Design Lead Tyson Green to talk about the upcoming emblem and aura changes:

Tyson: Emblems in Destiny have been positioned as a vanity collectible, with a few exceptional (and popular) emblems that reflect noteworthy achievements. In D2, we started to pivot emblems more towards the latter example by adding stat displays to some of them. Now, we want to go further in the direction of emblems as a means of exposing achievement.
First, we’re exposing more stats on emblems and making those emblems more available to players who want to display those stats. For example, the Crucible emblems that advertise wins or KDA can now be obtained directly from Shaxx after 10 Crucible rep packages (if you don’t get one earlier). We’re also deploying a new emblem that advertises your Crucible kills, which are broken down by class so you can see who find themselves in your crosshairs most often.

Second, we’re collapsing auras into emblems and removing them as standalone items. This means that existing Raid, Trials, and new Nightfall Emblems will provide the existing aura effects to players, and future emblems can also roll out new effects. These auras are conditional—for example, you still have to go Flawless or do a Prestige Clear to activate them. Some of these auras will also come with fireteam bonuses, so when they see that aura over you, they know who is giving them that benefit.

Lastly, we’re introducing variants to some emblems. If an Emblem indicates high achievement and lots of players use it, we didn’t want that to mean that everyone looks the same. But we still want achievement emblems to be recognizable as such. Variants are being introduced to allow visible achievement without losing the recognizable identity of the emblem. Some variants are unlocked via conditions—the new Crucible Kills Emblem unlocks some fun “class foe” variations after you down a thousand Guardians of that class. Others are drops from sources like destination chests or Nightfalls, and some of these might be quite rare. 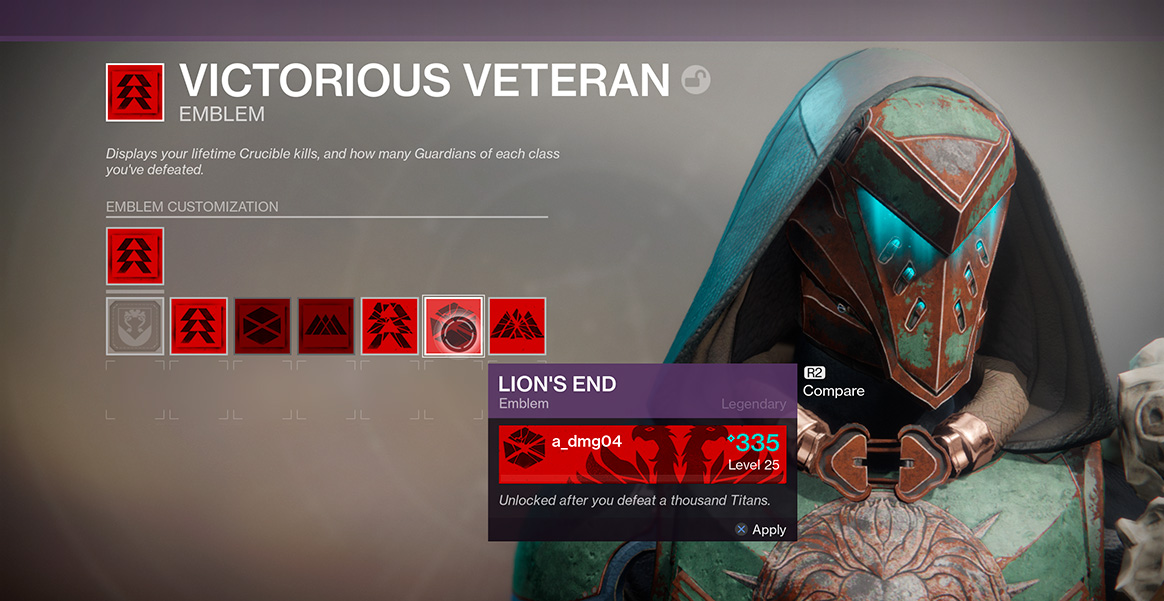 An example that ties this all together are the new Nightfall Emblems. Obtained by completing specific Nightfall Strikes, these emblems display your highest personal score in that Nightfall. In the future, we hope to display your clan’s highest score too. These emblems have several variants each, which drop from that specific Nightfall, but in some cases only above certain score thresholds (and we expect some to be quite rare.) And finally, these emblems enable the purple Nightfall Aura as well as a fireteam bonus to Vanguard Token drops, but only if your personal high score is above a par-score. That will start off at a value selected from internal playtests but we plan to adjust it based on your (the community’s) posted scores each time a Nightfall comes around. 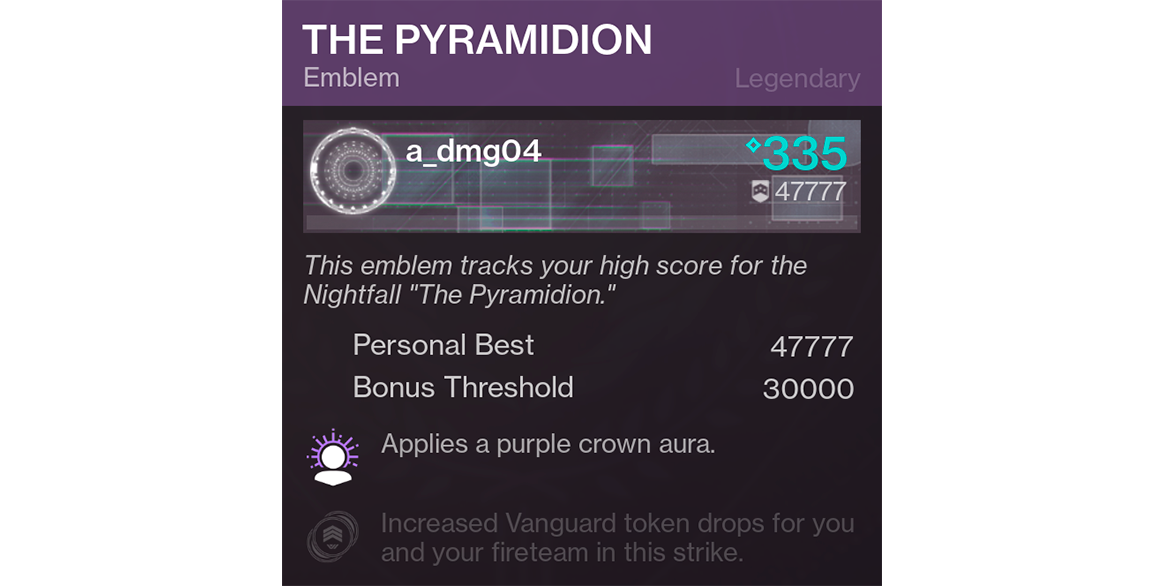 This is the first round of this new direction; we hope to do more, and to learn from your response to it. Future releases may revisit or add new emblems for underserved achievements, or more variants for popular emblems.

Whether it's at deployment prep time or immediately after an update has shipped, Destiny Player Support is always on the watch for reports of rising issues. You can find them in the #Help forum, distributing helpful articles or collecting information to escalate to internal teams for investigation.
This is their report.

Stay tuned for a full list of patch notes, which we expect to make available alongside Destiny Update 1.1.3.

Last week, I was out with the flu. It’s absolutely horrendous this year, and I highly recommend getting a flu shot at your earliest convenience. It did give me some time to sit back and watch a plethora of community created content on the Creations page, though. These movies have taken the top spot for Destiny related entertainment this week, and their creators will be granted an awesome emblem in-game for their troubles.
Movie of the Week: First we dance, then we fight

Honorable Mention: Run from Acrius
It’s always a pleasure to write the TWaB, and with this week’s announcement about my new gig, you’ll see me around these parts more often. We’re eager to hear your feedback on Nightfall Strike Scoring, and we will be watching for new threads in the #Feedback forum once the feature goes live. Thanks to all who stop by and share their thoughts, as player feedback is integral to the growth of Destiny 2. As we continue on the path of the roadmap, we’ll continue to keep you up to date on any forecast changes as they occur.
Thanks for playing, and we’ll see you next time.
Cheers,
-dmg04