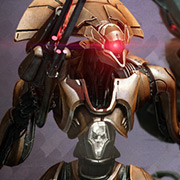 (WARNING: SPOILERS AHEAD) A Theory On The Newest Guardian

Hi all, so as some of you may have seen Ginsor has struck again finding a cutscene of that edgy bastard being resurrected by a Ghost. As you may know, when Guardians are resurrected they lose their memory, but Uldren has more of a lead than most people, ya know being the murderer of Cayde & all. You may also know that in the original D1 story, Uldren was instead known as The Crow, a rogue who’s personality was later used for Cayde. Of course however the story was rebooted & Uldren became the smug asshole that he was. What if Uldren learns about his life & actions during Forsaken, becomes disgusted by his past actions & tries to become a new man, officially becoming The Crow? I could be talking a bunch of baloney, but I find the idea really cool & intriguing. What do you think of it? See ya!
English
#destiny2 #GuessWhosBack #Spinfoil
Comentar Responder Iniciar tópico
Denunciar