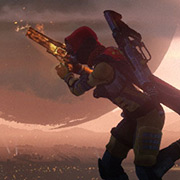 Offstar1029
Yeah it's really bad. Pre Shadowkeep it was annoying but post Shadowkeep it's god awful. And I don't know if other people have experienced it but for me at least Season of the Dawn has gotten even worse somehow. Like when I'm in the menu and I'm trying to change mods it so bad it's not even funny. [url]https://youtu.be/poUnzRvuNZo?t=12s[/url] This should not be happening.
English
Comentar Respuesta Abrir tema
Denunciar