Jul 30, 2015 - DeeJ
This week at Bungie we’re inviting you to gaze with us, deep into the Dreadnaught.
Perhaps “daring” would be more appropriate than “inviting.” The space-faring fortress of destruction is far from hospitable. The Taken King himself is, after all, invading our solar system to avenge the death of his brood. You’re not invited. You’ll have to crash the party. 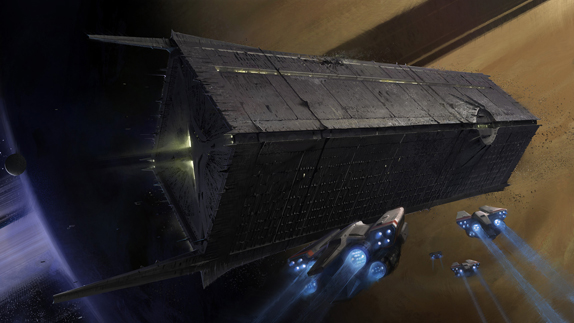 Conceptually, we’ve dreamed of facing the Hive on their own ground for a long time. With the development of Destiny: The Taken King, we’ve had the chance to fully realize the Dreadnaught. Before you hurl yourself headlong into Year Two, we’re going to arm you with a little intel, courtesy of a developer-led scouting mission. Senior Artist Andrew Hopps leads us off with an excerpt from the origin story of the Dreadnaught.

Andrew: It was important to us that you would feel the scale as you moved through the hulls of the Dreadnaught, never sure about what to expect as large spaces condensed to claustrophobic tunnels before revealing entirely new areas of the ship. A sense of wonder about the unknown is what drove a lot of the spatial design. It was an incredibly fun challenge to find the right balance between a mysterious tomb ship and the flagship for the Taken fleet - to capture the idea of this unfathomable threat, a monstrous spaceship captained by the Taken King, yet filled with vast caverns and unknown passages. I can't wait for players to explore and discover all of its secrets. 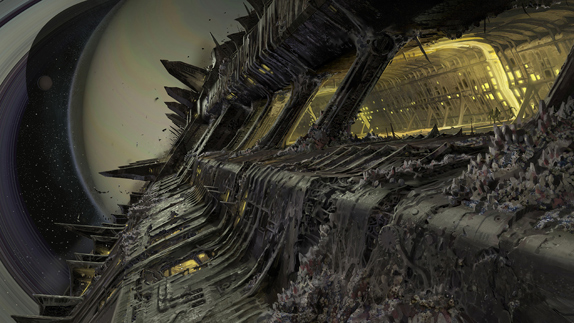 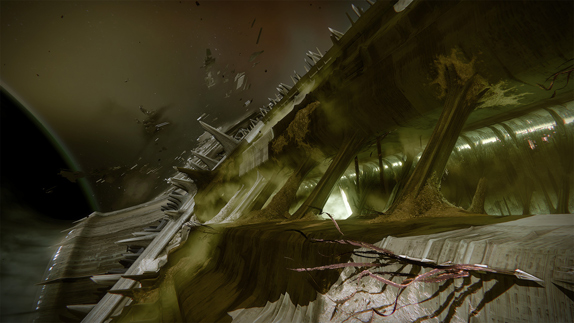 The Dreadnaught allowed us to sprinkle in some unique lighting dynamics to flavor the alien-ness of the Hive! – Madison Parker, Artist
CONCEPT 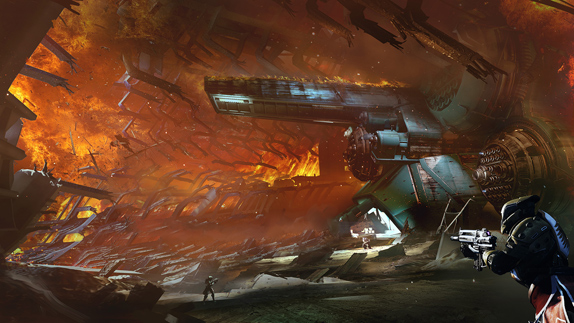 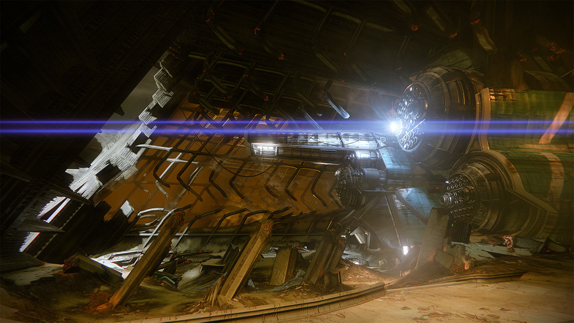 The Dreadnaught offered some opportunities for unique compositions and memorable views that couldn’t have been done elsewhere. – Josh Markham, Artist
CONCEPT 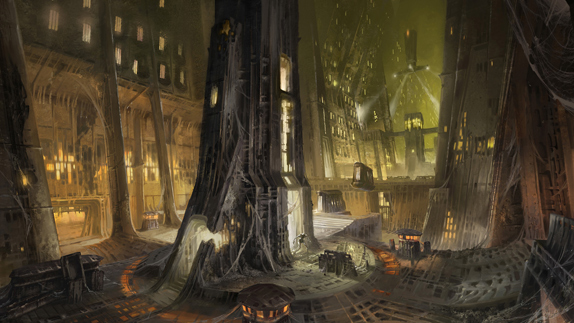 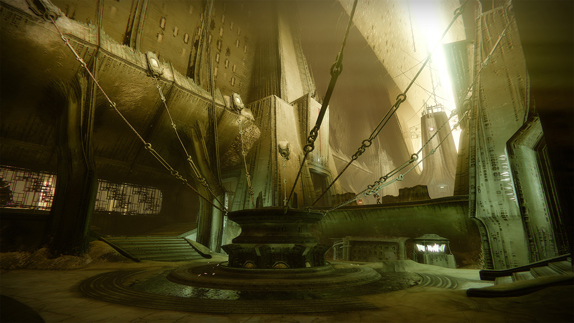 One of the biggest challenges we faced was making the Dreadnaught feel unsettling and uninviting while still making it a place people would want to visit and spend a lot of time exploring. – Mike Poe, Lead Lighting Artist
CONCEPT 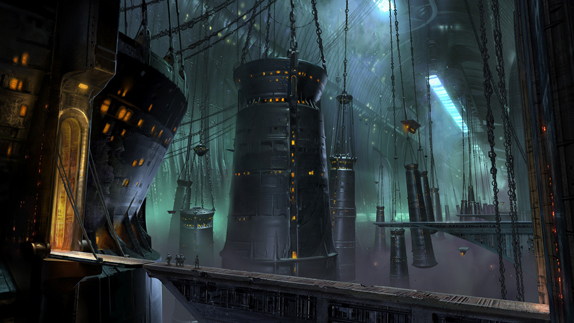 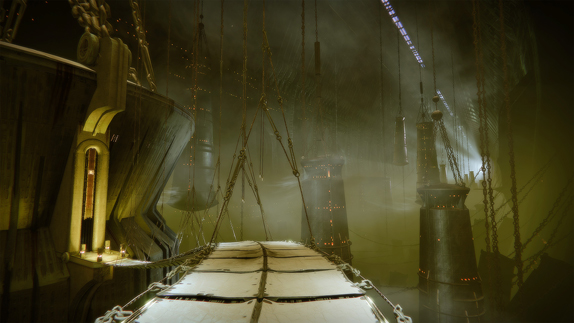 The Dreadnaught is a dark and mysterious space, filled with lots of very interesting atmospherics and ethereal lighting effects. From the perspective of a content creator, you dream of landscapes such as these. –Andrew Baker, Senior Artist
IN-GAME: 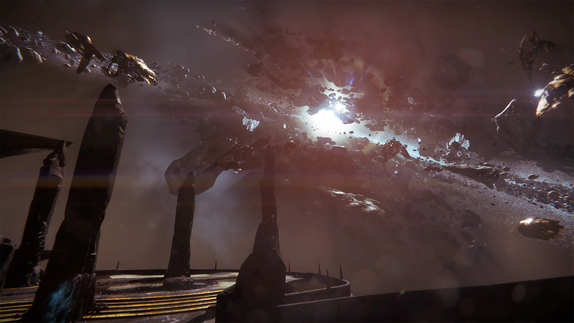 The opportunity to create the vista from inside Saturn’s rings was a dream come true. Creating the illusion that the player is within the ring plane with all that ice visible with a huge sense of depth was a really fun challenge. – Mark Goldsworthy, Staff Artist
As well as being a focal point for the story campaign in The Taken King, the Dreadnaught will also be a centerpiece of The Taken War, a progression that extends well beyond the traditional storyline. It will also provide new ground to explore and Patrol. In that regard, like The Taken King itself, it represents a big leap forward.
Designer Ben Wommack recalls designing the action that fills the Dreadnaught:

Ben: Way back during the planning of the Dreadnaught’s design, Luke Smith challenged us to create “an inscrutable loot-filled fortress.” That challenge was an awesome piece of direction, and went a long way towards inspiring our efforts. We had an opportunity to improve upon the design of our worlds in Destiny, and the results are evidence of how excited this made us.

Ben and the rest of the Open World Design team extended the boundaries of action and adventure within the Dreadnaught in the following directions:
More things to do

Ben: We’ve created a suite of new mechanics and woven them into the Patrol mode. Every week, every day even, it will draw you back to fight through to its depths for loot and glory. Expect to find new Bounties, Patrol Missions, and Public Events both large and small—some of which you can even instigate yourself, if you can discover how.

Ben: The Dreadnaught has its secrets—you’ll need to return again and again to solve them all and acquire the rewards we created for doing so. There are hidden treasures and bosses waiting to be found, and it won’t be apparent how to access them the first time you go exploring. We’ve laid out a lot of breadcrumb trails though, as you fight your way through the ship. So follow the clues you’re given, face the challenges you can find, and earn that sweet loot!

Ben: We play a LOT of Destiny around here. As a result we’re always designing new ways to challenge players. Within Oryx’s behemoth ship, you’ll likely find more challenging Public Events than anything else you’ve attempted before on Patrol. How to succeed won’t be obvious at first, but the rewards will be worth your effort. Get ready to fight bosses and encounters in surprising combinations of circumstances, and look to your fellow Guardians for help. Patrol is no longer easy mode—we should really get a Twitch stream going before launch to show what I mean.

Speaking of new bosses, Artist Corinne Scrivens brought this hideous creation to life. You’ll face this terror in a Strike that takes place on board the Dreadnaught.
Meet Darkblade. 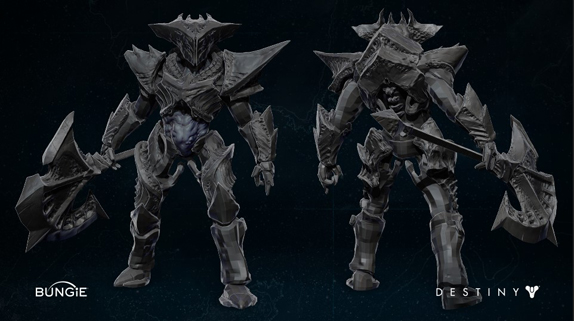 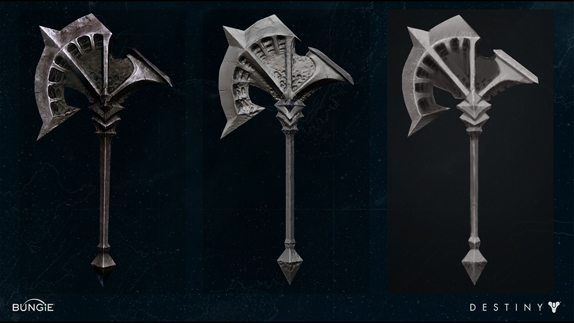 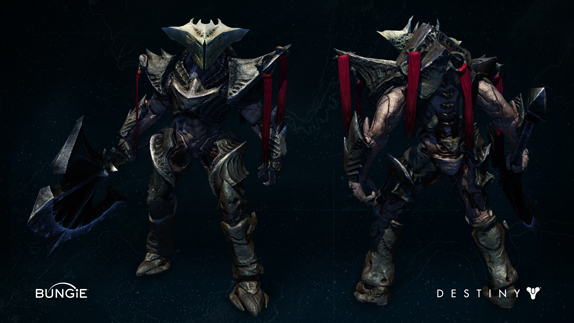 The Darkblade along with many other Hive abominations are waiting for you on board the Dreadnaught. Oryx has built an army for them to lead, bristling with combatants that were taken from our world, twisted by the Darkness, and sent back to prevent you from looting their fortress.
Ben did have a great idea. We should crack open this ship and storm its depths on Twitch sometime between now and September 15th. Stay tuned for more information on when you’ll be invited to explore the depths of this enemy lair even deeper, as we hold court with Oryx.
We’ll do it live.
The Envelope Please
For the past week, we’ve been loving the Destiny Year One Art Contest. Seeing all the art pour into the new Creations page on Bungie.net has been awesome. The community that plays this game is awesome – as creative as you are brave.
User Experience Lead David Sinclair sees to it that Bungie.net is a place that enables the community to socialize with us and each other. Building a new place for you to shine was his idea. Thus, we’ve left the final judging to him. Here were our favorite entries across a variety of categories.
Click thru to embiggen!
"F I R E T E A M” by Mr Colton 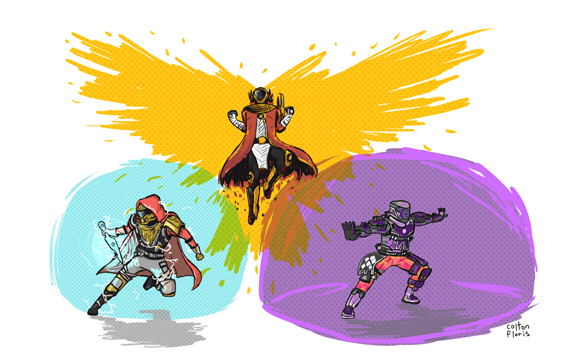 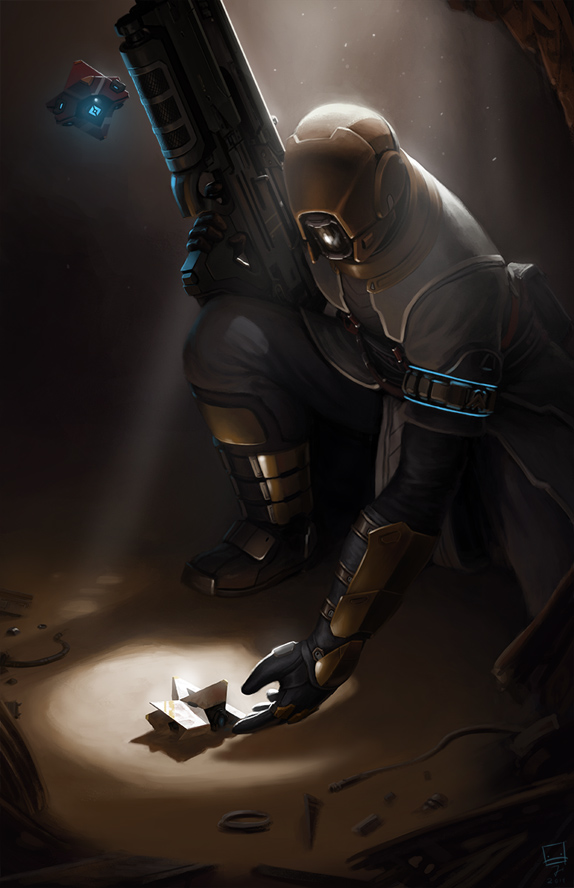 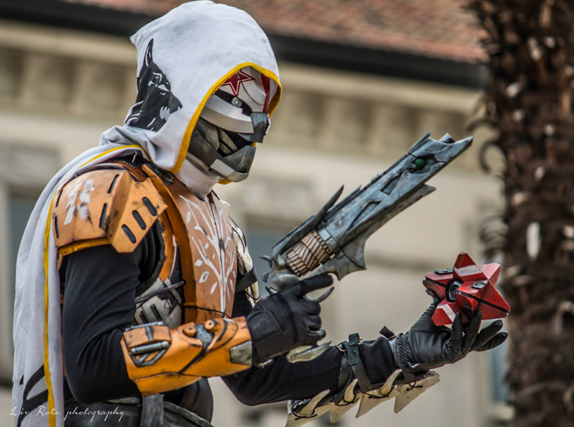 "My Favourite Thing” by danciao 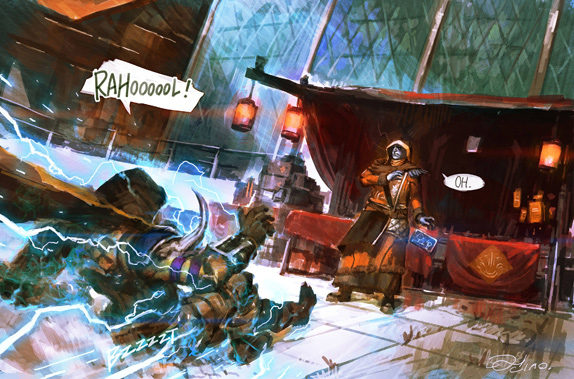 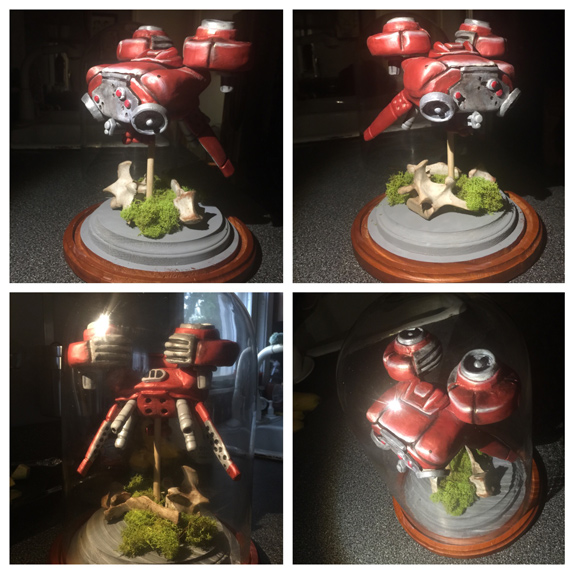 “Remembering Your First Raid” by HoboDeathK 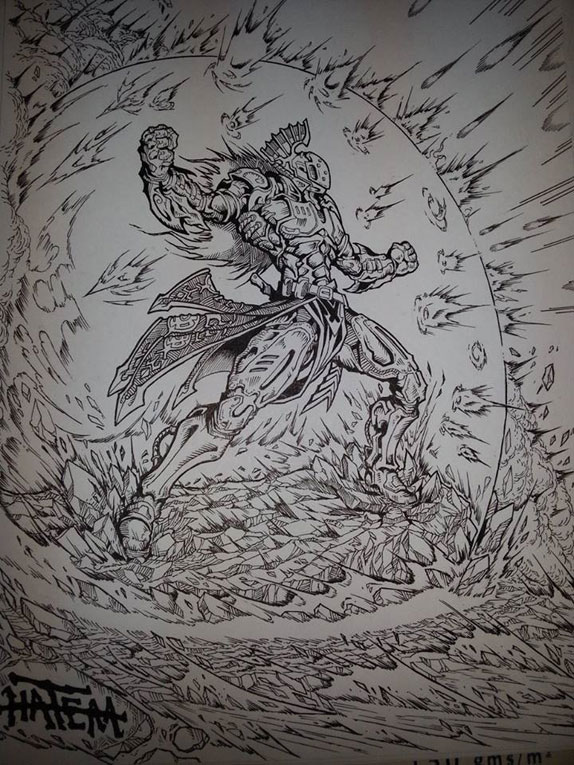 Each of the creators behind these works has scored a Collector’s Edition for Destiny: The Taken King. And let’s not forget the fifty Blacksmith Shaders we promised. Starting now, we’ll begin the process of tracking down the fifty creators whose work was given the most Light over the course of the past week. We’ll be in touch.
There is so much more incredible art on display. We’ll make a habit of sharing it around from now on. If you want your work seen by the Bungie community where it browses (Facebook/Twitter/Instagram), show it to us here.
Justice
We’re committed to protecting Destiny against cheaters. Enjoy your game. Just play it fair. That’s all we ask. Short of your own commitment to honor, we’ll taken action ourselves. It’s not a thing we enjoy doing – and certainly something we’ll never quantify or describe in agonizing detail. The damned shall remain anonymous – their nefarious actions a mystery.
We know you want justice. We’ve seen the chatter. We’ve read the reports. Yesterday and today, our Security Response Team has restricted access to the Crucible by the worst offenders among us all.
We started with a look at the most notorious cheaters that had been reported by other players. After a cross-reference against our own player-data, we gave the Banhammer a mighty swing. Contained in its blast radius were hundreds of people who have manipulated network traffic. If you don’t know what that means, we love you. Never change.
Cheating will not be tolerated, Guardians. The Destiny Community is a part of this process. Your finest weapons in the fight against cheaters are the reporting tools built right into the game. Submit a report when and where you detect shenanigans. Shaming your offenders in a video might feel good, but it doesn’t factor into our process for passing down a guilty verdict – and it might get you in trouble with the moderators of your favorite Guardian clubhouse! Issue a report. We’re watching and monitoring.
Now get out there and seek out a fair fight, assuming you still have the privilege to do so.
The Guardians Toolbox

Want to know more about the health of the Destiny network and what we’re doing to keep it strong? Destiny Player Support is reading Topics on the #Help forum posted from your region of the world.

DPS: On the subject of bans and restrictions, Destiny Player Support wants you to know that no one has been or will be banned/restricted for receiving a general networking error. You can brush up on our updated Account Restriction & Banning Policies.

We’d like to remind everyone of the best way to do your part to raise awareness of other Guardian’s behavior. The in-game reporting tool allows you leave feedback on other Guardians, for either influencing positive or negative experiences in game. Using this tool helps direct the User Research & Security Response teams to supporting/correcting the expected experience everyone has in Destiny. Learn how to use the Report User feature with the following Help article.
Lord Saladin has appeared in The Tower again, which means Iron Banner is in full-swing! To help you maximize your time during the event, we’ve collected a few key articles below:
You can use the Help Spotlight Search to find all pertinent articles on a given Destiny-related subject. We went ahead and did this Iron Banner search for you!

They’re at your service. Pay them a visit on the #Help forum when they can be useful to you.
#Creativity

We used to call this #DestinyMOTW. With the Creations page alive and kicking, we’re retiring the hashtag. Here’s the new guy with the top honors for this week.

Cozmo here. I’ve had a great time curating all the amazing content that was entered into the Destiny Year One Art Contest. So many of you have done amazing things in Destiny, and then added some makeup and rouge in post-production to create awesome videos to share with the community. We are going to continue to shop the Creation Page for your videos, and then share them here. If yours gets picked you win a shiny new emblem to show off to your friends.
And now without further ado, here are this week’s winners.

Honorable Mention: Against all odds.

Next week, we’ll be in Germany. The news feed about The Taken King is about to kick into hyperdrive. To expand the conversation about what awaits you, we’ll have help from some special guests who have visited our studio. They’ve played the game. Their story is about to break.
You’re going to learn more about the evolutions that await you in Year Two. There will be questions. We’ll be on hand to answer them.
Cozmo will be home all by himself. Will he post his own Weekly Update? Will he rededicate the blog to cute cat pictures?
Will any of us make it out of gamescom alive?
Stay tuned to follow the story.
DeeJ, out.