Jun 14, 2018 - Cozmo_BNG
This week at Bungie, we revealed Cayde’s fate.
If you want to remain spoiler-free, you should stop reading now and not look at the internet until September 4. As many of you already know, we gave you a glimpse of beloved Hunter Vanguard Cayde-6’s final moments earlier this week.

We told you that Forsaken is taking a darker tone and has a Western revenge vibe. It looks as if many of you have taken it upon yourselves to avenge Cayde. In September, you'll get your chance to hunt down the Barons, confront Uldren, and make him answer for his crimes.

The away team has been on the ground at E3 giving out new information on Forsaken and letting players get their hands on our new game mode, Gambit. Speaking of Gambit, we have a new trailer showing off this competitive co-op experience.

A lot of excited players have stopped by the booth to get their hands on Gambit for the first time. Here are a few photos documenting the action.

Our first Gambit players of #E3!

May all your invasions be timely and effective.

Stop by the Activision booth to get your hands on new supers, a new weapon system, the new bow weapon archetype, and Gambit. pic.twitter.com/AfqfEQmsx1

A fierce Fireteam of friends takes a Gambit victory here at #E32018. pic.twitter.com/4u70zAHOuW

Cool pictures are not the only thing coming out of E3. We also cleared up questions on Year 1 weapons moving forward when Forsaken launches. Game Informer has more details on how Forsaken players will be able to infuse Year 1 gear up to max Power.
That's not all. We also have a new developer insight video that dives into the behind-the-scenes making of the bow. You can watch it in Game Informer's Deep Dive on Destiny 2: Forsaken’s New Bow.

You caught your first glimpse of the weapon slot changes in our ViDoc, and there is gameplay footage of Gambit coming out of E3 showing how the new system will work. Our very own Design Lead Josh Hamrick shared his team’s goals for the new system and a little more info on how it works.

Josh: Hey everybody, I wanted to stop by for a second and provide just a bit of information regarding the new weapon slot system. We know many of you want the D1-style system back. Many of you have also asked us to keep the D2 model. We want to deliver something you all want, but we also want to surprise and delight you while moving the game forward. Ultimately, we want to give you something better than anything you’ve seen yet.
More Choice and Deeper Customization
The top two slots (quick slots) have more freedom than ever, allowing you to carry unique sets of Primary & Special Weapons. When paired with the appropriate Exotic, crazy load outs like the 3 Shotty build I mentioned in the ViDoc are possible… and freaking awesome.
Balanced with Ammo
Uptime for your weapons is balanced by how often you can get your hands on the right ammo. Tuned to be very similar to D1, uptime works out as follows: (most to least) Primary (White) then Special (Green) and then finally, Heavy (Purple). Primary Ammo is useless while running the 3 Shotty loadout, which takes a combination of Special and Heavy ammo —and finding yourself completely dry means it’s time to get your hands dirty. Godspeed, space puncher.
Perfect for Roles
Whether it be for raids, trials and comp, or the brand new, incredibly awesome, and (in my opinion) pinnacle Destiny sandbox activity, Gambit, the new weapon system shines at allowing incredible flexibility and customization so you and your team can strategize and build your way to greatness. Momma always said, “Loadout for the job you want.”
I promise you’re going to get more, very specific details soon(tm) alongside a TON of additional Forsaken information.

To the Victor Go the Spoils

Its winner’s week. Dead Orbit rose above the rest and claimed victory.
They broke the previous streak of dominance by New Monarchy who had won the previous four events in a row. New Monarchy finished second this time, and Future War Cult took home the bronze. Here's a breakdown of the pledges and packages. 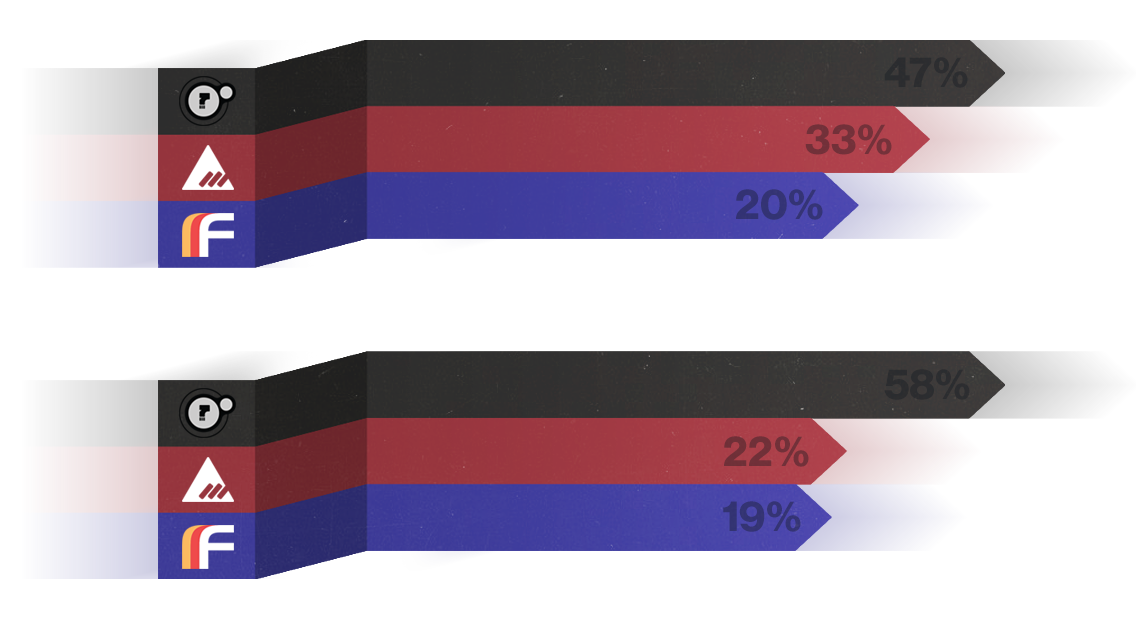 Dead Orbit is offering their weapon to everyone all this week. Make sure you pick it up before the next reset. If you pledged to them, you also get a hefty discount. New Monarchy and Future War Cult will get another shot when the Faction Rallies start back up again.

The banner is going back up again. Saladin invites fireteams of six to do battle for glory.
BEGINS: Tuesday, June 19
ENDS: Tuesday, June 26
The game is Control!
If you didn’t earn all your Season 3 ornaments during the first event, your progress carries over, and you can pick up right where you left off. Same goes for working your way through Saladin’s reputation ranks.
Good luck out there!

Next Friday, we are delivering the next episode of our web comic Warmind. Follow Ana Bray as she continues her adventure. 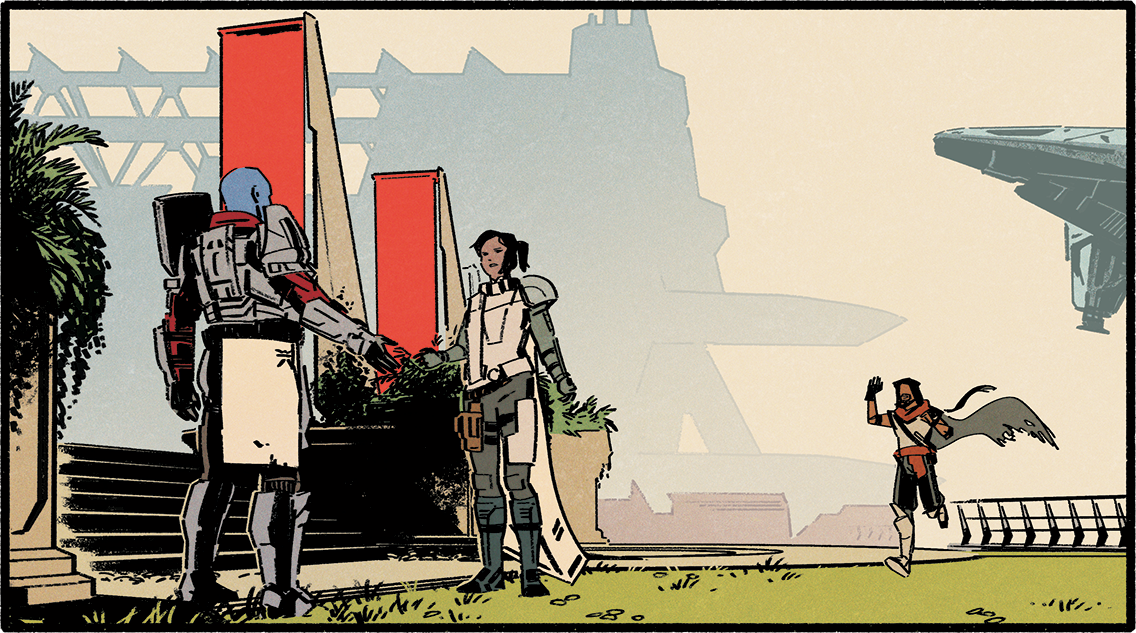 We will also release the localized versions of Warmind episode 2 next week. All of it is going live on June 22 at comics.bungie.net.

Bungie is dedicated to every individual in our community and embraces what makes us each unique. We are excited to support the LGBTQIA community through the sale of our Bungie Pride shirts and tank tops on the Bungie Store.

100% of the profits will support The Trevor Project, a leading national nonprofit organization that provides crisis intervention and suicide prevention services to LGBTQIA young people under 25.

Destiny Player Support is already preparing for your next adventure. They will be on hand to make sure you have the information you need when we roll out Forsaken this fall. Until then, they are still supporting the live game every day.
This is their report.

Young Wolf and Saladin's Pride Memorialization Emblems
Since Destiny 2 launched, DPS has monitored reports from eligible veteran Destiny players who have not yet received the Young Wolf or Saladin's Pride memorialization emblems in Destiny 2. We have determined the cause of this issue and have set up a process to verify reports and resolve the issue for impacted players. To submit a report, affected players should see our Missing Memorialization Emblems pinned thread.
Player-Impacting Issues on Xbox One
DPS is currently investigating an issue which is causing some Xbox One players to be unable to launch Destiny 2 from their console dashboard. Additionally, some players have reported infrequent framerate issues on Xbox One following Hotfix 1.2.1.1. While we continue to investigate these issues, affected players may find resolution by following the mitigation steps listed in our Xbox One Application Launch and Framerate Issues pinned thread.
Reports of Recent Crashes on PC
Recently, the DPS team has observed reports from players encountering crashes or freezes while playing Destiny 2 on PC. While this issue is still under investigation, so far it has been determined that the causes of the majority of these reports are unrelated. As always, players who encounter issues on PC should report them to our #PC Support forum. For confirmed issues on PC, players should visit our PC Known Issues list.
Warmind Known Issues List
With the launch of Destiny 2: Warmind, DPS has consolidated all the latest gameplay known issues reported by players into the Warmind Vital Information and Known Issues list. Before players report an issue to the #Help forum, we recommend they visit this page to determine whether or not the issue is already tracked by the DPS team. If they are available, potential workarounds and mitigation steps will be there as well.

I Don’t Feel So Good

The movies keep on rolling. We have two more picks for you this week. As always, we'll be sending the creators a special emblem to celebrate their victory. If you are one of said creators, make sure you put the player names of everyone involved in making the video in the description. For a chance to win next week, submit your video to the Creations page.
Movie of the Week: Cayde-6 Tribute

What a week. We’ve had a great time sharing details about Forsaken and watching players experience Gambit for the first time. There is plenty more to talk about. We know you have lots of questions. The answers are coming.
<3 Cozmo