Jun 4, 2020 - A_dmg04
This Week At Bungie, Season of the Worthy is ready for departure.
Before we talk about anything else, we’d like to maintain your focus on the events unfolding around the world. You may have seen demonstrations in your town, or like many of us here, down the street from the place you call home. 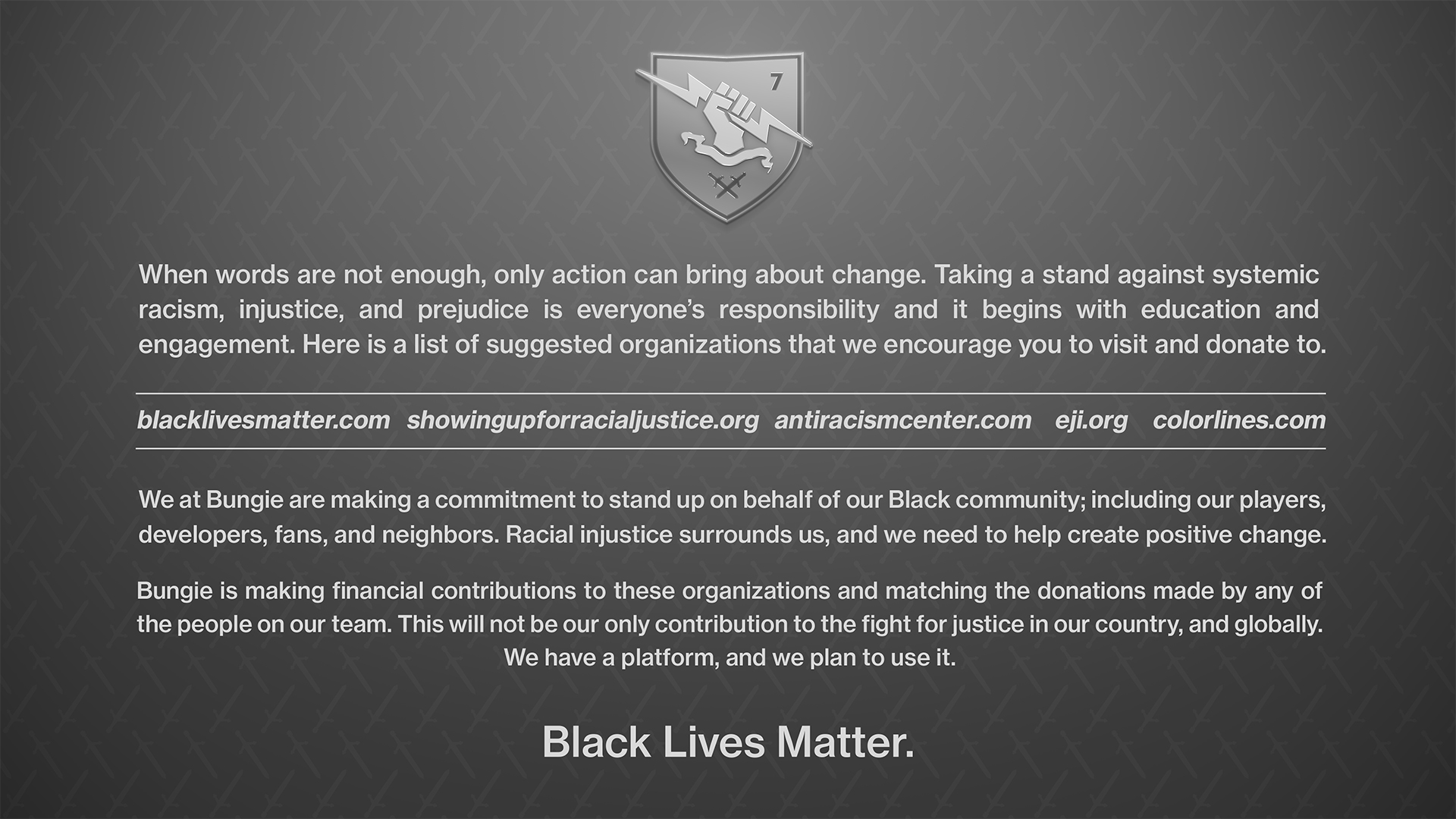 Support does not end with a single statement or action. We’ll continue to use our games and our shared voice to make the world a better place. We hope you’ll join in supporting these efforts by visiting the following resources noted above, and more, by getting directly involved.

This week also kicks off Pride month. If you hadn’t seen the @BungieStore announcement, our Pride Pins are back in stock. All profits from sales of Bungie's Pride Pin benefit the It Gets Better Project, which inspires people across the globe to share their stories and remind the next generation of LGBTQIA+ youth that hope is out there, and it will get better. We also have some words from the Bungie Diversity Committee, speaking to the design of the pin:

Diversity Comittee: Our Pride pin was specifically designed to include black and brown stripes, in an effort to be inclusive and show support for people of color within the LGBTQIA+ community. In that spirit we want to continue our support for all intersectional communities; including LGTBQIA+ individuals who are also part of the Black community currently fighting against racial oppression, demanding justice and equality. We can support the Black Lives Matter movement and the LGBTQIA+ community at the same time, because without the leadership and heroism of Transgender Black and Brown individuals, like Marsha P. Johnson and Sylvia Rivera, today's LGBTQIA+ rights would not exist. And so now is a time to do more to help both, rather than dividing our efforts.

If you snag a pin, you’ll also receive a code for the True Colors Emblem to show your support in-game when playing Destiny 2.

We’ll continue sharing Bungie initiatives to support LGBTQIA+ communities throughout the month of June, so stay tuned. Our commitment to racial justice is just getting started, so you can expect to hear more soon.
Within Destiny 2, you may have been watching the approach of the Almighty. You’re itching to see the conclusion of the Season, but you’re also starting to hear whispers of what’s coming next. Join us on Tuesday, June 9 at 9 AM PDT to learn about the future of Destiny 2. 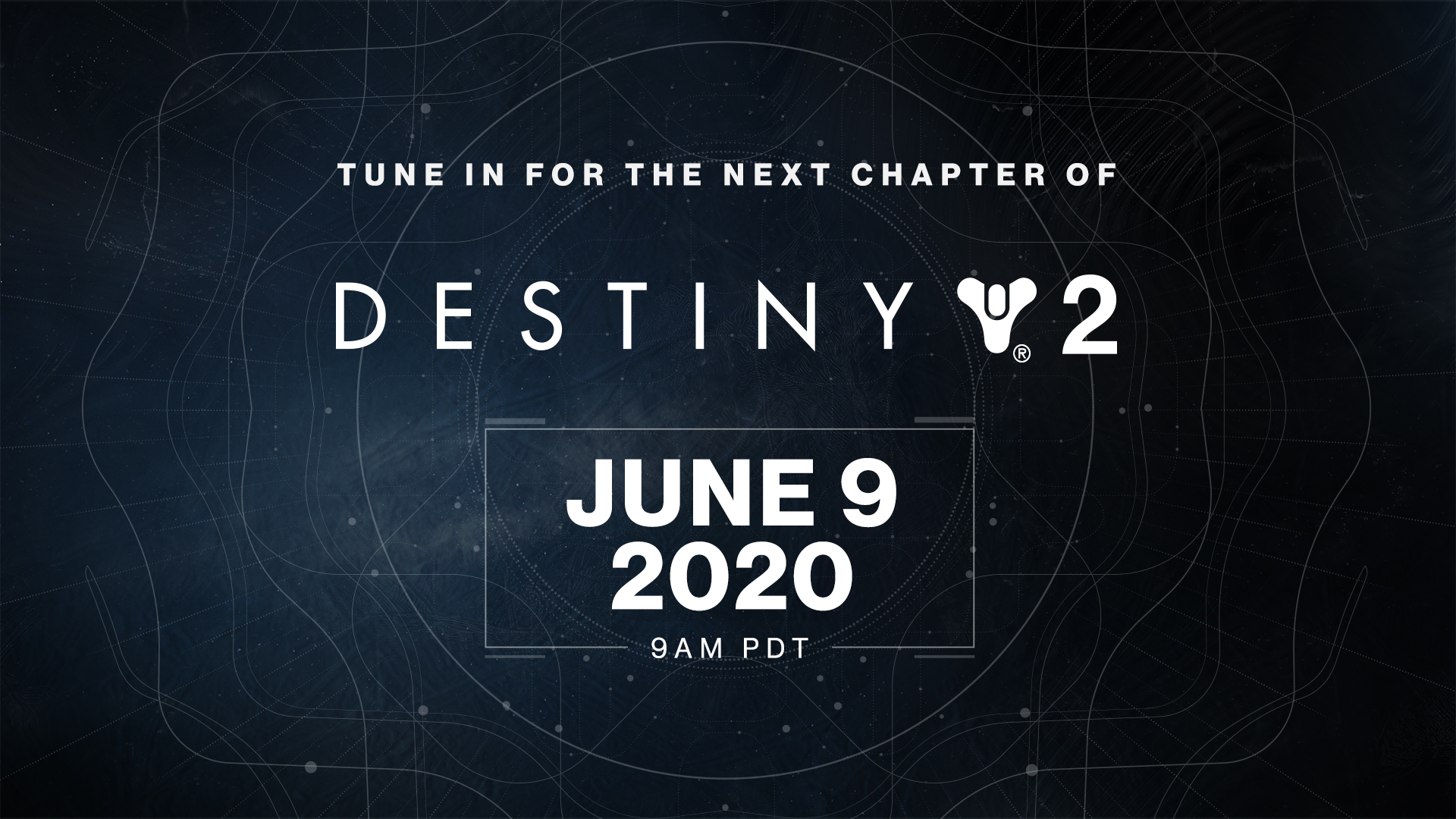 Something calls. It's time to answer.

Destiny 2 Update 2.9.0 will become available next week, meaning we have a pile of patch notes to get through. Let’s take a quick moment to look through some of the changes.

Eververse
A few TWAB’s back, we talked about the future of Eververse, and how we’re making changes to some reward structures to better balance gameplay rewards with Eververse content. Season of [REDACTED] will contain a few introductory changes, with more shifts coming in Season 12. The following changes will become available next week:

We’re expecting to have an update later in Season 11 on further changes to Bright Dust acquisition, so keep your eyes peeled.
Sandbox

NOTE: Drop chance begins at 10% and increases to a max of 50% over 20 clears.
Trials Rewards

Hope you enjoyed this appetizer. Full course (and more) coming on June 9. See you then.

Mixing a Green Thumb with a Bumper Jumper

So, we heard you like patch note previews. They’re short, sweet, and to the point. This topic, though, needs a bit more time to get through. Today, Staff Designer Lisa Brown takes center stage to walk us through the upcoming Controller Remapping feature that the team has been working on.

Lisa: Greetings, Guardians! I’m Lisa, a staff designer on the sandbox team here at Bungie, and I’m going to give an overview of the controller remapping feature for gameplay actions that will be coming to Destiny for all players in the Season of [REDACTED].
Although we have controller presets in Destiny, these aren’t enough to meet basic accessibility guidelines for motor control and mobility. We’ve been working with some amazing accessibility consultants – Cherry Rae Thompson (https://www.cherryrae.com/) and Ian Hamilton (http://ian-hamilton.com/blog/) – to create support for remapping buttons on the controller. Here, I’ll give an overview of how to use the feature, what it can and can’t do, and then share some setups that have been used by various Bungie employees as examples. As a quick note, all of the below examples will be shown using Xbox button layouts.
Overview
Players can create a custom controller layout by going to the Controller section of the Settings screen and choosing Button Layout. A “Custom” option is available in the list. 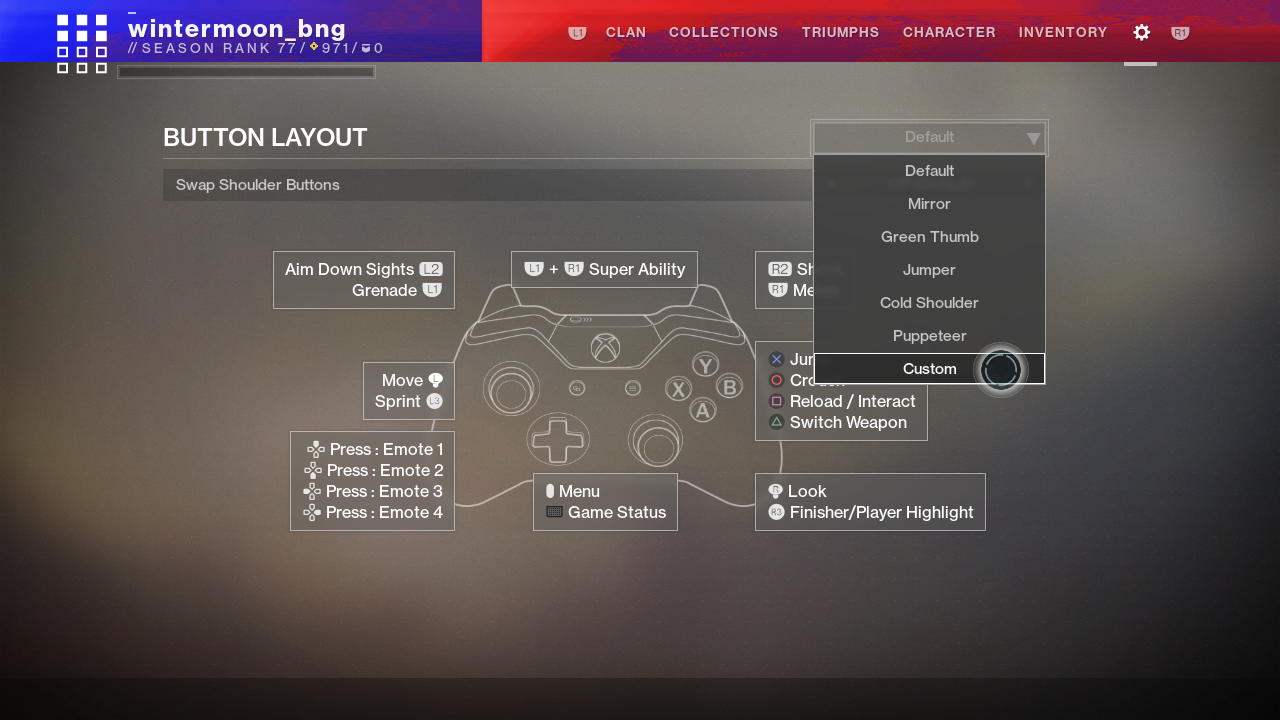 On this screen you’ll be able to customize mappings for gameplay actions on your character, in vehicles, and in general settings (like emotes and interacting with prompts). 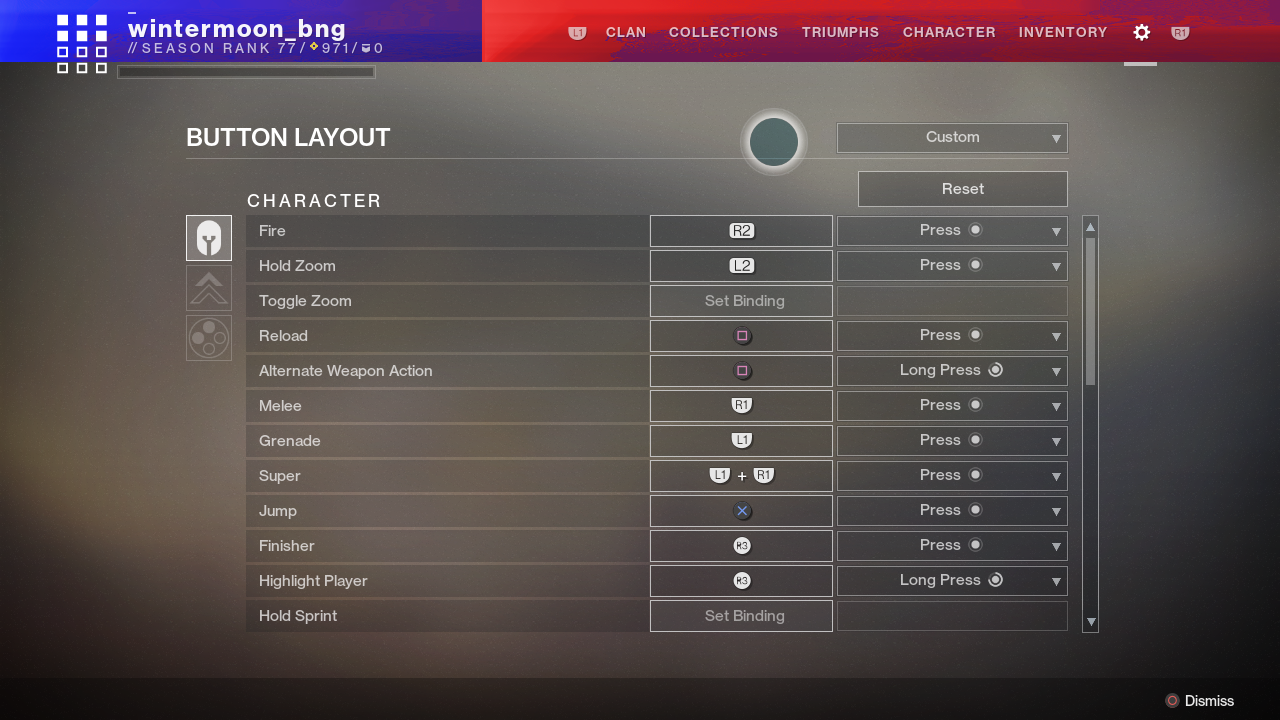 If you’re like me and you typically use a preset other than Default, you can use the “Reset” button to start from one of those presets. 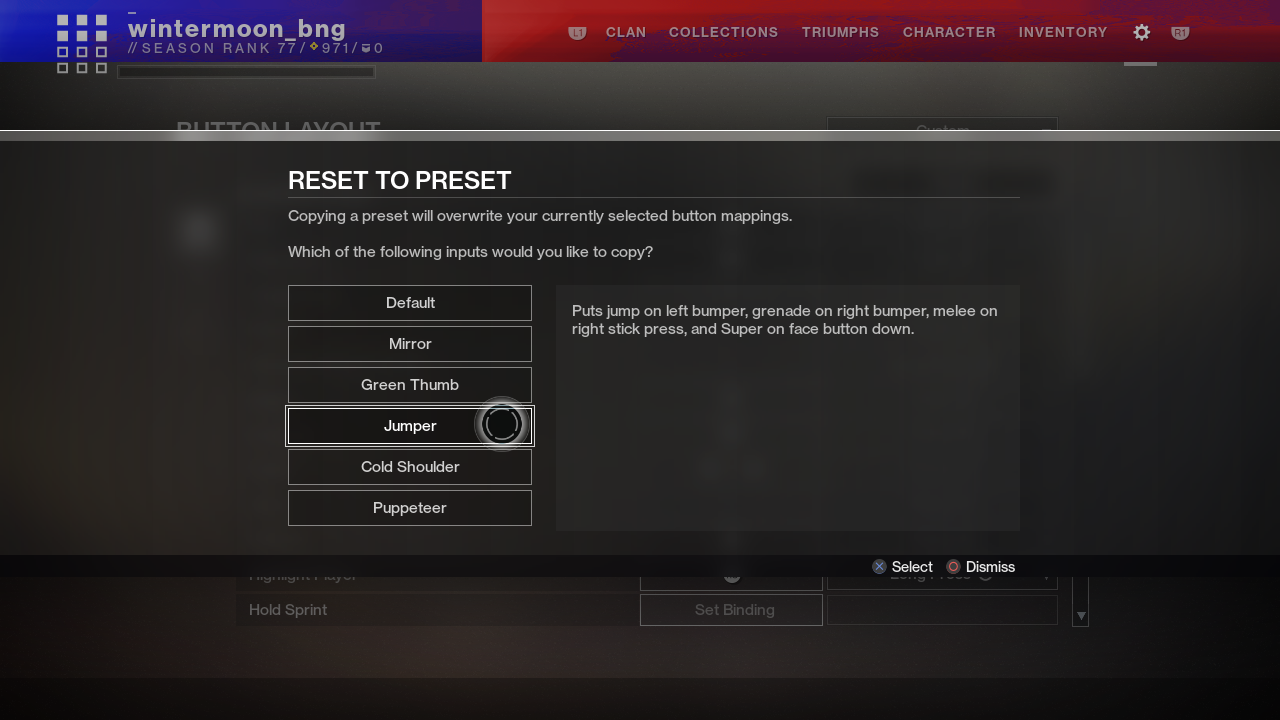 To rebind a button, select the button mapping next to the action you want, and the next screen will allow you to input the button you want to remap to. 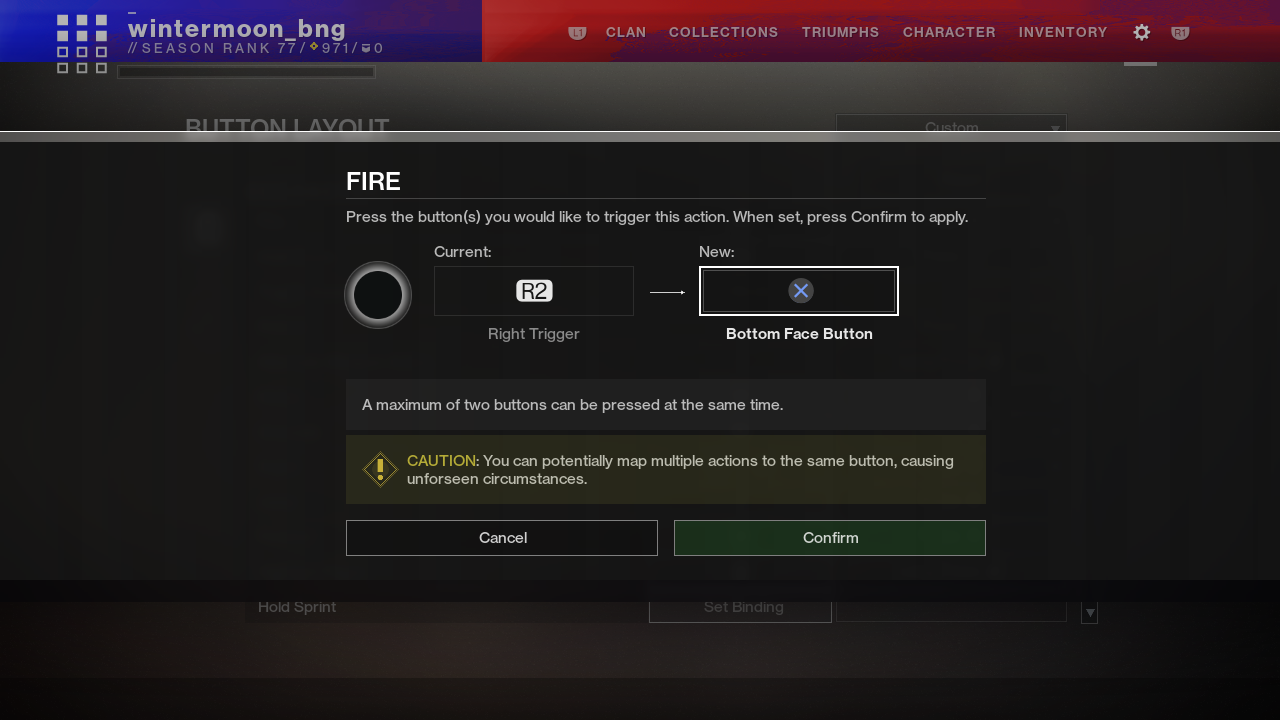 Verbs, Verbs, Verbs
One of the challenges with controller remapping in Destiny is that we have a LOT of player verbs. Think of verbs as actions – throwing grenades, triggering your Super, jumping, sprinting, sliding, etc. With PC remapping, there’s a whole keyboard at your disposal to map buttons. On the controller, though, there’s only so many buttons, and we have many more verbs than buttons.
To solve this, we allow the player to map an action not just to a button, but also a type of input. Our three supported input types are:

As an example, some of our Exotic weapons (Borealis, Symmetry, Hard Light, etc.) have an alternate weapon action, which has typically been activated by holding the reload button. Now this can be mapped separately, to a different button or different input. For example, I like to change it from long press X to double press X. Now when I want to switch Symmetry’s firing mode, I double press the X button.
For the Double Press input type, you can also increase the amount of time between button presses for it to register as a double press. This option is on the main controller page. 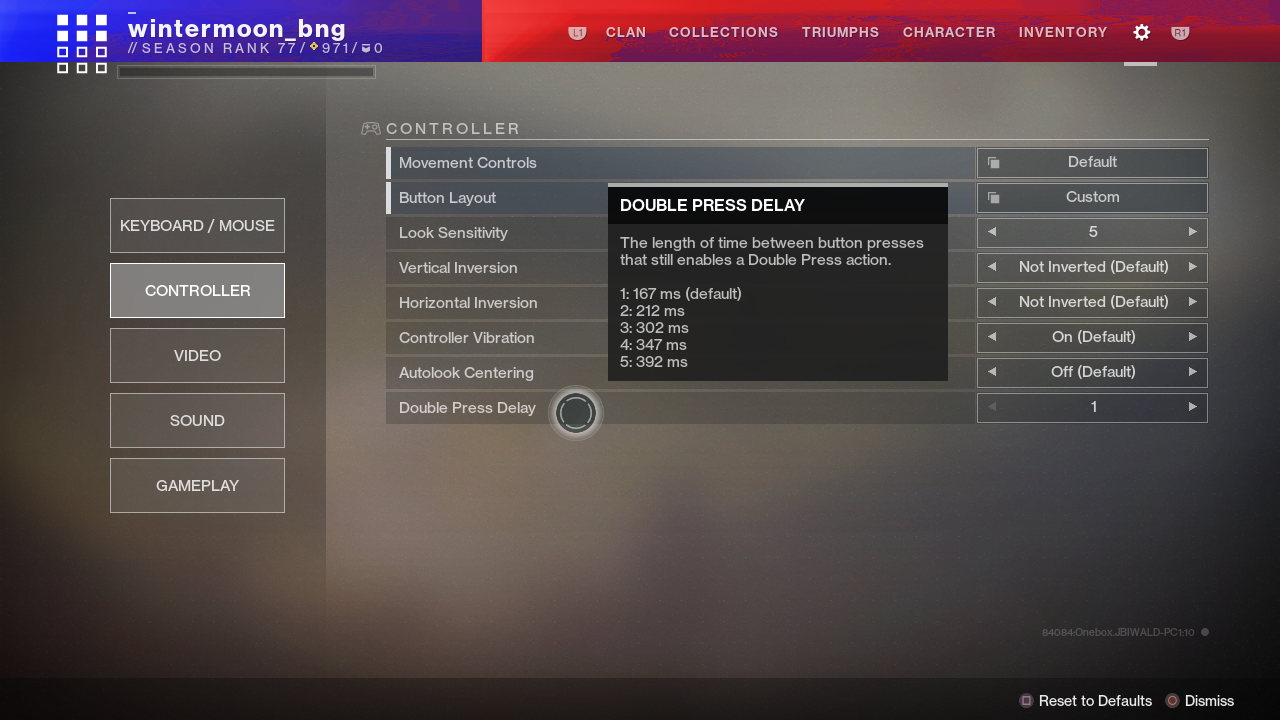 Chord Support
In addition to mapping actions to an individual button, we also support mapping to Chords, meaning two buttons pressed simultaneously. In the default layout in Destiny, pressing the Left and Right Bumpers together to execute your Super is an example of a Chord.
Here’s a custom layout example where a player has mapped some of the basic character options to just the face button using Chords:

Constraints and Caveats
Although this feature is a step towards greater motor accessibility in Destiny, it is still limited in what it can do. For example:

Bungie Examples
Here are a few examples of custom mappings that some of our Bungie players enjoy.
I’ll start with my own. I’m typically a Jumper player, but I also have a problem with melee on Right Stick Press. Even though it’s a faster input for my hand to reach, I am a stress-clicker, and many a perfect shot line up has been ruined by a wayward melee. I needed to move my melee action to something more intentional, so I put it on A, and moved Super back up to the Double Bumper Chord. I put player highlight back on right stick press, but made my finisher Double Press A. I also made my alternate weapon action Double Press X instead of Long Press, because I prefer that input.
Another example is from a left-handed player who typically uses Mirror, but wanted a true left-handed experience, and so swapped the function of the face buttons with the d-pad buttons. Actions like reload, jump, crouch, etc. were now on the d-pad buttons, while emotes were mapped to the face buttons.
A third Bungie employee really wanted to recreate a classic Halo experience in Destiny. He started with the default layout and switched zoom to a Toggle on Right Stick, grenade on Left Trigger, melee on B and crouch on Left Stick Press. He then mapped Super to A, jump on Left Bumper, and class ability on Right Bumper. He also chose to leave heavy attack, light attack, and guard (actions only used in third person modes like roaming Supers) mapped to their original Right Trigger, Right Bumper, and Left Trigger mappings.
We hope that this feature will make Destiny more accessible and flexible, but do note that this is but one step on Destiny’s journey to improve accessibility across the game.

We’re excited to bring another form of accessibility to Destiny 2, and will be watching as this first iteration goes live.

It’s pretty much closing time. You don’t have to go home, but you should definitely get your Triumphs done before the servers go offline next Tuesday. Player Support has a full roundup.
This is their report.

CLOSING OUT SEASON OF THE WORTHY
When Season of the Worthy ends at the weekly reset on June 9, 2020, there will be a number of items, activities, and Triumphs that will no longer be available to players. Some of these items include:

A full list of items being removed at the Season’s end can be found here.
Please note that Season Pass rewards from Season of Dawn will be unavailable to claim when Season of the Worthy ends. Past Season Pass rewards can be claimed here.
UPDATE 2.9.0
On Tuesday, June 9, Update 2.9.0 will be available to players. Below is a timeline of Destiny 2 maintenance for Update 2.9.0:

UPCOMING RESOLVED ISSUES
Below is a list of issues that will be resolved with Update 2.9.0 on June 9:

Last Screening of the Season

This is our final MOTW of the Season. How time flies, eh? We’ve featured hundreds of creations in this space, and this week had the most individual contributors of any creation we've selected so far. Congrats to all of the Guardians who are taking a W home as Season of the Worthy comes to a close.
Movie of the Week: Quarantine Guardians

If you’re hunting a MOTW Emblem, make sure to submit your video to the Creations Page on Bungie.net. Link the Bungie.net accounts of anyone who helped in the video description, or we won’t know where to send your prize!
There are so many important things going on in the world, it’s difficult to maintain focus on much of anything right now. I’ve been spending a lot of time with friends in Discord servers while hitting weekly milestones, talking to them about their health, thoughts, and feelings concerning current world events. Much of our attention has been on what’s happening right outside our windows. The thing is, this isn’t new. This has been happening since well before many of us were born. It’s time to listen and learn from our neighbors and communities. Check in with your fellow Guardians, friends, and family. Take action to help them out if or when they need it. It’s perfectly OK to press pause, put your controllers down, and focus your attention elsewhere - especially if you're going out there to demand justice and to support the Black community. You may find many of us out there with you in the greater Seattle area. Destiny will still be here when you want to sit down for a few games. It isn't going anywhere.
Be well, be safe, and we’ll see you starside.
-Dmg04