Nov 15, 2018 - dmg04
This week at Bungie, we brought the thunder.
Many among you have followed the trail to Master Ives's killer. Leads have gone cold over the last few weeks, but the scent picked up on Tuesday, leading to your final confrontation—and the sweet reward. No more waiting, only justice to be served in the frigid wastes of the Cosmodrome.

Upon completing the quest and (re)claiming your Thunderlord, you’ll also unlock availability of the newest addition to our Bungie Rewards program. You will have through 11:59 PM PST on November 27, 2018 to claim your code and acquire this wearable trophy. May it be a light for you in dark places. 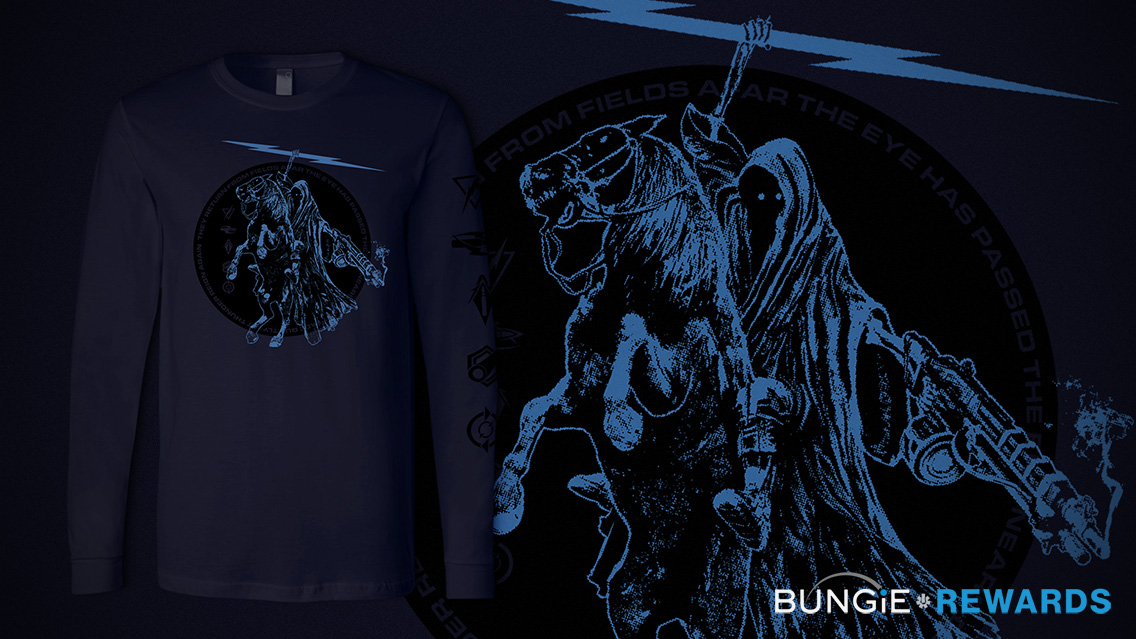 The Lost Cryptarch quest will also be available through November 27. After that date, Thunderlord will be rolled into Exotic Engrams and the Cosmodrome will return to full quarantine.
Let thunder reign again.

Season of the Forge, and Beyond

With the Thunderlord in play at the end of the trail, the Season of the Outlaw has revealed its very last mystery. If you’ve fought your way from Cayde through the raid, we’ve loved having you along for the ride. The time has come to begin a new conversation about how the Destiny endgame will continue to thrive in the months to come.
As announced last week, Season of the Forge will begin on November 27, 2018. On the day it arrives, we’re planning to release a brand new ViDoc and a full gameplay calendar to illustrate what awaits your Guardian for the rest of the year. What we have planned are not the post-launch expansions you may have played in years past. Your starside journeys will span three distinct seasons that will unfold over the rest of the year.

What will each Season hold for every player of Destiny 2? How will the Annual Pass add to that experience? These are the questions we want to answer as we introduce you to a whole way to to enjoy your hobby as a Guardians with new challenges to conquer and new rewards you’ll want to add to your inventory.
Next week, as the holiday season begins in our neck of the woods, the news coming out of our studio will be random and light. The week after, we’ll be exploring all the details of another kind of season. Stay tuned for what comes next.

The Flip of a Coin

Of all the reasons we’re proud of Forsaken, one of the highlights has been Gambit, our new competitive co-op mode. The community response has been exciting and humbling. On Monday, we had a great time putting a bounty on the heads of some of our finest players in the studio while the developers talked about their inspirations and fielded some player questions. If you missed it, check out the stream recap!
Watch Bungie Bounty - XBOX ONE - 11/12 @ 10AM PST from Bungie on www.twitch.tv
Noted during the stream, a few changes are coming to Gambit in Season 5. Designer Robbie Stevens has a quick list of updates you can expect on November 27.

Robbie: The Gambit team has been closely monitoring the community's reaction to this mode, and we've implemented a series of quality-of-life updates and bug fixes.
Gambit Bounties

Next week is our send-off for Season of the Outlaw. What better way to celebrate than letting the Drifter sweeten the pot a little?

In less than two weeks, Destiny 2 Update 2.1.0 will become available for download, kicking off Season of the Forge. Before we're there, we have some housekeeping and notes to cover.
This is their report.

Changing Seasons
As called out in This Week at Bungie – 11/08/2018, players who wish to complete seasonal Triumphs and objectives have until November 27. On that day, Season of the Forge will begin, ranks will reset, and incomplete Triumphs for Season of the Outlaw will expire.
Specifically, items that will reset are as follows:

Examples of items that will not reset or expire:

Restocking Shelves
In addition to rank and Triumph resets, players have until November 27 to redeem Prismatic Facets received from weekly Eververse bounties. After the season transitions, Prismatic Facets from Season of the Outlaw will expire and no longer be available for use in the Prismatic Matrix.
Players should also be aware that Steadfast Engrams will be removed from Eververse stock at the start of Season of the Forge, and will be replaced with a new Bright Engram that contains new items.
Infamous
With the upcoming transition into Season of the Forge, there is a known issue regarding Gambit bounties which we would like to bring to the attention of our players.
Players who complete Gambit bounties during Season of the Outlaw and keep those bounties in their inventories after the season transitions must complete a Gambit match in the new season before turning them in.
Players who turn in these bounties after Season of the Forge begins, but before playing a Gambit match, will not correctly receive points to their Infamy rank from these bounties.
A Heck of a Week
In recent weeks, some players have noticed that Season of the Forge begins on November 27, but Black Armory becomes available on December 4.
Just like the release of Forsaken before it, there will be a one-week window in which Destiny 2 will be in a state of transition, and players may encounter a number of unforeseen issues.
The Destiny Player Support team is currently working to consolidate a list of temporary changes that may impact the player experience during this week-long window. In the meantime, we would like to remind players that issues encountered in-game are best reported to our #Help forum. When we have more information to share about this week-long transition, we’ll be sure to let you know.
Destiny 2: Forsaken Known Issues
In addition to the items listed above, Destiny Player Support is tracking the latest issues reported by players on the #Help forum. Provided below is a brief overview of the latest known issues in Destiny 2: Forsaken.

For the latest known issues as soon as they are available, players should visit the following known issues threads: Destiny 2: Forsaken and PC known issues.

Last week, it was cloudy with a chance of meatballs. This week, we’re seeing thunderstorms. Don’t be scared, though—keep yourself grounded and fight the good fight in Iron Banner.
Movie of the Week: Blink and You’ll Miss It

Runner Up: Thunder and Lightning
Want to see your video here? Submit your video to the Creations page. If you win, we will send you a special emblem to show off to your friends.
This weekend, Last Wish is on our minds. The top raiders of Bungie will be melding minds to perfect their strategy for Monday’s livestream. If there’s a single wipe, we’ll fire Cozmo again. We also have a solid lineup of developers who are eager to dive in to the creative process. Ever wonder what goes into building an Ahamkara? How many meetings it takes for a producer to go mad? Tune in to find out!

Until then, I’ll be checking off my final Triumphs for the Wayfarer title. Just a few more Heroic missions for Asher Mir, and I’ll have my purple bar. Many of you are at the last steps of the Luna’s Howl, Not Forgotten, and Redrix’s Broadsword quests! Don’t forget: This weekend is the final Iron Banner and Triple Valor event of Season 4. See you out there.
Cheers,
Dmg04
P.S.: Excelsior!