Nov 8, 2018 - A_dmg04
This week at Bungie, we’re looking toward the future.
Festival of the Lost has come and gone. Guardians spent three weeks eliminating Nightmares in the Haunted forest. All that remains is the investigation into the murder of Master Ives. Many of you are still working toward some of your Forsaken goals, earning titles and various Triumphs. Even with much to do in game, we’re looking to spice things up a little.
First up, we’re dusting off the Twitch studio. We’ve been hearing some feedback that you want to get to know our team a little better, and hear some stories from the development floor.

Each stream will showcase gameplay with commentary from the creators of Destiny 2. Following our streams, we have some changes coming up to address feedback we’ve collected since Forsaken was released. Read on for more!

As you continue to fight the Scorn and defend the Dreaming City, we’re collecting player feedback and looking at ways to improve your quality of life. We have a few deployments in development and wanted to give you a preview of what’s on the way. Everything below is subject to changes on the development floor. If issues are found or bugs arise, items may be delayed. In any case, we’ll keep you updated on the status until this work is translated into patch notes.

Performance
Engineer Ben Thompson: We have been paying close attention to reports of long load times on console and are working on improvements to reduce these load times. Let’s break down three distinct performance issues that we are looking into (each with different contributing factors):

In the upcoming Season 5 update, you should see significant improvements loading into activities and traveling throughout a destination. We've been bringing new content, bug fixes, and patches at a cadence more frequent than we had previously accounted for. That cadence of patching has translated into some unexpected overhead within the code that is responsible for loading data into the game.  All that being said, loading from Orbit into the EDZ should be reduced from over two minutes down to just over one minute and we’re eager to see how things pan out in the wild.
We’re continuing to investigate load times when launching Destiny 2 and when interacting with aspects of the UI. When more information is available, we’ll provide updates.
Super Tuning
Sandbox Design Claude Jerome: Spectral Blades was heavily re-tuned to increase the reliability of melee attacks in PvP and to bolster the effectiveness of Super’s stealth capabilities The following changes are planned to reach these goals:

For Chaos Reach, we’re tuning the energy cost of deactivating Chaos Reach early. The intent of this tuning pass is to make it more rewarding to skillfully time your early deactivation when using this super. Essentially, it will be more punishing to deactivate the Chaos Reach Super extremely early, but less punishing when deactivating later in the Super.
Checkpoint Resets
User Interface Tester Tony Gacia: We’re currently looking to add reset functionality to checkpoints in various activities, like the Last Wish raid. We do not have a specific timeline for when this functionality will be added, but wanted to note that the feedback is under investigation.

Recently, Destiny 2 became free to all players on PC through November 18. To celebrate our new players and introduce them to the Drifter, we'll be hosting another Gambit Free Trial weekend.

If you own Forsaken, Double Infamy will also be available in the Gambit playlist. As it’s a full curse week, expect to see some Ascendant Primeval Servitors during your time on the field.

We are rapidly approaching the end of Season 4, which is currently set for November 27, 2018. You have a limited number of weeks remaining to complete the following objectives:
Iron Banner
Lord Saladin returns next week for the final Iron Banner of Season 4. While Iron Banner weapons introduced with the release of Forsaken will continue to be available, this will be your final chance to earn Season 4 Iron Banner armor.

Additionally, this will be the final chance to earn any Iron Banner Triumphs associated with Season 4.
Triumphs
Some Triumphs have seasonal requirements. While these Triumphs do not have a score associated with them, players may wish to complete them prior to November 27.
Pinnacle Crucible Weapons
While questlines for Luna’s Howl and Not Forgotten are available year-round, Crucible ranks will reset at the end of Season 4. Each quest contains a quest step to reach a rank milestone, and progress may be lost for these specific steps if you do not reach the requirements prior to the season ending. Progress for alternate quest steps will not be reset. If you’re in the middle of getting precision kills or completing Rumble matches, you will not lose any progress in those steps.
If you’re within arm’s reach of Fabled or Legend, this is your time to make the final push. If you do not reach the rank you’re aiming for by November 27, you will be reset to Guardian and have to climb the ladder once more. If you reach the rank and complete the associated quest step before season’s end, you’re all set.
Quick shout out to one of our community artists, Aviixe, for their amazing creation. This piece perfectly captures the feeling of earning Luna's Howl! 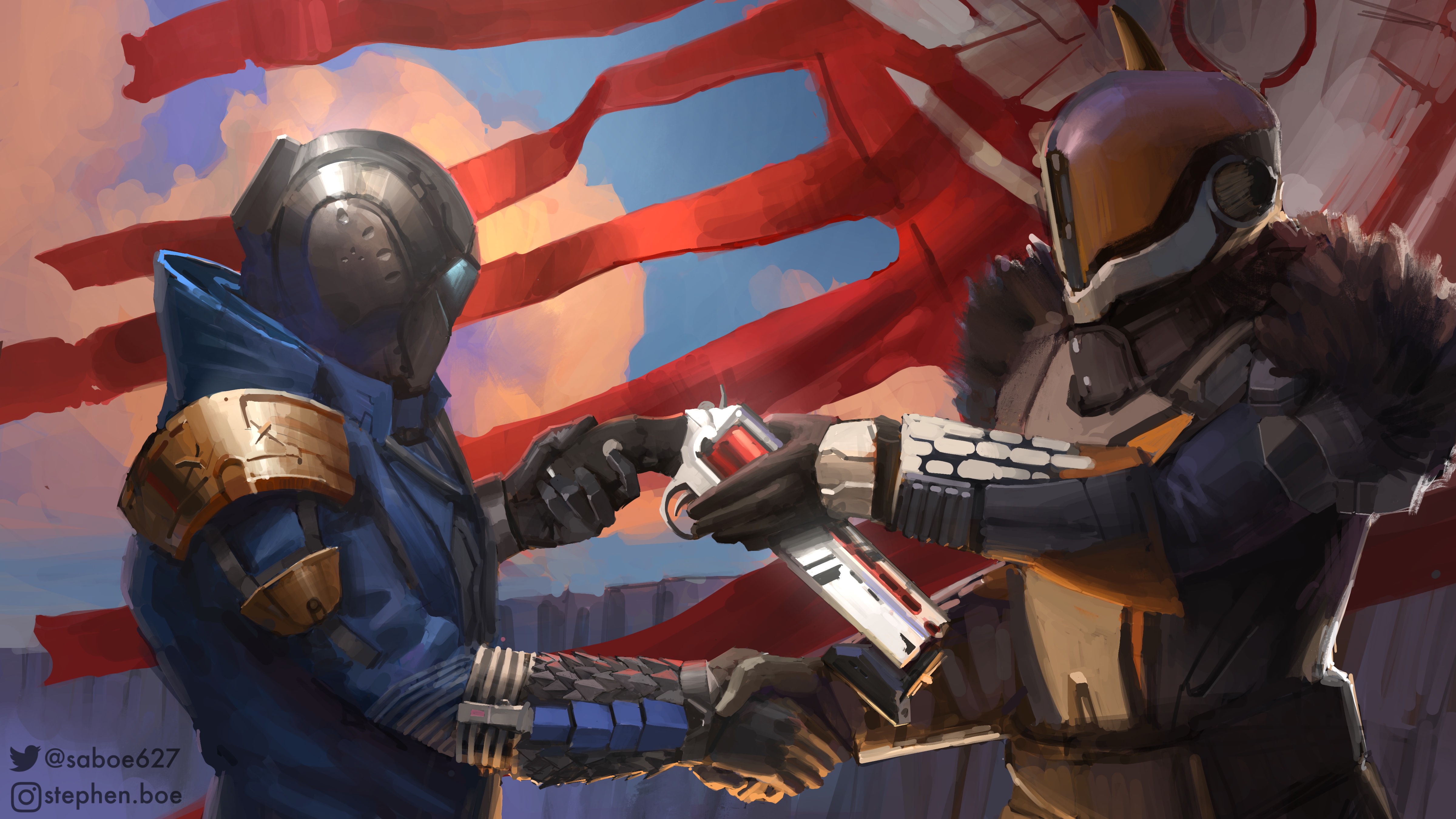 On a daily basis, team members of Destiny Player Support meet to discuss the issues that you’re encountering in game. Ranging from error codes to Collections, they’ve got their finger on the pulse of this community.
This is their report.

Destiny 2 Hotfix 2.0.5.1
Earlier this week, we conducted maintenance to deploy Hotfix 2.0.5.1 to players. This hotfix was in direct response to an emergent issue that prevented some players from receiving the Lost Cryptarch quest from Amanda Holliday after it became available.
While we believe all cases of this issue have been resolved, players who continue to encounter this issue should let us know by reporting to the #Help forum.
Refer-a-Friend
With the launch of the Refer-a-Friend promotion, Destiny Player Support has observed a number of reports from players who are receiving a message indicating that they are ineligible to participate in Refer-a-Friend. After investigating reports of this issue, we have determined that a significant majority of these players do not own Destiny 2: Forsaken, and are accessing Destiny 2: Forsaken content through platform license-sharing features.
Please note that in order to participate in Refer-a-Friend, both linked players must own full Destiny 2: Forsaken licenses on their participating accounts.
Destiny 2: Forsaken Known Issues
In addition to the items listed above, Destiny Player Support is tracking the latest issues reported by players on the #Help forum. Provided below is a brief overview of the latest known issues in Destiny 2: Forsaken.
For the latest known issues as soon as they are available, players should visit the following known issues threads: Destiny 2: Forsaken and PC known issues.

How Do You Pronounce Meme?

Is it meme or meme? Gif or gif? However you say it, this week’s winner has gifted us with yet another awesome movie. Their editing skills are on point, and we hope you enjoy their creation as much as we did.
Movie of the Week: Don’t Sleep on It

Want to see your video here? Submit your video to the Creations page. If you win, we will send you a special emblem to show off to your friends.
We’re excited for the future of Destiny 2. Season of the Forge is coming up quick, and we have more than enough to keep ourselves busy until then. We’ll be reminding you throughout the month, Season 4 ends on November 27, 2018. Claim your Triumphs and earn your gear before time’s up!
If you missed it, make sure to check out the Community Focus from earlier this week, featuring DrAssenov! If you have suggestions for a future Community Focus, let us know on the #Community forum.
Cheers,
Dmg04