Mar 23, 2017 - DeeJ
This week at Bungie we’re talking about the end of an era.
Age of Triumph is nigh. Every Guardian will have a chance to take stock of everything they’ve accomplished, dive into some renewed challenges, and decorate their legend as evidence of their favorite memories. The party is about to begin.
The final elements of fanfare have arrived. Earlier this morning, we published a new page right here on Bungie.net. It illustrates the full menu for the Age of Triumph celebration. Click and browse! 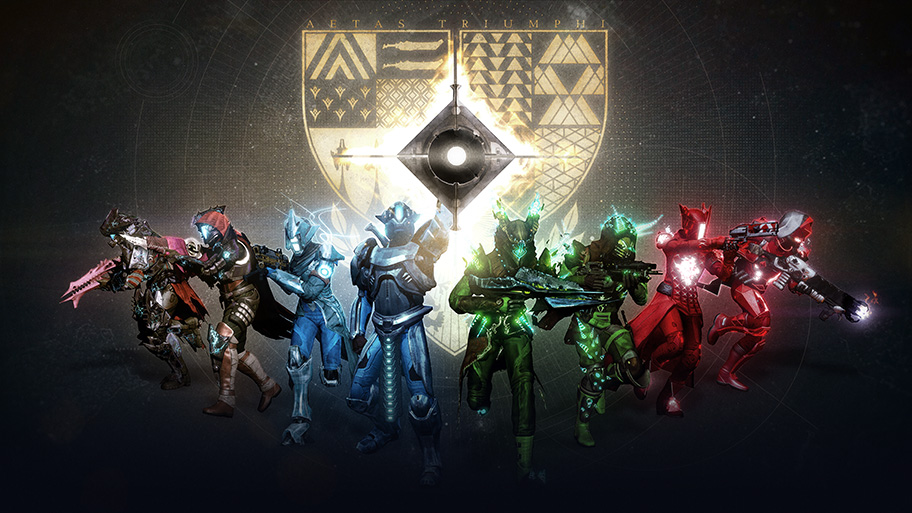 And, don’t forget the final live reveal stream that we hosted yesterday. It was equal parts fashion show and weapon inspection. Feast your eyes on every new set of armor that awaits you in every Raid. Some of your favorite weapons may be getting the ornamental treatment too, as well as the elemental treatment. Click and relive!

Too-Long-Won’t-Watch Mission Brief
There are no more streams. This hype train is about to come into the station, but the game will live on. Now it’s time for you to take center stage and strut your stuff.
Age of Triumph begins on Tuesday, March 28, at 10:00 AM Pacific. Watch the skies for the signal. Read the patch notes to confirm everything we’ve told you, as well as some things we haven’t. Then, crack open that new Record Book and see where you stand.
So Refreshing!
We’ve said a lot about the new ways you’ll be able to acquire sweet loot in Age of Triumph. One thing we haven’t talked about are Tower Vendors. Your favorite purveyor of weapons and gear is getting in on the action. To speak for them, Senior Designer Josh Hamrick is here again to go on the record.

Josh: Hey everyone!  There are a few common questions bouncing around after the stream. Allow me to clear these things up for you here and now.

1. Your Legendary Marks hold much value once again!  The following vendors will have weekly rotating perks on Armor and Weapons:

Other vendors that already had a weekly refresh will continue this functionality:

2. A new quest will be available to get Necrochasm into your hands.

3. Every Primary from every Raid has a new Exotic Adept version that has been blessed with an elemental damage type. I expect them to be quite handy for burns of the matching type.

4. Every Primary from every Raid also has its returning Legendary version that will NOT have an elemental damage type applied. You can earn these weapons from the regular 390 Raid on a Weekly Basis.

5. Yes, that black and gold Suros ornament is indeed rad as hell.

Love you all!
-Hamrick

The pre-flight checklist for launching new experiences is long and distinguished. Our control tower is staffed by steely-eyed missile men and women. Destiny Player Support keeps watch on the cargo manifest as we load the contents aboard.
This is their report.

Preparation for Destiny Update 2.6.0
On March 28, the Weekly Heroic Strike and Weekly Nightfall Playlists will be unavailable from 2:00 AM Pacific (9:00 UTC) through the release of Destiny Update 2.6.0 at 10:00 AM Pacific.  If a player were to complete an activity in either of these playlists prior to accepting Update 2.6.0, they would not be able to earn new rewards from the Updated Age of Triumph Ritual Playlists. This includes Blue Flames and Radiant Light from the Nightfall playlist, and one Treasure of Ages from the Weekly Heroic Strike playlist.
Attempting to launch either of these activities will result in Error Code Honeydew during this time period. We will have additional reminders from @BungieHelp on Twitter, and additional messaging through Destiny.
PLEASE NOTE: We are unable to restrict access to the Weekly Crucible Playlist during this time period. If a player completed a match on March 28 between 2:00 AM Pacific and the release of Destiny Update 2.6.0 at 10:00 AM Pacific, they will not earn the new Treasure of Ages reward from this activity until the following weekly reset.
The Mountaintop Crucible Quest to be retired with the Age of Triumph
With the release of the Age of Triumph, The Mountaintop Crucible Questline will be retired and may no longer be completed in full. Players may complete any Quest steps that are actively held by Characters after the release of Age of Triumph but will not progress to any further steps.
For example, if a player were to complete the Quest step Factions, they will no longer progress to the following Quest step, Trials Practice. Once this Questline has been retired, The Hothead Legendary Rocket Launcher will no longer be obtainable. Additionally, Weekly Crucible Bounties will no longer require completion of this Questline.
2.6.0 Preview: Addressing Known Issues
The following issues will be addressed with Destiny Update 2.6.0:
If you continue to experience any of these issues after Destiny Update 2.6.0, please report to the #Help forum. Destiny Player Support will be actively monitoring for reports of these issues to forward for investigation.

Patch Notes Preview
These next three modules belong to your Community Manager. Check out the details, the people, and the media he’s been tracking.

Cozmo: The Patch Notes for update 2.6.0 are locked, loaded, and ready to go. As always, we will post them along with the update on March 28 around 10:00 AM Pacific. Here is a little preview of a few changes you can expect to see next Tuesday.

That’s just a taste. The rest of the notes will appear on the blog, like they always do when you need something to pass the time while the download wheel turns.

Cozmo: Another member of our community has volunteered as tribute for the weekly ritual of the Bungie Bounty. Ms 5000Watts will be your target. Try to find her in Clash. If you find yourself on her opposing team, watch out. Her aim is true.

The rules are the same. Match into her game and win to claim your Emblem. It should arrive in your Emblem Collection later in the week. For more details check out our Bungie Bounty FAQ.

Cozmo: Every week, a monsoon of new movies from the community crashes onto our shores. We pick our favorites from the beach and share them with you in something we like to call Movie of the Week. And yes, we totally thought of the name ourselves.

Anyway, if you see your video below, you and anyone who helped you (within reason) will be rewarded with a shiny new Emblem. To get your chance to see your video in the spotlight, submit your work to the Creations page.
And this week’s winning movies are...

Movie of the Week:  Vault of Glass

Thanks for following the conversation over these past few weeks. Age of Triumph has been our work, but it’s about to become your play. That’s always the best part. We’re ready to stop talking and start listening.
We’ll be watching, too. Week after week, we’ll have another Raid to revive. Week after week, you’ll have teammates to revive.
The Speaker will be waiting for you in the Tower, with one more Destiny 1 Quest.
DeeJ, out.
p.s. You were expecting something else? One milestone at a time, Guardians...