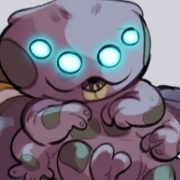 Flashing in game since Beyond Light is worse and makes me more prone to seizures.

Ever since Beyond Light launched and something changed with how light and flashing works in-game (I'm on PC), [b]the flashing in-game has been much more violent and given me more absence seizures than before release[/b]. Examples include: * Flashing puzzles given to certain content creators on Twitter that were then shared everywhere and I had to be warned about. * Striker titan flashbang grenades in the crucible. * Striker titans wearing Dunemarchers and mowing down a group of ads in a darker environment, such as in The Scarlet Keep. * The entire boss fight in The Hollowed Lair, and most anything with the larger Scorn who shoot lightning. I had to sit my character in a corner and let my two fireteam members finish the strike the first time. Now, I leave whenever the strike appears in the rotation because I can no longer do the strike with any guarantee to my own safety. * Ether tank explosions. * The Presage mission. The flashing filaments in the dark hallways, the scorn in the dark with lightning, etc have prevented me from doing the mission myself more than twice. Both times I had seizures and had to stop. My girlfriend logs in for me now and does the mission so I can finish the lore book. * The primary ammo bricks in The Shattered Throne and other ascendant realms flicker enough that it just hurts my eyes. Get enough together after spending time in the thrallway, boss fight, etc and it can become a problem. The main issue is just how flashy everything has become. I know it looks great, and you should be proud of what you've accomplished with how fantastic the game and lighting look, especially on a PC with uncapped frames and ultra graphics. But, this change is barring me (and it can't just be me) from playing certain parts of the game because it's an actual hazard to my health. If it doesn't outright give me a seizure, it definitely gives me a headache, and I know others who have complained of the same issues. It's particularly bad in places with high contrast between lightning/flashing (from enemies and guardians) and a darker backdrop. This isn't the rule, but it is a pattern. Is there a way you could add a filter or a slider to the game to dampen the amount of flashing? Or at least go back and try to tune it? I'm sure this wasn't intentional. I'm afraid to go into new missions now because I have no idea what to expect. Please help?
English
#Help #gameplay #health #seizures #Lighting #Flashing
Comment Reply Start Topic
Report