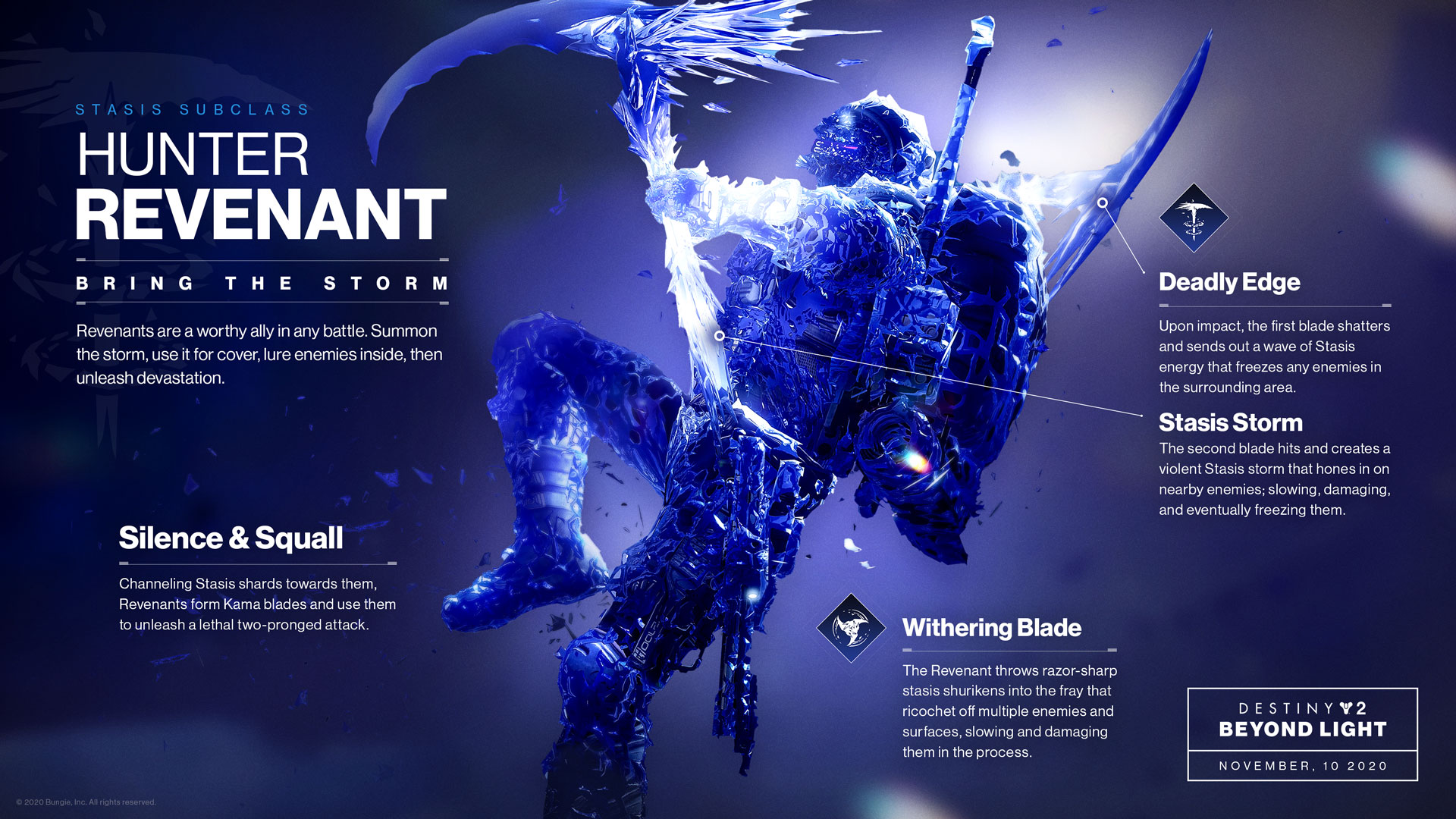 Welcome to this edition in our series of Stasis spotlight articles where we’re examining Stasis via each of the three Guardian classes in Destiny 2. Earlier in the series, we featured the Warlock Shadebinder and the Titan Behemoth. In this final article of the series, we’re focusing on the Hunter Revenant.
--

One of the most important parts of developing Stasis and its accompanying Guardian subclasses has been in defining each of their fantasies. The team has spent a great deal of time iterating each subclass, starting with the fantasy that instantly summarizes the experience. In some cases, that comes with ease. For example, the fantasy shorthand for the Warlock Shadebinder was established early on as “ice wizard.” From that simple phrase, anyone could instantly conjure the image in their mind of what it would be like to play as a Stasis-powered Warlock in Beyond Light, summoning your Stasis staff and unleashing dark energy to freeze opponents.
Other times the fantasy evolves over the course of many discussions, iterations, and playtests. That was the case with the Hunter Revenant subclass which went through many iterations before we aligned on the “ninja” archetype. The result is an amazing Stasis experience that we can’t wait for Hunter fans to try for themselves. 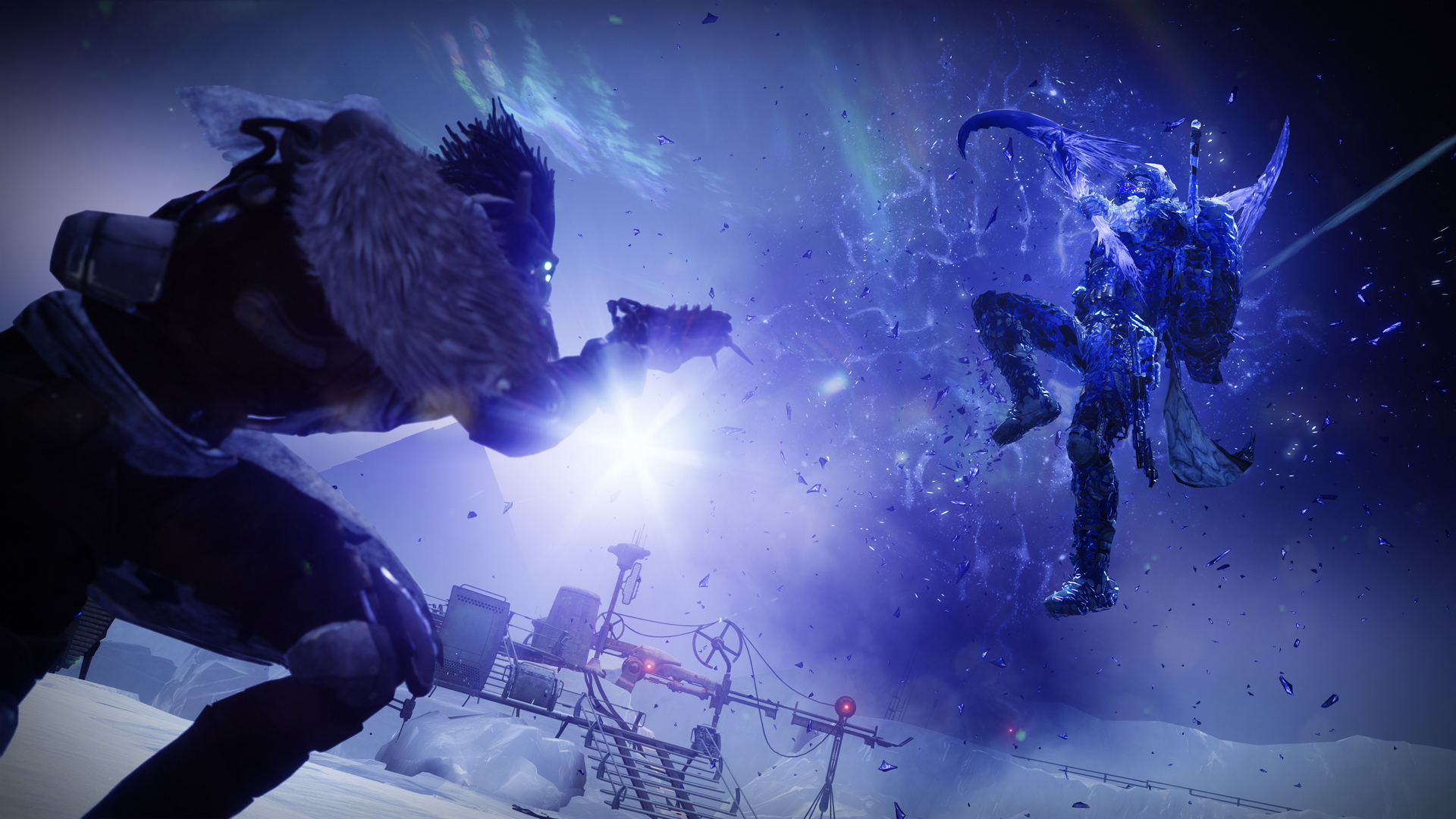 Early on we knew that the Hunter would embody the idea of slowing the battle around them with their Stasis powers. That starts with Withering Blade, the Hunter Revenant’s melee attack. The player throws a deadly Stasis shuriken into the fight; it ricochets off surfaces and enemies, slowing and damaging them along the way. Land two shuriken on the same target and that enemy will be instantly frozen.
When fully charged with ability energy, the Hunter Revenant can unleash their deadly Super – Silence and Squall. Named after the pair of Kama blades that the Hunter summons, this Super involves a two-pronged attack, with each Kama blade having a different function. The first blade, when thrown, immediately detonates on impact, freezing enemies in a radius from the center of the blast. Hurl Squall, the second blade, and it will embed itself in a surface (or an enemy) and then detonate, creating a Stasis storm that will track nearby enemies, slowing and damaging them as it makes contact. 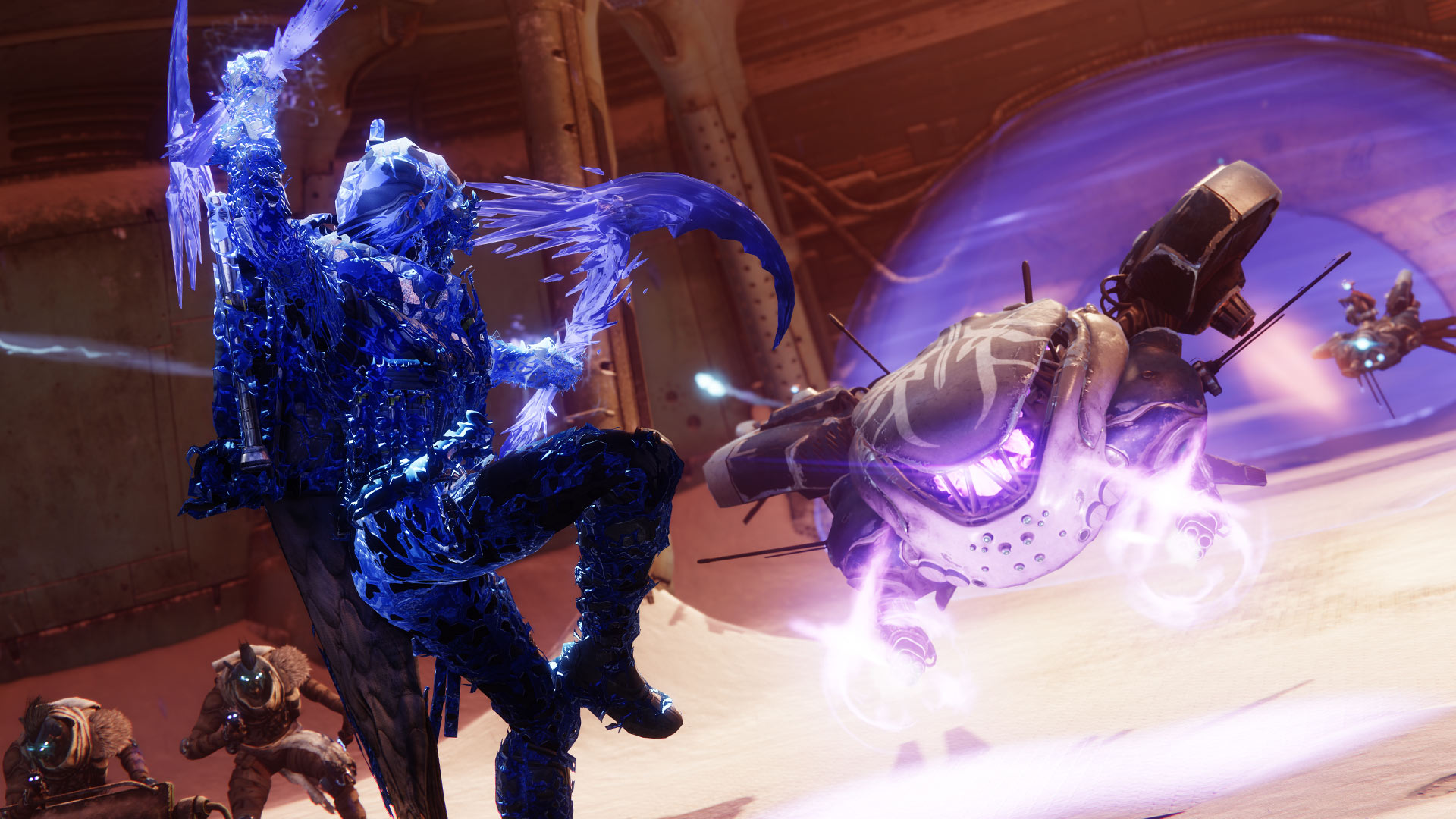 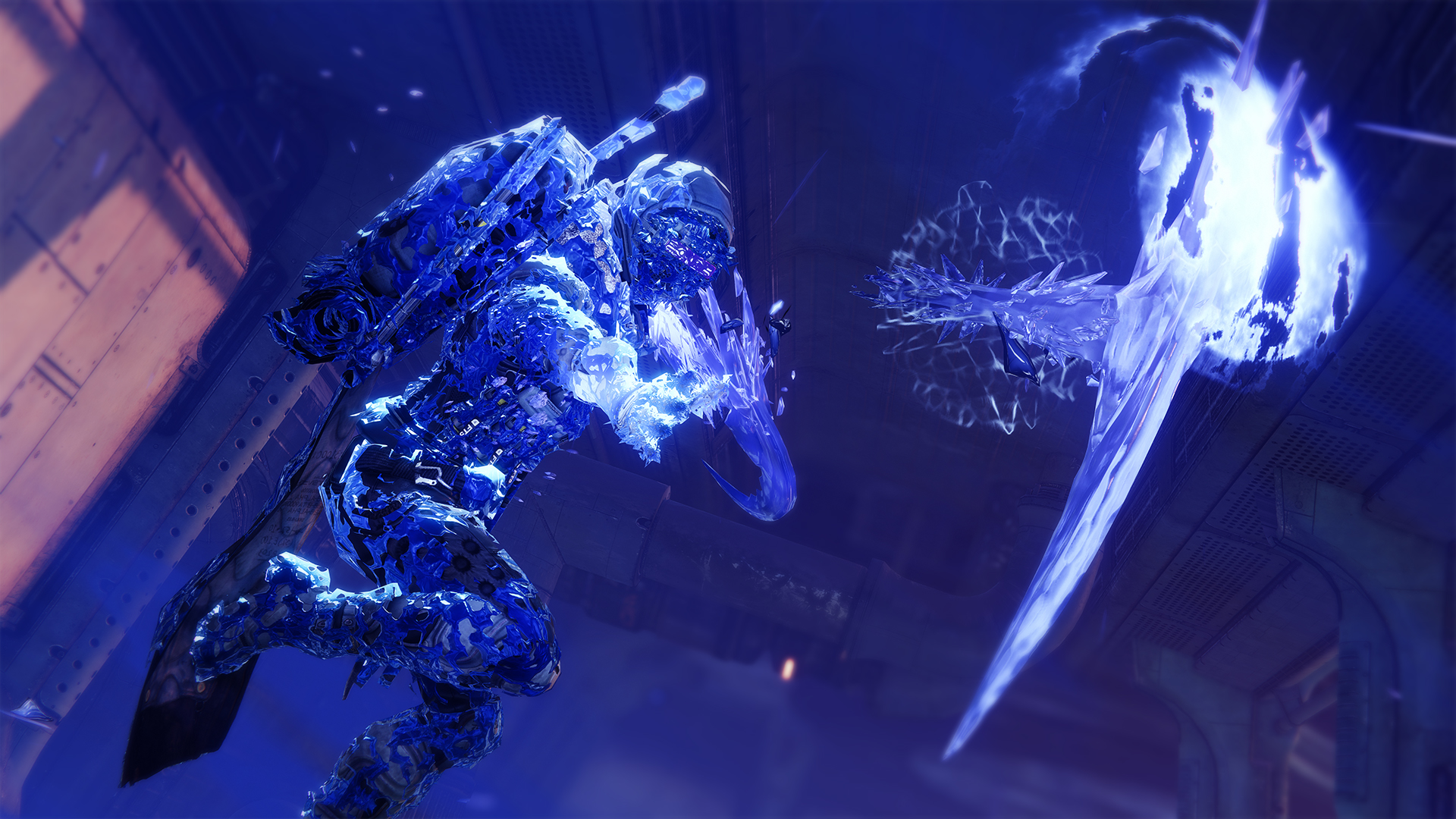 As is the case with the Warlock Shadebinder and the Titan Behemoth, players using the Hunter Revenant will also be able to customize their Stasis powers over time using Aspect and Fragment slots (check out our Warlock Shadebinder article for more detail on how Aspects and Fragments will work), including, for example, a Hunter-specific Slow Dodge Aspect that will allow the Revenant to temporarily slow nearby enemies each time they perform a dodge. 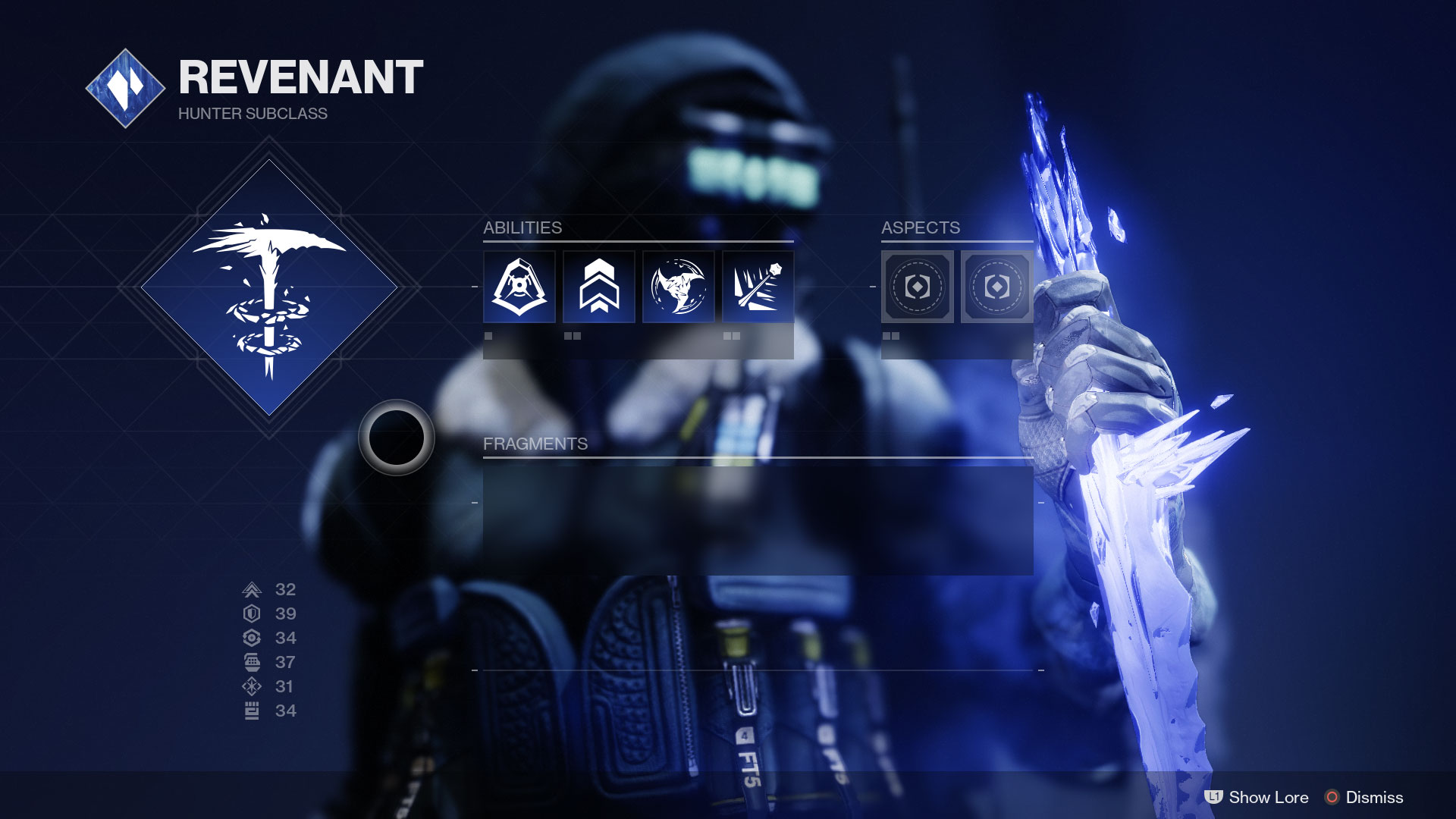 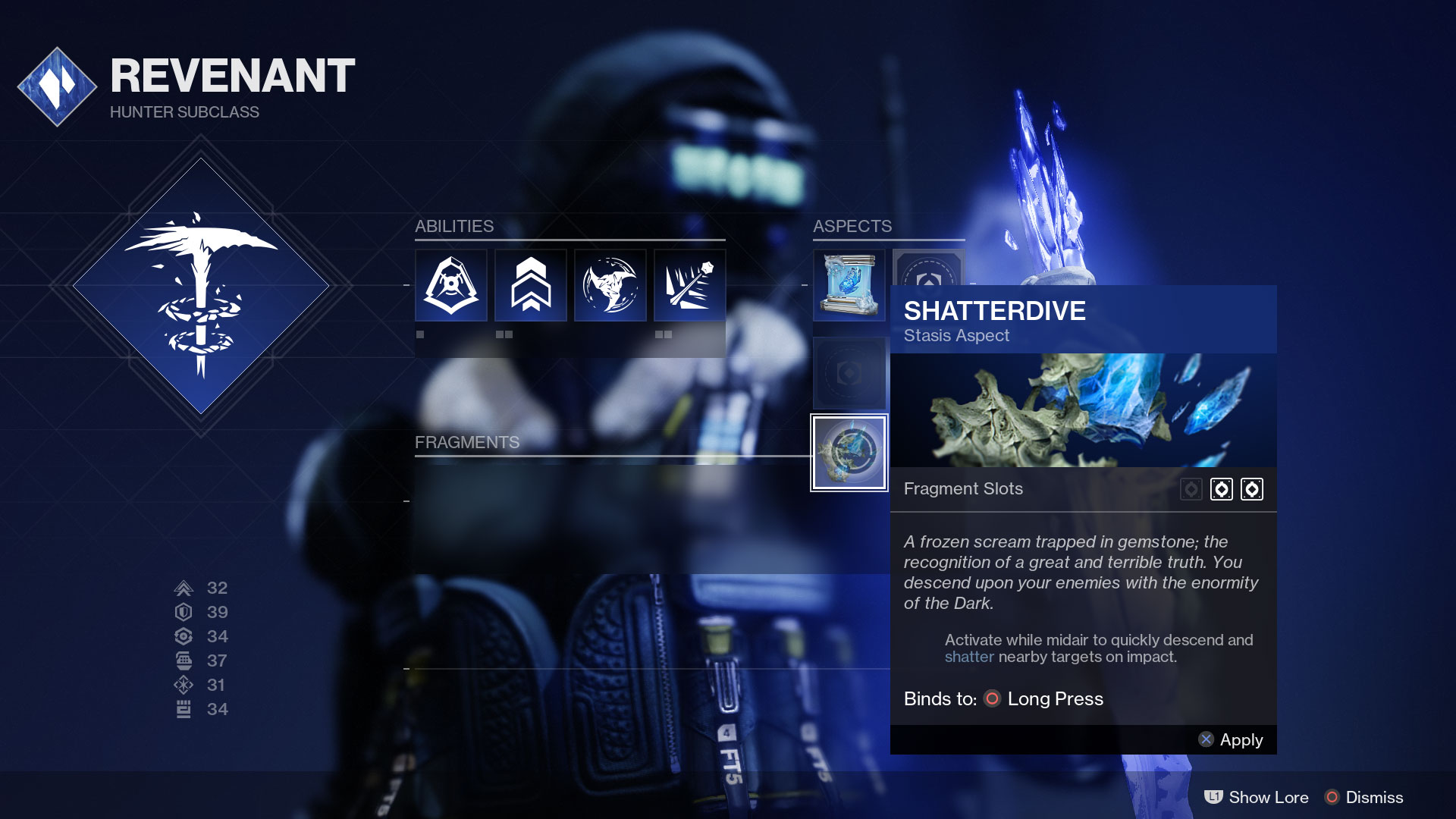 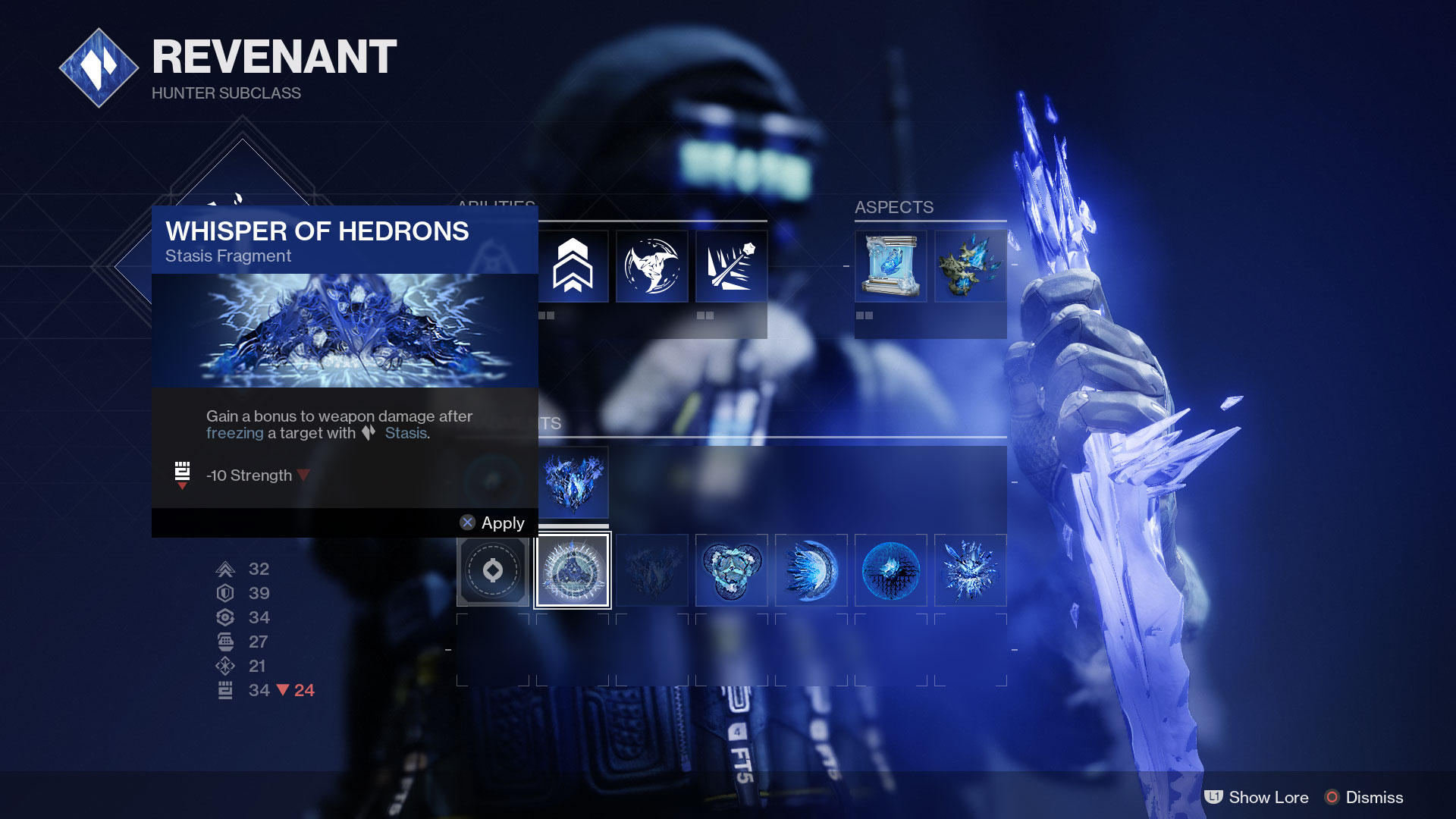 Apart from the intrinsic Stasis abilities that will be a part of each subclass, all Guardian classes using Stasis will have their choice of a variety of Stasis grenades to use in combat:
Glacier Grenade – Upon contact with the ground, a wall of Stasis crystals instantly burst from the earth and nearby enemies are frozen inside Stasis crystal. These grenades have multiple uses – from encasing enemies to creating cover. When destroyed, the crystals will create AoE burst damage to nearby enemies.
Coldsnap Grenade – Upon impact with the ground or an enemy, this grenade unleashes a wave of Stasis energy that races along the ground in the direction of the closest nearby enemy, freezing them and then searching out the next nearby foe. You can freeze up to three enemies with a single Coldsnap Grenade.
Duskfield Grenade – Duskfield Grenades create powerful Stasis fields that suck enemies into them when forming. Once an enemy is caught inside, they will be slowed and, if unable to make it out in time, frozen in place.
All three of these grenade abilities show the potential of Stasis to change the way you fight in Beyond Light. Slowing and freezing enemies have obvious advantages, and we’ve put a lot of effort into thinking about how Stasis affects combat in both PvE and PvP situations, including things like how often you can freeze a foe and how long those freeze durations last.
The ability to create new geometry with Stasis is also an exciting new addition. With a well-timed Glacier Grenade, you can now create Stasis crystal formations that can perform double duty as platforms. Players are going to use this new power – be it in the form of a grenade or a Super – to gain easier access to tough-to-reach areas, create new lines of sight, and even do things that we could never predict.
Wielding Stasis is going to be an unprecedented change to Destiny 2. This is a new take on elemental power, where the path to victory is found through controlling the enemy and the pace of the fight instead of through brute force and damage. With Aspects and Fragments, we’re also giving players a new level of control over how they customize their Stasis experience.
For more on Stasis, check out our Stasis hub page here on Bungie.net.