Jun 21, 2018 - Cozmo_BNG
This week at Bungie, we welcome back the Factions.
Everyone is back from E3, and we’re heads down, working hard on Forsaken. Several thousand players already got to play Gambit, and we’re extremely excited for more to play it, both at GuardianCon and when Forsaken releases on September 4.
Meanwhile, the Iron Banner rages on. You have the rest of the week to rank up with Lord Saladin and earn the Season 3 ornaments for your gear. Make sure you turn in everything before the reset on June 26 at 10 a.m., or you will have to wait until the next Iron Banner to claim your rewards. Your tokens and ornament progress will carry over.

What Is Dead Orbit May Never Die

As one event winds down, the next one ramps up. Faction Rallies is starting up again. Dead Orbit dominated the first event of Season 3. We will see if they defend their position at the top, or if New Monarchy or Future War Cult step up to take their spot. Faction Rallies will be available Tuesday, June 26, at 10 a.m. PDT through the following weekly reset.
In a previous TWAB, we told you that Winner’s Offering weapons would be added to the event reward pool after the first event. That was incorrect for Season 3, which will operate differently than past seasons. During this season, the factions will continue to feature their original Winner’s Offerings for all three events.
If you didn’t make it to Rank 50 with your faction of choice during the first event, you can pick up where you left off by pledging to them again. Or you can opt to start up with new blood, but remember that your pledge is account wide. Choose carefully.

Last month, we did a tuning pass on Exotic armor in Update 1.2.1. We’ve been working on more changes to more gear and wanted to give you a peek at which armor pieces we have plans for next. Here is Sandbox Designer Victor Anderson with the details.

Victor: We’re bringing another set of changes to Exotic armor with Update 1.2.3. As we continue to iterate on Exotic armor, we hope that you will also continue to provide feedback. You’ve heard the goals from the last TWAB, where we introduced the changes, so let’s get right into them.
Like the Update 1.2.1 changes, anything written below is in addition to any existing benefits that the Exotic already provides, unless it’s explicitly mentioned otherwise.

There are some relics of a different time still being hosted on our servers. Next week, we're retiring a few legacy services from the Halo era and consolidating others. Resident Archivist Roger Wolfson will explain what's changing and how it may affect you.

Roger: We're doing some (once a decade) spring cleaning on the halo.bungie.net site. First off, it's time to retire those old, read-only forums. If you have some archived threads bookmarked that you like to revisit for nostalgia purposes, please take some screenshots before we say goodbye to those forums.
Do you remember Bungie Pro Video? We said back in 2008 that we'd keep your renders available to download for a couple months. Ten years later, we're getting around to cleaning them up, so grab anything you want to keep around in the next week. Finally, the "details" views of old Halo matches will be trimmed down to just the line-item scores; your career pages will still have your overall medals chest, but individual games won't.
These changes go into effect on June 28 at 10 a.m. PDT. If you need to save anything, get it done before then.

Watchers on the Wall

The Destiny Player Support team keeps watch over the health of the live game. They were quick to respond to a few issues that rose up this week. The full details are in their report below.

Fighting Lion and the Iron Ornament Bundle
Destiny Player Support investigated an issue impacting players who purchased the Iron Ornament Bundle on Tuesday, June 19, in which the included ornament “Lupus Visage” did not properly unlock on Fighting Lion after it was activated.
We have identified all impacted accounts, and this issue will be resolved for all affected players in an upcoming hotfix. To prevent further impact until a hotfix is deployed, this bundle has been pulled from the Eververse Trading Co. storefront.
In the meantime, players who have successfully equipped this ornament will not be impacted as long as they do not unequip the ornament or dismantle the specific Fighting Lion that the ornament has been applied to.
For players who encounter this issue before the hotfix is released, here’s what you should expect when this hotfix is available:
For information on when this hotfix will be available, players should follow @BungieHelp on Twitter, monitor our support feed on help.Bungie.net, and check our pinned thread in the #Help forums.
Battle.net Maintenance for European Players
On June 20, between 02:00 CEST and 07:00 CEST, our partners at Blizzard Europe conducted scheduled global authentication maintenance. During this maintenance, European players were unable to login to Destiny 2 on Battle.net.
For notices regarding scheduled maintenances before they occur, players should follow @BungieHelp on Twitter or monitor our support feed on help.Bungie.net. For issues related to Blizzard services, players should reach out to Blizzard Support.

It’s summertime, which means big blockbuster movies. We've got our own movies to show off, pulled straight from the Creations page. So grab your drink and snack of choice, and find a seat. It’s show time.
Movie of the Week: Foreshadowing
Honorable Mention: Unusual Reward

Before we go, here are the top scores for last week’s Nightfall, Will of the Thousands. 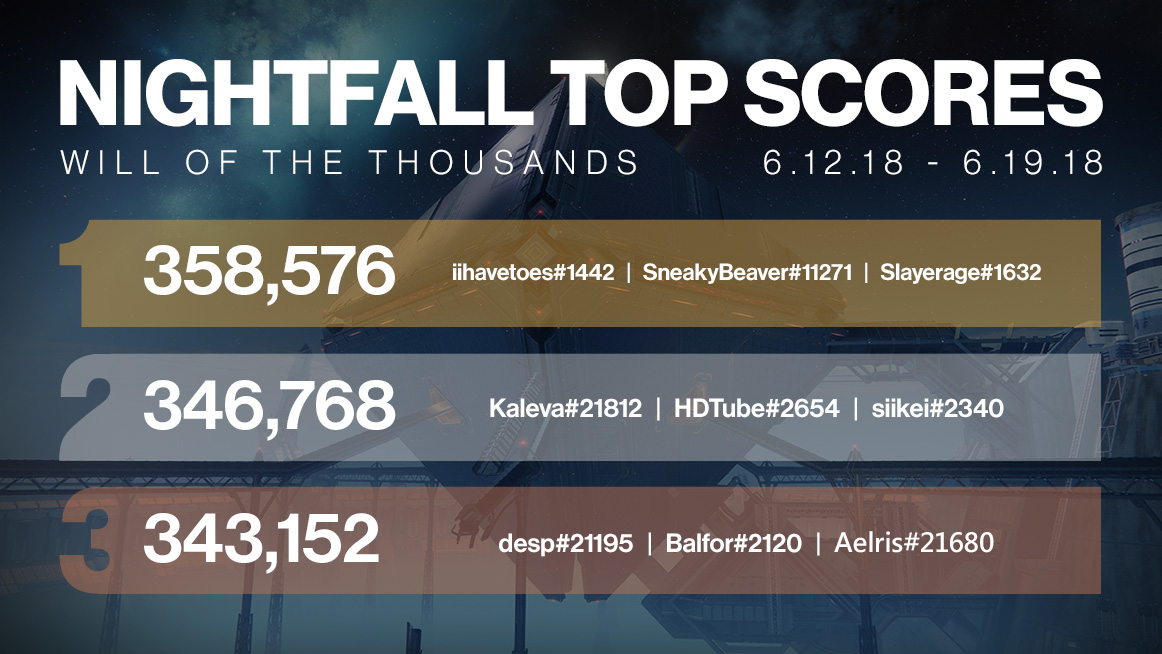 I don’t know about you, but I’m excited about the armor changes. I plan on running a lot of Lucky Raspberry in PvE. Let us know what you're looking forward to, and give us any feedback you have on the upcoming changes.
We'll be back next week with some more info on Update 1.2.3. See you in Iron Banner.
<3 Cozmo