Dusting off the bounty book

Apr 5, 2018 - A_dmg04
This week at Bungie, there was a bit of Mayhem in our studio.
In a ritual as old as the Crucible, a bounty was placed on the heads of a Bungie Fireteam – this time, in the Mayhem playlist. If the community managed to defeat us, they would earn the Sign of Mutual Combat emblem. Somehow, we didn’t do that bad!

The air was supercharged for the duration of our two-hour stream. I learned how to play a Warlock and Cozmo did his Hunter thing. Twenty of you earned your prize. As for the rest, better luck next time.
Throughout the carnage, Sandbox Design Lead Josh Hamrick and Senior Crucible Designer Kevin Yanes answered questions sourced directly from the community. If you missed the stream (or want to revisit the developer commentary on the hot-button issues), read on for details.
Queue and Answer

We thank all who took the time to send questions in. This won’t be the last Bungie Bounty, not by a long shot. Cozmo and I are putting our heads together to figure out a time, place, and topic for our next bout. We’ll be in touch. Catch us if you can.
Oh, and we did have some emblems to pass out. If you bested us, check your Emblem Collection for your reward. Thanks to all who faced us in battle. If you’d like to watch the bounty stream, it has been archived at Twitch.tv/Bungie.
1.1.4 Retrospective: Weekly Crucible Playlists
Last week, Update 1.1.4 introduced the Weekly Crucible Playlist. For the first game type, Rumble served up some 8-player free-for-all combat where players had to watch their own backs, because no one else would. Monitoring feedback throughout the week, we noted quite a few players reporting that the mode felt a bit crowded. We tracked down PvP Design Lead Derek Carroll to give us some details on the goals of the Weekly Crucible Playlist, and what we can expect moving forward.

Derek: With a week's worth of Update 1.1.4 in the wild, the PvP team can take a step back and see how we did.
One thing we like about the new rotating weekly playlist is that it gives us the ability to add things and make changes without shaking up the core of the Crucible. We'll be using that playlist to try out new modes and events in the future.
Rumble came to Destiny 2 in a big way, and depending on your tastes, you may have found it too big. We tend to agree, so the next time Rumble rolls around, you'll find a bit more room to breathe. We're lowering the player-count to 6, and altering the spawning policy behind the scenes in an attempt to keep players more evenly spaced out. These changes are the first steps towards an even better player experience that we expect to drop when Season 3 begins.
Iron Banner's next appearance is an exciting one for us. In conjunction with the Sandbox tweaks, we made changes to the version of Control you've been playing in Destiny 2 to increase intensity and give players more choices during gameplay. Right off the bat, you'll see that there are no zones held by either team at match-start. With six players on each team, you’ll have more flexibility to decide your opening moves. Once you're capturing, you'll notice that the more players you have (up to 3) in a zone, the faster it switches sides. There's risk/reward here, as Supers are more prevalent in version 1.1.4, and you don't want to be caught with all your eggs in one basket. If you participate in a capture, you'll get more Super energy yourself, so grabbing zones is a great way to power up for your next big play.
Until the Banner is lit next week, please enjoy the utter chaos of Mayhem, now with 25% more Super-powered insanity.

Feedback collection doesn’t stop here. As you play your way through Mayhem, continue to give us your thoughts! Cozmo and I are on the front lines, translating your feedback to the development team as it comes in. We’ll be at the ready to collect more of your thoughts and feedback next week, when Iron Banner 6v6 goes live.

UPDATE - 4/6/18: Iron Banner 6v6 is being postponed due to a late-breaking issue. Next week, Rumble will go live in its place while we work on a fix. Iron Banner will return as soon as we can deploy a fix. For more information, see this post.
With Update 1.1.4, Iron Banner now features 6v6 action. All Season 2 Iron Banner weapons will be available from Lord Saladin through either Reward Packages, or direct purchase using Iron Banner Tokens.
Begins: 4/17/18 10 AM
Ends: 4/24/18 10 AM
The game is Control!

With 6 enemies to choose from, you may find more opportunities to earn progress towards your Season 2 ornaments. Good luck out there.
Rare Air
If you follow the conversation that ricochets between the leaders of the Destiny community (and why wouldn’t you?) you may have heard that we invited some of them to visit our studio. Later on this month, we’re hosting a Community Summit, right here at Bungie. Now that our guests have had a chance to break the story, we want to let you know what this moment means to us.

DeeJ: Our goals for this gathering are to get people from the community more involved in the way we make games, and to do that sooner in the creative process. We’ll be previewing some of the things we’re working on to gather feedback before they’re locked. Our guests will also play some things that you’ll get your hands on in the coming weeks. We’ve hosted community ambassadors before to see and capture new content, but this ain’t DRE (the Destiny Reveal Event). This gathering is more intimate and more tactical.
It must be said that it would be absolutely impossible to invite every single person in our community who is insightful or influential. The guest list is not a measure of who is important or who is relevant. For this gathering, we tried to select a good cross-section to represent all kinds of Guardians. Some of them are familiar faces. Others are new voices that we want to know better. Some of them are leaders with large constituencies. Others are solo players we have come to know with strong opinions. We’ve targeted the hardcore elite who have mastered every challenge and the average players with a deep love for the game. We’ve invited cooperative raiders, competitive warriors, lore lovers, and a high-school principal to make sure they all get along.
This is a new step we’re taking to be more collaborative, more transparent, and a little less worried about keeping secrets. This is not the first time we’ve welcomed players to see where we work and meet the people who make our games. It won’t be the last.

We’ll Do it Live

With Update 1.1.4 safely landed, Destiny Player Support has been on watch to identify trending issues reported by the community. Here’s a roundup of what’s surfaced in the last week and a half:

1.1.4 Known Issues
Hotfix 1.1.4.1: Maintenance and Downtime
On Tuesday, April 10, Destiny 2 Hotfix 1.1.4.1 will be deployed to address Tower and Raid blackscreen issues. Additionally, Rumble player count will be reduced to 6 total players.
There will be a short period of maintenance before this hotfix becomes available. For times, please see below:

If you encounter any issues once the maintenance period has completed, please post a report to the #Help forum detailing your experience.
The Perfect Shot(s)

This week, we’re putting the spotlight on someone who’s taken it upon themselves to not only apply a massive handicap during a Prestige Nightfall, but also opted to take the whole thing on by themselves. If you’ve been wondering “how does the Arcstrider feel after Update 1.1.4?” – tune in to find out:

If you’d like a chance to earn the Lens of Fate emblem, make sure to submit your video to the Creations page on Bungie.net and include #MOTW in your title.
Next week, we’ll be updating the Developer Roadmap to address some of the topics discussed during the bounty stream. Our forecast will be extended into the summer (and beyond) to give an idea of what is to be expected as we continue to evolve the Destiny 2 experience.
Before we go, a quick shout out to the top-scoring players from last week’s Nightfall. We’re watching the scores climb higher and higher while players hit Lost Sectors during their activity – but this strategy will only last until 1.2.0. Ge those points while they’re hot! 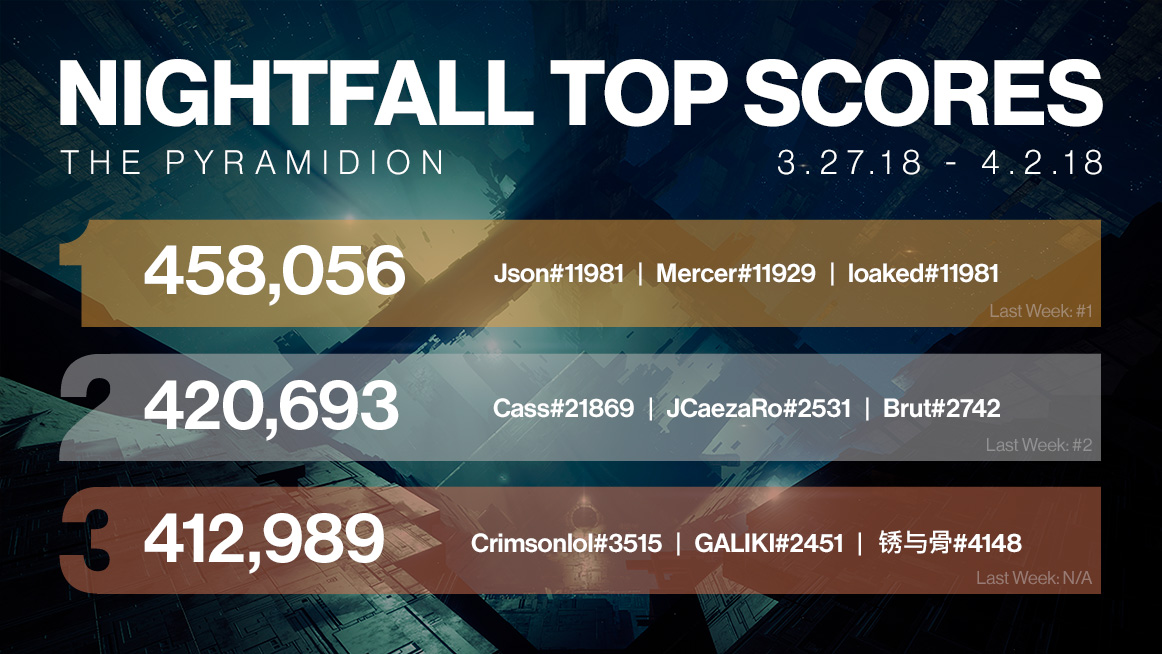 As always, thanks for playing, and we’ll see you next week.
Cheers,
-Dmg04