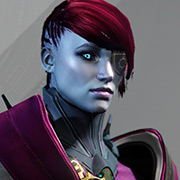 SpoonieEzMode
Unfortunately, copyright laws come into effect at that point. Even when watching a stream, if there's music playing, that will get muted by most streaming. Unfortunately, we can't have nice things. In D1 (which I've bought recently, because I wanted to have a look at it) there's a shady bar area with a jukebox. And I straight up go down there regularly just to press that button and press /dance. I get why it isn't in this game now however...when someone goes around and reports your own videos for copyright violations to the point you have to get a court order, anything that might be considered Original Art or covered under copyright rules would be nightmare. I worked in a lawfirm that was at the forefront of copyright and Intellectual property law when it was first being done in the 90s. It was a minefield then as courts essentially were making laws up as we went, and it's only become more convoluted now. HOWEVER: there's all kinds of features for making a playlist and then sharing it on discord, and I'm sure if streamers or industrious clans were feeling creative, you could bash together a playlist on Tidal for a dungeon that you compile, share out the list and then everyone could be kicked into the stratosphere by Rhulk to some banging tunes.
English
評論 回覆 建立主題
檢舉