12, set 2019 - A_dmg04
This week at Bungie, we’re looking into the near future.
We’ve talked a lot about how Shadowkeep will change the way we play Destiny, and we’re not even done yet. We’ll have more to say before October 1 about how the game is about to evolve. There might even be a final pre-launch Bungie ViDoc about Year Three next week, but that’s not my promise to make. Keep your eyes up.
Seeing Guardians rejoin Eris on the Moon for a new adventure is not the only thing we’re looking forward to when we daydream launch day. As this new campaign against the minions of the darkness begins, a new Season of Destiny gameplay will begin with it – followed by three additional seasons of updates. We’re about kick off a whole new year of explorations, rewards, and surprises.
But not everything should be left to surprise. We know that Guardians like to plan their gaming sessions. This calendar shows what’s coming free to all players of Destiny 2, what’s in store for Shadowkeep, and what’s included with Season of the Undying: 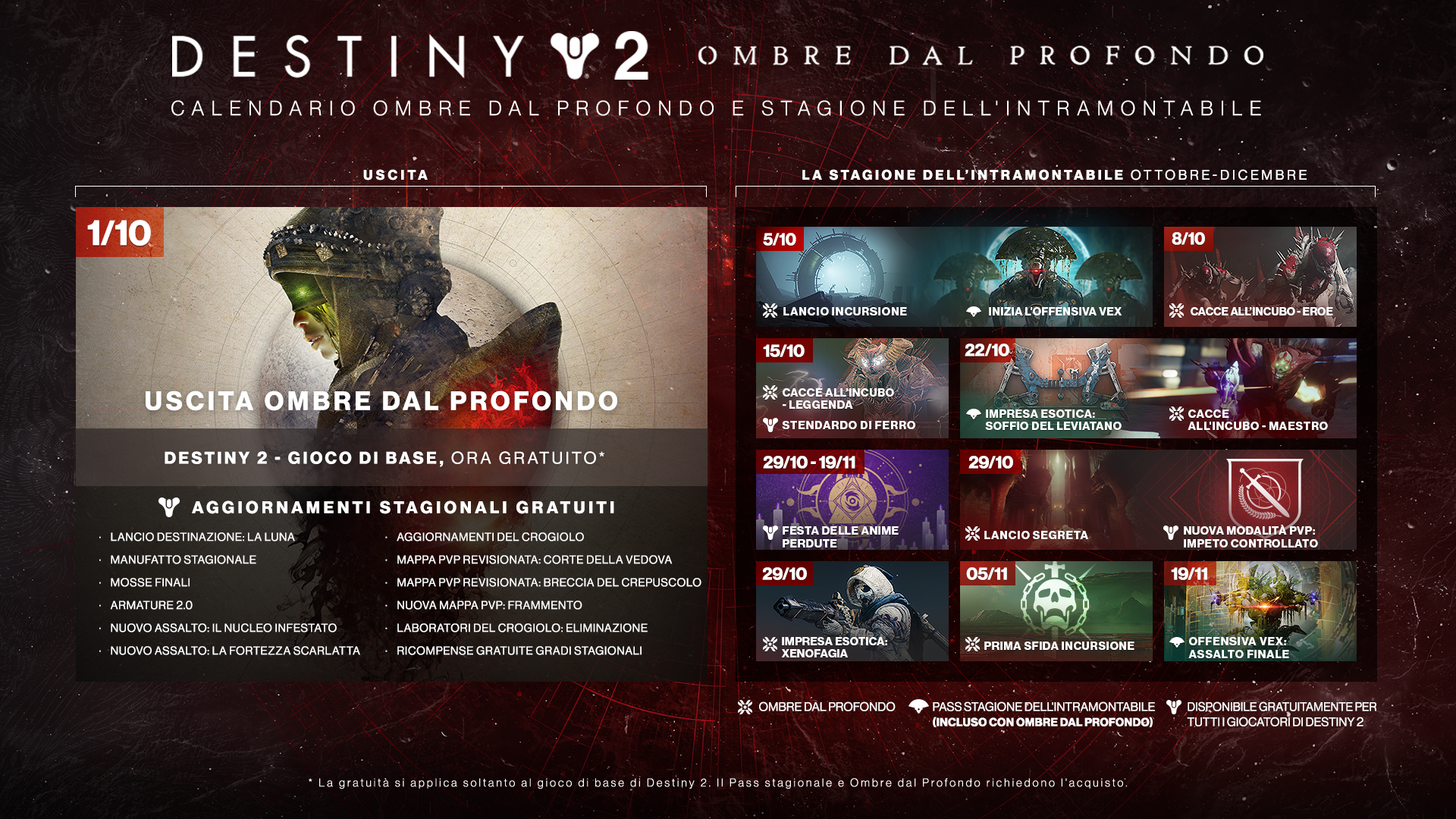 Image updated 9/17
Save these dates! If you’re not one to over-plan your life, you know we’ll keep you up to date from week to week on what awaits you in the game. That’s just what we’re about to do right now.

Last week, we did a bit of a deep dive on upcoming changes to abilities in Shadowkeep. This week, we’ll be giving a patch note preview on how your weapons will be fine-tuned. For this pass, the team put some love in to a few Exotics that may have been collecting dust in your vaults. On top of that, a bit of tuning has been done in how damage is applied to different targets in PvE environments.
In terms of how these changes will impact your PvP experience, a few weapons and archetypes are being buffed, with some seeing more aggressive range falloff to give breathing room to Scout Rifles and other weapons.
Combatants - General
Weapon Changes - General
Exotics
Perks
We still have a few TWAB’s before the release of Shadowkeep, which will shore up our patch notes previews on a variety of topics, ranging from Black Armory Access to bug fixes. Stay tuned!

Destiny 2 Update 2.5.2.2 recently brought some frequently requested Quality of Life changes to Reckoning and rewards. Next week, we’ll be making one additional change to the experience, further bridging the gap between you and your desired rewards. 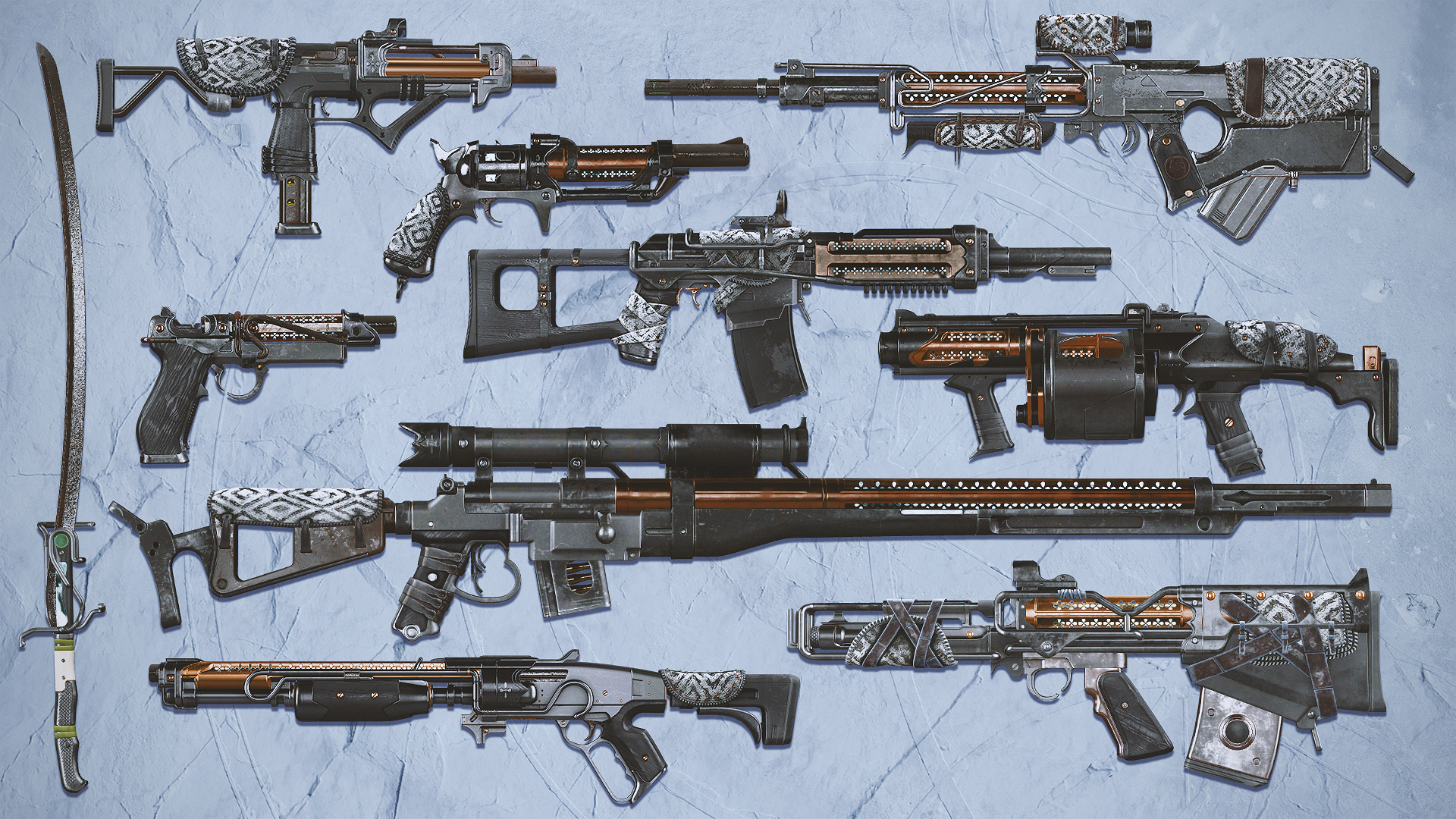 Starting on September 17, all negative modifiers will be removed from Reckoning. This activity will continue to feature a weekly singe, with a daily rotation of Brawler, Grenadier, and Heavyweight. Our goal in this change is to improve the replay-ability of Reckoning, so players will feel more inclined to hop in to matchmaking for some sweet loot. This should also help to address some feedback items from players that specific modifiers could feel too punishing (We’re looking at you, Blackout Darkblades).
If you’re looking to get your hands on some weapons from Season of the Drifter that have eluded you, I reckon this is your time to shine.

Fresh on the heels of Update 2.5.2.2, we’re prepping 2.5.2.3. Destiny Player Support already has your itinerary prepared, so you’ll be prepared for the upcoming download.
This is their report.

Destiny 2 Hotfix 2.5.2.3
Next week, Hotfix 2.5.2.3 will become available to players in Destiny 2. This hotfix targets an issue which is currently preventing a subset of players from enabling Cross Save, and marks the removal of negative modifiers from The Reckoning.
For deployment times when they are available, follow @BungieHelp on Twitter or monitor our support feed on help.bungie.net.
REMINDER: Steam Linking and PC Migration
For the next several weeks, we’ll be reminding PC players to link their Steam accounts to their Bungie.net profile, in preparation for our migration to Steam on October 1.
From October 1 onward, any existing PC player who links a Steam account to their Bungie.net profile will automatically be migrated forward to the Steam ecosystem.
To prevent the unintentional loss of Guardians, game licenses, and Silver, it is imperative that all PC players make sure they are linking their correct Steam account to their Bungie.net profile.
REMINDER: Destiny 2 and Silver Purchases on Battle.net
For the next several weeks, we’ll also be reminding players that Destiny 2 game content and Destiny 2 Silver can no longer be purchased from the Battle.net Shop.
Existing PC players can continue to play on Battle.net until Destiny 2 migrates to Steam on October 1. At that time, new players are also welcome to jump in with the launches of New Light and Shadowkeep.
Additionally, every existing PC player should be aware that in order for recent Silver purchases to successfully transfer to Steam, players MUST log in to Destiny 2 on Battle.net before October 1 to claim their purchased Silver.

Saw something Husky happen on Mars

Imitation is the sincerest form of flattery. For some of you Destiny old timers, Husky Raids began a trend in content creation, staging wonderful music videos on the destinations of Destiny. They inspired many to dance to their favorite tracks from the methane seas of Titan to the rocky outcroppings of IO. This week, our runner up is an homage, and we loved every second of it.
Our selection for Movie of the Week just barely edged a win, thanks to some killer tunes and a wonderful array of action from the last two years of Destiny 2. Some of the clips may bring forth wonderful memories before we take our first steps into Year 3.
Movie of the Week: Princes of the Universe

If you’d like to put your name in the hat for Movie of the Week, make sure to post your content to the Community Creations page on bungie.net, or throw a video to myself or Cozmo on Twitter.
This week was home to Destiny’s 5th year anniversary. As I (might) still have your attention, I’d like to tell you a quick story. Five years ago, I was your average Bungie community member. I worked a retail job in San Diego, playing videogames into the dead of night and enjoying time with the communities therein. I had a few ideas on a future, ranging from Architecture to Graphic Design, but wasn’t set on anything just yet. The summer before Destiny shipped, DeeJ shot me an email asking if I wanted to help show off Destiny’s upcoming “Crucible” PvP environment at E3. It was a gamer’s dream, going to E3 and playing a new game early, surrounded by folks eager to see the new stuff. Not only did I meet some wonderful people that I have the pleasure of working with today, I had the opportunity to make some friends from other corners of the Bungie community.
A few days in, I was introduced to a very tall man that went by the name of Cozmo. He was funny, somewhat awkward, and seemed to be the type that would throw something at me for no good reason at all. All things considered, I thought he was a pretty nice guy. He’d just made a new subreddit to follow the development of Destiny. While most of what could be found was purely speculation, it had already grown into a small community. There are many parts of the story that I won’t bore you with, but it was the beginning of a wonderful friendship that holds to this day. Destiny has always had that quality about it, making friendships a sort of loot that could be acquired through pure luck. End of the day, I’m glad to have found a perfect roll for a fellow Community Manager, even before we had applied for the gig.
Thank you to everyone who shared their stories on how a game could positively impact their lives. That’s one of the things about community that we love most, and we appreciate that you’re a part of ours. With 5 years behind us, it’s almost time to take our next step. Two TWAB’s and a weekend stand between us and Shadowkeep. Feel free to start counting the sleeps.
Cheers,
Dmg04