Dec 9, 2021 - Cozmo_BNG
This week at Bungie, we’re celebrating our 30th anniversary!
As you may have noticed, we held back a lot of what we had planned for 30th. There were a lot of questions about when the trailer would go live, but we saved it until just a few hours before launch to keep the spoilers to a minimum and the surprise and delight at max volume. If you haven’t got a chance to watch it or just want to rewatch it because it’s really awesome, here you go!

Three decades is a long time to be making games. Everyone at Bungie loves getting to create things to entertain our community and we’ve had a blast finally watching everyone jump in and experience 30th Anniversary this week. Thanks for joining us to celebrate with a ton of new items and experiences in the game.
There is cool content to buy with the pack, but everyone is able to participate, with plenty of free content to go around.

Free to all players!

The main attraction for our 30th celebration is the new six-player activity, Dares of Eternity. The mysterious agent of the Nine known as Xûr has shown up to host the festivities and is joined by the strange but lovable Starhorse. There is a tear in the very fabric of reality that only Xûr can perceive. Now you must explore this unknowable space and face untold challenges for Starhorse’s entertainment. Only then can you claim the precious rewards. All of this raises more questions than answers, but even Xûr can’t offer up any explanations of this anomaly.
Speaking of rewards, we have a whole new lineup of free weapons available now! 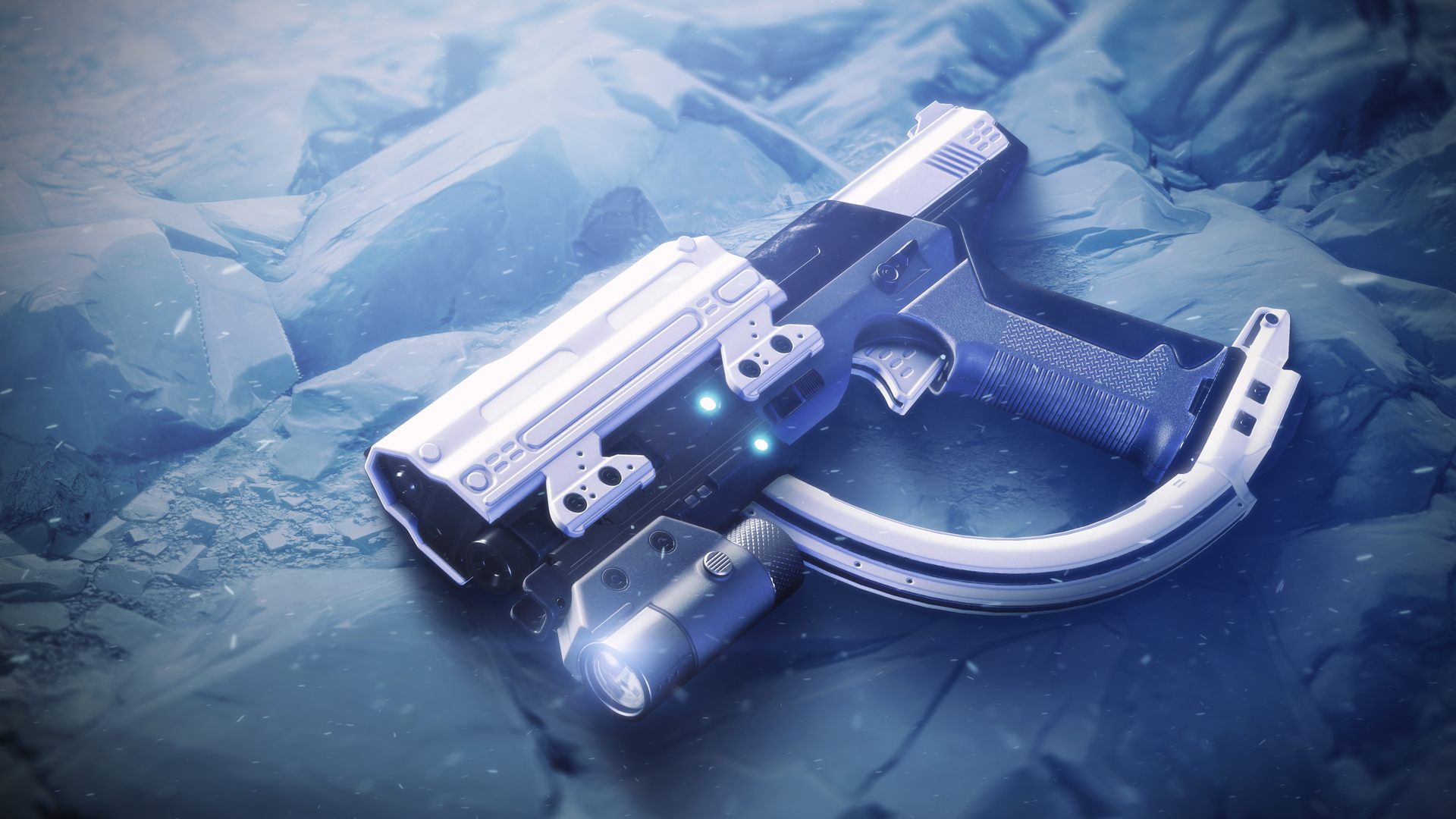 The Forerunner is a brand-new Exotic Sidearm that uses Special ammo and packs a punch. The Full Stop perk gives the Sidearm extended-range and heavy-caliber rounds 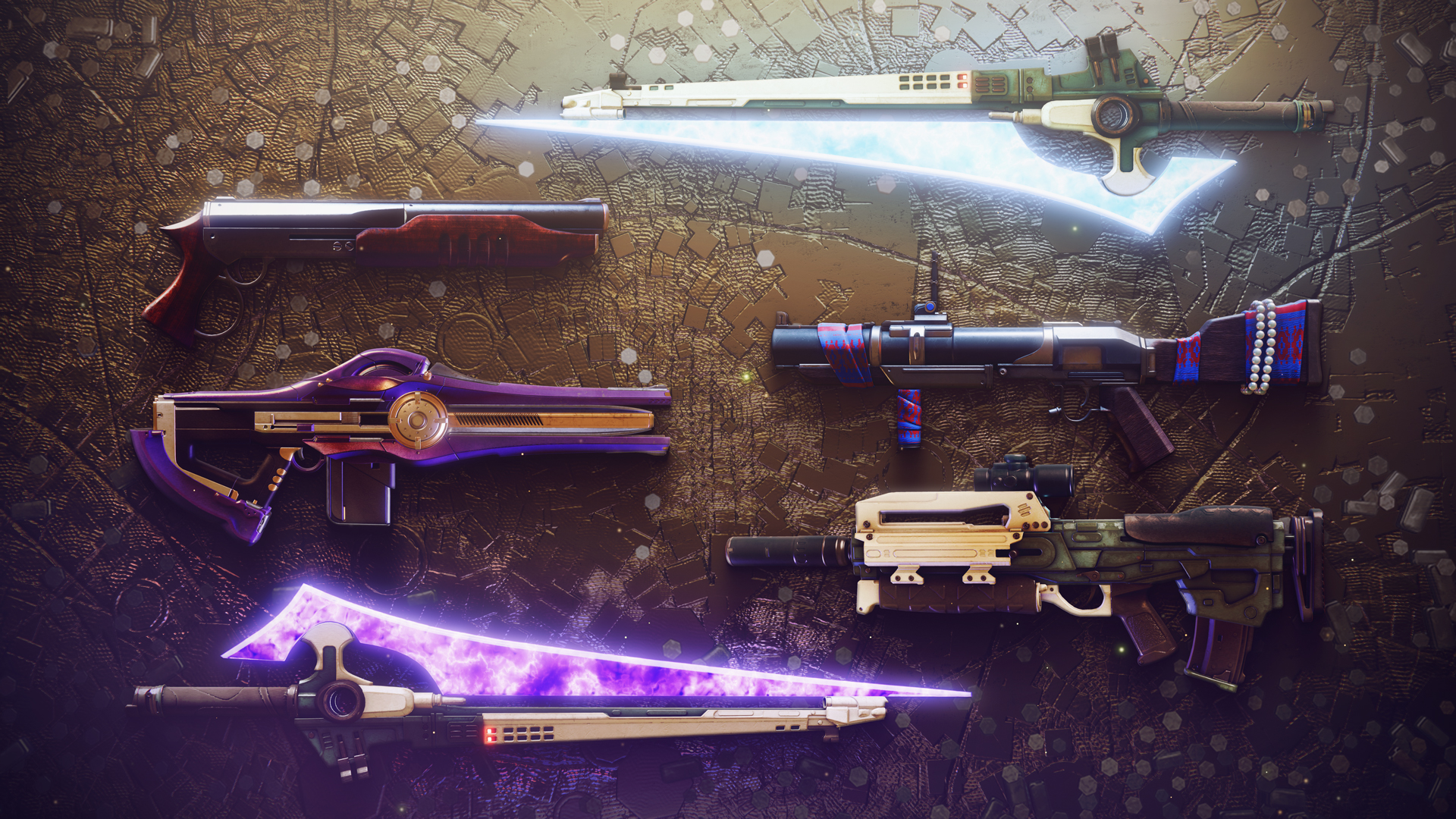 BxR-55 Battler Legendary Pulse Rifle
This new Pulse Rifle is worthy to take into any fray, with a hand-tuned intrinsic perk (Legacy PR-55 Frame) optimized for firing from the hip and an exclusive Legendary perk only available on this weapon (Blunt Execution Rounds), plus a custom and unique scope.
Half-Truths Legendary Sword
This Sword and its mirror image are the only Swords able to roll a brand-new Sword perk: Eager Edge: Gain increased Sword lunge distance immediately after switching to this weapon.
Retraced Path Legendary Trace Rifle
Retraced Path lets players experiment with how random rolled perks might work on a Trace Rifle, and opens the door for other Legendary Trace Rifles somewhere down the line.
Wastelander M5 Legendary Shotgun
The first Legendary Tex Mechanica weapon in Destiny 2, this compact Shotgun will be familiar to the OGs from Bungie’s Marathon era.
Pardon our Dust Legendary Grenade Launcher
Inspired by the unique visual design of Pathways Into Darkness, this is a new Kinetic breech-loaded Grenade Launcher with some unique perk combinations.

Update 3.4.0 launched earlier this week with a ton of changes to the game, from weapons to abilities and practically everything in-between. With more than 6,000 words of patch notes, there were bound to be a few to slip through the cracks. Here are the updates with what we added to the official notes.

Fixed an issue with Kinetic calibration bounties not being available on the Gunsmith.

By now, a bunch of you have gotten your hands on Gjallarhorn as part of the 30th Anniversary celebration. It’s awesome to have this iconic weapon back, and its new perk, which extends Wolfpack Rounds to any Guardian in your fireteam rocking a non-Exotic Rocket Launcher makes this a formidable addition to your arsenal. If you own the 30th Anniversary Pack, just head over to Shaw Han in the Cosmodrome to get the quest started.
Earlier this week, some of the team behind the return of Gjally spoke with the Sony PlayStation Blog on what it was like to bring it back to the world of Destiny. Check out the story and happy hunting!

When we deploy updates, our Player Support Team watches closely for any issues that pop up and are always monitoring closely to report out important information on the state of the game.
This is their report.
Known Issues List  |  Help Forums  |  Bungie Help Twitter

Earlier this week, we disabled the Hunter Mechaneer’s Tricksleeves Exotic arms and the Titan Icefall Mantle Exotic arms due to issues surrounding potential exploits.
For information on when these Exotics will be re-enabled, players are encouraged to keep an eye on the Bungie Help Twitter.

Prior to collecting and opening  Xûr’s Resplendent Reward Package containing the Streetwear Bundles for each class, players should ensure that they have space available in their inventory and Postmaster to receive multiple items.
Players are also encouraged to visit the Postmaster after opening the bundles to ensure all items have been successfully collected. We are investigating a way for players to reacquire these bundles if they end up getting pushed out of the Postmaster.

Players who owned Forsaken prior to 3.4.0. can pick up their Forsaken Ciphers from the Forsaken section of the Monument to Lost Lights Exotic Archive in the Tower. Players should ensure that they have space in their Consumables inventory prior to acquiring their Forsaken Ciphers.
Forsaken Ciphers can also be exchanged for Ascendant Shards at the Monument to Lost Lights if players already own all Forsaken weapons. Please keep in mind that players should only attempt to acquire the Ascendant Shards if they don’t need/want to use their Forsaken Ciphers.
Play for free without PlayStation®Plus
Starting today players will be able to play all multiplayer content in Destiny 2 without being a PS Plus member. This trial will run from now until December 20, 2021 and is the perfect time to try out all exciting multiplayer content Destiny 2 has to offer.

Sam: Watching these pieces of video magic just hit different with new content, doesn’t it? Between the Loot Cave and Gjallarhorn, I just can’t get enough of the Destiny 1 throw backs!
But alright, let’s quit foaling around and go show these Guardians some love!
*Starhorse neighs approvingly at the terrible pun*
Movie of the Week: “Loot Cave Dungeon – Trailer 2”

Movie of the Week: “Gjallarhorn VS All Raid Bosses”

266 days of tweeting in total. 38 weeks exactly since the original tweet...

Part of the journey is the end, this is mine. Thank you for joining me on it.

Don’t forget to make sure your Bungie profiles are linked on your videos and make sure you are using the hashtags #Destiny2 and #MOTW!

Hippy: OK, first off, who gave our community the right – neigh, the audacity – to be so dang talented?! Seriously, it’s so hard to just pick a few art pieces, you all never cease to amaze us! With the launch of the 30th Anniversary event (infinite neigh), there have been so many awesome creations from the Destiny 2 community, so we just had to pick at least one tribute to the glorious Starhorse. But life is also not all fun and games, so we figured why not tug at those feels some more with a stunning tribute to our fallen friend: Cayde-6. Fun fact, this artist’s Cayde tribute also glows!
Prepare for laughs and prepare for tears, here are our picks for Art of the Week!
Art of the Week: A Smoothie

Art of the Week: A Tribute

I’ve been consumed with painting Cayde-6 for a couple of weeks, and today feels perfect for the big reveal. Happy 30th, @bungie. To say that my life wouldn’t be the same without you is an understatement. Thank you.#Destiny2Art #Destiny @DestinyTheGame
(And yes… he glows💙) pic.twitter.com/dAmxmHqQxe

Launch weeks are a lot of fun. Glad to see everyone enjoying the latest content! Later tonight, you should tune into The Game Awards. We will have a little something to show off, it’s not a huge announcement but worth tuning in if you can.
Preshow starts at 4:30 PM Pacific on Twitch and YouTube. If you already have dungeon plans, don’t worry we will post it on our channels for you.
It’s been an exciting week but we still have more to come. The Dawning will go live next week so get ready to welcome our favorite space grandma back to the Tower for more tasty treats. Tower weather services are reporting that snow is in the forecast.
<3 Cozmo