Sep 9, 2021 - Bungie
“Unfortunately, it looks like we’ve got a man down…” Joe Staten chuckles on stage during E3 2013. Jason Jones, Bungie’s founder, sounds more nervous. Unknown to him — to all of us really — a technician below the stage inadvertently severed the connection to Jason’s monitor. He stared at the crisp text on the display that simply read “No Signal.” What our team did know, however, was that “man down” meant something had gone south with this demo. The crowd watched as Jason’s character waved and walked forward a little. Moments later, the feed the crowd was watching switched over to a pre-recorded video and the show carried on.
Destiny’s reveal to the world was an auspicious debut. And while over the last seven years the ride hasn’t always been smooth (for you or us), it has been memorable, and we endeavor to keep it that way.
This is Destiny’s seventh anniversary.
You might be wondering why we are celebrating the seventh-year milestone of a video game when you usually hear about 10, 25, etc. Well, at Bungie, the number seven has special meaning.
Revealing Destiny’s gameplay at E3 in June of 2013 was a monumental event. After putting years of work into this new game, we were about to finally show the world what we had been making. The team rehearsed constantly and prepared for every scenario. They had run through it several times successfully with no technical or performance errors. But as mentioned above, everyone has a plan until you get hit.
Somehow, without a functioning monitor, Jason manages to get his Guardian to wave and walk over to Joe’s Guardian — just in time for the heroes behind the scenes to cut to the backup video.
Disaster was adverted, but now they still need to sync up their live performance with the backup video. No easy task. The numerous rehearsals and preparation pay off as everyone times their lines perfectly, even though they are no longer at the controls. No one in the crowd seemed to notice everything going on in the background to keep the show moving, and some even saw the long pause while the switch to backup happened as nothing more than a long loading screen for an early build of the game.
The debut was a success. It showed that, although everything might not always work out perfectly to plan - hard work, preparation, and a stubbornness to succeed would drive this franchise forward.
We wanted to use this occasion to look back at the humble beginnings of Project Tiger and some of the material created to inspire and direct its development.
It started with a small group creating beautiful concept art of environments, characters, and classes. Seeing which ideas would stick and what might be left on the cutting room floor. Eventually the allure of the sci-fi called out and the art reflected the themes you still associate with Destiny today. A sci-fi shooter grounded in our solar system, but still a fantastic universe of magic and mystery. A world built around hope and an eternal struggle of light and dark. 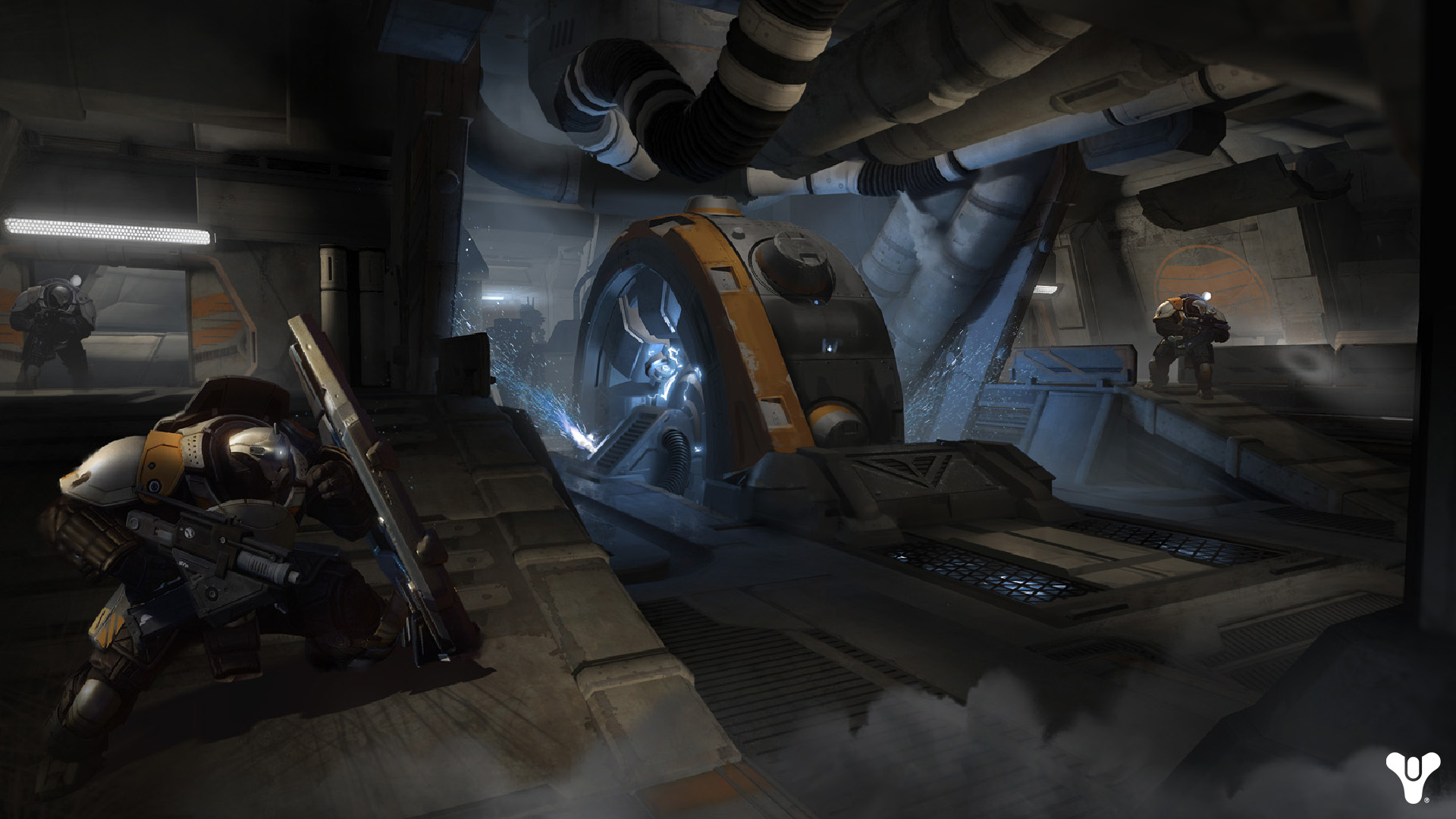 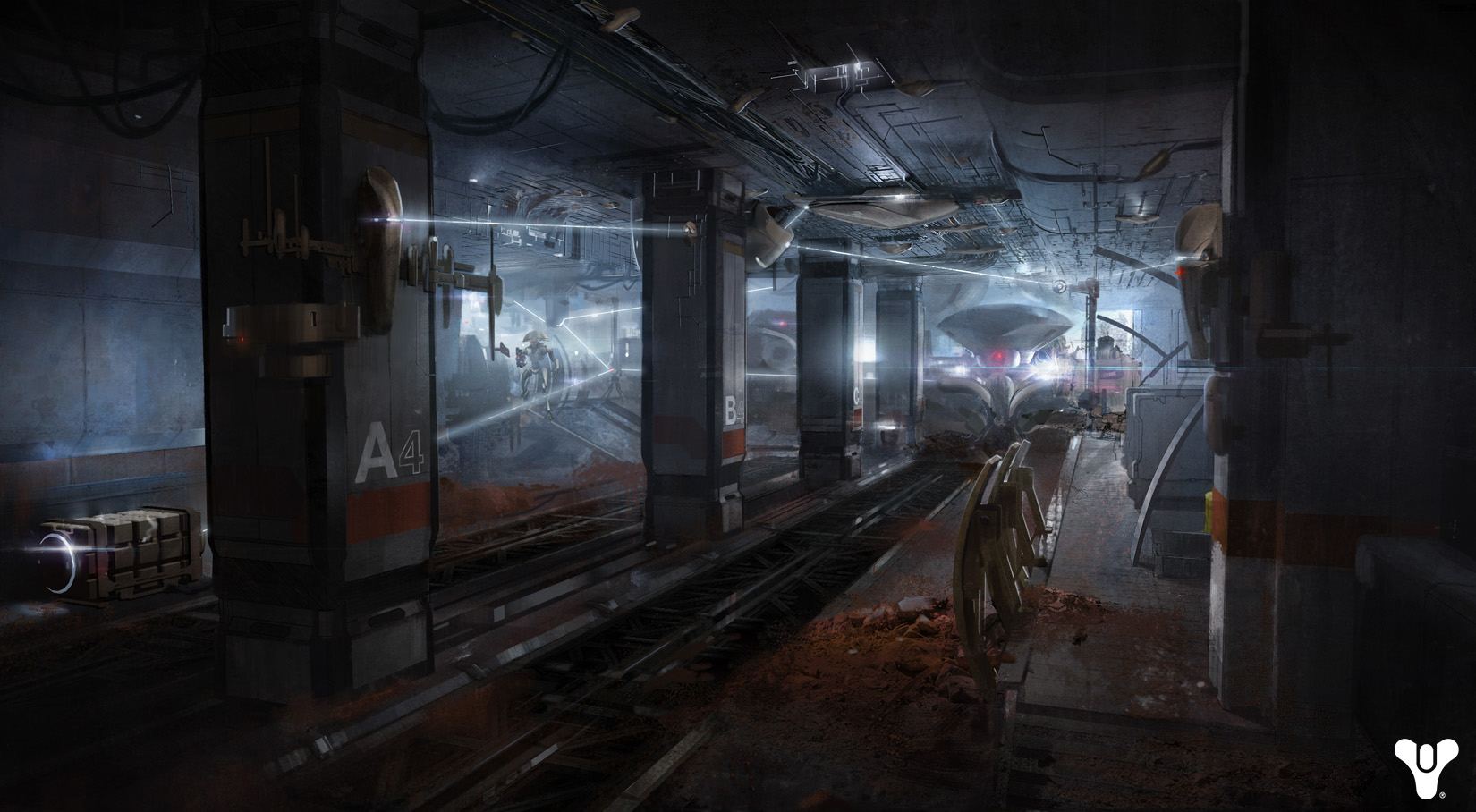 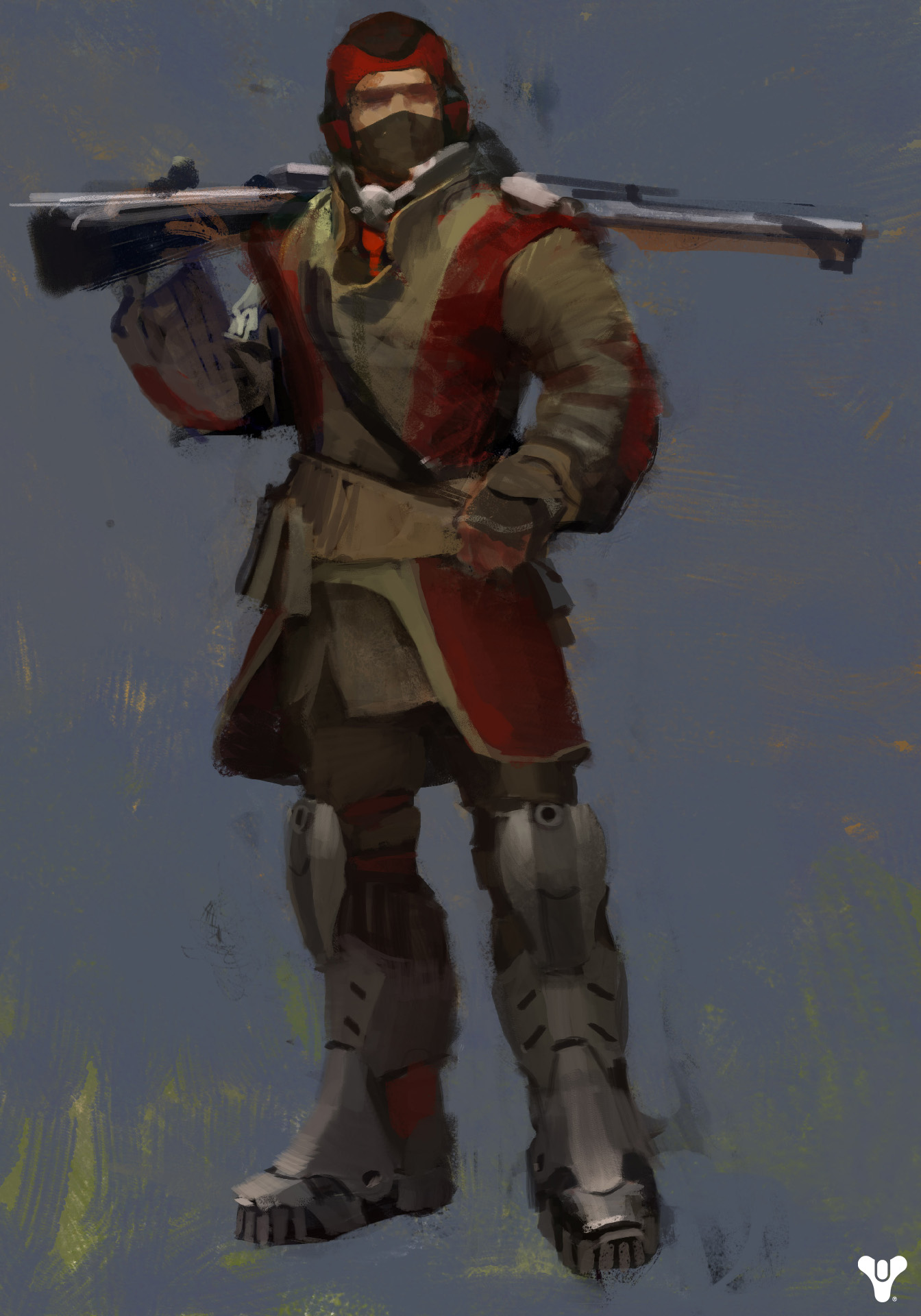 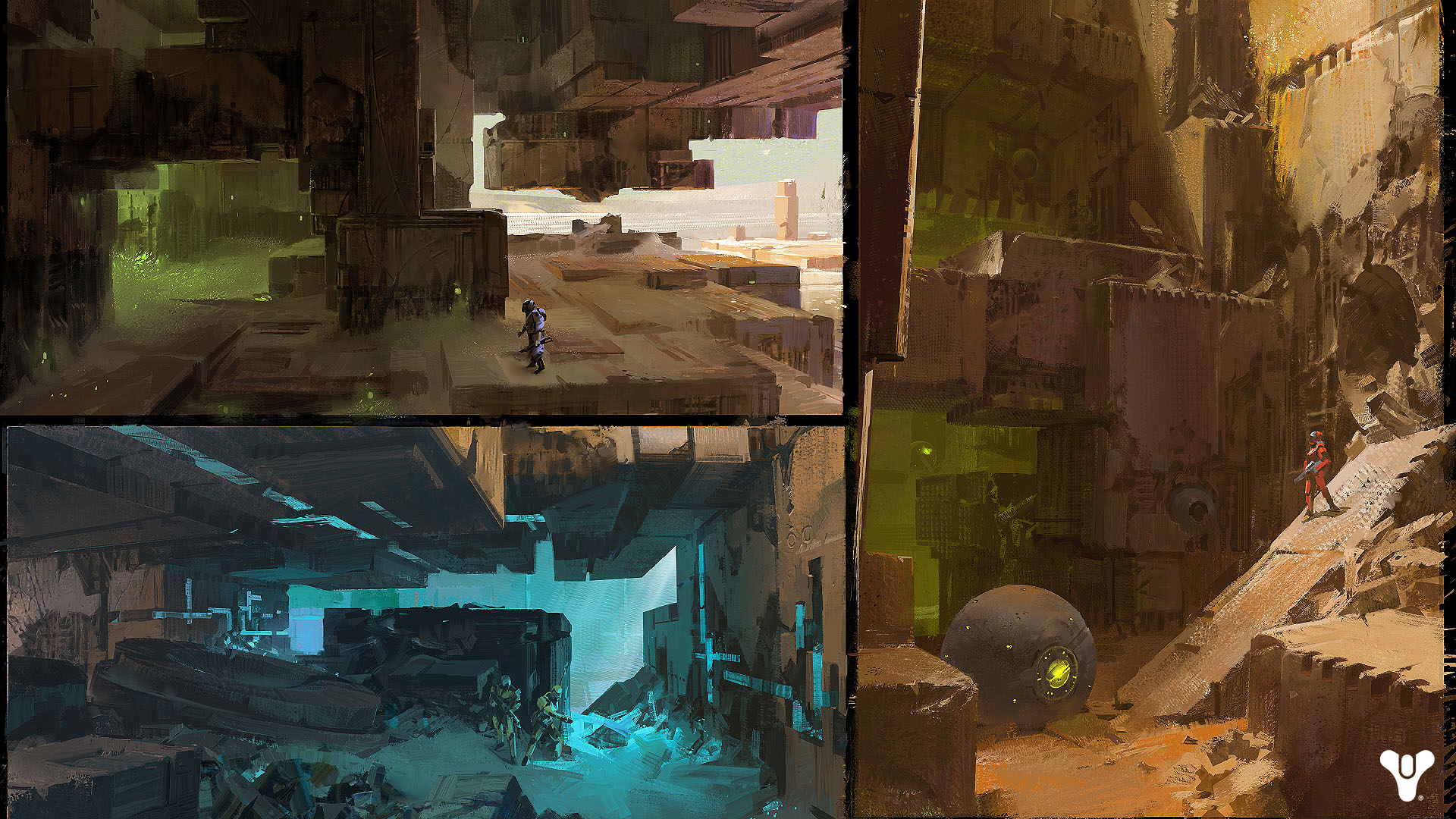 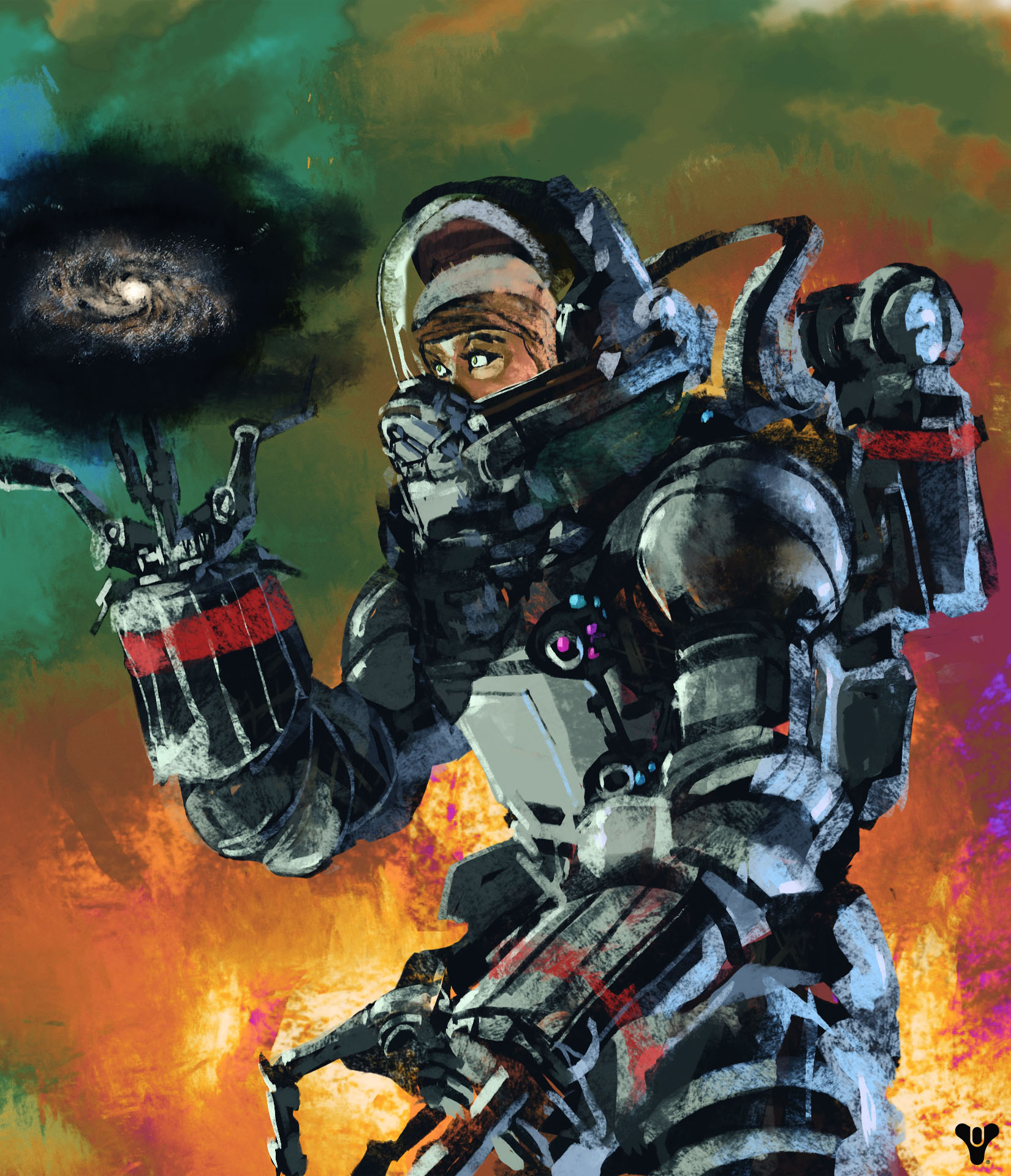 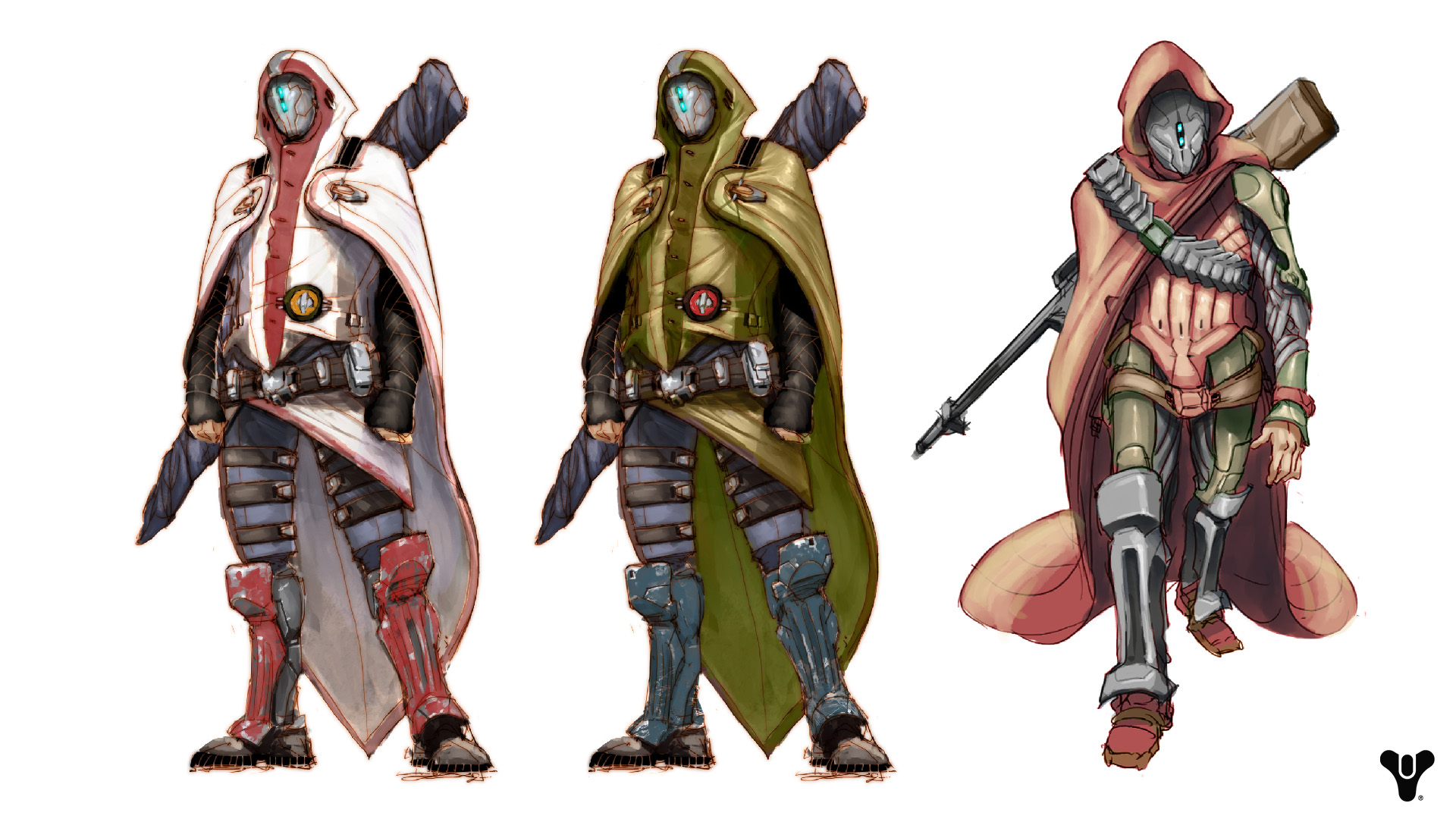 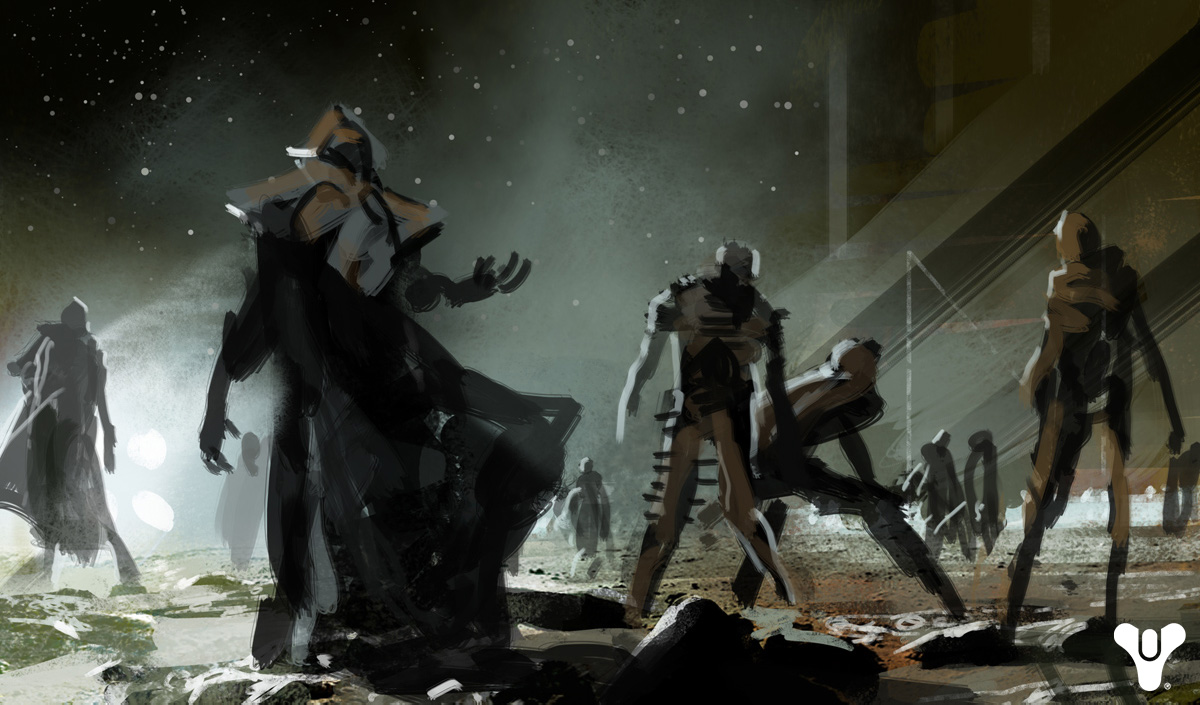 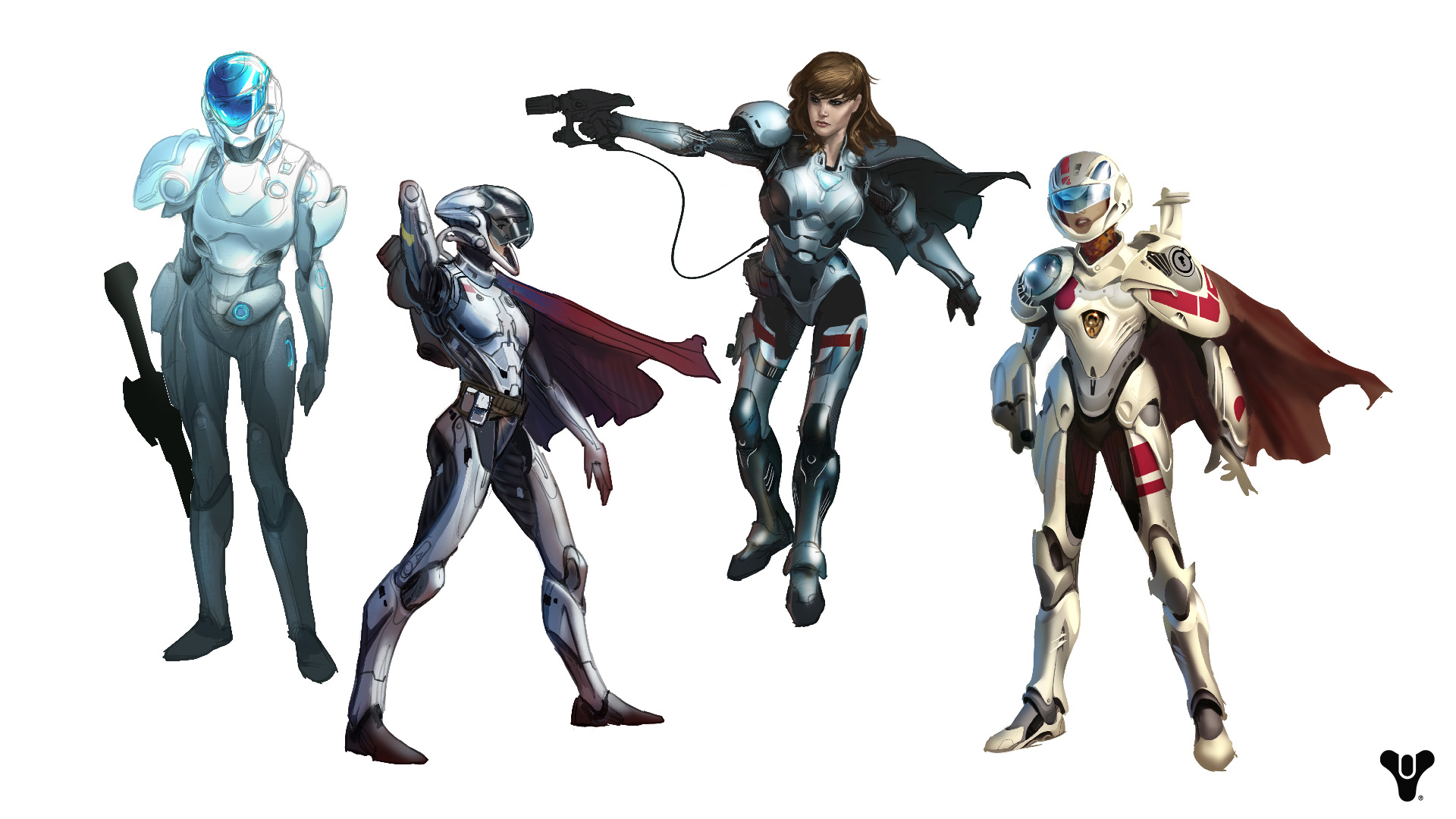 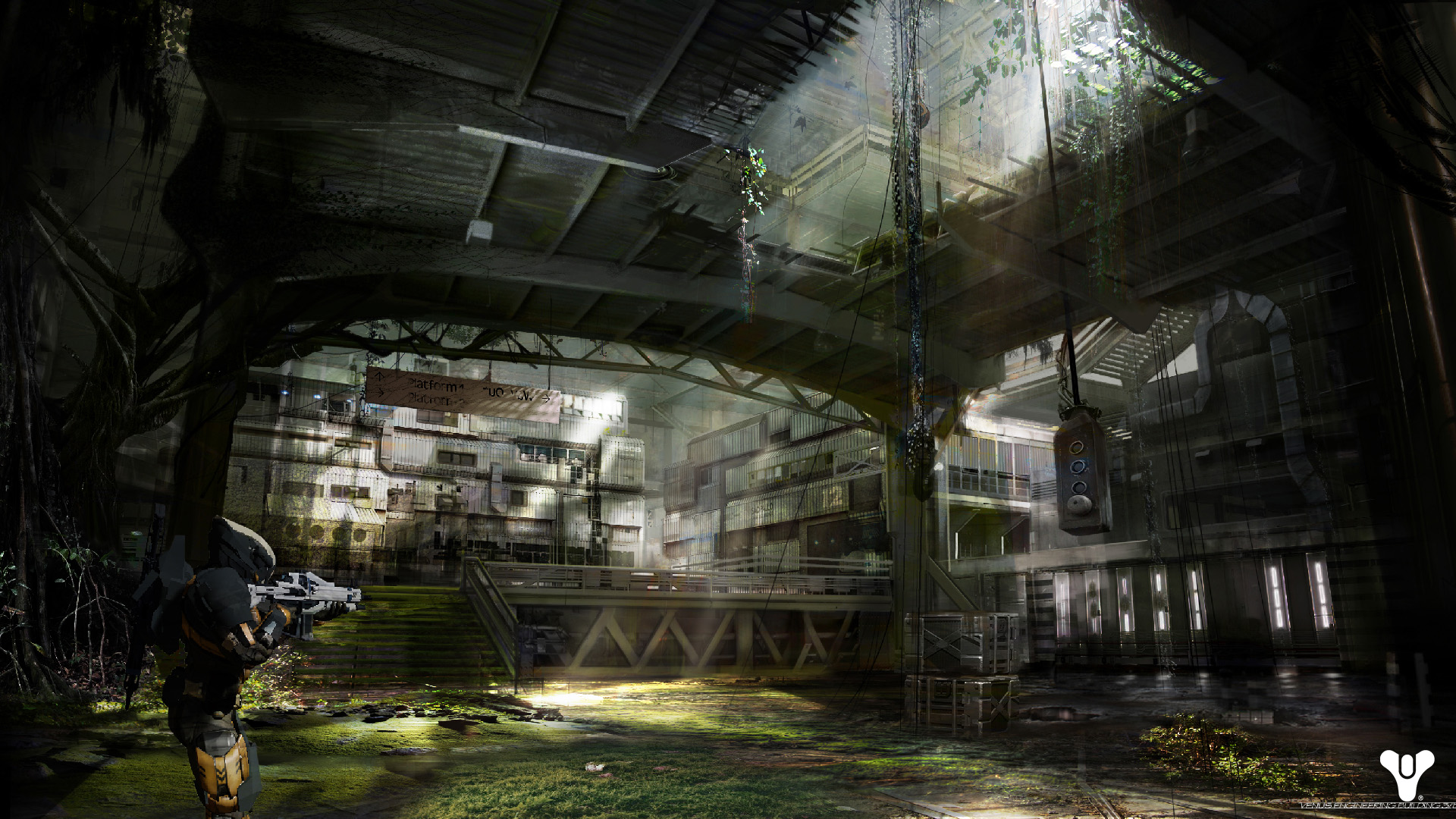 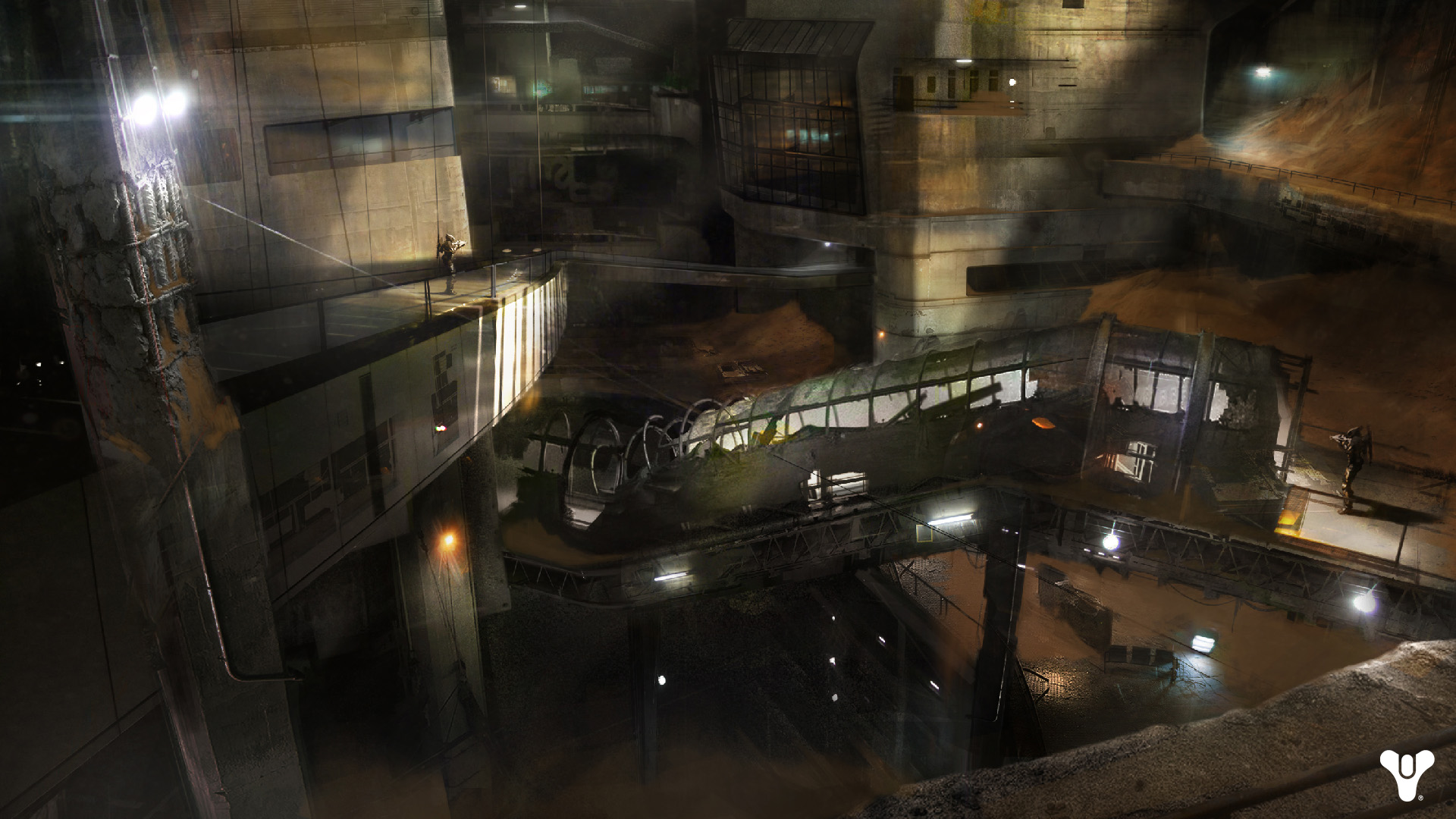 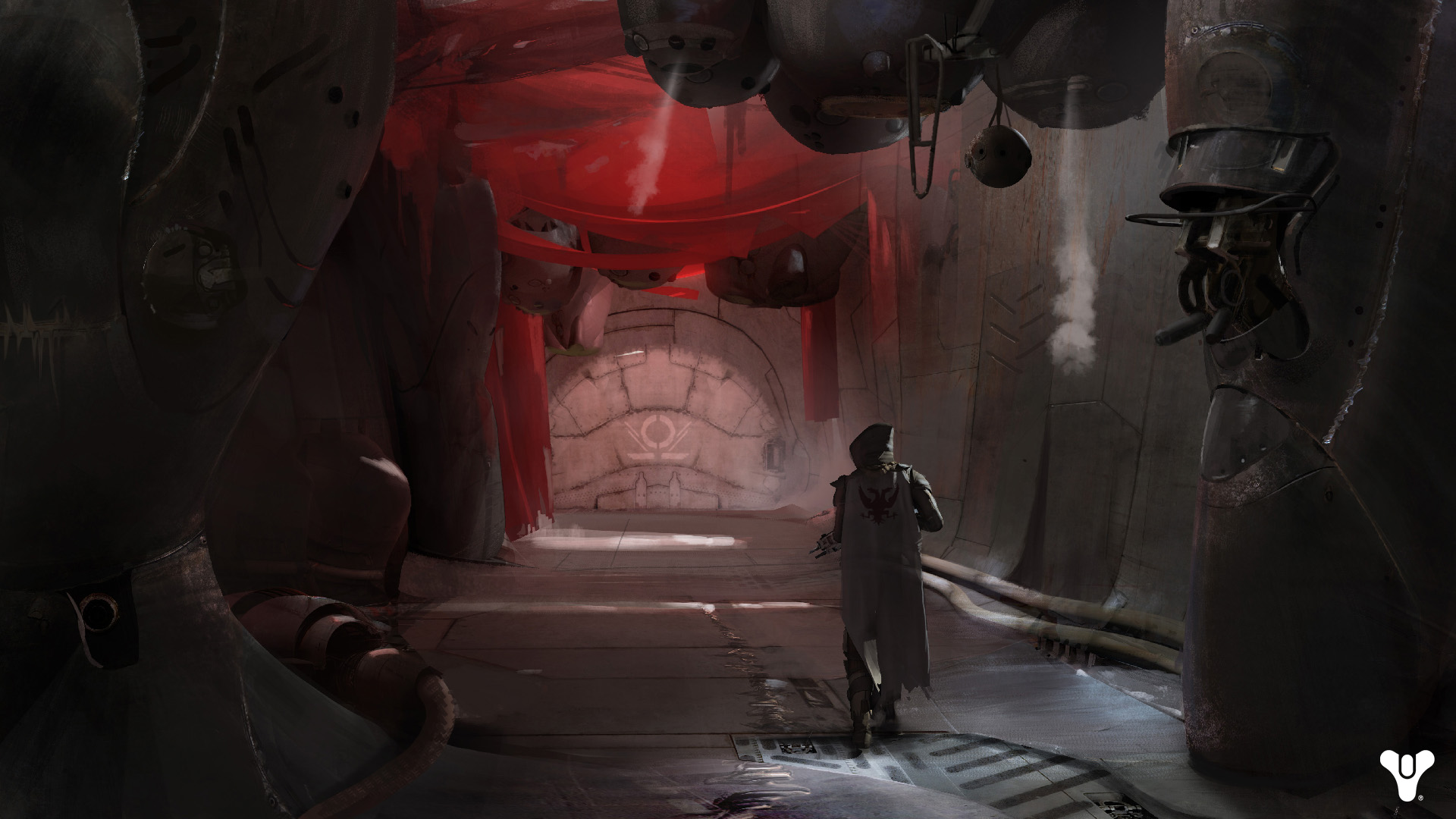 Ryan Demita
Concept art is great at showing how a future experience may look when fully fleshed out. But sometimes thematic text is written to describe more backstory and context around fledgling ideas. When showing early work, presenters will often read scripts along with the art to give a fuller glimpse of how these plans can blossom into immersive worlds. Here are a few examples by Christopher Barrett of early ideas and what they eventually become over time.

January 29, 2014
Silent space. A dead moon sits cleaved in the starred sky like some accident of the gods. Regolith and rock suspended.
Above. A perfect circle gouged into the surface, ringed with dense inscrutable geometry. Dust slowly pours over the edge of a gaping maw like a slow and giant hourglass.
Descent. Dust turns to mist, mist turns to thick, unnatural fog. An endless chasm bored to the very heart of the moon.
Darkness. A flicker of light. Shadows dance across shifting slab. Six runes ignite, tracing the ground like some kind of cosmic gasoline. Cröta stands between. The Relic held. An ancient and evil sound erupts from even farther below. The ground begins to open. A tomb.
Upwards. A Dozen eyes shimmer in the black.
Upwards. Hundreds more.
Thousands.
THE DARK BELOW

The House of Wolves

November 21, 2013
Silver stitch on dark, grayish blue. Tattered cloth waves in the cold winds, slowly filling the frame to reveal the sigil of the House of Wolves. Fiercest of all the houses, but lost, fallen, and scattered to the stars like the rest.
Woven fiber from above. Old and worn but intricate and trimmed with gold. Shimmering dust catches the eye as the camera moves slowly forward. By dark cerulean blood and broken glass, a grizzly scene is revealed. Past the curled fingers and over the chest of an Awoken Queensguard. More bodies lay, victims of a violent struggle, some punctuated by spear.
The cloak turns with its wearer, revealing matted fur coated with frost. The Fallen Captain turns. Drifts of snow and dead grass now revealed. It continues on, assured for the moment their path lies masked. Others of the pack stalk ahead, distant. A Servitor keeps pace, dark ancient metal seemingly weightless, drifting forward. Wind. Snow.
The Queen stands still, only her hair slowly shifting. A shattered window frames her, before the dark swirling clouds of The Reef.
Mutiny.
THE HOUSE OF WOLVES

November 21, 2013
Saturn
The deep black. The uncharted tides beyond the Reef. A shimmering sea of ice tumbles endlessly around the once Roman god Saturn. Penetrating the silence a monolith of iron and bone roars. The sharp bow of the millennia old Exarch dreadnaught breaches the surface like a whale, thousands of jeweled crystals shattering.
The shadow of the god king Oryx. His tattered glove reveals rot and bone of countless heirs before. His fist clenches and dust falls.
The three Princes kneel before their maker.
Emerald lines burn within deep gouges as alien symbols impossibly appear like the carvings of a mad monk on stone fast forwarded over a fraction of time.
Oryx's shadowed cowl tilts. The twisted horns writhe with life as his swimming green eyes are revealed.
A crescendo of sound.
Black.
Book III
THE DEAD KING

A lot has happened between then and now. We launched a sequel, gained our independence, and most recently revealed the next big thing.
The Witch Queen is coming on 2/22/22.

Thank you for taking a stroll down memory lane with us. Seven years is a long time, but Destiny is nowhere near being done. Happy birthday Destiny. Your future is bright.
Oh, and that HDMI cable that broke? Jones still has it. A keepsake, a totem, meant to ward off anyone who dares ask him to do a live stage demo ever again.