Sep 23, 2020 - Destiny Dev Team
On the frozen moon of Europa, Eramis, the Fallen Kell exploits a dark power to grow her army’s strength. The Vanguard’s attention is demanded.
The allure of this ancient power clouds your focus and tempts you with Darkness. Stasis whispers in your ear before you even arrive. You touch down in the snow-covered clearing; the distress signal from Variks still lingering in your ears.
The crunch of your boots in the snow makes you aware of the silence. A silence that is short-lived. It starts as a light gust, carrying away the gentle flakes of snow that rest on your shoulders. Then, without warning, it hits you. A sudden wave of frozen air cuts through your armor. The hut in the distance seems farther away – harder to see. You lean into the wind as it grows in strength and can’t help but wonder, “Why didn’t I park closer?”
Frost begins to spread across your helm and the storm howls as Europa challenges your every step. The squall envelops you and your destination vanishes into the white. But still you press on, bolstered by the steadfast guidance of the Light.

The developers at Bungie responsible for the immersive experience on Europa have been wanting to take a crack at a new type of weather system for quite some time. The desolate, icy, and hostile surface of Jupiter’s moon offered them the perfect environment for a snowstorm.
Europa Design Lead Alex Velicky recalls, “We were brainstorming and Ed Brennan [Europa World Art Lead] proposed the idea of a blizzard to help sell the fantasy of a harsh environment. I thought it would be awesome if design had direct control over it and it didn’t take long for everyone to get excited about the implementation.” And so, the task of making a brutal Bungie blizzard began.
The team tested features like slowing player movement, altering grenade paths, and even knocking players off their Sparrows. “It was painfully unfun and made doing anything in the game almost impossible,” said Velicky. VFX Lead Justin Hayward added, “We iterated a lot to find a delicate balance between it seeming dangerous but without it actually being disorienting, oppressive, or negatively impacting core gameplay.”
Making Europa feel like a treacherous frontier was the main goal behind this new system, so they kept digging until they struck the right balance. When they found it, they moved onto believably integrating it so that it felt like part of a living breathing world.
“Most weather in Destiny is fairly simple,” said Velicky. “Because of this, most of the relevant systems are things our Skies, VFX, and Lighting teams set up and then leave to run consistently.” The team wanted to play with that consistency and be able to control the weather to create some intense and dynamic moments.
The answer lied in scripting the weather in a way that was similar to the systems found in Destiny’s activities. “After a lot of investigation from some clever folks, we managed to do it,” Velicky said. “The resulting system is script-controlled and fully networked.”
And just like that, storms on demand.

Dynamic weather was a huge step for the Destiny team, but it was just the first. Knowing that real storms don’t suddenly appear and disappear with the exact same features every time, the team looked at different ways they could immerse players into oncoming and departing storms.
“We watched a lot of reference from nature documentaries, movies, and games,” said Mark Goldsworthy, a creative lead on the Skies and Lighting Team. “Then we created our own spin on it as we imagined how this would look and feel on a moon of Jupiter in Destiny.”
They settled on a handful of variables that, when blended, could organically grow or diminish a storm based on the needs of the story. As a result, weather on Europa comes in three basic flavors:
The first has no storm at all. This is what Europa would look like without the new weather system. Clear skies, fresh snow, perfect skiing weather – consider this the smoothest sailing you’ll do on the icy moon. 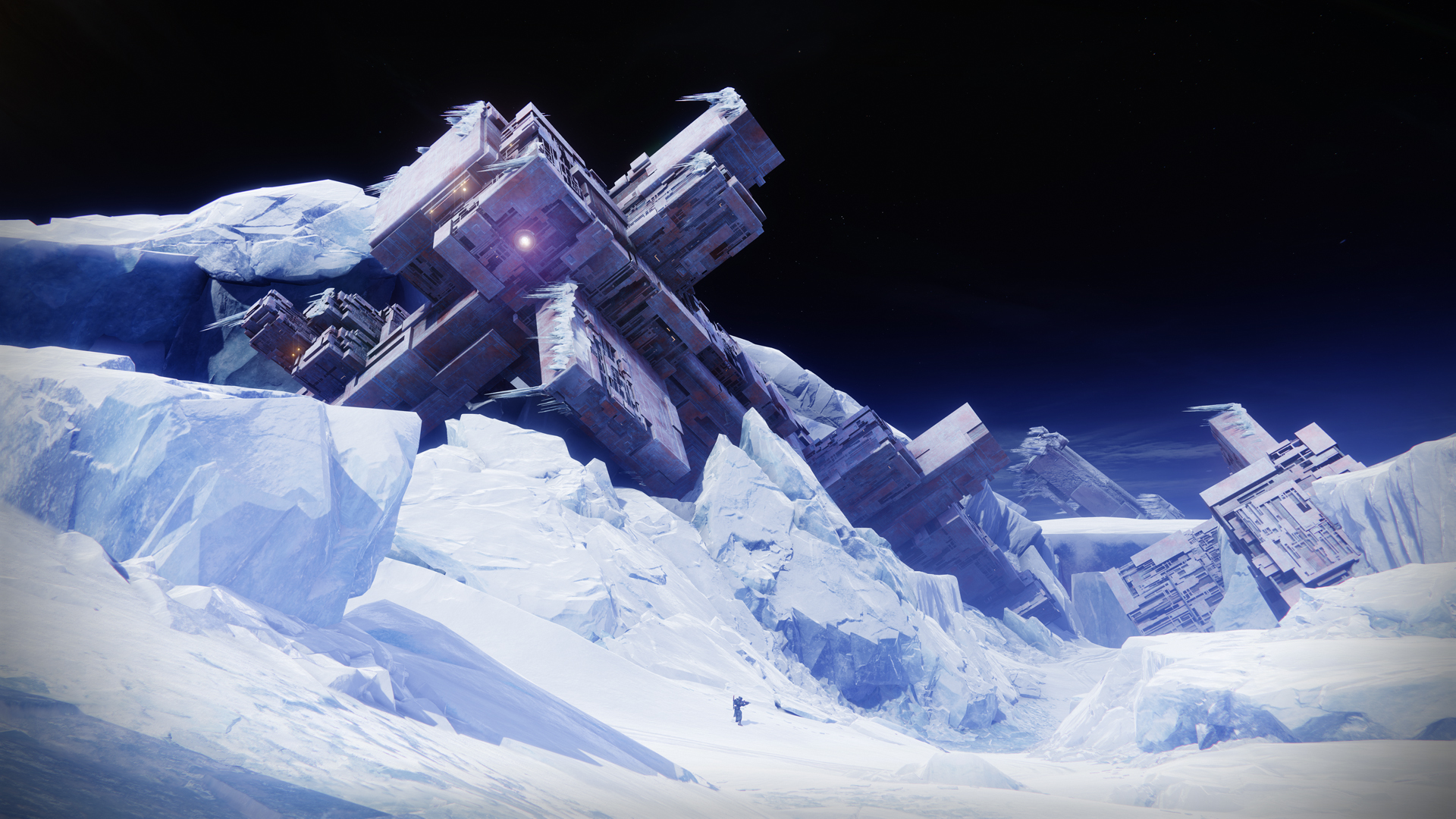 During a light storm, the wind picks up, snowfall increases around you, and is largely aesthetic. “The light storm blots out the sun and completely obscures the starry skies above you,” said Velicky. “This alone dramatically changes the feel of the destination.” 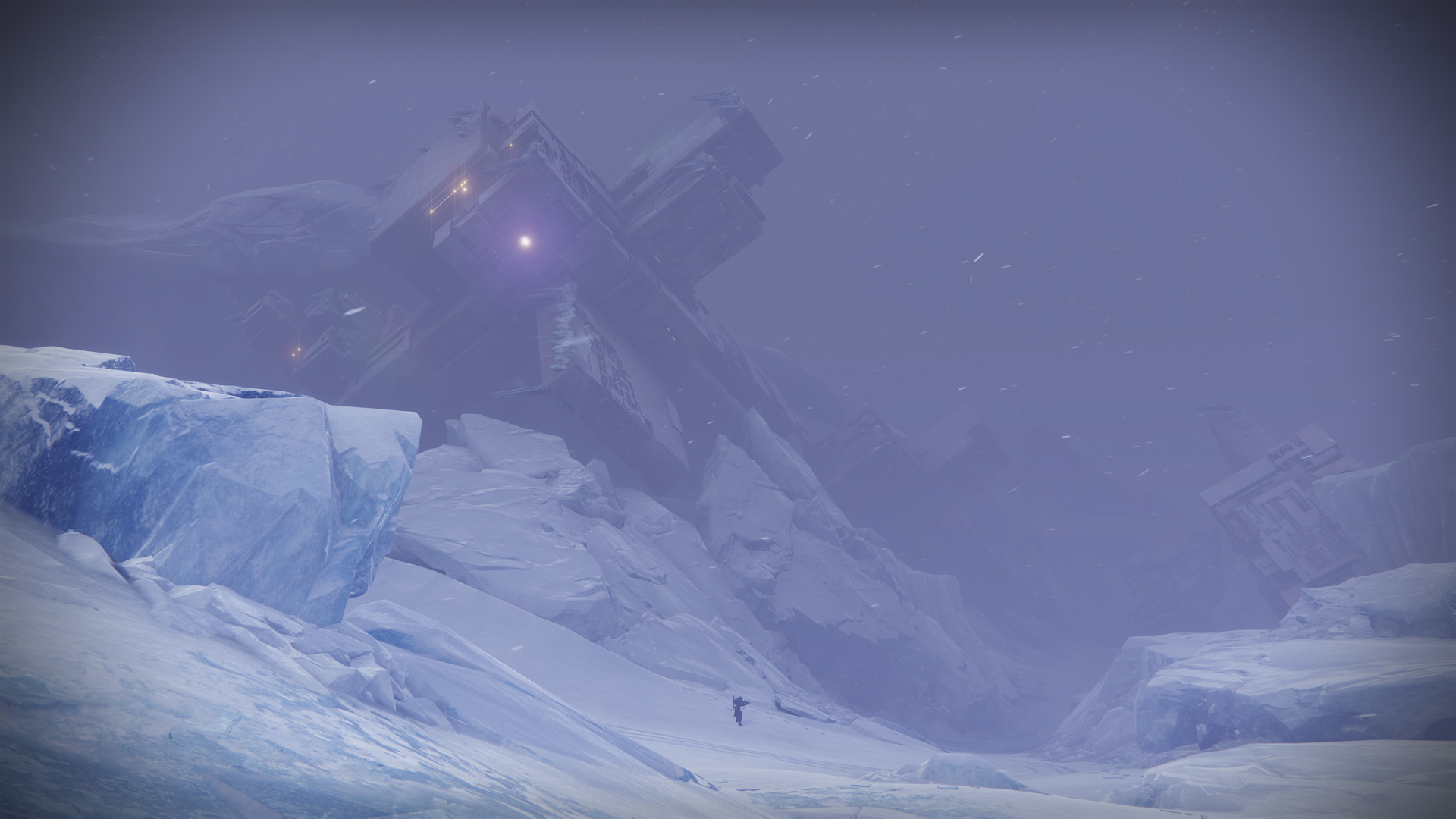 “When the heavy storm hits, the sky is heavily obscured,” Velicky said. “The wind roars and the snow flurries become even more violent. The mid-ground is difficult to see and, if not for the faintly visible silhouettes, it would be nearly impossible to navigate at all. Players are encouraged to stick closer to cover and move with intent.” 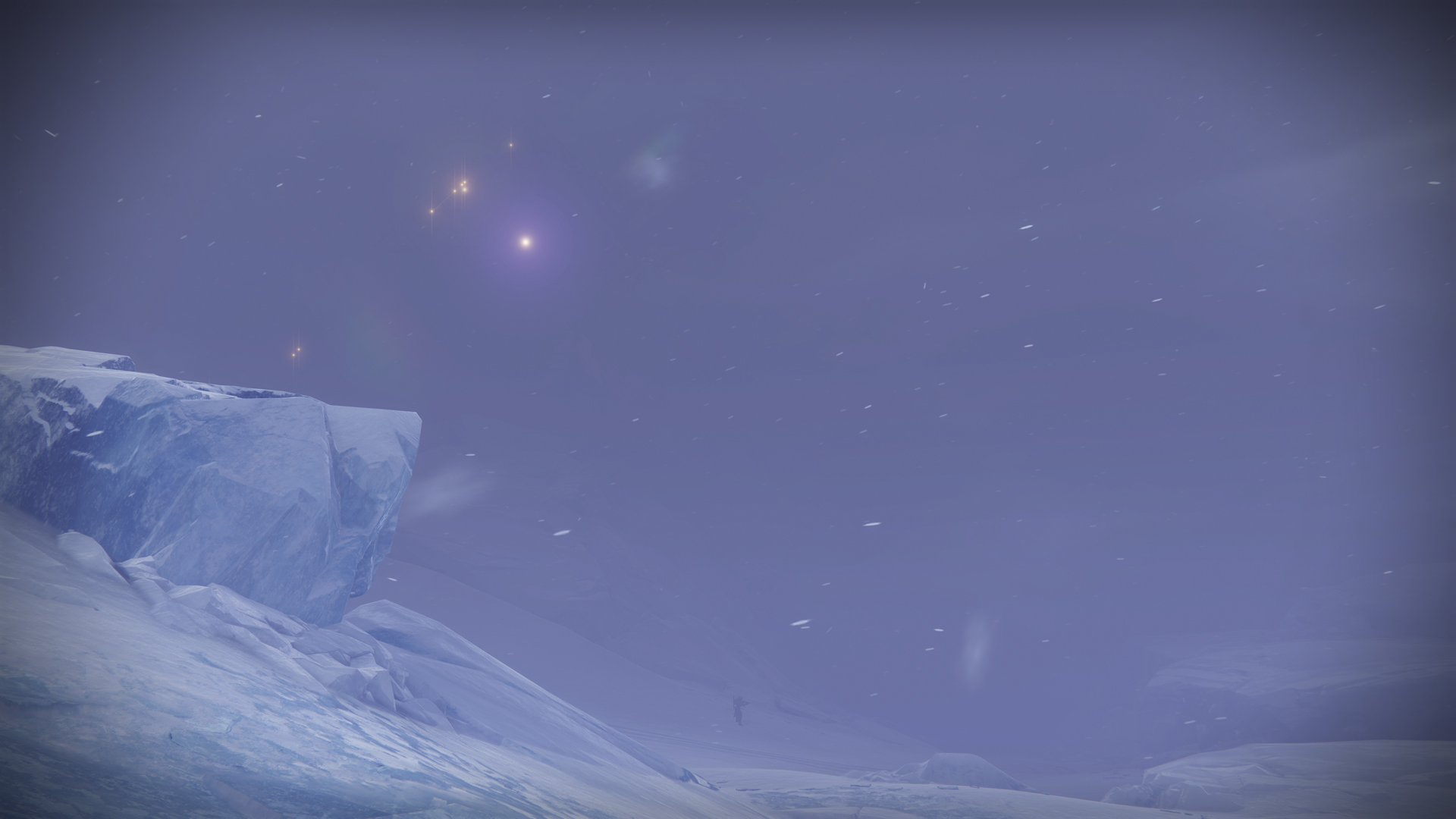 It’s also worth remembering that just because the weather picks up, doesn’t mean the moon’s combatants disappear. Even though it looks like the snow is shooting at you, it’s not. So, with nearly zero visibility and a Fallen Kell to stop, it might not hurt to pack a thermal scope.

The Sound of the Squall

The gusts of wind rushing past your ears, the creaking of structures as they bend and sway, even the silence. In many cases, you hear a storm before you see it. The Audio Team wanted to give Europa an identity and a voice, so they introduced a unique palette of sounds that would establish it as a recognizable and real place in the Destiny universe.

Sound Designer Keith Sjoquist went searching for sounds that would evoke an alien wasteland that is familiar, but subtly unusual – alien and otherworldly. “Early on, [Sound Designer] Peter Comley, shared a video of seal sounds in Antarctica that he had been drawing inspiration from that really resonated with me,” said Sjoquist. “They were characterized by descending tones, clicks, and booms. It was striking how closely tied to the icy environment and naturally evocative of cold and hardness they felt.”

Sjoquist used this video as an inspirational cornerstone and he began soliciting sounds from other team members and recording some of his own material to feed through a custom FX processing chain.
To implement the new sound design, they piped information from Destiny’s new weather system into their audio software. “We used the game data to alter the pitch, the volume, and the triggering frequency of the sounds,” Sjoquist explained. Data connected to things like the storm intensity could then be used to alter the soundscapes in real time.

There were also wind loops and structural sounds added to locations in the world that were all tied to the same game inputs. These audio cues would remain silent when the storm was inactive but would slowly come to life as the weather picked up. “All of these things working together really made the Europa storm feel dynamic and unique,” said Sjoquist.
Click to listen to the frozen frontier of Europa as designed by the Destiny Audio Team.

Bundle up, Guardians. November is right around the corner and it’s getting cold outside.