Putting the Epic in Epicurean: Inside the Official Destiny Cookbook

Jul 22, 2020 - DeeJ
Have you ever wondered what Dark Motes taste like? How about Vanilla Blades? What might a meal inspired by Izanagi’s Burden be like? Or cookies based on Gjallarhorn? Would they be sweet? Bitter? Perhaps even… exotic?

The recent release of the Destiny: The Official Cookbook is Bungie’s attempt at answering these kinds of pressing questions. Whether you’re a budding gourmet or someone whose idea of a meal is putting in an order with your delivery service of choice, there’s something here for every level of culinary skill. The book, which was released this week and is available on the Bungie Store now, features dozens of recipes inspired by the worlds, characters and, yes, sometimes, even the weapons of Destiny 2. From Radiolarian Pudding to Infinite Forest Cake; Traveler Donut Holes to spicy ramen (naturally!), there’s lots of culinary treats to prepare and enjoy, and no shortage of goodies for Destiny lore connoisseurs along the way. 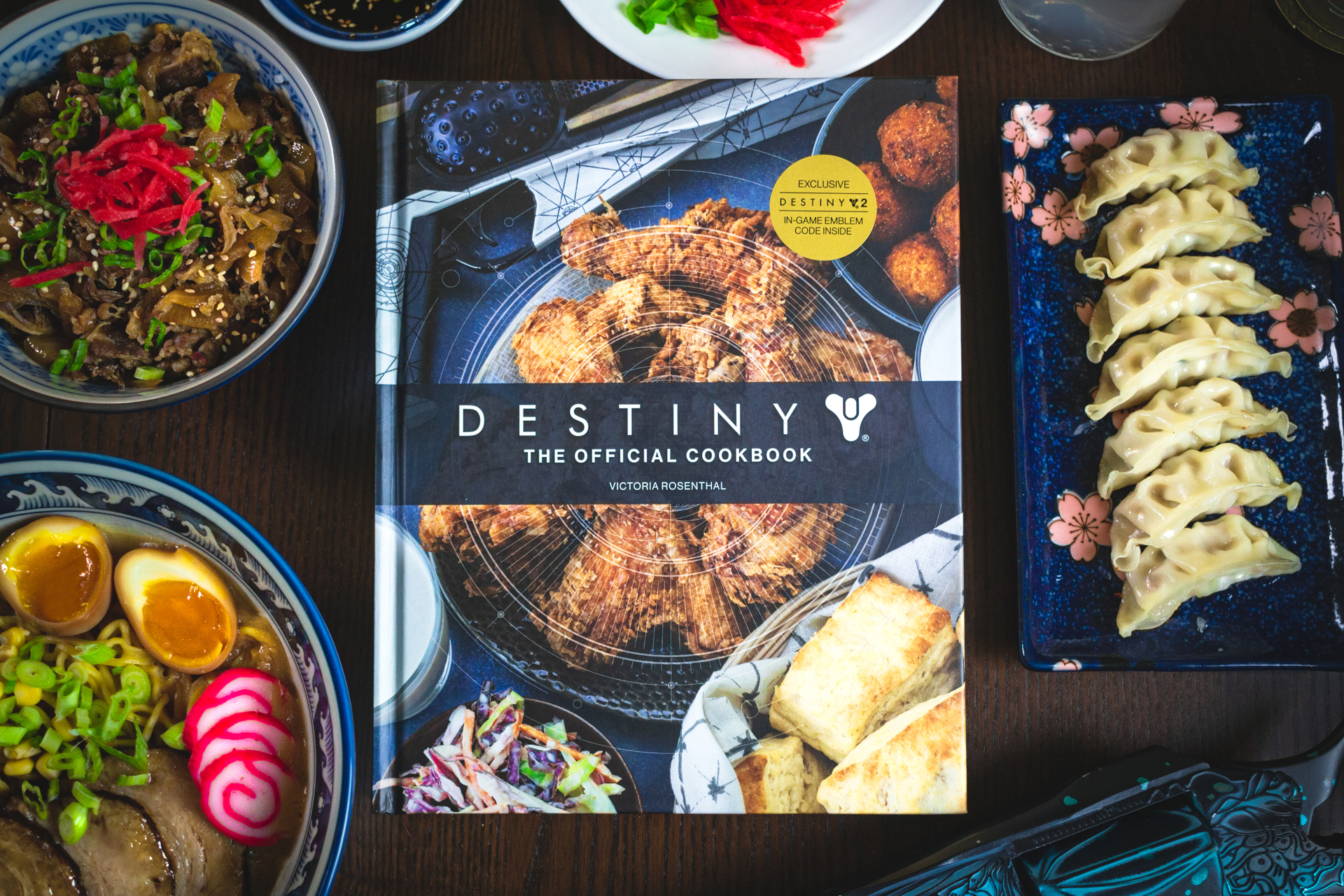 Recently we spoke with some of the people who have been instrumental in bringing the Official Cookbook to life, discussing what it’s been like combining the worlds of epic sci-fi action and epicurean delight.

“There’s nothing more wholesome than preparing a meal,” said Bungie’s Lorraine McLees, art lead in Consumer Products. “It’s something we can all relate to.”

Lorraine has been with Bungie for more than 20 years and her list of artistic contributions to the worlds of Bungie is formidable. (The Halo logo? Yeah, that’s her work). Considering her long history with the company, Lorraine remembers the days when members of the Bungie team would spend holidays together instead of traveling to visit family. “We used to host Thanksgiving. We had big gatherings; there were probably like 60 of us.”

Those makeshift family holiday dinners were the origins of the Destiny cookbook concept, she said. “We collected a whole bunch of recipes from everybody. I gave them [recipes] that I cooked for folks, even bringing it to the office and cooking.”

Though that original concept of a home-sourced version of a Destiny cookbook never really took off, the inspiration stuck around. At one point the team considered sharing a small collection of Festival of the Lost-related recipes but that project eventually fizzled too. It was only relatively recently that the idea of a traditional Destiny cookbook took its first steps towards publication, thanks in no small part to the plethora of appearances that food and drink make in Destiny 2 lore.

Lorraine remembers seeing a similar gaming-related cookbook (the World of Warcraft cookbook) and immediately seeing the possibilities in the Destiny universe. After all, you don’t need to dive too deep into the lore to see references to food and drink. “We have spicy ramen; we talk about a bunch of different foods,” Lorraine said. “Devrim Kay talks about making tea. There’s something about making food and how it makes [the world of Destiny] into something you can relate to.”

So with full confidence that the world of Destiny held plenty of possibilities for fueling a full-fledged collection of recipes, it was perfect timing when one of Bungie’s longtime officially licensed partners, Insight Editions, came up with a pitch for an actual cookbook. Even better, they already had the right person on board to make the dream of a Destiny cookbook a reality.

Victoria Rosenthal isn’t just a fan of videogames, she’s an author and amateur chef who loves to showcase her various cooking skills and gaming-inspired recipes on her website and Twitch channel. As the author of the Fallout: The Vault Dweller’s Official Cookbook, Victoria has mastered the art of marrying delicious-yet-approachable recipes with content that is built from the rich narratives of games, making her an obvious choice to take up the mantle for hungry Guardians everywhere.

Though her cooking credentials were well in-hand, the challenge for Victoria was in finding the right menu of recipes. Thankfully both she and her husband are Destiny fans, and they immediately tackled the problem by diving deep into the narrative, poring through game entries, Web lore, the Destiny Grimoire books, and more to find succulent clues.

“We started doing big dives into the lore,” Victoria said, “There’s lots of little mentions of food. Obviously spicy ramen is a very obvious one but if [Cayde-6’s aviary chum] Colonel [is] sticking around, she has to be providing eggs. There has to be more recipes there! And then [Bungie] came out with The Dawning and I was like, ‘Oh perfect! Thank goodness, the dessert section is covered!’”

The central narrative of the Destiny cookbook centers around Eva Levante, who acts as host, guide, and curator for the reader through the various locations and recipes that the book introduces. Along the way, readers will enjoy entries from important Destiny 2 characters like Ana Bray, Amanda Holliday, Zavala, and more.

The recipes themselves are organized thematically or by location; for example, treats like Chocolate Ship Cookies and Burnt-Edge Transit are found in the “The Dawning” section, while hearty dishes such as schnitzel, German potato salad, and French Onion soup are tucked in the “EDZ: Trostland” chapter. There’s an assortment of urban fare in the “City Life” section, such as Gyoza, Bulgogi Burritos, as well as “Exotic” foods such as the aforementioned Izanagi’s Burden, and even an Ace of Spades recipe (only this time, the results don't become a Banshee-44-approved hand cannon).

International variety is a core component of the recipe lineup, and it’s a notion that is supported by a deep cut lore entry from the first Destiny Collector’s Edition: The City Library. As Lorraine explains, “It's kind of like the Library of Alexandria, where all the books that ever existed would be copied and brought to the city. All of the literature that exists in our solar system.”

“[Victoria] actually surprised us with the manuscript with some of the things she suggested putting in there,” said Lorraine. “We asked her to cite a lot of sources and she did. She's already done her homework and had found these angles for how to approach the fiction.”

It shouldn’t come as a surprise to hear that Victoria is a Destiny 2 player herself (a Warlock main, for the record). And, in addition to collecting and providing the recipes, and writing all the character entries, Victoria also took all of the photographs that grace the cookbook’s pages. An avid photographer, she said this project pushed her skills in new directions, whether it was setting up attractive shots of large meals (a tricky proposition when compared to more traditional Instagram-like shots of single servings), to making sure the photos themselves felt like they were pulled from the world of Destiny 2. 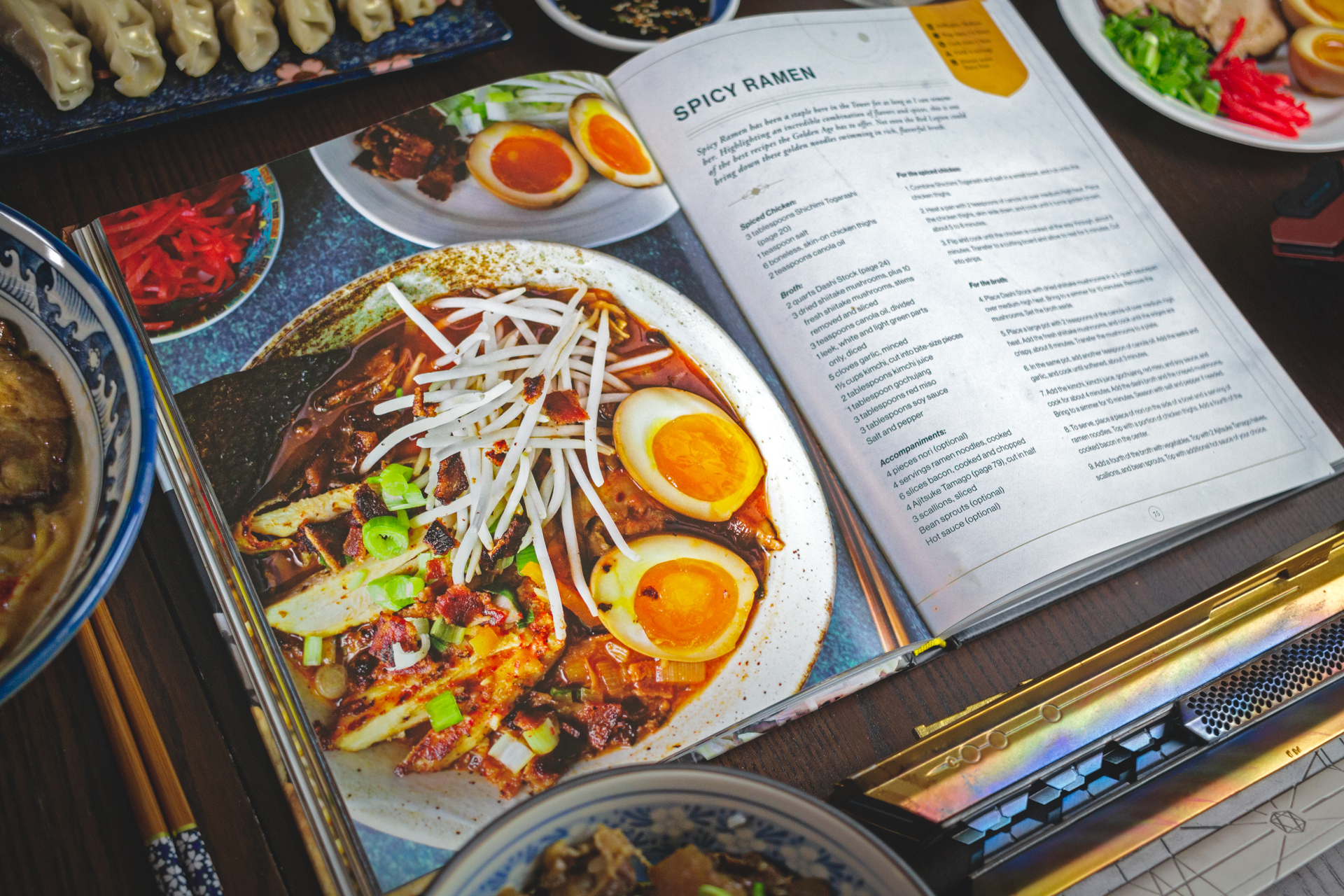 Sometimes that meant working with some fantastic props. “We got a Sunshot [replica] to visit us at home. The moment I opened the box I was like, ‘Oh my gosh, this gun is huge.’ We took it out and tried to take pictures with my corgi Kanji but he was spooked by that thing. That was one of those moments where you're like, ‘This is really cool.’”

Whether you’re an old hand around the kitchen or you don’t know your balloon whisk from a basting spoon, there’s something for you to try in the book. Victoria suggests starting with something like buttermilk biscuits, or the banh mi burger; the former is one of her guilty pleasures, the latter, a friendly introduction to Vietnamese cuisine. “It's in burger form so instead of beef patty, it's a pork patty, there's pâté in there; there's pickled vegetables and cilantro. You get the taste of bahn mi but it's a burger, something that's a little more approachable.”

Research, writing, photography, check-ins, more research, more writing. There’s a lot that goes into the making of something like Destiny: The Official Cookbook. Alongside all that hard work, however, there’s some fun, too: namely trying out the recipes. “Everything gets eaten (beforehand),” Victoria said. “I typically [have] a crew of people I'll have come in for the weekend. [I’ll say] ‘Hey I'm making this set of meals, please come eat some food because I have a lot.”

And hopefully lots of leftovers.


Destiny: The Official Cookbook is available for purchase now on the Bungie Store (U.S., E.U.)