A BUNKER BUILT FOR TWO

Steps disappear into the darkness below. Bulbs begin to buzz and flicker to life, revealing the shape of the room. A low platform extends through the center, flanked on both sides by hastily abandoned desks and consoles. Soft mechanical clicking and whirring sounds fill the air as data storage bays awaken under a blanket of dust.


Code begins to scroll across a massive collection of monitors hanging in a circular pattern in the center of the room. Random at first, the text begins to coalesce and take shape – growing to fill several of the screens with a bright golden orb that quickly scans the room before setting its gaze on the entrance. The eye of Rasputin waits.


And wait he must. The image of the Rasputin’s bunker vanishes from Dima Goryainov’s monitor as Bungie’s senior concept artist alt-tabs into a conference call. It’s 3:30 PM and that means it’s time for his team’s daily coffee break. “It’s our time to chat,” he says. “Usually we’re pretty heads down, so we try to hang out and talk about whatever’s exciting us – things that inspire our creativity.”

Finding inspiration in his peers and outside of games is something Dima is no stranger to. It’s an approach that has served him well while working on Destiny – particularly when he was tasked with designing a space in Season of the Worthy that would help players grow closer to a legendary character not known for his interpersonal skills: Rasputin, the Warmind.

A tall order, considering that at this point in Destiny’s story, Rasputin’s relationship with the Vanguard was tenuous at best. But when a new threat appeared in the skies above the Last City, a choice presented itself to both parties: work together and survive or perish alone. For Guardians, surviving meant partnering with Rasputin in a way they never have before.

The team at Bungie knew that Rasputin being open to an alliance was only half the equation – the easy half. Getting Guardians to trust him with their lives would be much harder. It required heavy lifting from writers, designers, engineers, and artists like Dima. And so, the task of making the most powerful military intelligence ever created a little more personable began.

Dima has a unique style – a blend of graphic design and concept art that can be found throughout Destiny 2. From signage hanging on walls to the logos and iconography representing fictional organizations and foundries, it’s an aesthetic that has become inextricably linked with Destiny’s world building. 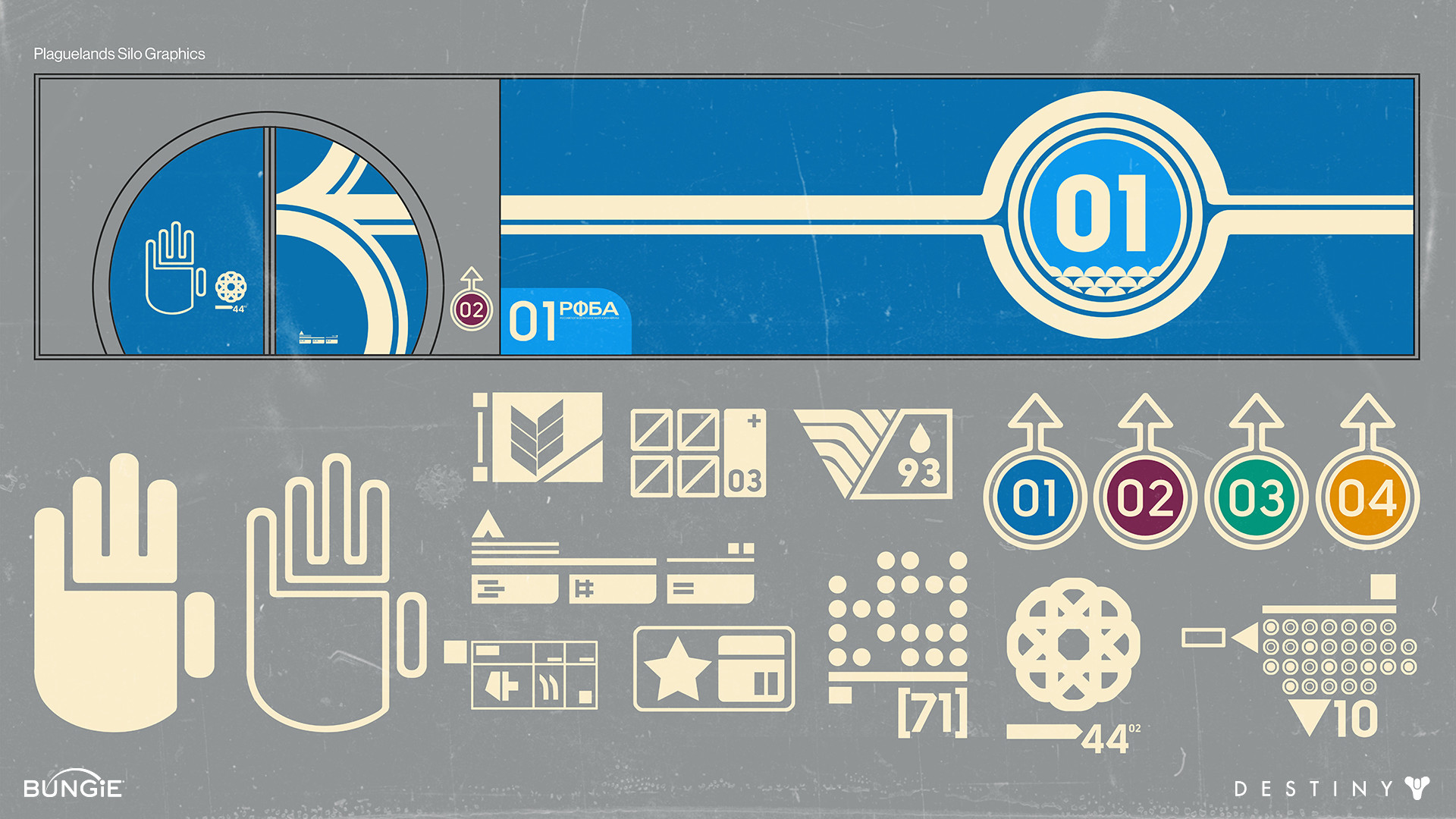 He explained that entering the game industry from a different direction began with the choice to major in graphic design and digital media instead of game art at the University of Advanced Technology. “The game art program was focused on taking direct inspiration from games and translating that into assignments. That seemed totally legitimate, but I felt that doing a program like graphic design would give me a more unique skillset. I was always interested in graphic design, industrial design, architecture, and comic books – things outside of games that I wanted to bring into concept art.”

Among the areas outside of games he draws inspiration from, he finds the dark and mysterious style of medieval design appropriate for Destiny. “A lot of it has this occult feeling to it,” Dima said. “The way it’s drawn is naive, like they're not paying attention to anatomy, but it still works. I feel like that fits in a dark fantasy space opera.”

He also admitted a few personal influences he tries to not overuse. “I’m from Russia and I like to use things from my childhood that inspire me. Old Russian fairytales like Koschei the Deathless, Ilya Muromets, Baba Yaga, and many others. The summers I spent exploring the forest and the countryside in my great grandma’s village were a huge influence. I think I’m constantly trying to get back to that feeling I had when I was a kid.”

It’s the kind of goal that often results in work that feels tangible.

“Maybe it sounds cheesy,” Dima said. “But I credit that time with having an interest in stories about searching for adventure and mystery in different worlds. It’s why I became so interested in the world of Destiny and why I can’t believe I get to contribute to its development.”

When it came time to create the look of Rasputin’s bunkers, the request from the Design team was straight forward. They already had the gameplay systems in place and needed an area where players could communicate with Rasputin – a space that could evolve over time. 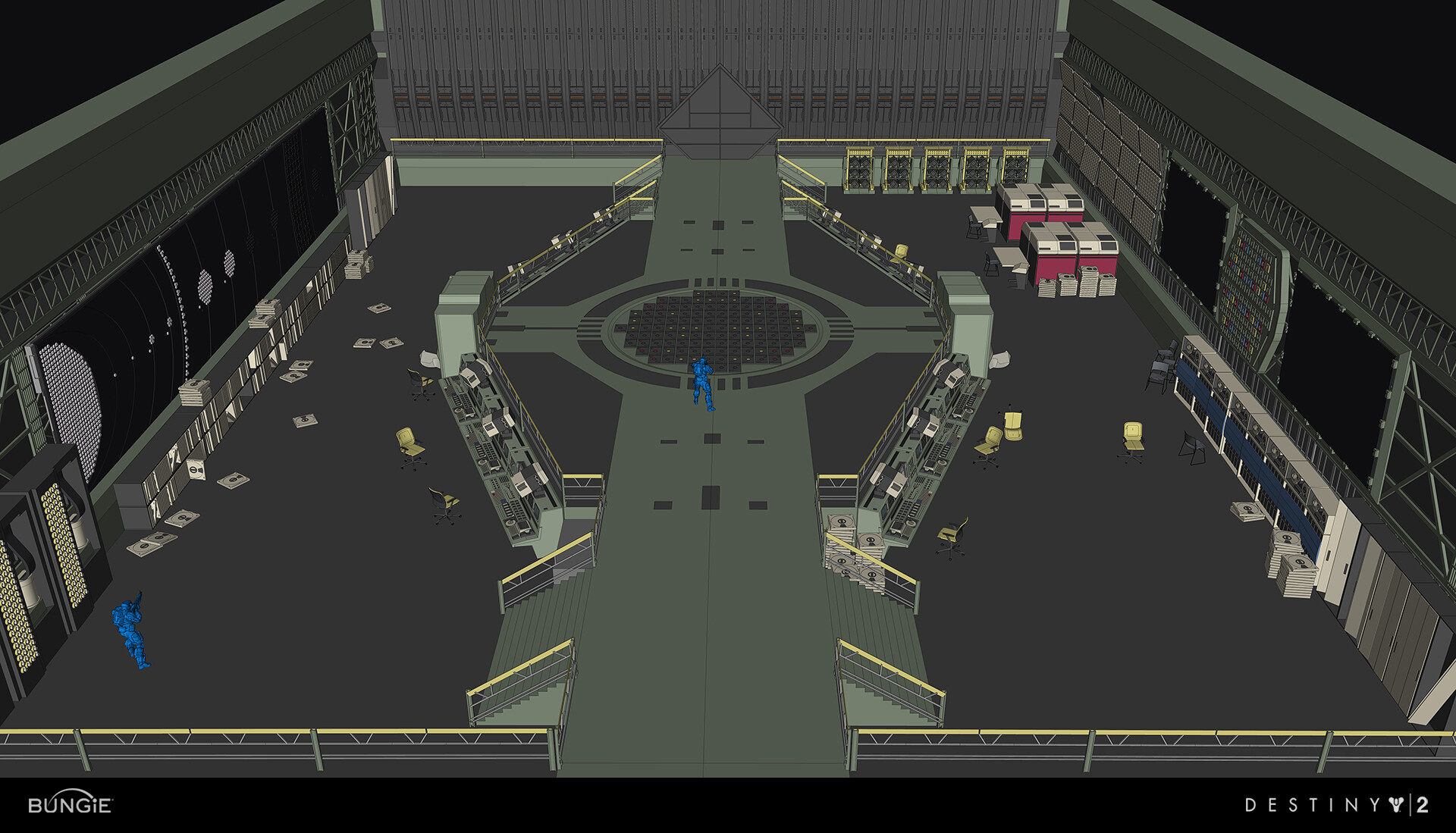 Dima had a very specific mood in mind. “On my reference board, I have a photo of Deckard's apartment from Blade Runner,” he said. “I knew that was the feeling I wanted. It's a dark-lit, super intimate, quiet place where players could go and hang out. I like moments in our game where you have silence. Where you're not being shot at and you have a moment to relax and take a breath. I wanted it to be a space that you would like to be in even if you weren’t doing the mission or grinding the content.” 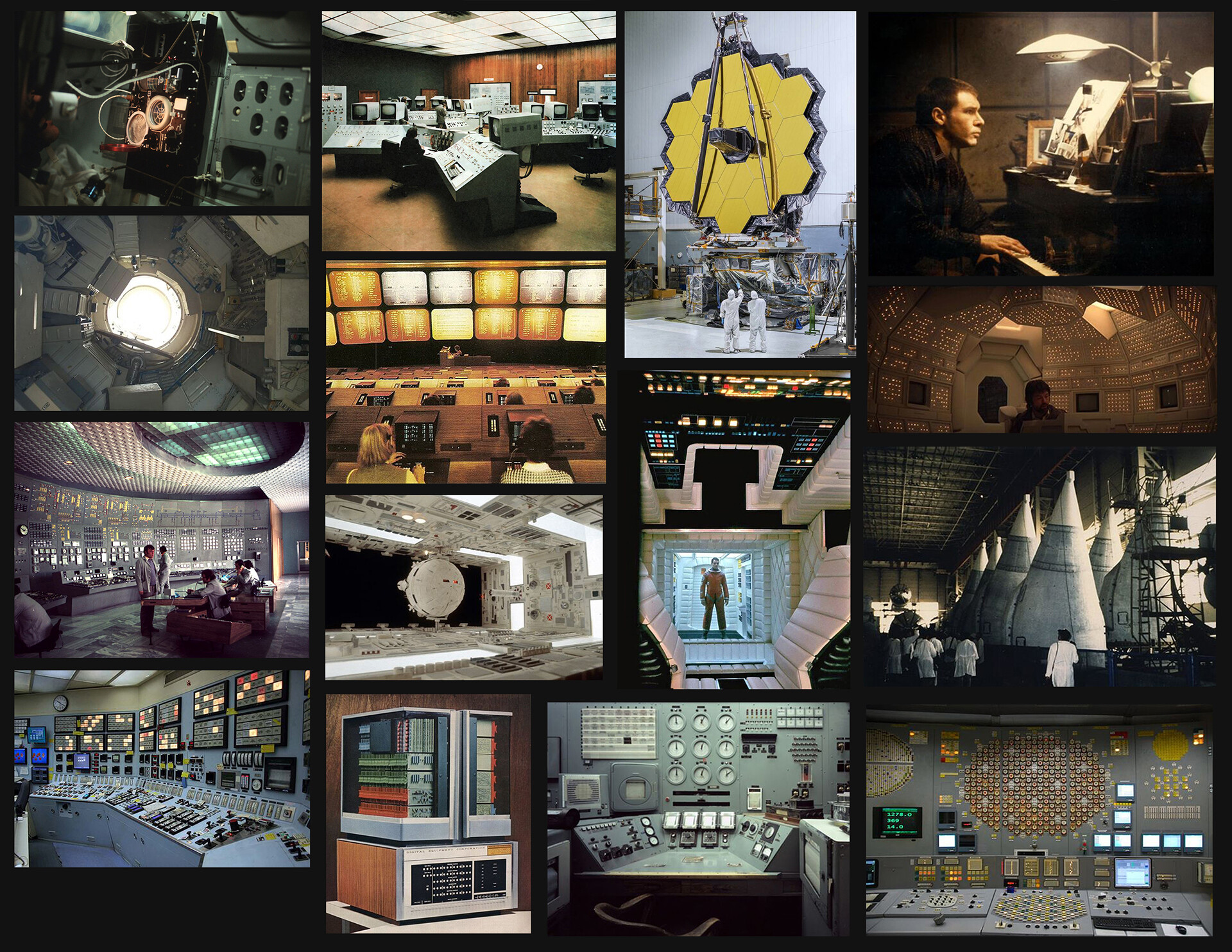 He thought back to one of his favorite games that had a similar vibe. “Deus Ex: Human Revolution is one of my favorite games of all time,” he said. “If I was in between missions, I could go back to Adam’s apartment and just sit and listen to the music and absorb the ambience – I wanted the Destiny version of that space.”

As pleasant as that sounded, it presented an interesting puzzle since the story called for Rasputin to be in this room with the player. And it’s one thing to make a space feel safe and inviting. It’s an entirely different thing to make that space feel comfortable when there’s a huge digital eyeball tracking you from the center of the room. Dima and his team worked to try and find subtle ways to make Rasputin less intimidating. 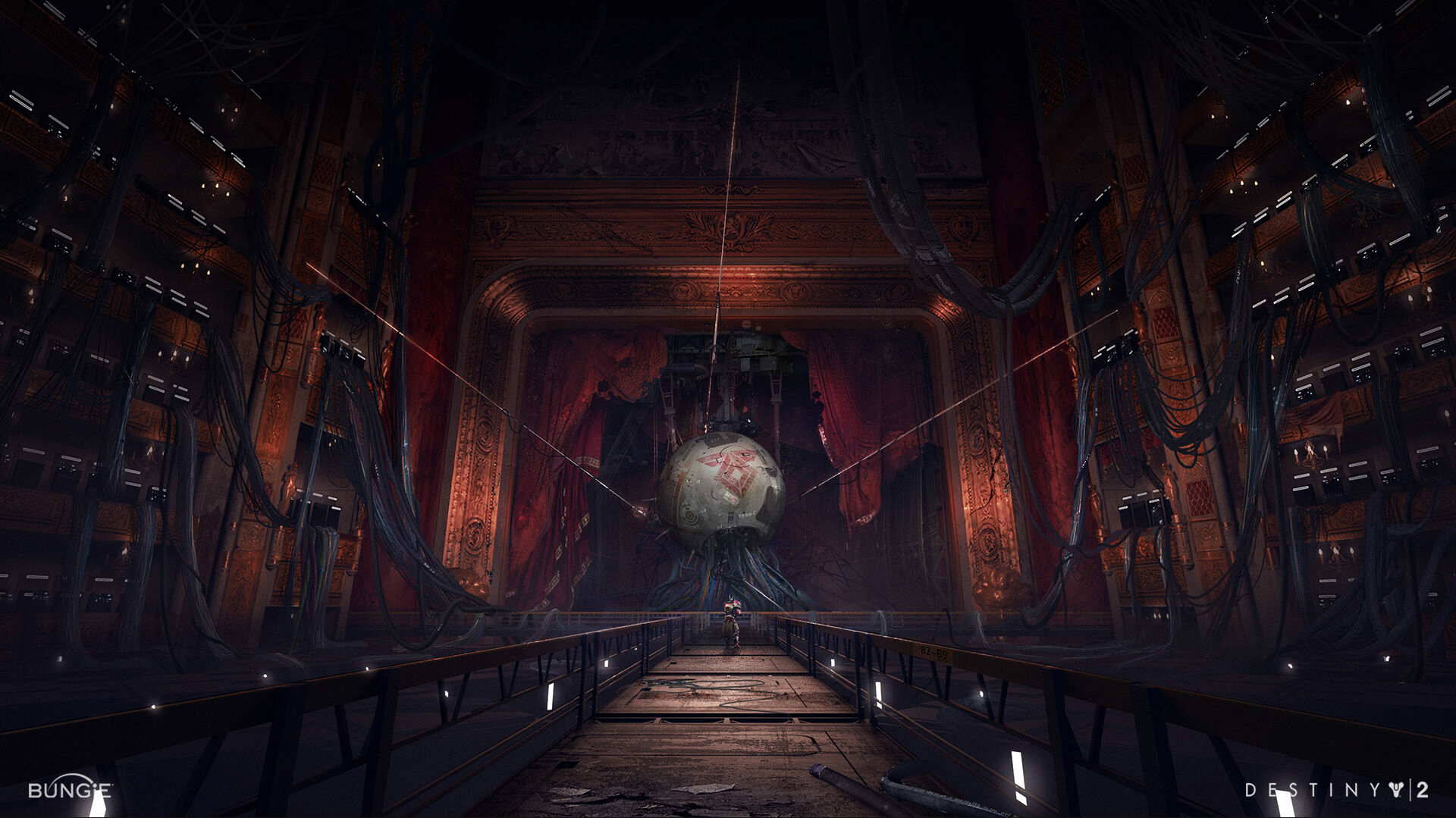 “Usually when you see Rasputin, he's really far away in that massive chamber,” said Dima. “But in Season of the Worthy, the small bunker is a new place where you can be one-on-one with him as he slowly opens up to you while you learn more about him.”

Dima credits Bungie Senior Art Lead, Rob Adams with the idea to bring players physically closer to Rasputin. “It was Rob’s idea to bring Rasputin so low to the ground that you could come up to the screens and be face-to-face with him. Even a lot of the lighting decisions came from how close you're able to stand to him. Drawing parallels between your physical and emotional distance was intentional.” Form followed function. 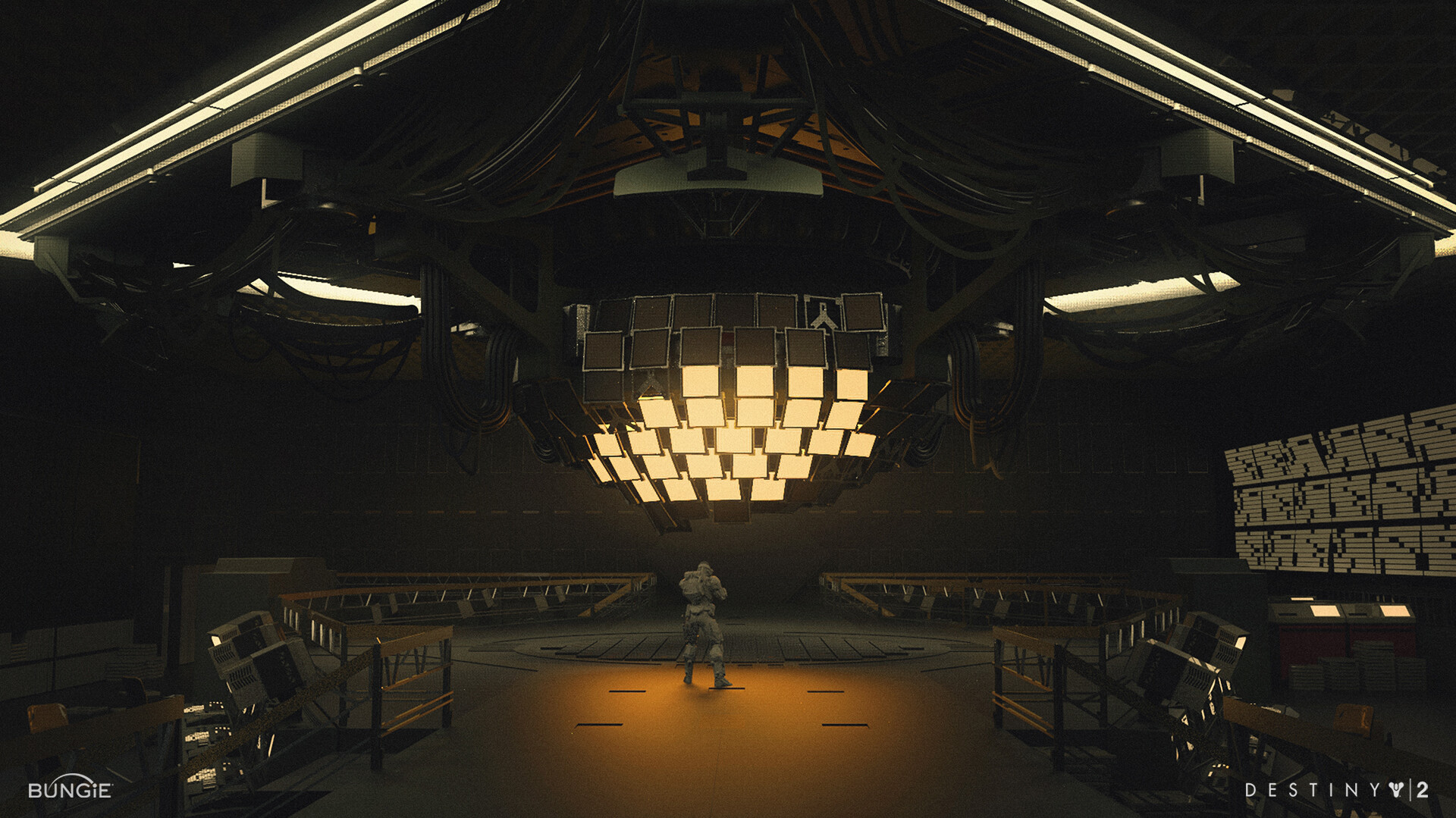 Beyond resonating emotionally with the player, there needed to be an in-universe reason for the design of the room. So before putting pen to paper, Dima asked the question: Why did this bunker exist before players found it?

“As soon as you walk in, you understand that place was used for something,” Dima said. “This room had a purpose and a function – it wasn't just made for gameplay. I had the idea that these bunkers were where Seraph researchers would speak with Rasputin and decode his communications.” 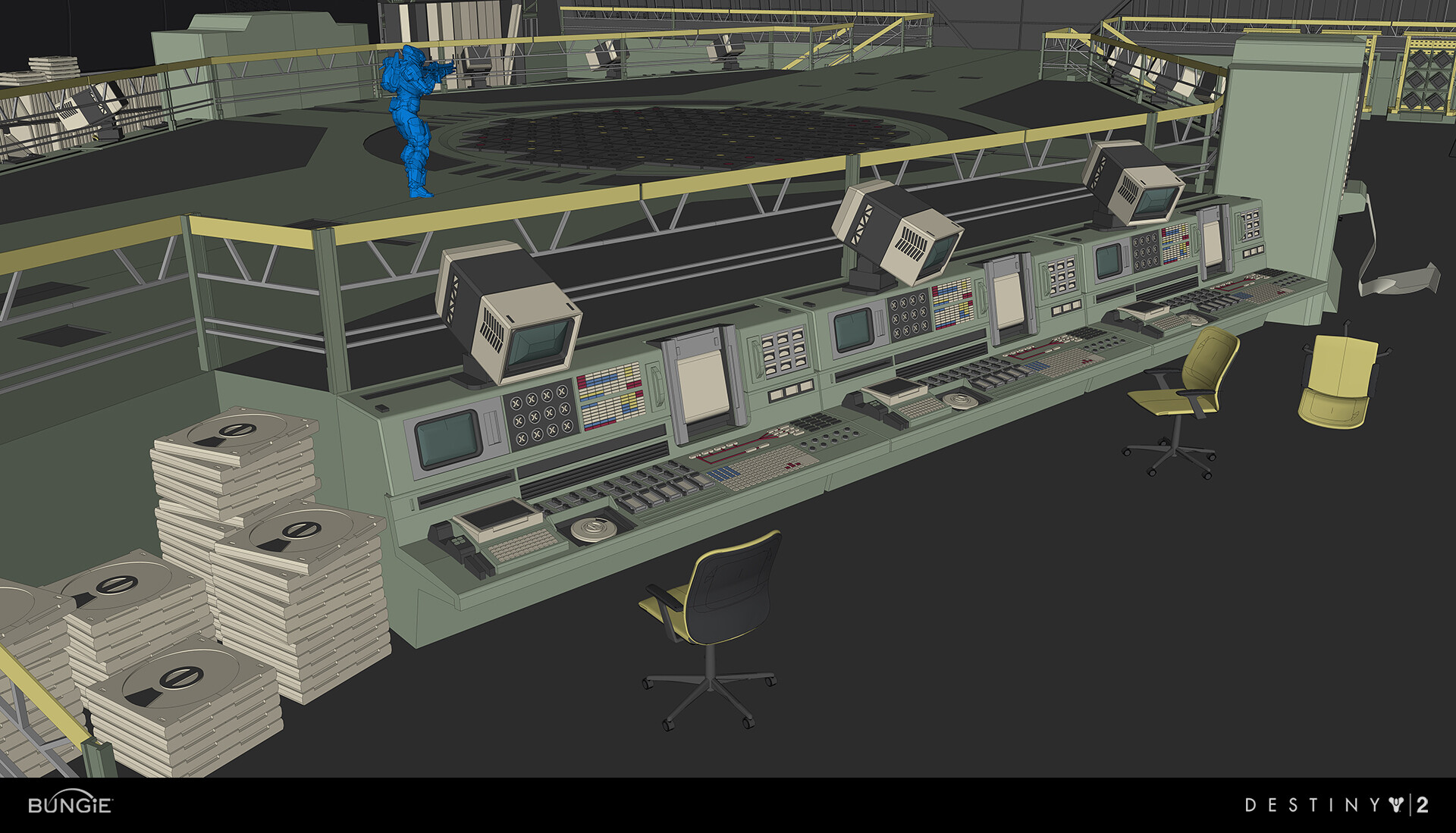 The relationship with the Narrative team immediately became apparent. “We work together as much as possible,” Dima said. “Sometimes Narrative will come up with ideas for a design or how a graphic should speak to specific elements. Other times, I'll pitch something visual and it'll end up working into the fiction.”

In this case, the fiction spoke directly to what excited Dima’s about Destiny. “Since these bunkers were from earlier versions of Rasputin, I knew that they were going to feel older technologically and that's a big part of what Destiny is to me. Obviously we have holograms, but it's not really super sleek Iron Man stuff – everything is tactile. Everything in Destiny feels like it has a history behind it and that it's been touched. That's way easier to do with physical things like screens and buttons.” 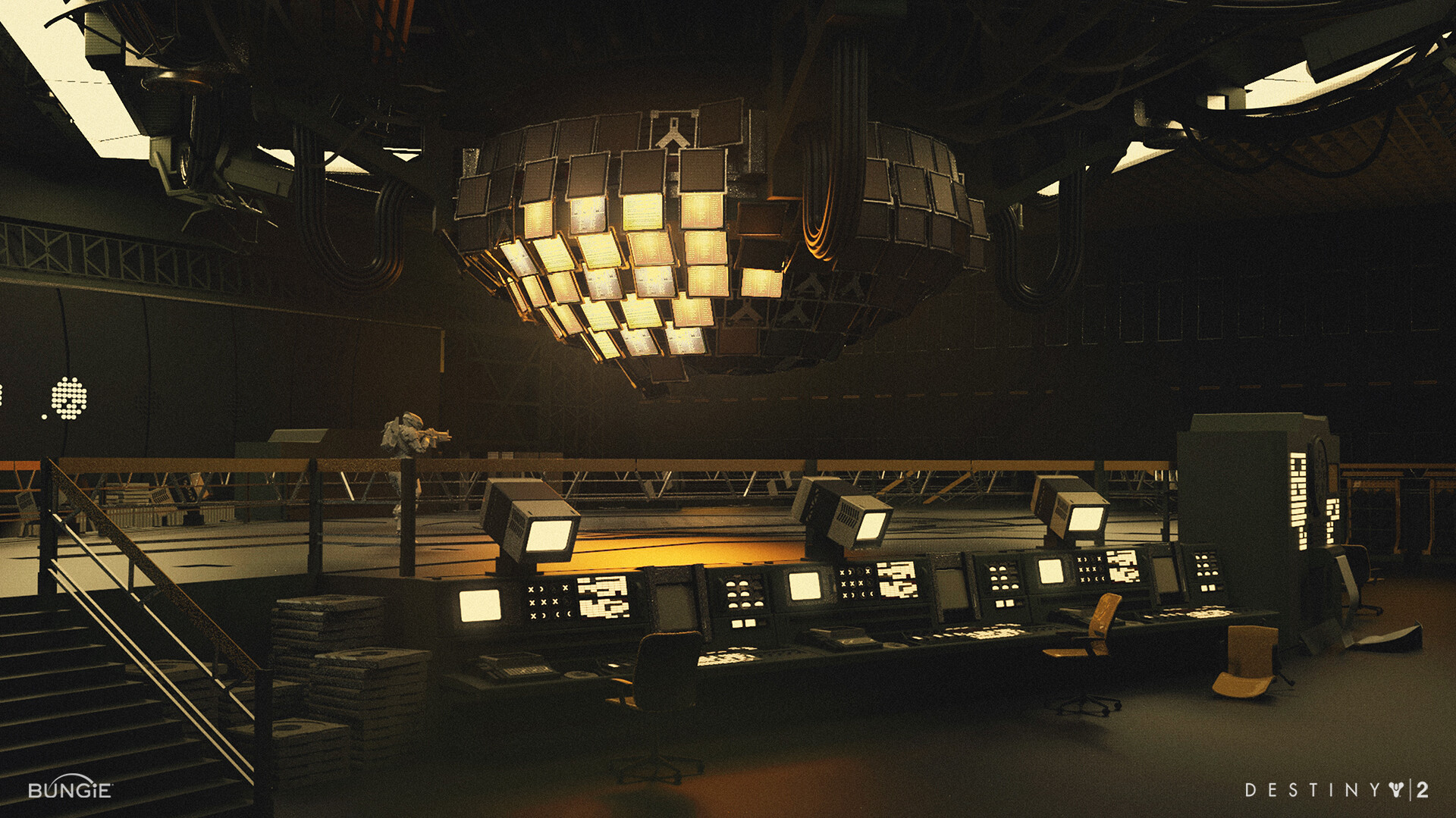 Dima leaned into the look of this older age and drew from his interest in industrial design. “There’s a single speaker in the room that Rasputin used to talk to the researchers,” he said. “The big cluster on the ceiling has all these cables, sensors, and cameras that point to the center of the room allowing Rasputin to see the person speaking to him. And as they’re speaking, there are people sitting at consoles recording everything that Rasputin is saying – decoding and storing it. So when you walk into a bunker, you start to understand the background of the Seraph researchers that made Rasputin.”

TURNING ON THE LIGHTS

The bunker is filled with elements that contribute to the atmosphere of the room while also adding to the story. Some flourishes, Dima admits, were added simply because he was looking for an excuse to design them. “I really wanted to have this analog map with physical bolts that light up,” he said. “But I kind of did that for me, because I really wanted it.” And why not? After all, who hasn’t fantasized about playing with a giant Lite-Brite? 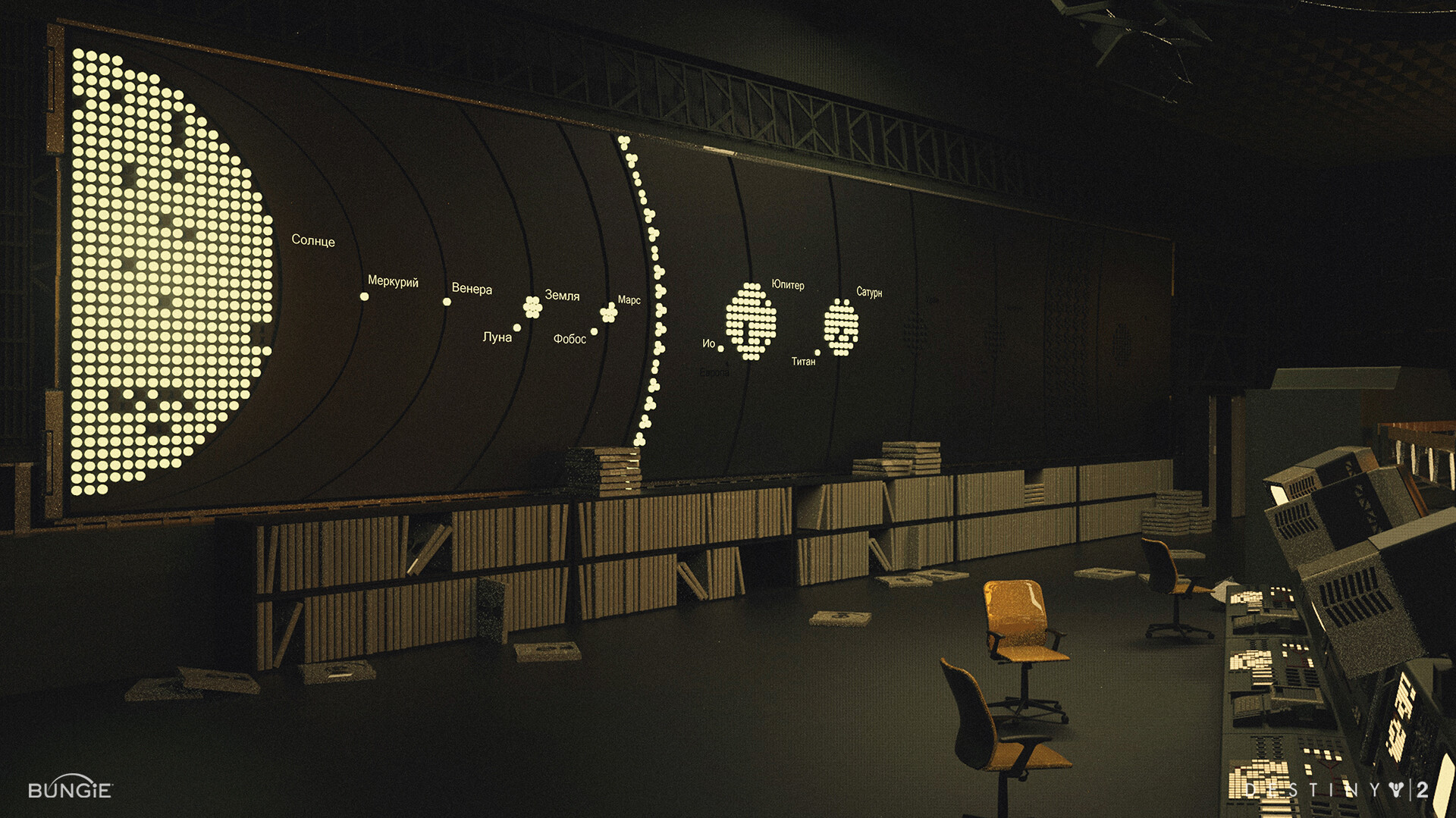 “I didn't really think that the map was going to get much of a reaction or that anyone was going to pay much attention to it. But from what I've seen, a lot of people have gravitated towards it and started speculating on what it might mean. People have messaged me and told me that it’s their favorite part of the bunker, so that was kind of cool.”

Inspiring elements continued to come from peers across the studio. One from Senior Artist, Eve Campbell and the Environment team instantly became one of Dima’s favorite things in the bunker.

“They made the screen effects look really cool when you're talking to Rasputin,” he said. “The way he moves on the screens and tracks you across the room. It's meant to be this intimate space that’s really comfortable but there’s this degree of uneasiness with him silently and constantly watching you. Even if you jump up and down his eye moves up and down with you.” 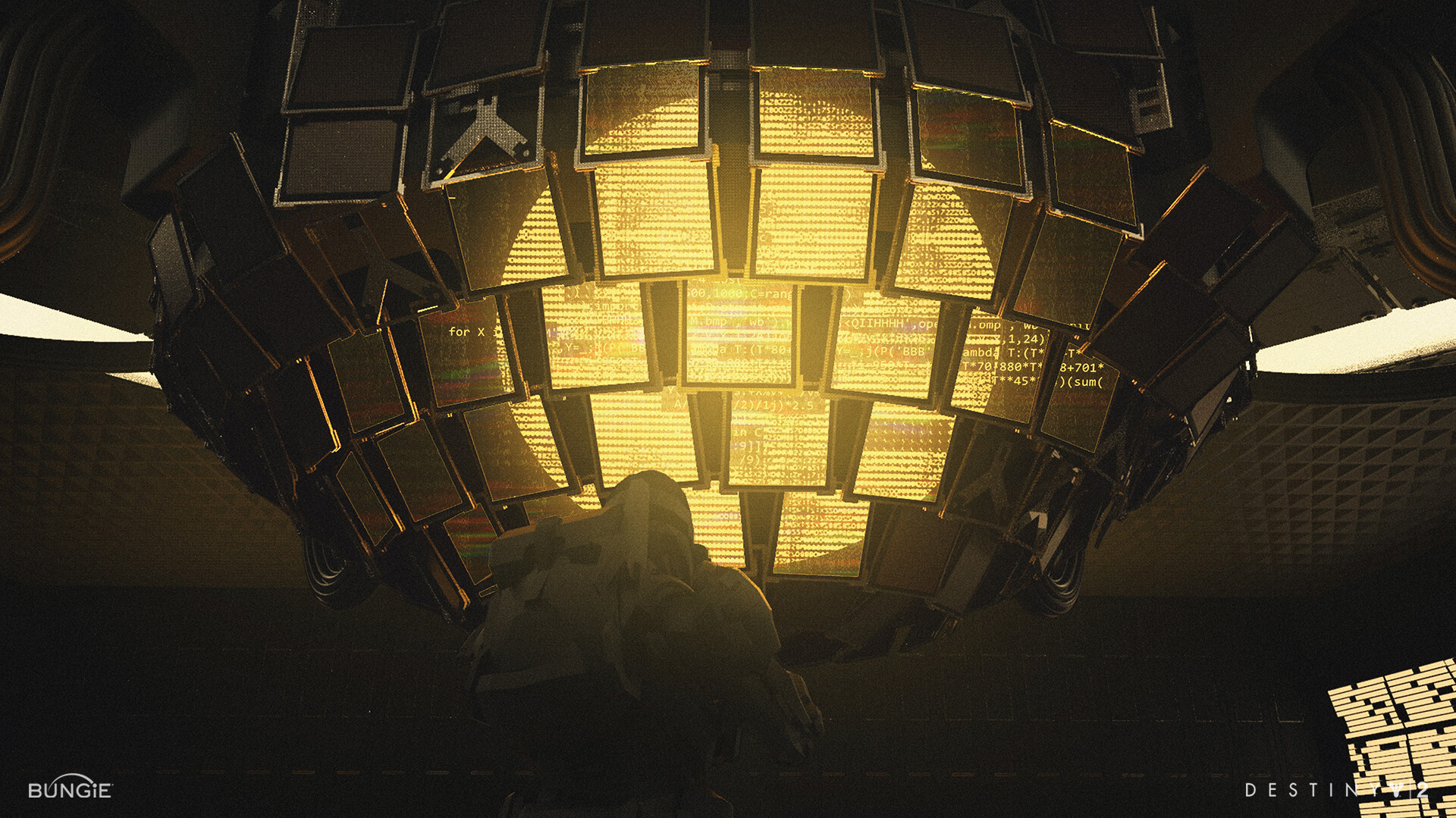 Instances like this, where creative partnerships resulted in something unexpected, kept surfacing. “Over time, we've evolved the collaboration process and it feels really organic,” Dima said.

Throughout his five years at Bungie, Dima has worked alongside peers invested in building living breathing worlds. Speaking with him leaves the impression that if you work with passionate people, a good idea – like a warmly lit bunker with a giant glowing eyeball – never stays hidden forever.