Mar 29, 2018 - Cozmo
This week at Bungie, we deployed Update 1.1.4.
If you haven’t heard, Destiny 2 just got a pretty substantial update. There are changes to your abilities, your weapons, gameplay in the Crucible, rewards in the Nightfall, and more. To give us a taste of the human element behind game development, Design Lead Josh Hamrick sat down in front of a camera to represent the team that worked on this new update.

Want to see these changes in action? We also put out a video showing off the hero moments you can expect in the new state of Destiny 2.

If those videos have you asking questions, all the juicy details can be found in our full 1.1.4 Patch Notes. We’ve already got a lot of feedback about this update and will continue to monitor the conversation. We know this hasn’t addressed all of the concerns brought up by the community. There are other hot topics we haven’t discussed, like Random Rolls, Weapon Slots, and Progression Systems. Our team has been exploring each of these concerns behind the scenes. You’ll see them front and center discussing their solutions in due time. This game update was another step in the direction of our mission to improve Destiny 2.
Drang-o Unchained

With 1.1.4 out the door, we now turn our attention to 1.2.0.
If you have been paying attention to our Development Roadmap, you may have noticed that Exotic Weapon changes will be a part of the next evolution of Destiny 2. We felt like now was a good opportunity for a little show and tell. First off, Senior Designer Jon Weisnewski is here to tell you a little about the changes we have for two of the less celebrated Exotic Weapons in the arsenal.

Jon: Hello everyone. I’m dropping by for another tease of the Exotic Weapon tuning work being done for 1.2.0. Today we’re going to talk about Sturm & Drang.
For those who don’t know the core loop of Sturm and Drang, kills with one weapon reload the other while it’s stowed. Consecutive kills with Drang will overload rounds into Sturm, capping out at a 20 round mag for a Hand Cannon. Currently, the gameplay is focused on fast swapping, and while fun, this lacks that exotic flare we’re hoping to add. Sturm is also a bit unwieldy to use, so we’re addressing that, too.
As standalone weapons, both Sturm and Drang have had their base stats improved for ease of gameplay. Drang now has Rampage and a maxed out magazine to help rack up sidearm kills quickly. The true payoff comes in the overloaded Sturm magazine: overflow rounds in Sturm now have a damage boost of 1.8x. This allows for a significant damage increase in PVE and crispy precision 2-taps in PVP (just don’t miss).

Now that we’ve told you how these guns are changing let’s show you how they’re behaving with the current changes applied.

We’ll talk more about the changes to Exotic weapons in the weeks to come. All of these upgrades to weapon performance will land in the inventory of players when Season 3 begins. We’ll have a lot more to talk about before then.
Companion Update
As the game changes, so does its Companion. The Bungie.net team is working on some upgrades to both the website and mobile apps. These changes will deploy next week.

Bungie.net Team: The companion has a new update coming on 4/4, and we're excited to share some of the details with you.  The team is working on bringing back one of our more frequently requested features from the original Destiny companion -- viewing your full 3D guardian in all their glory and sharing their awesomeness with your friends. Here is what you can expect when this releases: 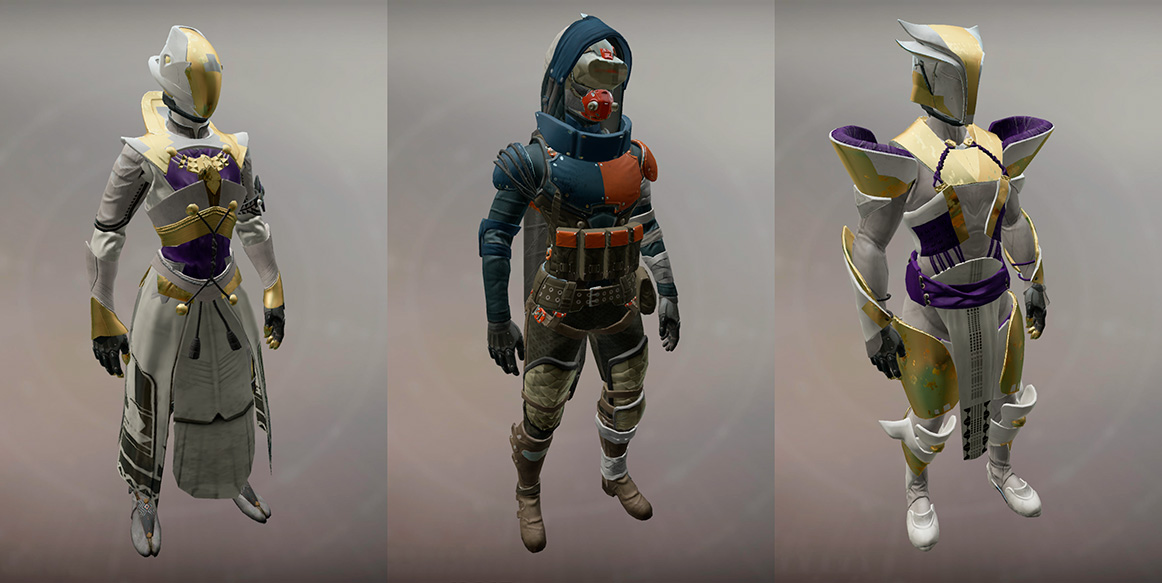 Additionally (coming soon!) the team has been working on the evolution of our existing recruitment feature and will be releasing a beta for the revised experience on iOS and web. Here is an overview of what you can expect with this update:

We expect that this version will replace the existing Find Fireteam feature in the near future, but both will be available when the beta releases.  We're anxious to have you all try the revised version, then head over to the feedback forums and let us know what you think!  While the beta is missing a few important things (an Android version, chat, and locale support), we will be adding to this beta over time, and your feedback is key to making sure is the best it can be.
And last, but certainly not least, the team has made some quality of life improvements to the website and mobile applications:

Long Live the King
New Monarchy cannot be stopped. They claimed their fourth Faction Rallies victory in a row this week. We’re starting to wonder if anyone can challenge the dominance of their growing dynasty. Here are the results of the final Faction Rallies of Season 2: 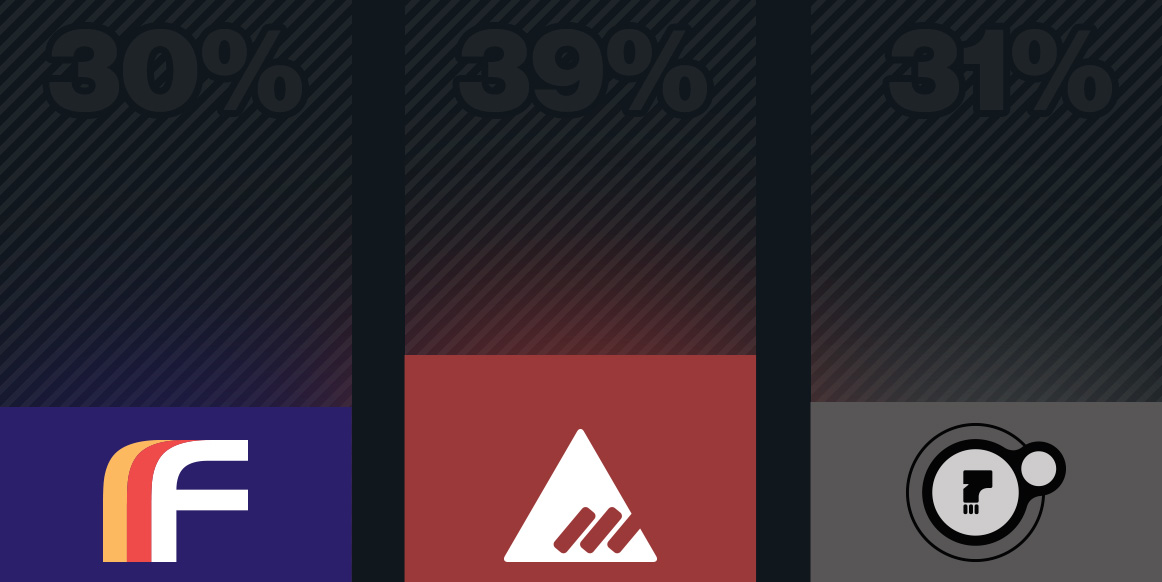 The other two factions will have some time to regroup and plot their comebacks. Faction Rallies is taking some time off while we work on some improvements to the event. Keep an eye on our Development Roadmap for more info on when you can pledge to your favorite faction again.
Most Dangerous Game
With a new state of combat live in the Crucible, you’re invited to hunt us down and beat us at our own game. Next week, we are putting a target on our back. We’ve decided to fire up the stream machine and conduct a Bungie Bounty on PC. Here are the full details:
Bungie Bounty
4/4/18 10 AM – 12 PM Pacific
Platform: PC
Playlist: Mayhem
That’s right, we are going to let the Supers fly and chaos reign as Mayhem will be the gametype. Here is the fireteam of brave Bungie volunteers you will be hunting for.
TTLCozmo
Dmg04
Teribble
Liqvid
If you are able to match against us and win the game, you will be rewarded with this special emblem.

Between matches, DeeJ will be talking to Design Lead Josh Hamrick and Senior Designer Kevin Yanes on the present and future states of the Sandbox and Crucible. Come and hang out in chat, make fun of our performance in the arena, try to stream snipe us from your command posts, or ask some questions of the creators on the couch.
Alpha Dogs
With the introduction of scoring in Nightfall strikes in Update 1.1.3 we decided to start showing off the highest scores each week. Right now it’s more a contest of who can most efficiently clear Lost Sectors during a Strike, but we are working on some changes to that. As it stands, here are the top scores for last week. 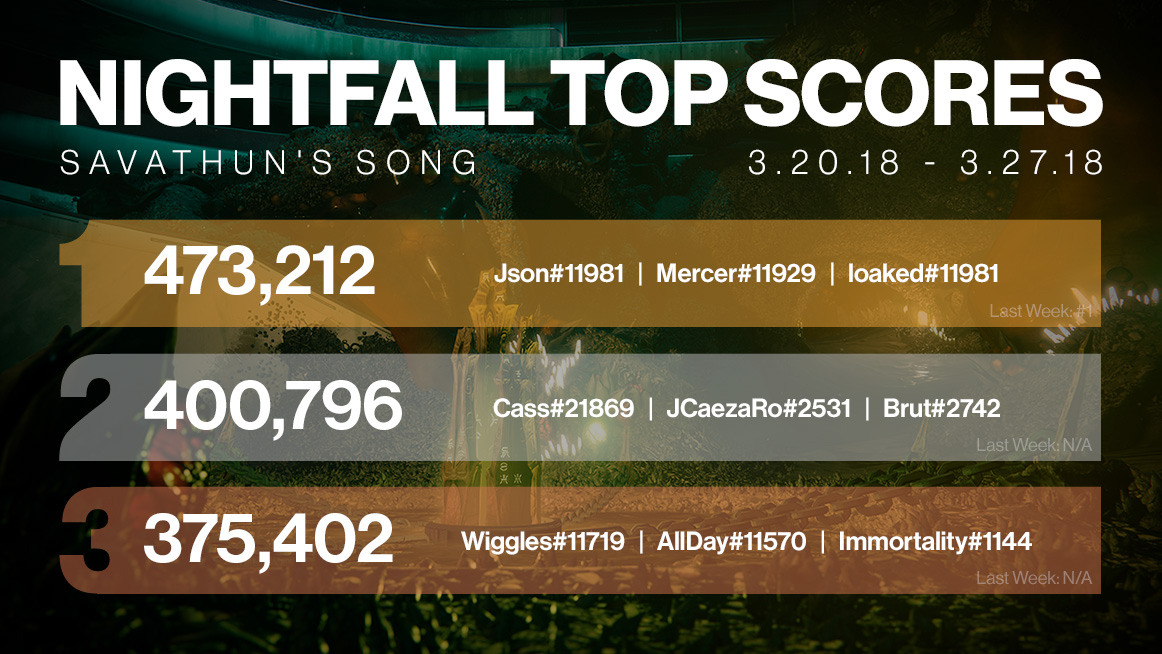 Even with the current methods available to run up the scores, most of the community is putting up scores within our expected thresholds, well below the outliers at the top. Only the top 1% are breaking 100K each week. We will continue to track these scores and evaluate if we should change up the thresholds for earning the emblems.
This is Bat Country

The members of Destiny Player Support are the watchful protectors always working diligently behind the scenes. They are making sure you have the info you need to have the best Destiny 2 experience.
This is their report.

BAT Errors
At the release of Destiny Update 1.1.4, we began to receive reports that players were encountering BAT errors after completing matches. When encountering these errors, players would be returned to orbit and have to manually enter Strike or Crucible matchmaking to continue playing.
We have identified that this was caused by the Strike and Crucible Repeat Repetition feature introduced with 1.1.4, and have since disabled the feature. While players should no longer expect to encounter BAT errors, they will now encounter repeat Strike activities or Crucible maps when playing these activities.
We are currently investigating the issue to see if we can address the root cause of these errors, and potentially re-enable the repeat reduction features.
Issue Progress: Tower Black Screen
Since launch, we have been investigating an issue where players could encounter an indefinite black screen when attempting to load into the tower. This week, we have discovered the root cause, and are aiming to address the issue in Destiny Update 1.2.0. Until resolved, players may have to enter alternate activities from the Director and attempt to re-launch the tower if they encounter a black screen error.

Cream of the Crop

You got some movies for us? Send them to the Creations page. Every week we pick a few to share here, and we send them creators an Emblem to show off to the community. This week is no exception. Here is the cream of the crop.
Movie of the Week: 2 Man Calus 1 Phase

This isn’t even our final form. We have more changes coming to Destiny 2. This was another step. The next one is coming in May. Keep an eye on our Roadmap and we will keep you up to date with what to expect. It’s about time for us to plot more future waypoints over a more distant horizon.
You have a lot of changes to experiment with. We are already hearing some cool stories from the battlefield about weapons and abilities performing well. Just be careful out there with your new powers. Go fast responsibly.
<3 Cozmo