Sep 7, 2017 - DeeJ
This week at Bungie, we started a new adventure.
With a head full of memories and heart primed for action, we launched Destiny 2. Since then, millions of Guardians have evacuated a City under attack to arrive “safely” at the Farm. The game is afoot!
We’ve taken our first steps on a new journey as a community. We expect more players to join our ranks in the days and weeks that will follow. Veterans of our community know that Destiny is not just a story about heroes, but also a world that evolves with you. New rituals will begin. New challenges will be revealed. New platforms will come online. New legends will rise.
Let’s take a look at the next steps we’ll take together.
The Road to Legend
The road to launch is over. The wait is over. The road to legend begins. Gear up. Mark your calendars. Rally your Fireteams. 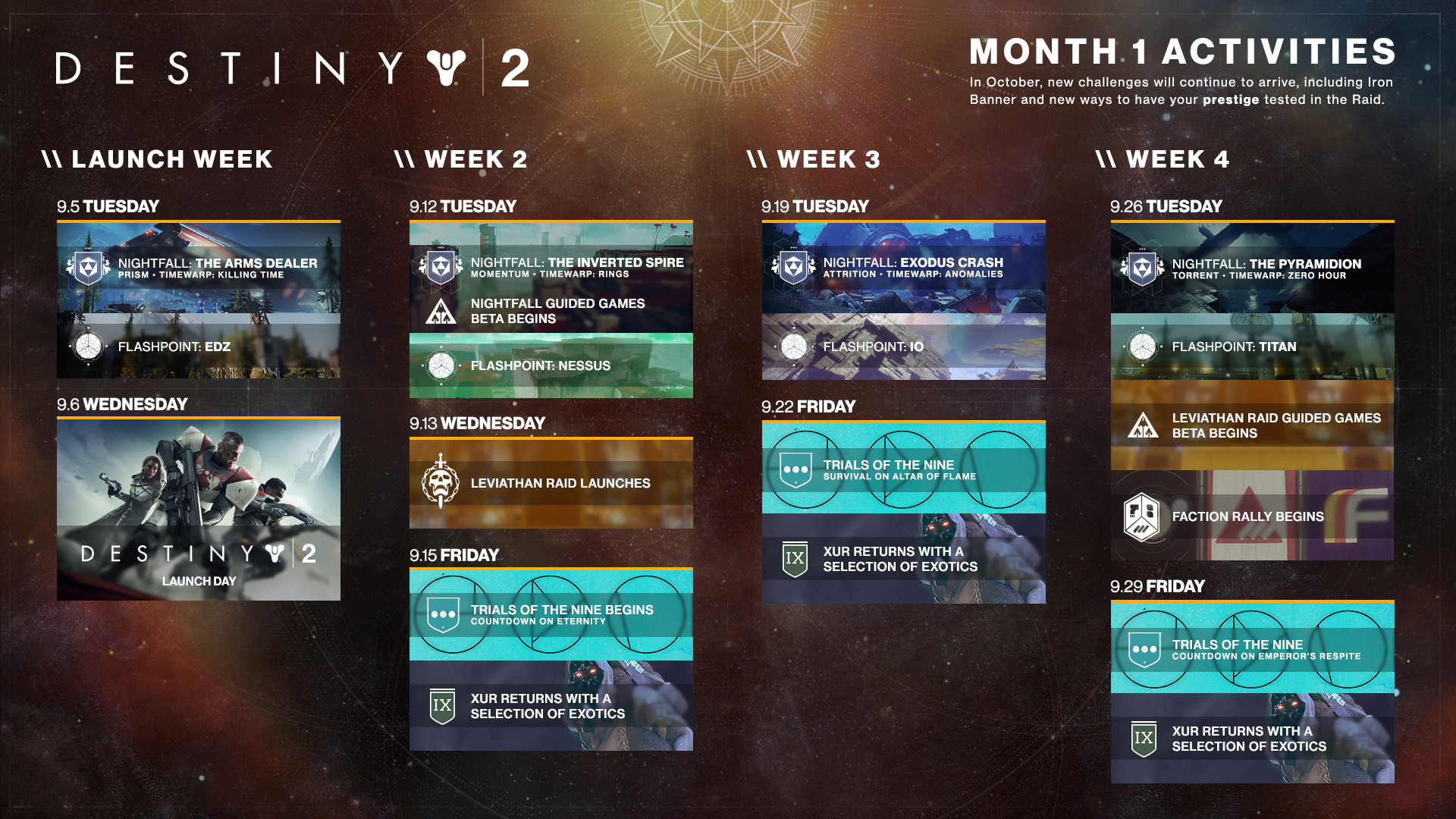 On Wednesday, the race to be the first Raiding party to emerge triumphant from the Leviathan begins.
In October, new challenges will continue to arrive, including Iron Banner and new ways to have your prestige tested in the Raid. We’ll tell you more about what awaits you every step of the way.
#DRUMS
Along with the game that it scores, we have also launched the Destiny 2 Original Soundtrack.

When an artist cuts a record, they sound off about their inspirations in the liner notes. Here’s what our team of award-winning composers had to say about the music that propels us starside. 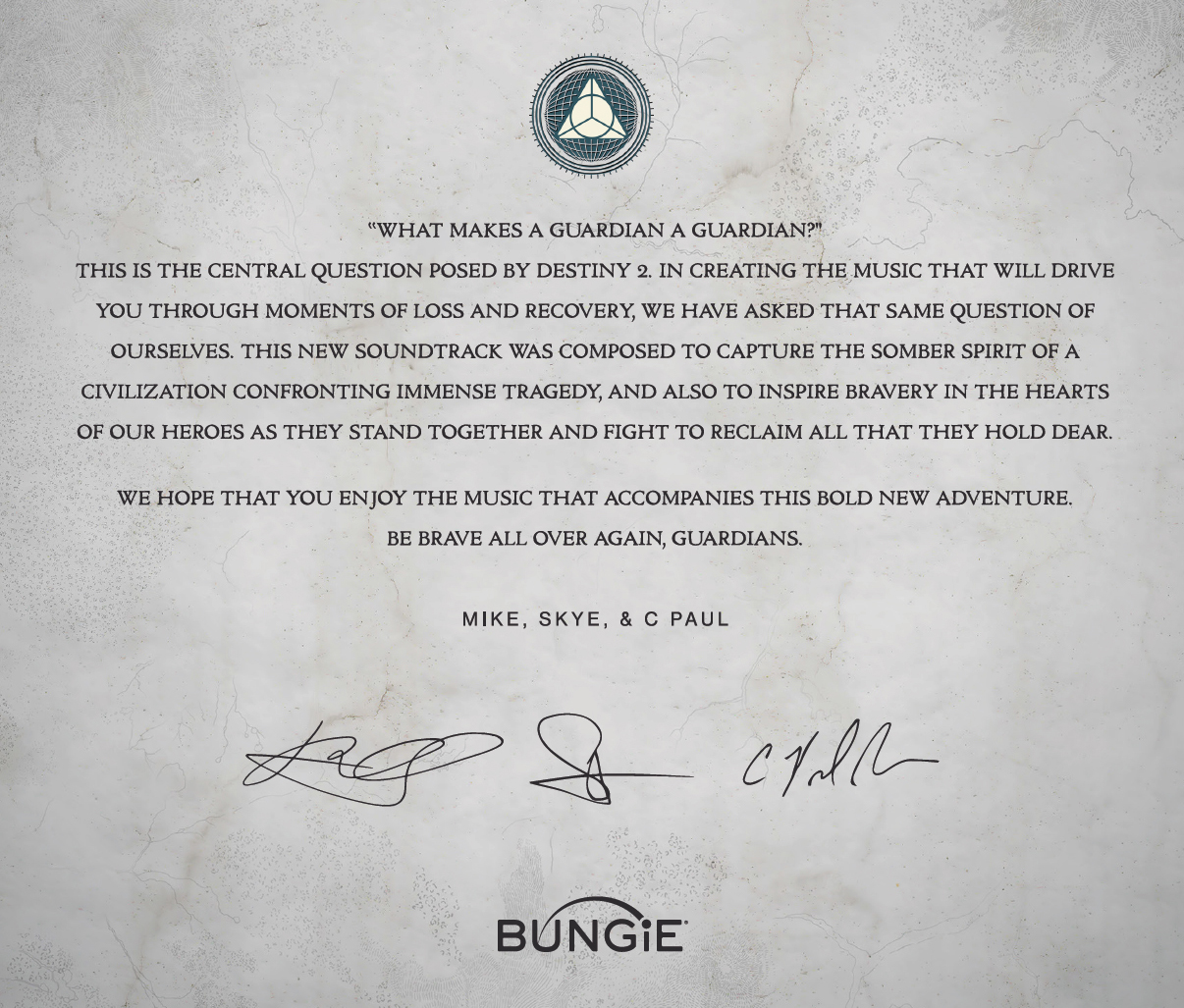 If you visit the Bungie Store, you can add it to the playlist that propels you in real life. It comes with an in-game Emblem to serve as a signal to your fellow players that you hear the music of Destiny in your head even when you’re not exploring the wild.
Cooler in the Shade
Whenever we create new ways to customize your character, players start formulating a plan of attack to build the perfect Guardian – a reflection from their mind’s eye of their inner hero. These plans are best realized over time, as they complete their missions and defeat their enemies. In Destiny 2, there are more options than before for earning and applying color to your character, your ship, your weapons, even individual pieces of armor. The changes to the way Shaders work have started a new conversation in the community about customization and rewards. This morning, Game Director Luke Smith weighed in with some notes on the topic.

Shaders are earned through gameplay: leveling, chests, engrams, vendors. We expect you’ll be flush w/ Shaders as you continue to play. (1/4)

Shaders are now an ongoing reward for playing. Customization will inspire gameplay. Each planet has unique armor and Shader rewards. (3/4)

With D2, we want statements like "I want to run the Raid, Trials, or go back to Titan to get more of its Shader" to be possible. (4/4)

The conversation about all the ways in which we play and are rewarded by the game will continue. We’re just getting started on this new journey. Keep talking. We’re always listening.
After Launch Action Report

As a team, they have been watchful around the clock to monitor the first hours of Destiny 2. They see you when you’re playing. They know when you’re awake.
This is their report.

Destiny Server Queue
When Destiny 2 became available in North America, the Destiny Server Queue was enabled to regulate the increase in player population. Players were able to sign-in without delay within 15 minutes of the queue being enabled.
The server queue may be enabled during the weekend to ensure stability. Players should only expect to encounter the queue during periods when more players than usual attempt to sign in every second. When these conditions exist, announcements will be made via @BungieHelp to communicate the expected impact and duration.
Destiny 2: Active Investigations
Resolved Issues
For our full list of Vital Information and current investigations, please see our pinned thread in the #Help forum.

Tag Team
If you read all of these periodic blog missives, you’ve heard from your Community Manager in recent weeks. We like to pass the megaphone back and forth. This week, he’s back on the beat to find the best videos in the wild.

Cozmo: Welcome to the first MOTW in Destiny 2! We have some great videos this week, hot off the launch of a brand new game. If you’re a new player, or just unfamiliar with how this works, here is what you need to know: Every week, we pick a few of our favorite community-created videos and reward the creators with an Emblem. All you have to do to be considered is submit your video to Creations page. Send in the winners.
Movie of the Week: Guardians, Ho!

We are still working on the Destiny 2 version of the Emblem and all of the winners will receive it as soon as it’s added in a future update.

Really, what can be said right now that wasn’t said (better) by the game? 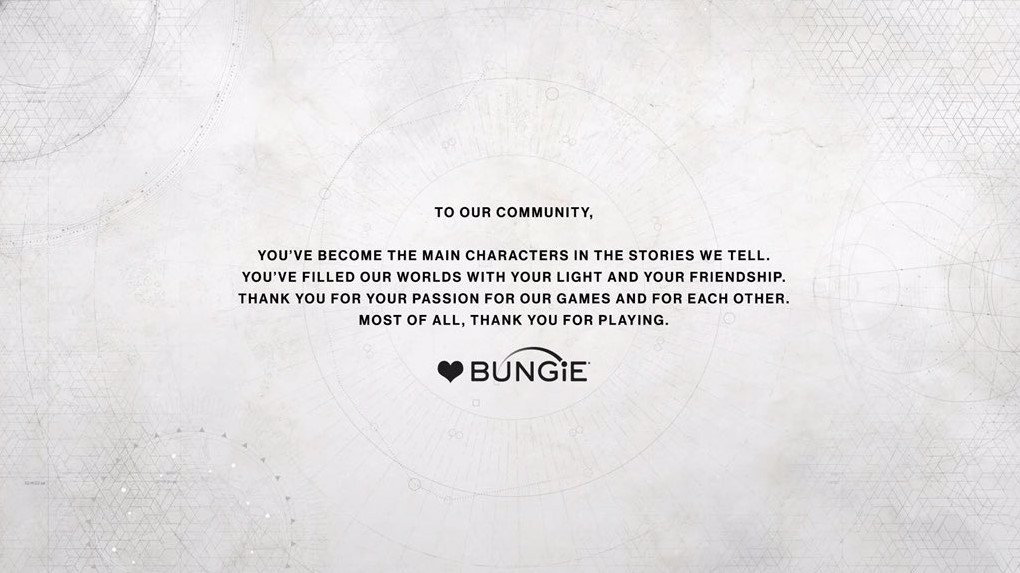 See you in the wild.
DeeJ, out.