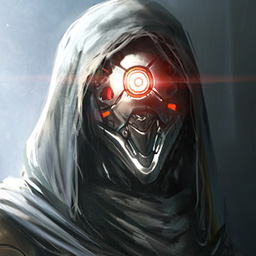 Ah yes. The over-speculated but curious name Nezarec, has so far popped up twice. I’m sure you all know from where at this point. Now, in the second mention as the renegade/Shin recites the places Drifter has been, Nezarec either has multiple tombs, or has multiple set up for a sort of remembrance of him. Just a warning, I will be speculating that this “Nezarec” is either Hive or Darkness related. Hive, and the Darkness in general has always given me of a sort-of Lovecraftian vibe. Hell, the Darkness is even a title in the Lovecraftian universe. Now, in the helmet’s description, Nezarec is referred to as a sort of “fiend”, and at the same time, a god. If some parts of Destiny are truly influenced by the Lovecraftian universe, then using these descriptors we will be able to deduce what god is being mentioned. By no means am I an expert of Mythos deities of any kind, so bear with me. If there is a god that comes with a much more similar resemblance, feel free to tell me. One god I could find that mentioned 3 important locations, was a god named Suc’Naath. It is essentially a tornado, which would show pained faces emerging from the violet/yellow-ish wind, and screams could be heard coming from it. That would certainly fit the “pain” descriptor of the helmet. The beast (or tornado, I suppose) has been divided into 3 parts. One, into a comet. Another in a statue located somewhere (not mentioned where) in the World, and the third piece is held genetically within humans. If all three were to combine, Suc’Naath would awake. Now comes the real speculative stuff. [quote]He shall rise again.[/quote] Possibly quoting the union of all 3 pieces of His essence to be reborn. [quote]When the guiding shine fades and all is lost He will call to you.[/quote] Humans who hold this genetic abnormality either had used magic before, or has/had gone insane. We have used a sort of magic, so the question is if we hold this “gene” as well? [quote]”...Is that he will never cower when dusk does fall...”[/quote] He is considered a “mindless” god in the Lovecraftian universe. It could be he cannot cower because he doesn’t know how to. Plus he is a tornado. That’s all I have for now. Sorry this was so long. Feel free to leave your thoughts. Edit: A side note that the name Golgoroth from the King’s Fall raid was ripped directly from the Mythos, thus reinforcing the relation of possible influences. Edit 2: I looked to make sure, Nezarec has at least 4 tombs, not 3. My point still stands, doesn’t mean that Nezarec was ripped entirely from the Mythos. Could be inspired. After all, Golgoroth wasn’t a massive frog in the game, it was an Ogre.
English
#lore #destiny2 #Darkness #nezarec
Comment Reply Start Topic
Report