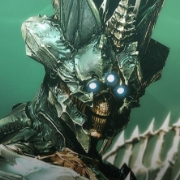 DeathPony07
@dmg04 Ability cooldowns need to be reduced to D1 settings. Less space magic isn't fun. The Vortex Nova Bomb needs a bigger blast radius. The Slova Bomb is buggy, and sometimes doesn't even kill enemies. The 'shoot' button during Stormcaller is buggy and non responsive sometimes. The same goes for the 'square' (PS4) button when trying to pick up an arc charge, revive, etc. If I'm holding the button down already, it should work. I shouldn't have to press it again. Bring back the primary/special/heavy loadout. The new one sucks. Our characters are slow, weak, and the hunter and warlock jumps are terrible. Bring back machine guns. Int/Dis/Str. Mobilty/Armor/Recovery adjustments should be put back in the skill trees like D1. Make tracking available on ALL launchers. Bounties. Stop designing your strikes in a way that lets lazy players just run past everything. Make shaders infinite use, and add a shader kiosk. Let us use our sparrow on Mercury. Tone down the teleport ability of Minotaurs and Captains. Add Death From Above(Striker) and Combustion(Golden Gun) to the skill trees. Make the Sunsinger super an option in the Dawnblade skill tree. Random rolls and better perks on weapons. Add some more legendary VoC/Cryptic Dragon design scout rifles. Buff Firefly/Dragonfly. Each season should add new weapons like D1. Not just re-skins. Make exotics worth using. Get rid of stupid perks like "reloads your sidearm." That's not exotic. ex. The Sunbreaker gauntlets should grant an extra grenade like they did in D1. Hire writers that actually use the grimoire lore in their stories. If 'important targets' are engaged in combat with a player, they should not disappear. Buff snipers in PvE. They can't even one-shot a shielded red bar enemy. Factions should be available all the time. Get rid of the pointless faction rally. Give Ikora a unique/better loot pool. Make her meditations worth doing. If we are at 334 light level, exotic engrams should decrypt at 335, not 334.
English
Comment Reply Start Topic
Report