Sep 16, 2021 - Cozmo_BNG
This week at Bungie, we sent you out on a new quest.
It’s a new week and we kicked off a brand-new quest. Ager’s Scepter is a weapon worthy of a king, errr a prince. Either way it’s yours for the taking. Sorry Crow, no hard feelings since you did... you know.

This new Exotic Stasis Trace Rifle is sure to chill your enemies out. I was going to start listing off Mr. Freeze quotes, but I’ll spare you this time. If you have purchased Season of the Lost, you can start this quest by speaking with the Queen, Mara Sov. If you’ve already obtained the weapon, nice job! You can start hunting for the catalyst after the reset on September 21.
That is not all that is going on this week. We’ve heard some chatter around some new discoveries in the Shattered Realm. We don’t like spoiling secrets though, so you’ll need to go investigate. Or just go check YouTube, we aren’t the boss of you.
We also released a new calendar this week to showcase some of the beats coming later in Season of the Lost as we lead up to The Witch Queen early next year. 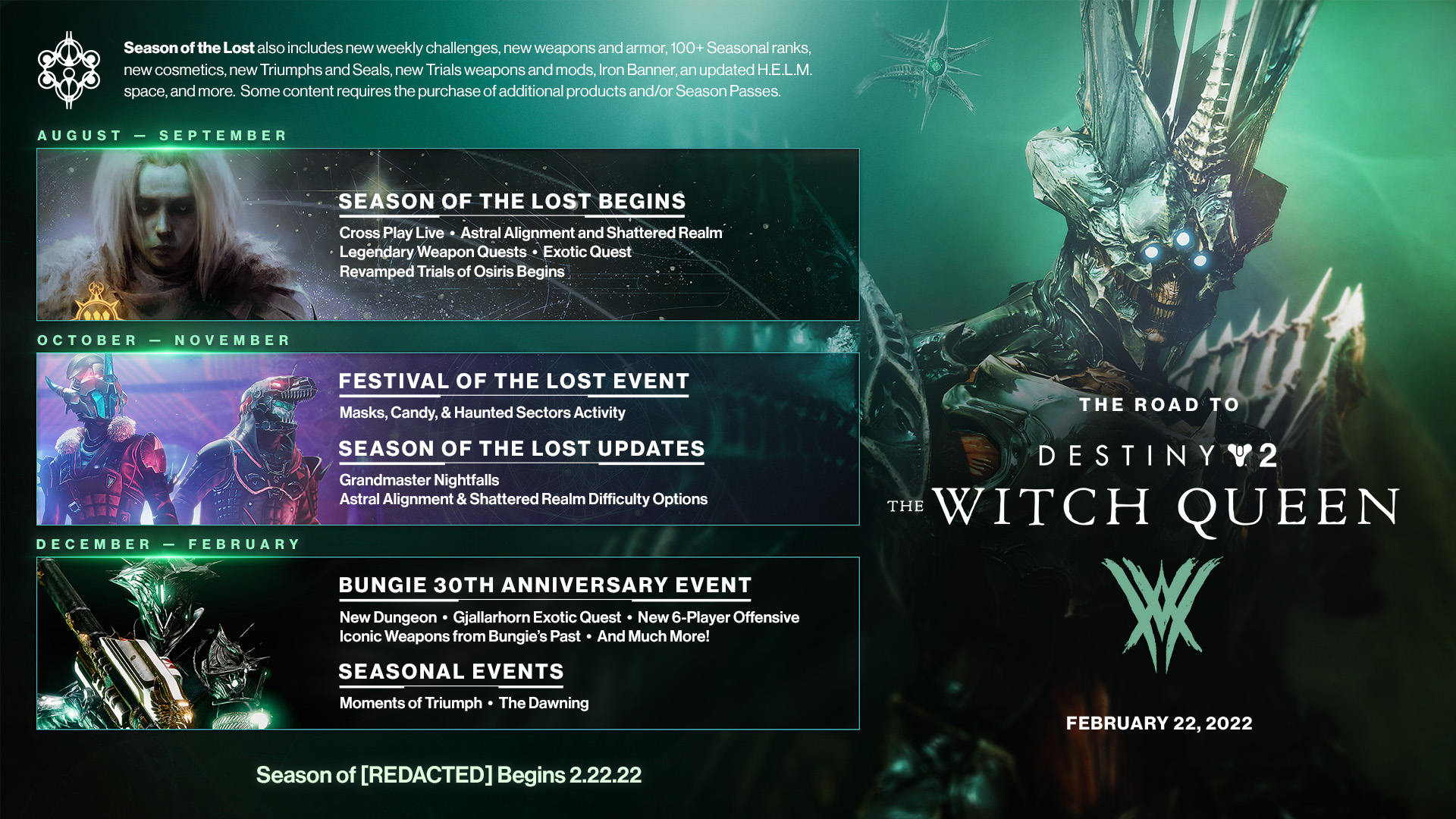 Line for the Lighthouse

Last week, Trials of Osiris returned after a mini-hiatus for the first few weeks of the Season. We made a lot of changes to the mode and have been eagerly waiting to see your reaction. Judging by the data and the feedback, it looks like you are enjoying the changes overall.
Here are a few stats from the first weekend:
Historical:
Here is a look at a graph showing the historical data of player count over time to give you an idea of just how impactful this past weekend was. 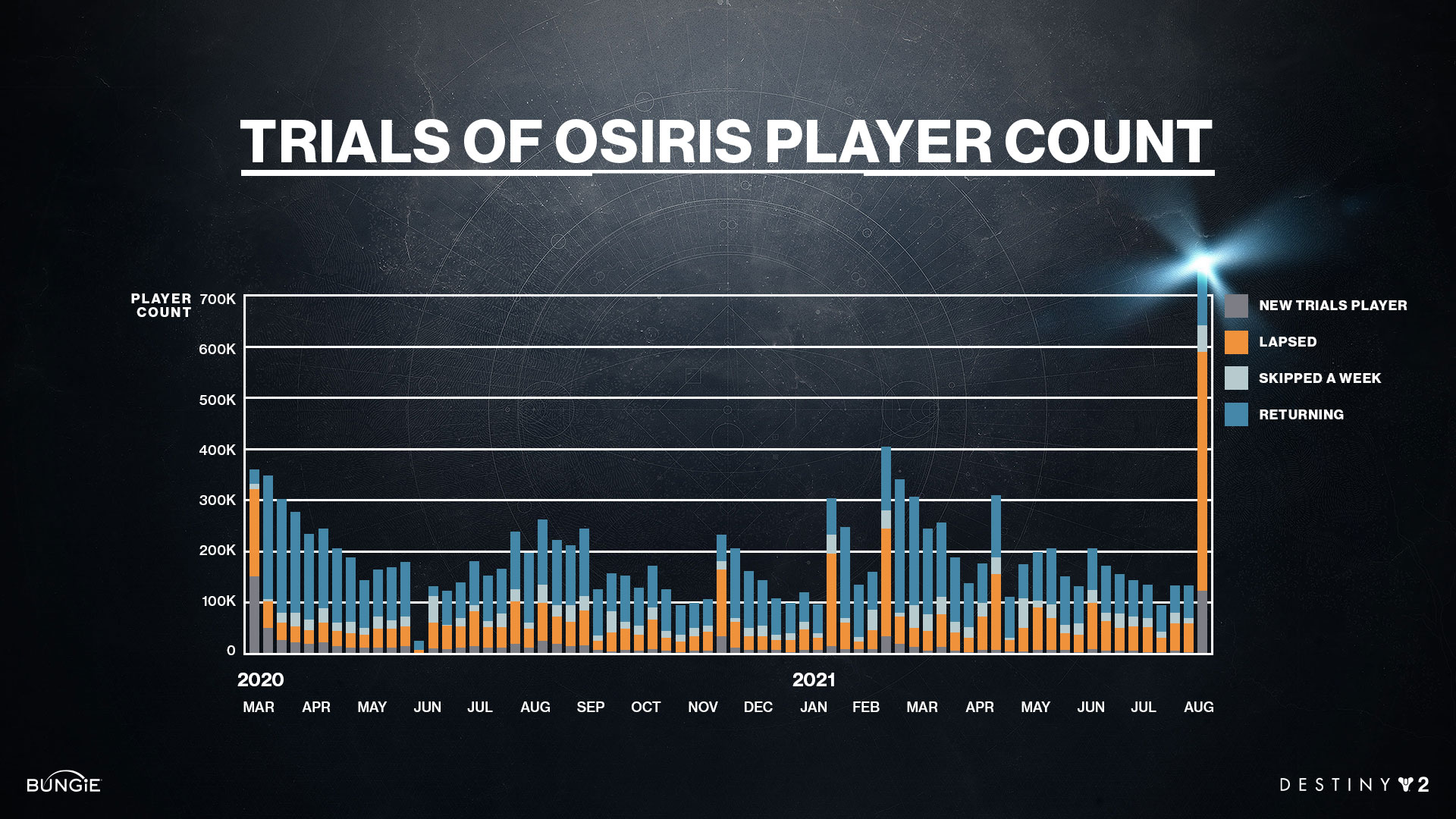 Early impressions aside, we aren’t popping the champaign bottles and taking a victory lap yet. We’re extremely happy with how the first weekend went, but we know there’s always room for improvement. In fact, we already have some changes planned. Keep reading to find out more.

Tomorrow, there will be a few changes going live for the second week of Trials of Osiris.
We aren’t satisfied with the matchmaking experience for players after seven wins. That area of matchmaking has a significantly higher rate of 5-0 games than we would like, so we are enabling a ‘flawless matchmaking’ pool. However, we want to make sure that there are enough flawless players to maintain good matchmaking times – so we are waiting until Friday afternoon to turn this on, and we will be watching player reactions and matchmaking analytics all weekend to make sure it is behaving properly.
We are also not happy with the experience of players who have a bad streak of getting repeatedly thrashed 5-0, so we are enabling some matchmaking help if someone runs into several blowout matches. This temporary help mechanic clears up once they start winning again, so don’t think someone will cheese a flawless by tanking for a few games and then have a weekend of smooth sailing.
Lastly, we are enabling the quitter penalties that we use on the Glory playlists – giving you a 30-minute timeout if you quit out of too many games. We are going to be watching this, and have some harsher plans if players continue to abandon their fireteams.
Next week, in addition to our first Trials Labs (spoiler alert: It’s Capture Zone Trials!), we will be disabling the Special ammo replenishment on revive – you still get special ammo if you kill someone, or when you start the next round. We are also disabling the matchmaking counter on the Trials of Osiris lobby, so you won’t be able to tell how many players have joined but will still be told when they join. We also fixed an issue preventing you from being able to Masterwork weapons from Saint-14’s rank rewards.
Big thanks to everyone who showed up to play last weekend. From the hardcore flawless-or-bust players to anyone who tried out the mode for the first time, all of your feedback and data from playing has been extremely helpful in allowing us to continue improving Trials. Good luck tomorrow!

Another hotfix went live today. Player Support has the latest on what fixes have gone out and what known issues we are still tracking.
This is their report.

Earlier today, September 16, Hotfix 3.3.0.2 was released to all players. Below are some of the issues resolved with this hotfix:

Earlier this week, we changed the Bungie Names of an additional 700 players whose Bungie Name violated our Code of Conduct. Players affected by this change will have their names set to “Guardian.”
We will continue to investigate and change Bungie Names for those names that try to skirt the line or that we feel should be actioned upon. The option for players to change their own Bungie Names will become available in a future update.
If players see a name that they feel should be removed, please report them in-game or in your Recent Games History on Bungie.net.

On Thursday, September 23, extended downtime for Destiny 2 is scheduled in preparation for Destiny 2 Hotfix 3.3.0.3. Players will be removed from activities at 5 AM (1200 UTC) and be unable to log in until 10 AM (1700 UTC). Please note that times may be subject to change during this maintenance period.

Alright let's get down to it. Every week we take a gander at the community and see what cool videos you all have been cooking up. Then we pick a few we like and plop ‘em up here for the world to see. This week we have a couple of one-minute speed runs for you.
Movie of the Week: Perdition Legend - 0:57 Warlock Platinum Speed run

Did we mention the creators of the winning videos get an emblem? Well, they do. So, if that’s you, make sure you leave a link to your Bungie.net profile in the description of the video so we can send you your special emblem.

One of my favorite biweekly rituals is getting to browse through community art and select a few to show off here. With Dmg out of the office, his meddling won’t get in the way of my impeccable taste, and I get the honor of making the picks for the next few weeks. Not alone, of course. There are several aesthetes here at Bungie who help curate our selections.
Art of the Week: Love Birds

Don't mind me, just sliding some of my lovebirds fanart in here~ 🌈#O14 pic.twitter.com/nGkDEQdwpQ

Art of the Week: Vibing

As always, if you see your art here, please make a quick reply to your original post with a link to your Bungie.net profile. This will let us know where to send your special emblem.
Before we go, we wanted to share a few more stats with you. Some of these are Destiny lifetime stats, some of them are what you have managed to accumulate in just the last year of playing, but all are a testament to your dedication.
Destiny Lifetime:
In the last Year:
How fast do you think you can lift that number up to an even 10 billion hours (about 1,100,000 years) played? Just please remember to take breaks and drink plenty of water.
<3 Cozmo