Apr 1, 2021 - Cozmo_BNG
This week at Bungie, we have modifications on our mind.
Guardians are further proving their worth as Proving Grounds has become the featured Nightfall strike. We’ve also added it to the Vanguard strike playlist so all players will now have a chance to tackle the giant tank on Nessus. So, if you haven’t had a chance to log in this week, it’s a great time to load up the game. If you’ve been playing, you’re probably waiting for me to tell you something you don’t already know, so let’s get to it.

With the return of Ada-1 to the Tower in Season 14, we are introducing some small quality of life upgrades to a couple of our Tower vendors. First, in addition to being the primary vendor associated with the upcoming transmog system also known as Armor Synthesis, Ada-1 will become the vendor who delivers a variety of armor-focused items and upgrades. Each day, Ada-1 will now sell one randomly chosen armor mod from the general and armor slot (Helmet, Gauntlets, etc.) groups, and one randomly chosen Combat Style armor mod (chosen from the Charged with Light and Warmind Cell mod groups), which should make it easier for players who missed these in the past to get their hands on some of the armor mods from Year 3.
Additionally, on a weekly basis, Ada-1 will sell one armor set randomly chosen from the World Loot Pool, with a stat roll that also changes on a weekly basis. Finally, Ada-1 will also sell armor upgrade materials (Upgrade Modules, Enhancement Prisms, and Ascendant Shards) in the same way that the Banshee-44 does right now.
With Ada-1 taking on armor responsibilities, Banshee-44 is getting a few revisions to his inventory as well. The Gunsmith will no longer sell armor mods, but will retain the rest of the items that he currently sells. Additionally, on a weekly basis, Banshee-44 will sell a selection of six weapons, randomly chosen from the weapons in the World Loot Pool (two weapons each from the Kinetic, Energy, and Power slots) with perk rolls on each weapon that are randomly determined at the start of the week. So, at each weekly reset when you log in, you can head to the Tower and see what the Gunsmith is selling, and maybe pick up a weapon you’ve been looking for with a roll you are excited to use.

We have received some feedback on perks like Celerity and Bottomless Grief from players asking that they be added as intrinsic bonuses to Adept weapons. Weapons Feature Lead Chris Proctor is here to share some of our philosophy on these perks and a few changes we are planning.

Chris Proctor: When we launched Trials of Osiris, we made a new origin-specific perk for Trials weapons: Celerity. This is a wildly powerful perk (+100 aim assist, handling, and reload – plus reduced recoil and spread – this perk is nothing to sneeze at.) with very low uptime.
We intended this to be great for clutch "last Guardian standing" plays in Trials specifically. And when it's active it IS very strong, but we found that a trigger condition that relies on failure generally feels pretty bad, and the power it grants doesn't negate that feeling. Players never like betting against themselves or their teams. Not only that, but the perk is useless outside of Trials (and a couple of other activities).
Sidenote: The Deep Stone Crypt origin perks were well-received, so while Celerity specifically didn't hit the mark, the idea still has legs.
In Beyond Light we introduced Adept weapons to Trials, wanting to try out a new system for aspirational weapons in a small set before rolling them out more broadly. We had three goals for Adept weapons:
We've seen all of your suggestions to make Celerity and Bottomless Grief intrinsic to Trials and Nightfall weapons, or only to the Adept versions, and I wanted to touch on this idea.
Thematically this is a cool idea, and adds to the flavor that these perks can give their sources, but there are three problems:
In Season 14, we're making the following changes to Trials and Nightfall weapons, and their Adept versions (Note: This only applies to new drops of these weapons, not previous drops.):
Moving forward, we're not done with origin perks, and hope to have something that better achieves our goals in a future release. 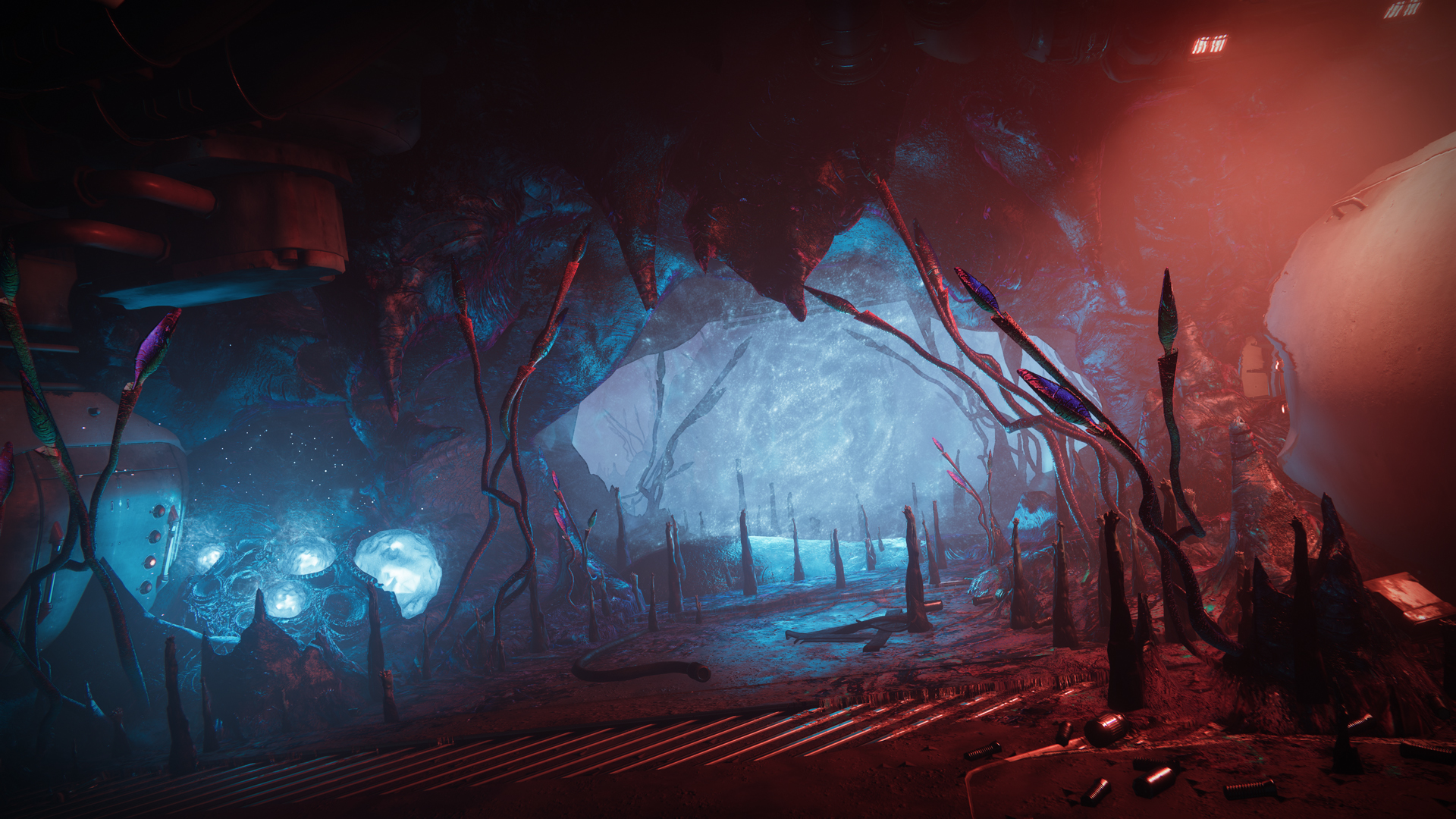 Next week, we are going to be firing up the stream machine again. We had a lot of fun last month when we featured a deeper look into the Deep Stone Crypt. If you still haven’t gotten a chance to check it out, you can watch the replay here!
This time, we plan on giving you a live presentation of the Presage Exotic Mission that went live earlier this Season. We have lined up representatives from several of the teams that worked to create this experience and are ready to share some behind-the-scenes stories.
If you enjoyed the experience of exploring a spooky derelict ship and want to learn more about what it was like to put together, join us next week!
We’d also love to hear what questions you have for the development team, so sound off here with anything that you’ve been wondering about and we’ll get in as many questions as possible!

AFTER ALL, IT’S A DUNGEON CRAWL

We just put out another Hotfix today. Our Player Support Team has the latest on what was addressed and what known issues are still being tracked.
This is their report.

Earlier this week, the Proving Grounds strike entered the Nightfall playlist. When the Season began, we revealed our Seasonal calendar which showed that on March 30th the Proving Grounds strike would enter the Vanguard Strikes playlist for all players.
We failed to acknowledge on the calendar that Beyond Light and the Season Pass would be required to play the Nightfall version of Proving Grounds. All Nightfalls require ownership of their associated expansion to access, with examples for previous expansion-gated Nightfalls versus free Nightfalls below:
We're working with our teams to update the Season of the Chosen calendar and future calendars to better reflect this distinction.

With the launch of Patch 3.1.1, it was discovered that player’s Guardian Games Ghost Shells were being replaced with other Ghost Shells, and would disappear when equipped. This issue is now resolved.
To address any lost currencies resulting from this issue, players will be granted a Masterworked version of each of the Rival Guardian Games Ghost Shells currently unlocked in their collections.
Players with full Ghost Shell inventories will have their Shells sent to the Postmaster and should pick them up before they get pushed out by other items and are no longer available.

I Can Do This All Day

Alright, let’s go over this one more time. This is the section of the TWAB where we pick our favorite UGC. That’s user generated content, which is just a fancy term for cool stuff made by the community. Now, you might be asking, “Cozmo, what do I get for making a cool video that gets featured in the TWAB?” I’m glad you asked. Everyone featured here will receive a special emblem in game to show off their cinematography skills. Let’s see who won this week.
Movie of the Week: 8-bit Lullaby
Movie of the Week: The Man With The Golden Gun

Apple of our Eye

Movies aren’t the only form of art we like to feature around here. We also have a strong appreciation for non-moving pictures. Just like with the MOTW above, all artists who appear in our gallery will receive a special emblem. Here are favorite pieces for this week.
Art of the Week: Eris Morn

Art of the Week: Bahto and Katabasis

We don’t got no April Fools jokes for you. It’s a fairly light TWAB this week anyway so padding it out with some fake story about how Master Rahool is getting his own record deal didn’t feel right... ok, now that I just typed that, it actually sounds hilarious. Sorry we didn’t think of it sooner.
Have fun hunting your own personal Palindrome random roll this week.
<3 Cozmo