Oct 22, 2020 - A_dmg04
This week at Bungie, we talk story and sandbox.
Before we kick this TWAB off, I have to ask: Have you watched the new story trailer for Beyond Light yet? No? While we aren’t going to dive deeply into spoiler territory between now and launch, this is the moment where we say it’s time for you to go dark if you're looking to experience the expansion with no knowledge of what's coming.
If you’re hungry, it’s time to dig in.

Eramis is on the warpath. Variks warns of catastrophe. The Exo Stranger has been waiting for you. A few extra details can be found on the Beyond Light: Story page on Bungie.net. Jump in if you’d like to know more.
Soon, you’ll be exploring Europa, in search of answers. Whether you be a lone wolf or part of a fireteam, we’ll leave that path for you to walk.

Two weeks ago, we began a conversation about sandbox tuning for Beyond Light. Armor modifications are getting some hefty changes, from reloads to raids. If you missed it, check out the October 8 TWAB. This week, our focus shifts to the weapons in your arsenal. As with our mods preview, we have a collection of patch notes accompanied by developer commentary. Alright, we ready?
Let’s pass the microphone over to the Dev Team for some juicy details.

Dev team: Hello! Today, we’ll be covering some changes to a few specific weapons and weapon families. For those of you who don’t have much knowledge of our sandbox, each weapon has a specific “frame” that is also tied to its associated rate of fire (RoF). We’ve included both of these for a bit of clarity, as many players default to RoF when talking about various weapons. As an example, “Aggressive” Hand Cannons currently have a RoF of 110 rounds per minute.
Hand Cannons: We're making changes to give hand cannon subfamilies more diversity, and more reasons to use each.

At this time, Lightweight (150 ROF) Hand Cannons represent the majority of Hand Cannon usage in the Crucible. While we experimented with many different ways to even out Lightweights (150 ROF) and Adaptives (140 ROF), Lightweight Hand Cannons consistently retained a faster time to kill (TTK). As such, we opted to equalize their ROF.
We selected 140 ROF as it is fairly balanced in the Crucible sandbox. It gives other weapon archetypes more time to breath between shots, avoids an overabundance of Hand Cannons with faster TTK than other weapons, and pairs nicely with upcoming changes to 600 ROF Auto Rifles (more on that below).

Sniper Rifles: We want Sniper Rifles to feel powerful, without being so easy to use that they dominate.

Auto Rifles: In Season of the Worthy, the Adaptive archetype (600 RoF) was given a buff. We’re pulling that back a little to keep it in check with other Auto Rifle archetypes.

Scout Rifles: Scouts have a reasonable time to kill (TTK)and can't be adjusted too much without making them dominate the battlefield, so we're making them a little easier to use.

Rocket Launchers: These Heavy weapons currently have very low reserves, so we're adjusting that. We expect to take another look at Rocket Launchers in a future Season.

General: The following is a list of surgical changes for select weapons based on player feedback. Some of these changes apply to weapons that are a little too far ahead of other options while others apply small buffs to increase the weapon's effectiveness.

Some of these changes look pretty hefty, and we’re looking forward to seeing your reactions. When first hearing that Aggressive Hand Cannons would be shifted to120 RPM, I wondered if it would be enough to push them into the hands of my Guardian. I can safely say after quite a few playtests, I have a bunch of new favorite Hand Cannons that have been waiting for their time to shine.
Now, let’s look to some new hotness coming soon to a Lighthouse near you.

Before we let our friends on the Development Team go, we have a few more details concerning weapons to share with you. A few months back, we announced the return of Adept weapons to the Trials experience. Today, we’ll be spending some time getting you reacquainted with these tools of destruction, and how we’re laying the groundwork for future Adept weaponry. While these weapons are similar in name to the Adepts of Destiny 1, there are some added elements to embrace the weapon systems of Destiny 2. With that, we pass the mic back to the Development Team to give you a full rundown:

Dev Team: Beginning in Beyond Light, all existing Trials weapons have Adept versions. Our intent is for all new Trials weapons to have an Adept version in the future, with their infusion caps matching the Season they were introduced in. For our first round of Adepts, their infusion caps will be set to that of Season of the Worthy. Additionally, we will be introducing Adept weapon mods into the sandbox in Beyond Light, which can only be applied to Adept weaponry.
Adept Weapons 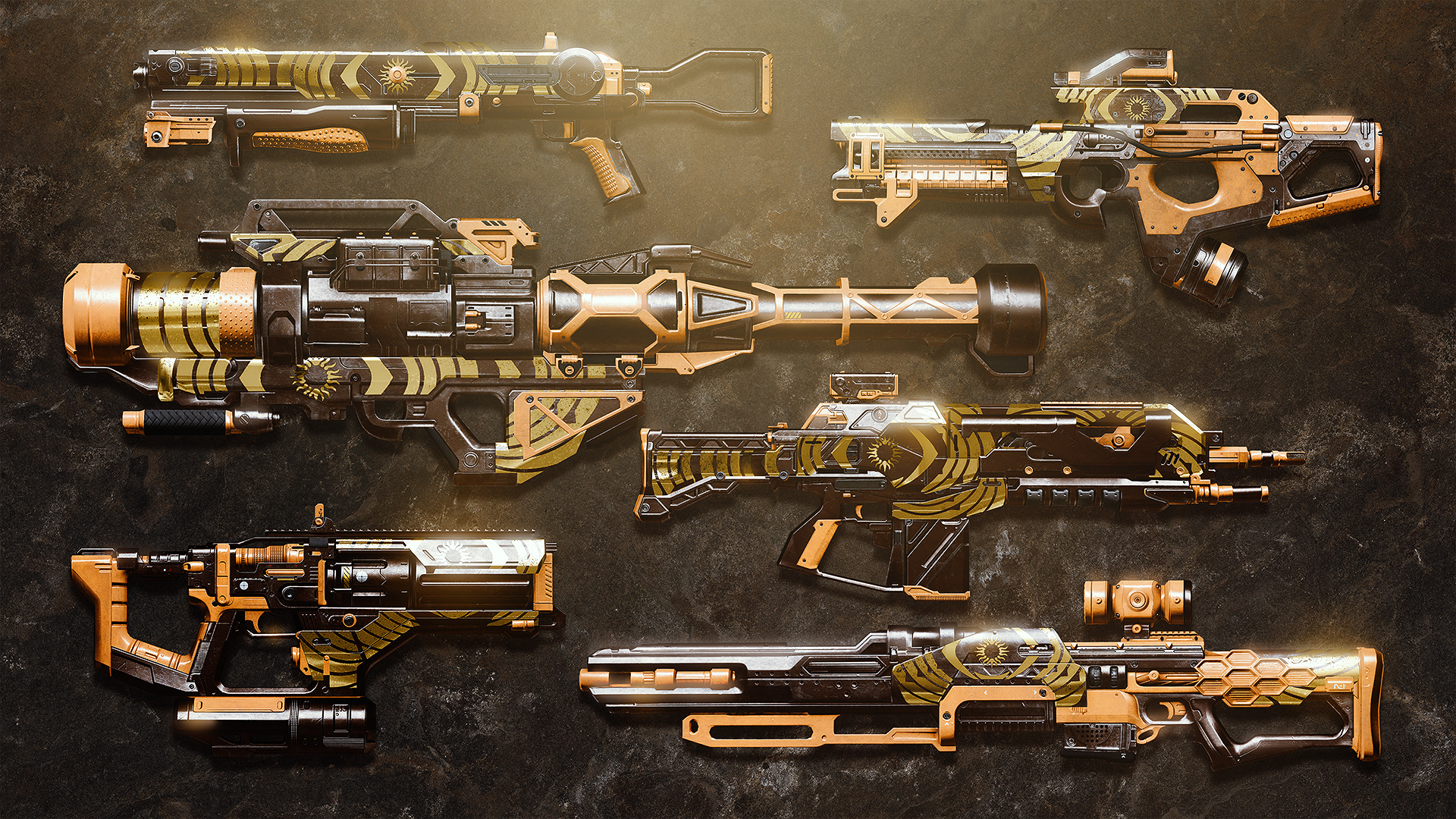 Acquisition
To earn Adept weapons and Adept weapon mods, players must complete a Flawless Trials Passage and open the Flawless chest at the Lighthouse.

As you can see, for those who reach the Lighthouse, your loot is about to get a little more spicy. While Adept rewards are coming first, we also have a Trials armor refresh planned for a future Season, after the stardust has settled from Beyond Light.
With that, we come to an end to our sandbox previews leading up to Beyond Light. Some of you may be asking, “Wait a minute, what about abilities?” In three short weeks, the abilities you’ve come to know and master will be challenged by the Darkness. Stasis will make its debut, bringing a new flavor of combat to the sandbox. The team will be watching closely as you embark on your first strikes, Gambit matches, and Crucible exercises to see how your abilities stack up against each other. It’s going to be a wild time, and we’re excited to see the Light clash with the Dark.

This week saw another update to our Prime rewards. If you have a Prime account, make sure it’s linked with your Bungie.net account! Once you’ve done that, head over to the Prime Gaming portal to redeem some sweet cosmetic rewards. Say hello to the Cryptomnesia Sparrow, making its debut through this month’s Prime drop! 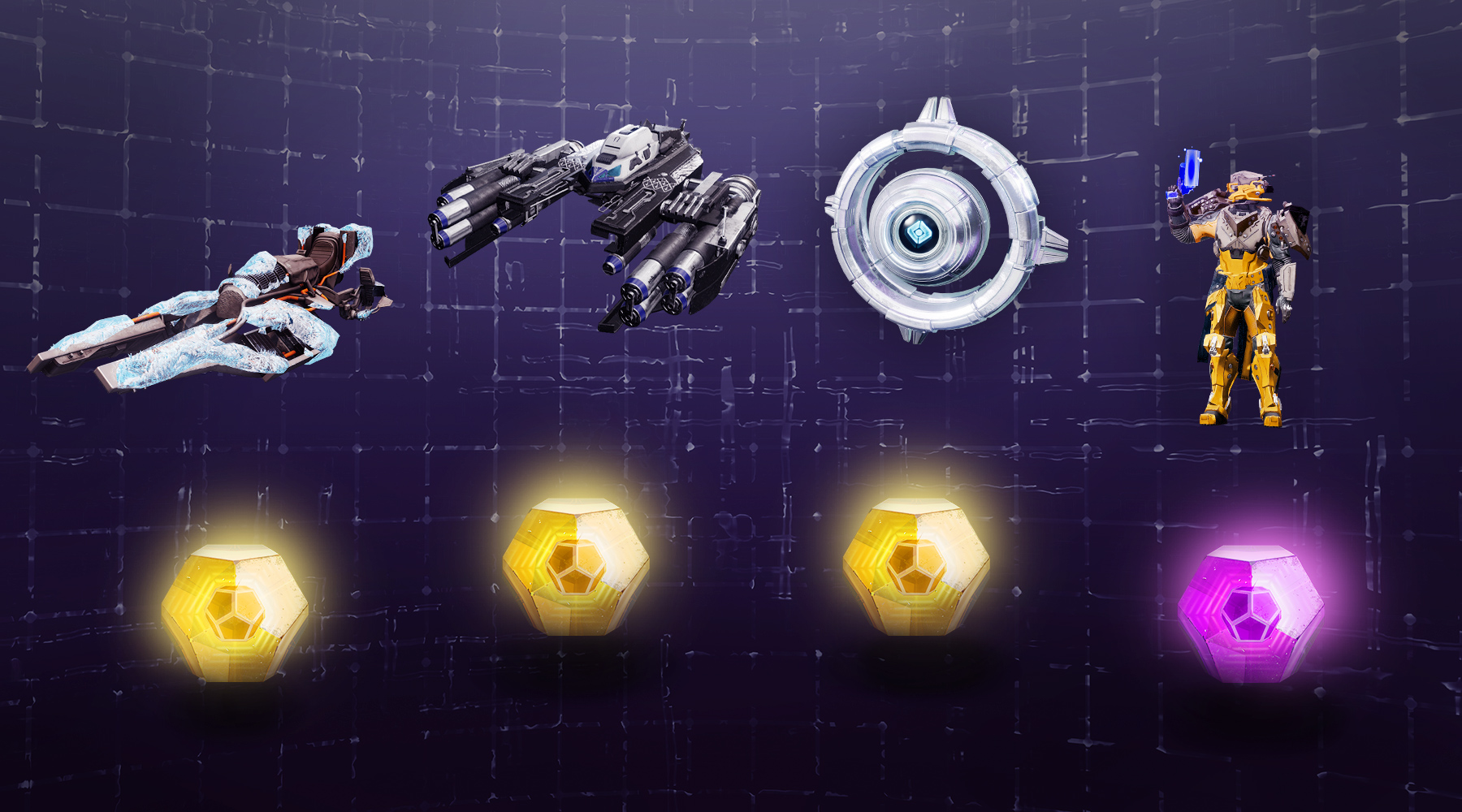 Rewards:
Once redeemed, you’ll find these at Amanda Holliday in the Tower’s hangar. Stay tuned for future updates!

Festival of the Lost has reached its halfway mark, and Destiny Player Support is keeping an eye out for scary bugs as we approach the final days of the event. While no major issues have been found, we do have a few reminders on items to complete, and a note on the Interference: Loop Triumph.
This is their report.

INTERFERENCE: LOOP TRIUMPH
Due to the extension of Season of Arrivals, the Nokris encounter for the Interference weekly quest will remain for the remainder of the season. This means players who have missed a previous Interference encounter will be unable to access those encounters and will be unable to claim the “Interference: Loop” triumph.
TITLES
With the start of Year 4 on November 10, certain Seals and their associated Titles will no longer be available to earn. Players will need to be sure to unlock and equip the following Titles before this date to guarantee that the completions are recorded on their accounts:

For more info on Legacy Titles and Seals players should view our Year 4 Triumphs Update Help article.
KNOWN ISSUES
While we continue investigating various known issues, here is a list of the latest issues that were reported to us in our #Help Forum:

I’ve been combing the internet, looking for spooky movies to watch during a Halloween marathon. While watching my own clips from the Crucible can be scary (how can someone be that bad!?), I’m looking for things that are slow burn. Half the movie spent setting the world up, introducing you to characters, then BAM. Weird stuff happening. Lights going out. Doors being mysteriously locked. People turning on each other while trying to do simple tasks to get the space station running. Mentions of suspicious behavior. Vents. Garbage disposals. That weird thing where you have to tap a button while disks spin.
Wait, that’s not a movie… ah well. Let’s get back on topic. While these movies aren’t so scary, they are entertaining! Let’s check out who won MOTW.
MOTW: Kingdom Come

MOTW: Most of you are too young to understand this reference

For every movie you see listed here, there’s at least one emblem being granted to those who created them. Want a shot at a sweet emblem? Submit your movie to the Creations page on Bungie.net. We have an expert panel of casual movie watchers selecting things at complete random to win!
I mean, Cozmo and I watch movies and feature the ones that look fun, cool, unique, or otherwise silly. Sometimes people send us emails with cool videos too. Either way, take a shot!
The days are continuing to grow shorter here in Seattle. Pretty soon, Destiny won’t be the only thing enveloped in Darkness. I for one can’t wait. Only two more TWABs stand between you and Europa.
Ah, and before we go – we've been seeing a lot of questions in the wild on how bounties, currencies, and progression systems will be updated in Beyond Light. We’re currently working to get the info together and making sure everything is factual. This isn’t a “preppers guide to the galaxy,” mind you. Just a heads up on how these systems are changing. Our current plan is to cover those topics next week! The most frequent question we’re seeing right now concerns bounties, and whether they’ll be cleared at the start of next Season.
Most of your bounties will stay intact, but any bounties tied to specific Seasonal activities or content entering the DCV will be removed on November 10. Examples would include Black Armory, Gambit Prime, or Festival of the Lost bounties. Additionally, any bounties that grant progression towards Infamy/Valor may negatively impact your powerful rewards, as they will be limited to Season of Arrivals Power Levels. Our recommendation is to go ahead and claim your bounties, just to make sure you don’t miss out on any XP or Glimmer.
More to come next week. See you then.
Cheers,
-dmg04