Jul 16, 2020 - A_dmg04
This week at Bungie, we are extending Season of Arrivals.
The launch date for our next expansion, Destiny 2: Beyond Light, has been moved to November 10, 2020. If you missed the full announcement, you can check it out here. We’ll wait until you’ve given it a read…
… Up to speed? While we’re sad to keep the secrets of Europa under wraps for a few extra weeks, our dev team is putting in the work to deliver an adventure that is worthy of your bravery. Doing that work from our homes finds us very far away from our usual ideal of working together in a studio – currently still quarantined. So we’re taking the time we need to do it right under the most challenging of conditions.
With the extra time between September and November, we have some plans to make the most of the suddenly longer Season. 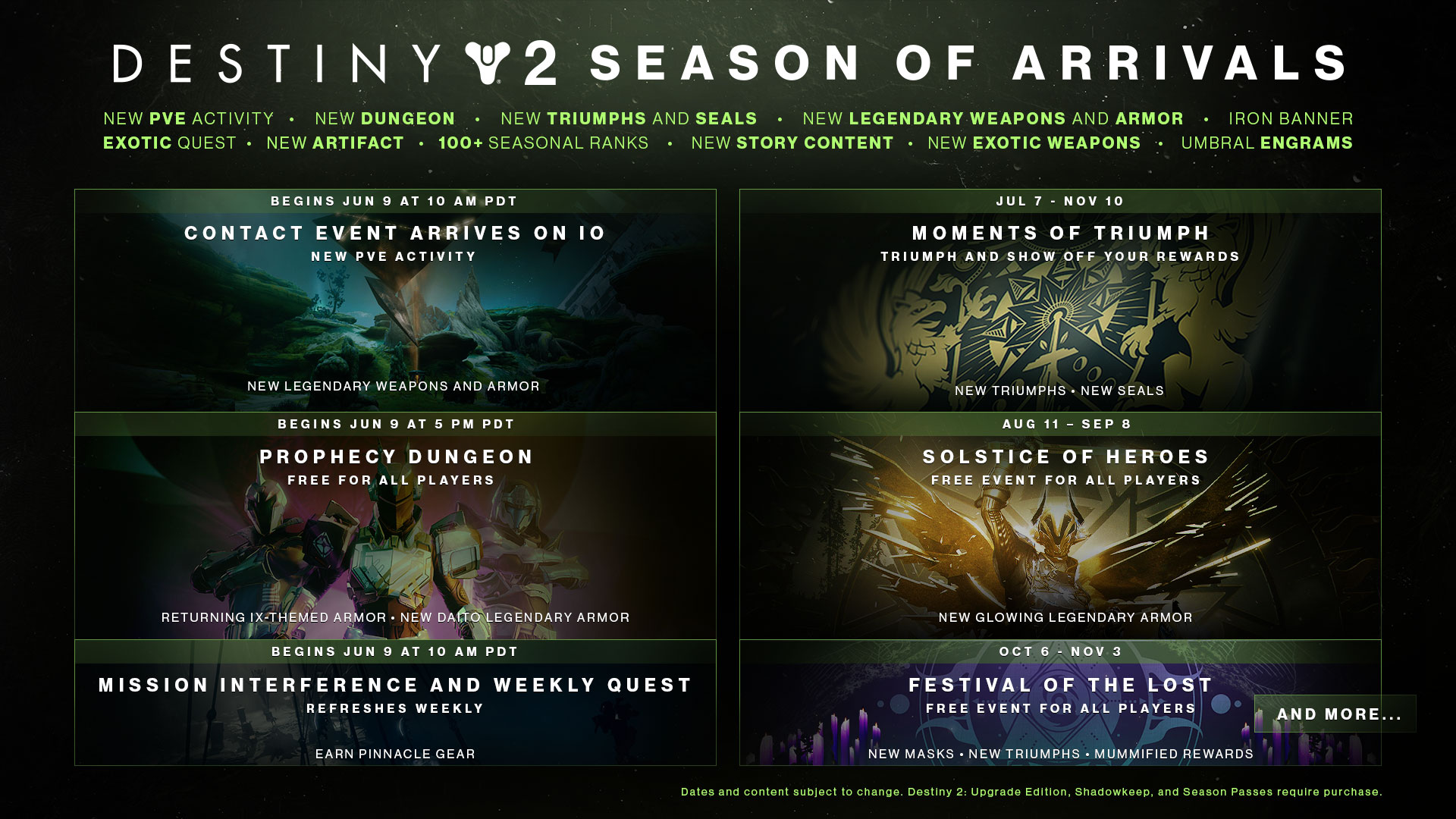 We know that no amount of extra Infamy or Valor will keep your hunger satiated, but we will have a few more surprises to share on the road to launch. Stay tuned.
In the meantime, the pages that appeared on the day we revealed Beyond Light have been updated with all of the new and relevant information. Bookmark ‘em or pass ‘em along to your friends. Some in-game UI elements will not reflect the new launch date until a future update.

Maybe We Are Conquerors

Contrary to what Zavala believes, many among you became Conquerors last Season with the introduction of Grandmaster difficulty Nightfalls. Even though we turned the challenge up to 11, you were able to smash through the ranks of enemy combatants and earn your prize.
While this Season will follow the same flow, completing all available Nightfalls on Grandmaster difficulty to earn the Conqueror title, we made some adjustments to activity rewards to make things feel a bit more fruitful.
As a refresher, here are some patch notes from Destiny 2 Update 2.9.0:
So, if you’re on the hunt for that perfectly rolled Exotic armor piece, or if you’re trying to fully masterwork as many armor pieces as possible, it’s almost time to put your skills to the test. Slay the Darkness, claim your loot.
Grandmaster difficulty becomes available on Tuesday, July 21, at 10 AM PT.

Last week was pretty crazy. Bungie Day brought an update to Destiny 2, unlocking a new Exotic quest, new Umbral Engrams, and more. Five raids also entered “featured” status, losing their weekly loot lockouts. In other words, players can play the featured raids multiple times a week to grind out high-stat armor and raid Exotics that they may not have earned yet! If you’ve been taking a swing at the Moments of Triumph objectives this year, you may have also noticed that the Contender’s Ghost Shell from Prestige Leviathan has become available through a Triumph.
In the last few days, an issue came to light that the Contender’s Shell perks also lost their loot lockouts. Combined with some raid encounters that could be completed in under five minutes, this led to an incredibly quick way to earn Bright Engrams, which further increased Legendary Shard and Glimmer earn rates.
As such, the Seeker of Brilliance perk has been temporarily disabled. Our current goal is to have a hotfix in early August that adds the weekly lockout back to this specific perk. Once we have more information on an expected patch date, we’ll let you know via @BungieHelp on Twitter.
As a note, the Seeker of Opulence perk remains active. If you’re looking to round out your Exotic collections or earn better rolls on Exotic armor, equip this Ghost Shell before jumping into Leviathan raids!

Earlier this week, Destiny 2 Hotfix 2.9.1.1 was released, addressing a collection of issues that impacted controller inputs and general gameplay. The Player Support team has a quick list of high-frequency issues that were resolved, and a collection of other bugs that we’re tracking.
This is their report.

BEYOND LIGHT RELEASE DATE
As announced previously, the new release date for Beyond Light will be November 10, 2020. With this change, the end dates for Season of the Arrivals and Moments of Triumph have also been moved to November 10, 2020 at the weekly reset. The implementation of related systems, such as the moving of certain activities to the Destiny Content Vault and the effect of Max Power Level through Infusion, have also been pushed back.
RESOLVED ISSUES
On Tuesday, July 14, we released Hotfix 2.9.1.1. to players. This hotfix included the following resolved issues:

A few weeks back, I challenged Cozmo to write better headlines for the Movie of the Week section. His answer? “Plays Adapted For Movies.”
This was an obvious reference to our favorite musical recently hitting a streaming service, but I still think he could do better. Now that I’ve gotten that off my chest, let’s get to watching some Space Magic Movie Magic.
Movie of the Week: Come on and SLAM.

Honorable Mention: Is this how you UwU?

If you’re looking to score a Movie of the Week emblem, make sure to submit your movie to the Creations page on Bungie.net. Throw a link to your Bungie.net profile in the description, and we’ll shoot you an emblem for your troubles if you’re creation is chosen.
A major announcement like the one we dropped today creates new questions. We know you also want answers to some of the other questions you’ve been asking since the original reveal of Beyond Light.
Those answers were hard to come by in recent weeks while we refactored our deadlines and development cycles. The good news is that now we have more time to tell you everything you need to know about how this expansion will change Destiny 2. In the weeks and months to come, we’ll share all the information you need to plan your game time leading up to November 10.
Much love,
-dmg04