Feb 6, 2020 - A_dmg04
This Week at Bungie, we’re calling in reservations.
It’s been a wild week in Destiny 2. Inotam, Oblivion’s Triune, made their grand entrance into the Sundial. Guardians descended upon Mercury, weapons in hand, eager to protect the timeline from certain annihilation. While you’ve prevented the Psions from changing history, this isn’t the last trial you’ll face - not by a longshot. 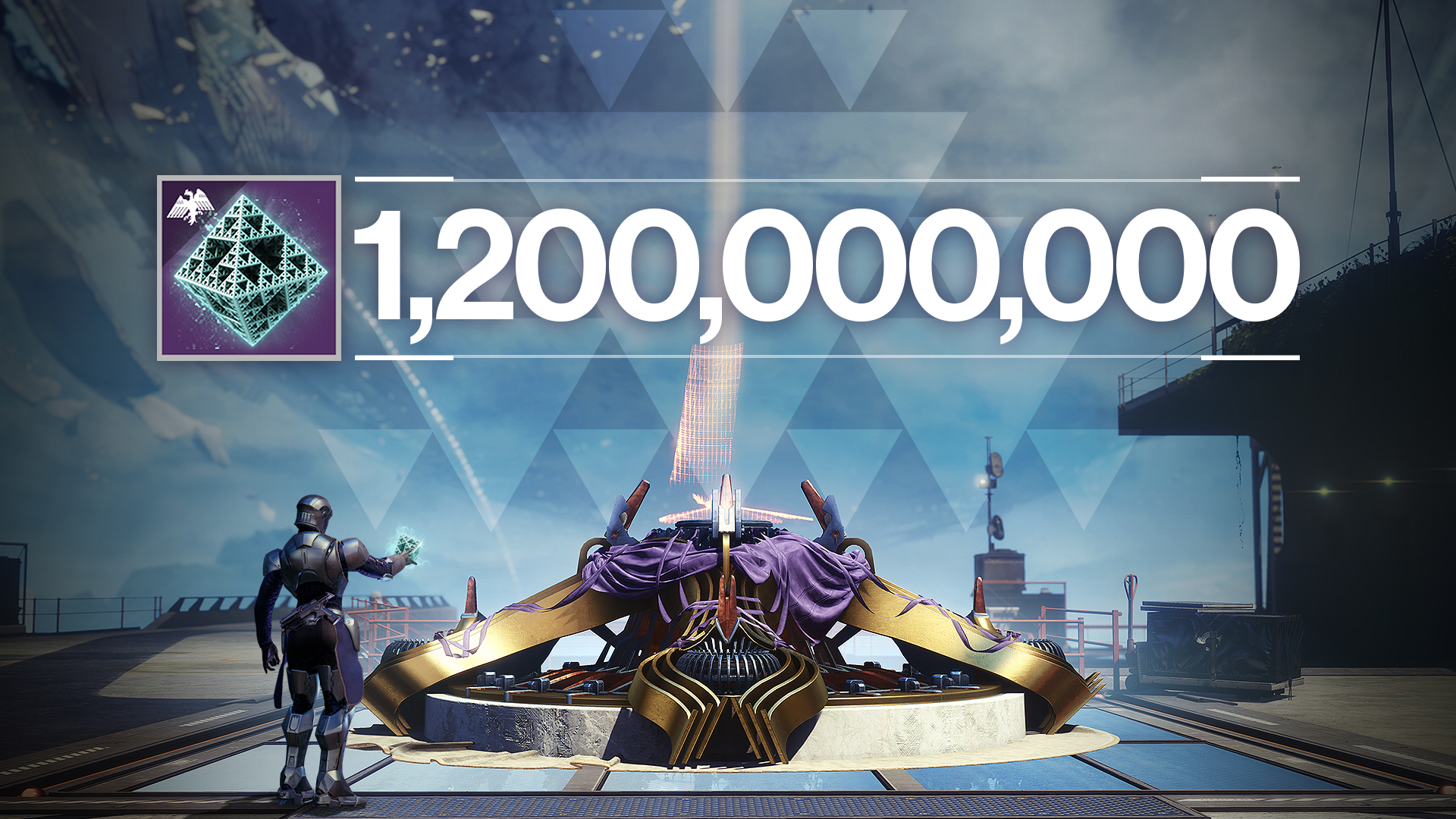 The first three Empyrean Foundation goals have been met with haste. One billion Fractaline isn’t enough for the Foundation, and the next goal is currently in reach. Your next stop: 2.2 Billion Fractaline donations.
We knew you’d rise to the challenge, but this? This is absolutely insane. Keep that Fractaline coming. We’re seeing quite a few Guardians investing in their Fractaline futures, but many hitting the donation button to quickly earn some sweet Timelost weapons.
The final triumph for the Savior Seal will be completed once the community completes the seventh stage of this event. We’re excited to see a new title in the wild. Players will also unlock the ability to pre-order the Savior Bungie Reward pin once they have completed all Triumphs for the Seal.

Now, let’s look at the calendar. We have some beats to cover that are coming up quick, with a new Season on the way in just over a month! Below, you’ll find details on Crimson Days, Destiny 2 Hotfix 2.7.1.1, and a patch note preview for Season 10.

Love is almost in the air

Have you been feeling a bit lonely lately? Lacking a partner by your side in the heat of battle? Crimson Days is on approach, bringing the perfect opportunity for you to form an unbreakable Crimson Bond with a fellow Guardian.

Crimson Doubles returns to the Crucible during the event, bringing explosive 2v2 combat to the fold. Stay close to your partner: you’ll each have heightened ability regen as long as you retain your Crimson Bond. If you stray too far away from each other, opponents will be able to see your every move. If you’d rather take your partner out for a stroll in one of Destiny 2’s PvE activities, Shaxx will offer bounties for you to complete in a two-person fireteam.
As you complete Crimson Doubles matches and bounties, you and your partner will be showered in delicious candy hearts. To sweeten the deal, Daily and Weekly bounties will offer double XP. Bright Dust will also be rewarded when completing your weekly bounties.
As you begin to stockpile Confectionary Hearts, they can be exchanged with Lord Shaxx for Crimson Days themed rewards, including two new Exotic Sparrows. Ride in tandem to show the strength of your Crimson Bond! 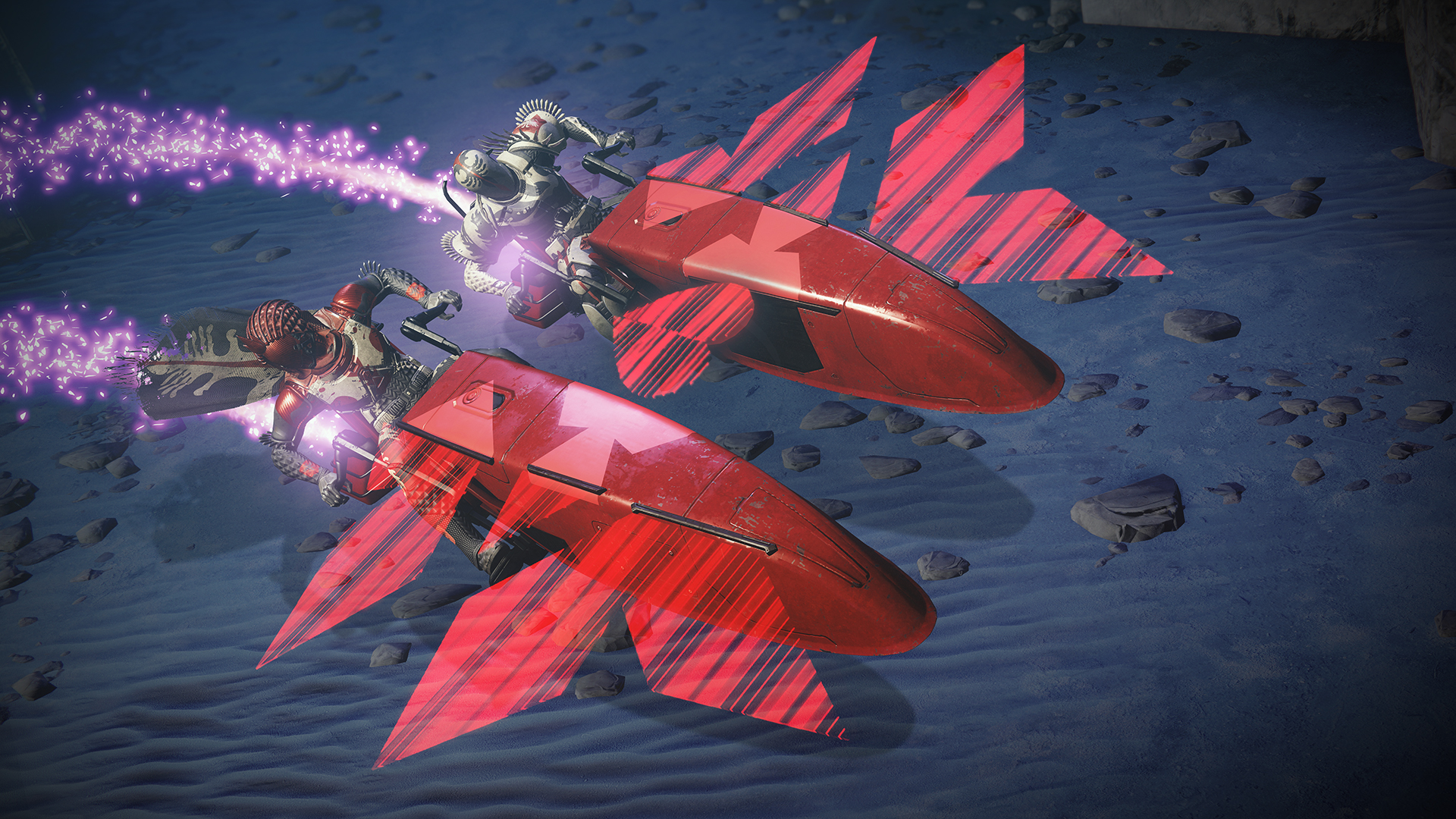 If this is your first Crimson Days event, or you didn't earn enough hearts in years past, rewards from previous events will also be available to earn alongside the new Sparrows. 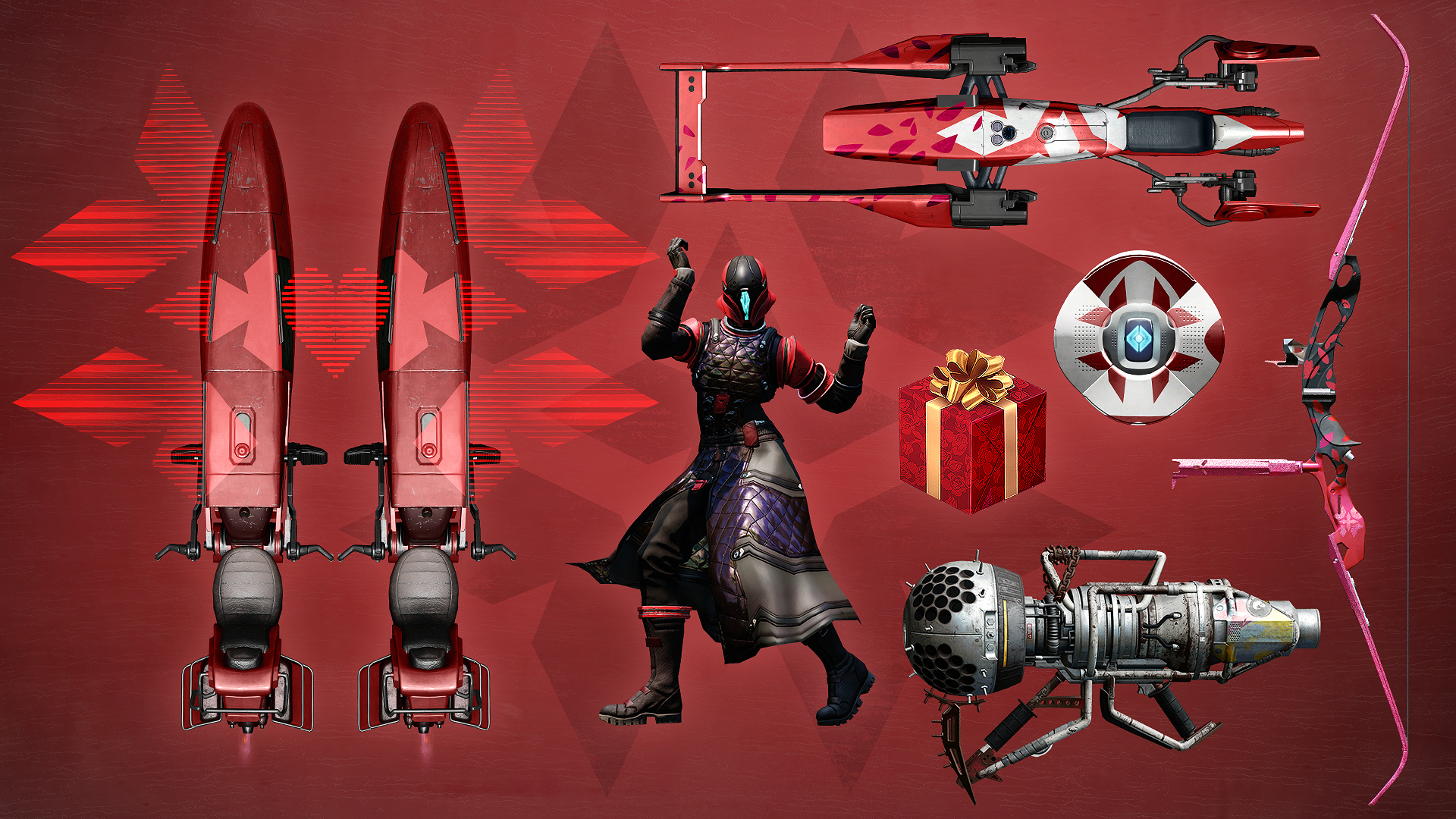 Additionally, spare Confectionary Hearts may be exchanged for Warmhearted Gift packages containing Glimmer, with a slight chance for legendary loot. Once you’ve collected both Sparrows and claimed the associated Triumph, an exclusive emblem will become available through Bungie Rewards.

Eververse will feature many items from previous events for Bright Dust, including two new items exclusive to Crimson Days. One new item will be available for Silver only, the Heartfelt Union Multiplayer Emote. 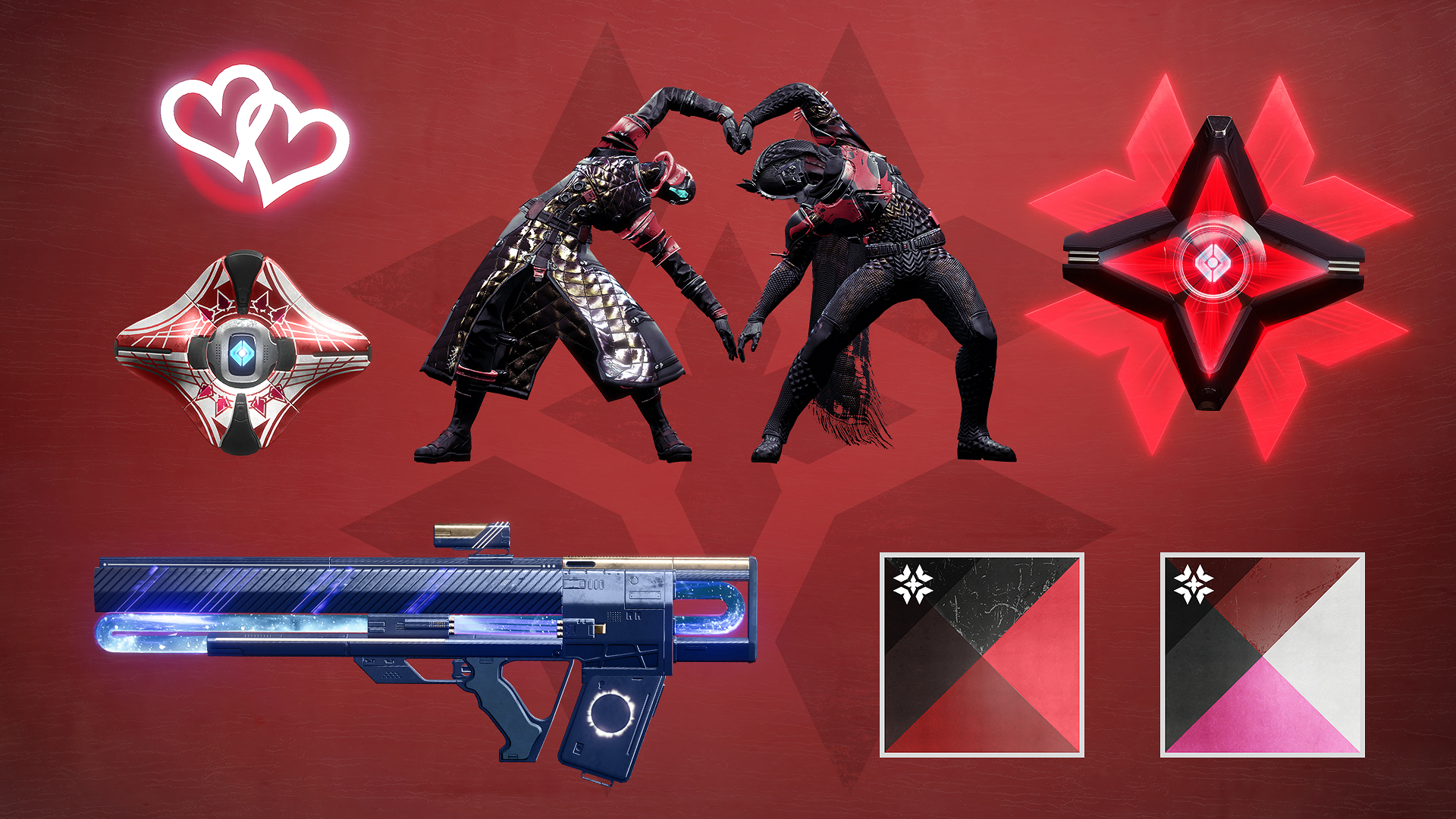 Here's the emote in action:
Crimson Days will be available from February 11 to February 18, 2020.

We’re a little over a month out from the next Season of Destiny 2 and this seems like a good time to start talking about Sandbox. Over the next few weeks, we’ll be covering upcoming changes to weapons and abilities. Some changes will be PvP-centric, while others will bear more of a PvE focus.
Our first subject: Swords.
Some are sharp. Some are blunt. One lets you bend space and time to teleport through enemies. Another has projectiles that can take down foes at range. Since the launch of Destiny 2, we’ve been seeing feedback on general functionality and the team has been kicking around ideas on how to make things a bit more enticing.
After some brainstorming and development time, Swords are receiving a sort of tableflip when it comes to light attacks, heavy attacks, and guarding. While you’ll still rip and tear through opponents, as you would expect from a Sword, most of what you know needs to be unlearned. The blades have been rebalanced, and a new energy meter is making its way to swords. Below, you’ll find a full rundown from our development team.

Dev Team: Swords are getting a little more love this Season. While Swords have been a staple of Destiny ever since their introduction in The Taken King, we felt they were due for an update both to freshen them up, but also to allow us more room to work with them in later releases.
Sword Energy
Guarding
Light Attacks
Heavy Attacks
Shield Bypass
In general, Swords have also had some of the damage amounts for different attacks changed, and the various Sword perks have been adjusted. So you’ll want to experiment a bit after the changes hit. We do hope you’ll enjoy the changes.

Blinded by the Light

Hotfix after Hotfix, Destiny Player Support is here for you. Timetables, known issues, and frequently asked questions are handled with care. They approach each conversation with white gloves and gold standards.
This is their report.

CRIMSON DAYS AHEAD
Next week, Crimson Days returns to the Crucible. Our Help article will update on February 11, 2020, to bring you updated information about the event, including that it will end at the weekly reset on February 18.
Here are a few known issues about the event:

HOTFIX 2.7.1.1 AND RESOLVED ISSUES
Next Tuesday, February 11, we will release Destiny 2 Hotfix 2.7.1.1. This update will resolve some issues currently affecting players. Here is another preview of some of the issues that will be resolved:

Additionally, here’s the timeline for the Destiny 2 Hotfix 2.7.1.1 release on Tuesday:

Over the years, there have been quite a few “metas” in Destiny 2. Different Legendary weapons will take the spotlight from time to time, sometimes usurped by a truly Exotic underdog. This week, our winner brings a montage using every exotic in the game.
Movie of the Week: SoaR-ing

Winners will find their new MotW-themed emblem in their collections within the next year or so. If you have some sweet clips or a fun montage, make sure to submit it to the Community Creations page. For carnage, or a chance for a sweet emblem, apply within.
We’re almost to the weekend, but we’ll be scouting the Destiny Fashion scene for combinations worthy of an emblem. In case you missed it, we kicked off another Fashion Week on Tuesday. Only requirements: the Star Light, Star Bright emblem from the Guardians for Australia foundation effort, and a good eye for fashion.
Reply to this tweet with a picture of your Guardian and the emblem equipped. If we retweet you, the Levante’s Prize emblem will be granted to you within a week. Here’s a quick example of a recent winner:

I can’t wait to see what combinations you cook up. Have a great weekend, and we’ll see you next time.
Cheers,
Dmg04