Sep 27, 2018 - Cozmo_BNG
This week at Bungie, the Dreaming City revealed its underworld.
The curse on the Dreaming City has grown to its most potent state. As the curse grows stronger, the world changes with it. Some of you discovered a new portal and dove into the Shattered Throne to attack the heart of the curse. You still have until the reset to give it a try. It’s an endgame activity that puts your most powerful gear and skills to the test. If you are not quite ready yet, don’t worry, the Shattered Throne will return when the curse cycle is at its worst again in three weeks. That should give you some time to Power up and prepare to explore its depths.
That’s not the only new activity that became available this week. We also released a new Crucible mode along with new maps to boot. If you have been too busy with the plethora of other options available on the Director, here is a quick look at the mode and maps available now for all players of Destiny 2.

Ever since Forsaken launched, we have received tons of feedback on a wide variety of topics. Two issues seem to stand above the rest: the cost of Masterwork Cores and the drop rate of Exotic weapons and armor.
We asked the investment team to talk about some of our goals with Masterwork Cores and Exotic drop rates, the problems we’ve identified, and our plans for addressing them.

Investment Team: We have been monitoring the community’s feedback concerning Masterwork Cores and Exotic drop rates. Here is a quick breakdown of our original design goals along with some of our plans to address your feedback.

We’ll continue to monitor your feedback and will give you more details about these changes before they go live.

On the Next Iron Banner…

Last week, Lord Saladin returned to the Tower for the first time since the launch of Forsaken. He brought with him a few changes to Iron Banner, and we’ve been monitoring the community’s reaction to them. Senior Designer Jeremiah Pieschl has some information about our plans for the next Iron Banner.

Jeremiah: One of the goals we have for Iron Banner is that it’s an opportunity for lower-Power players to catch up or reengage in their pursuit of Power. Based on your feedback and our analytics, we’re not meeting that goal. There are two changes we’re making to help resolve this problem.
The first change is to reduce the completion values for several of the event bounties. Currently it’s very difficult for a lower-Power player to complete the bounties due to the gameplay disadvantages they experience.
The second change is that all bounties will now provide powerful gear.

This was the first Iron Banner in Destiny 2 in which Power was enabled. We have seen feedback from players who enjoyed this and feedback from players who preferred it when Power was normalized. We will continue to monitor the conversation, but wanted to give you some information on exactly how Power affects your damage compared to previous Iron Banner events in D1. PvP Lead Derek Carroll has the details, along with some graphs:

Derek: “There’s a Lot to Unpack Here”
Hey, so… you might be interested in what “Power Matters” actually means going forward in Iron Banner. In the past, we’ve published a nice-but-not-exactly-straightforward graph pulled straight from the game’s content. This time around is no different, although I will take a bit of time to explain what that purple line means to you, the player.

As you read left-to-right across the graph, you’re seeing the effects of having Power that amount lower than the player you’re attacking.
For example:
Oh, one more thing: THIS CURVE ALSO WORKS THE OTHER WAY.
If you’re 20 Power above your opponent, for example, you will do a bonus 10% damage against them.
(And so on, down the curve.)
I hope this explanation helps you to anticipate what is happening out there in the field, where numbers and bullets are flying around.
All of these changes should be available for the next Iron Banner, and we will continue to monitor your feedback during the next event.

That Wizard Came from High Moon

Previously on this Bungie Blog, we featured some of the artists here at Bungie. This week, we invited our partners at High Moon Studios to show off their amazing work on Forsaken. Check out a few of their favorites, and click through to check out more of the work in their personal portfolios. 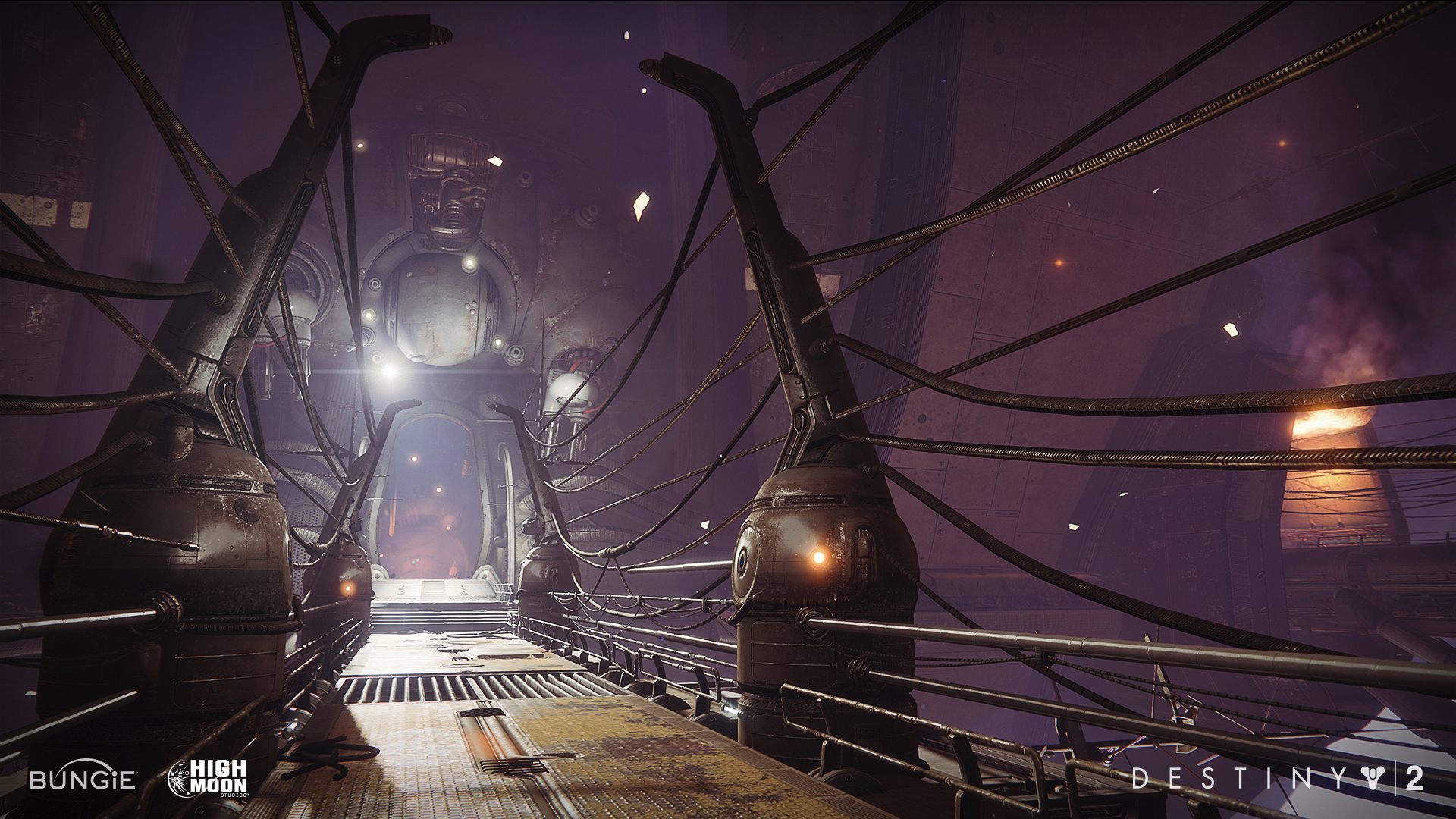 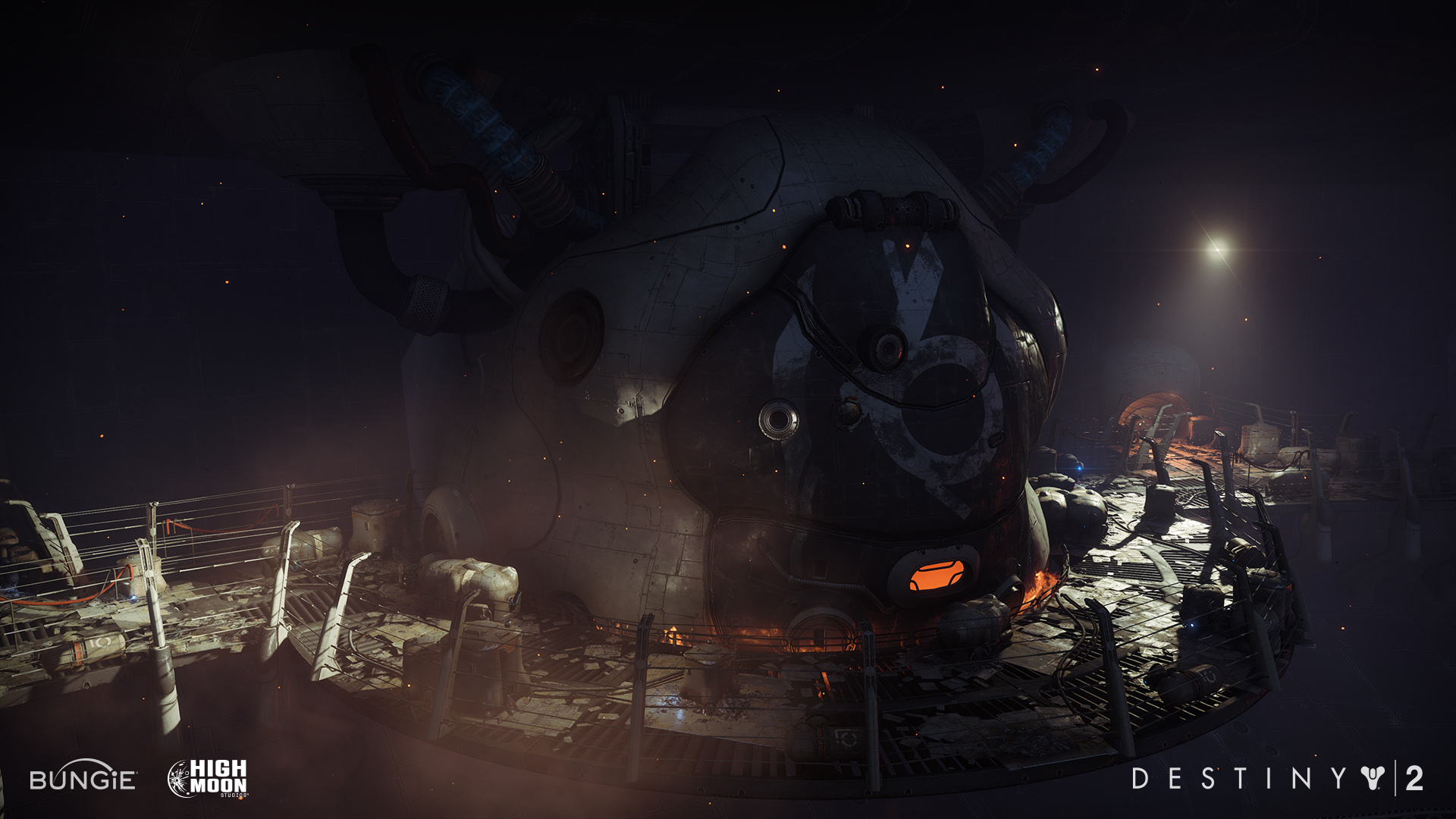 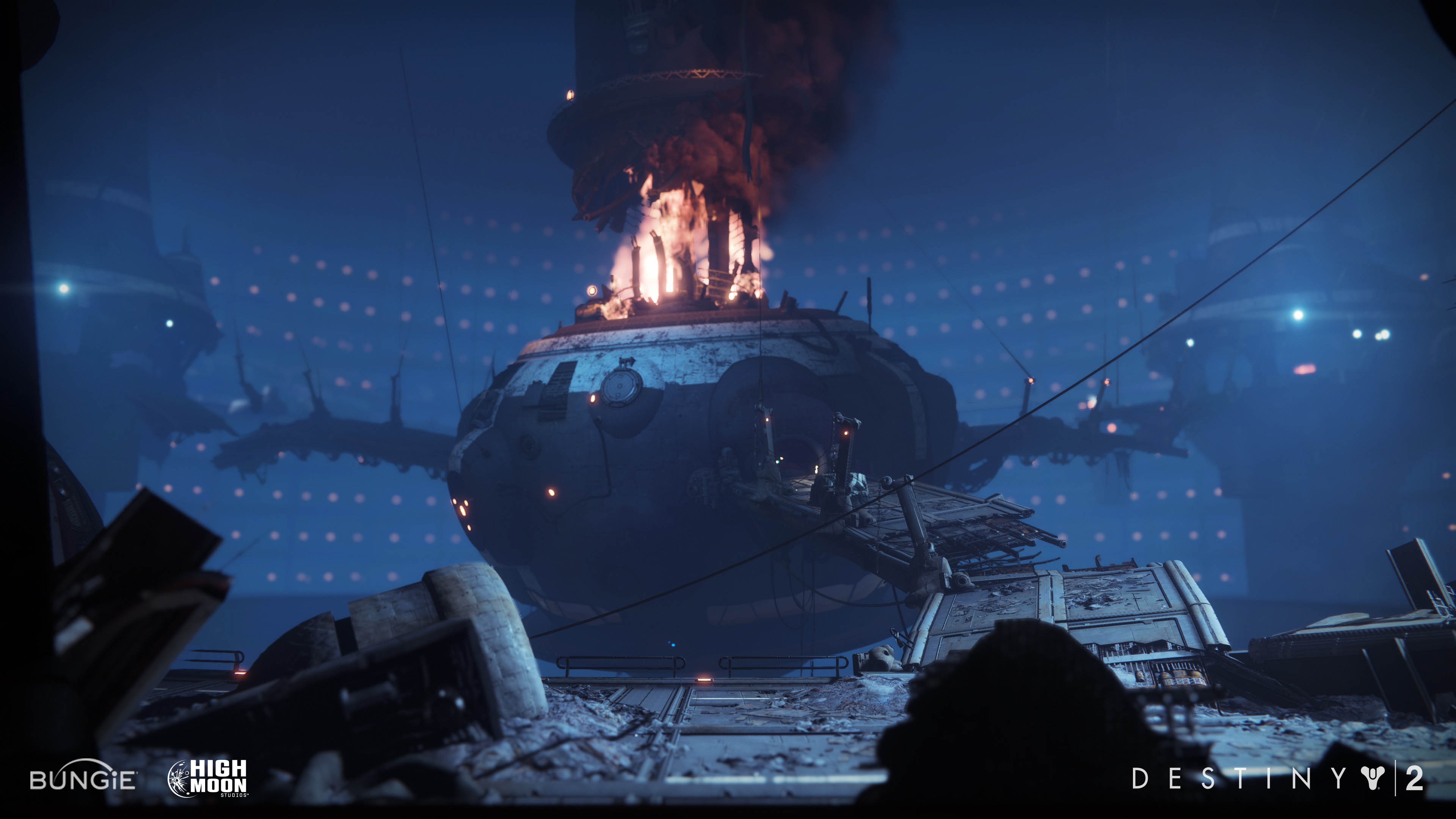 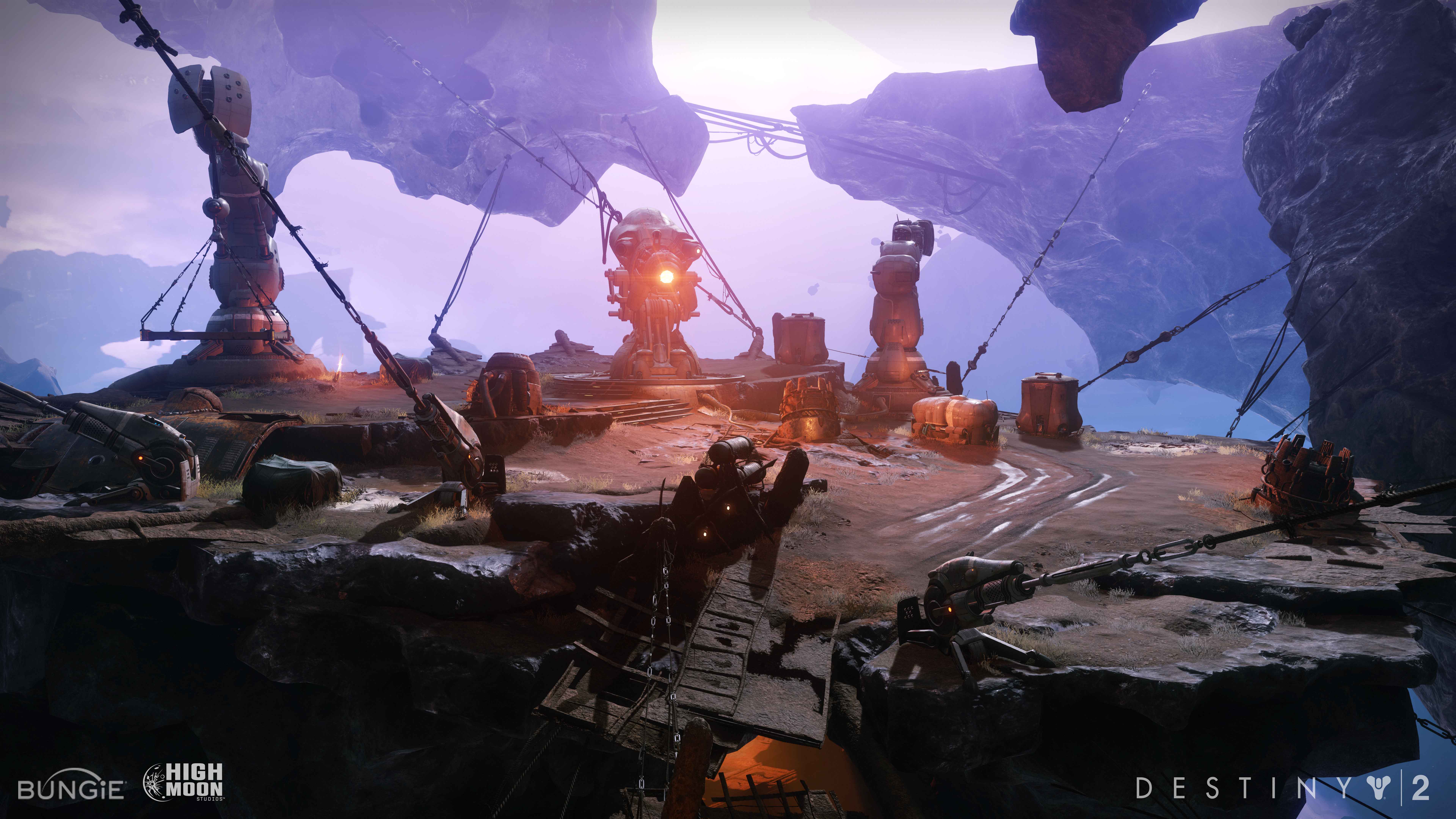 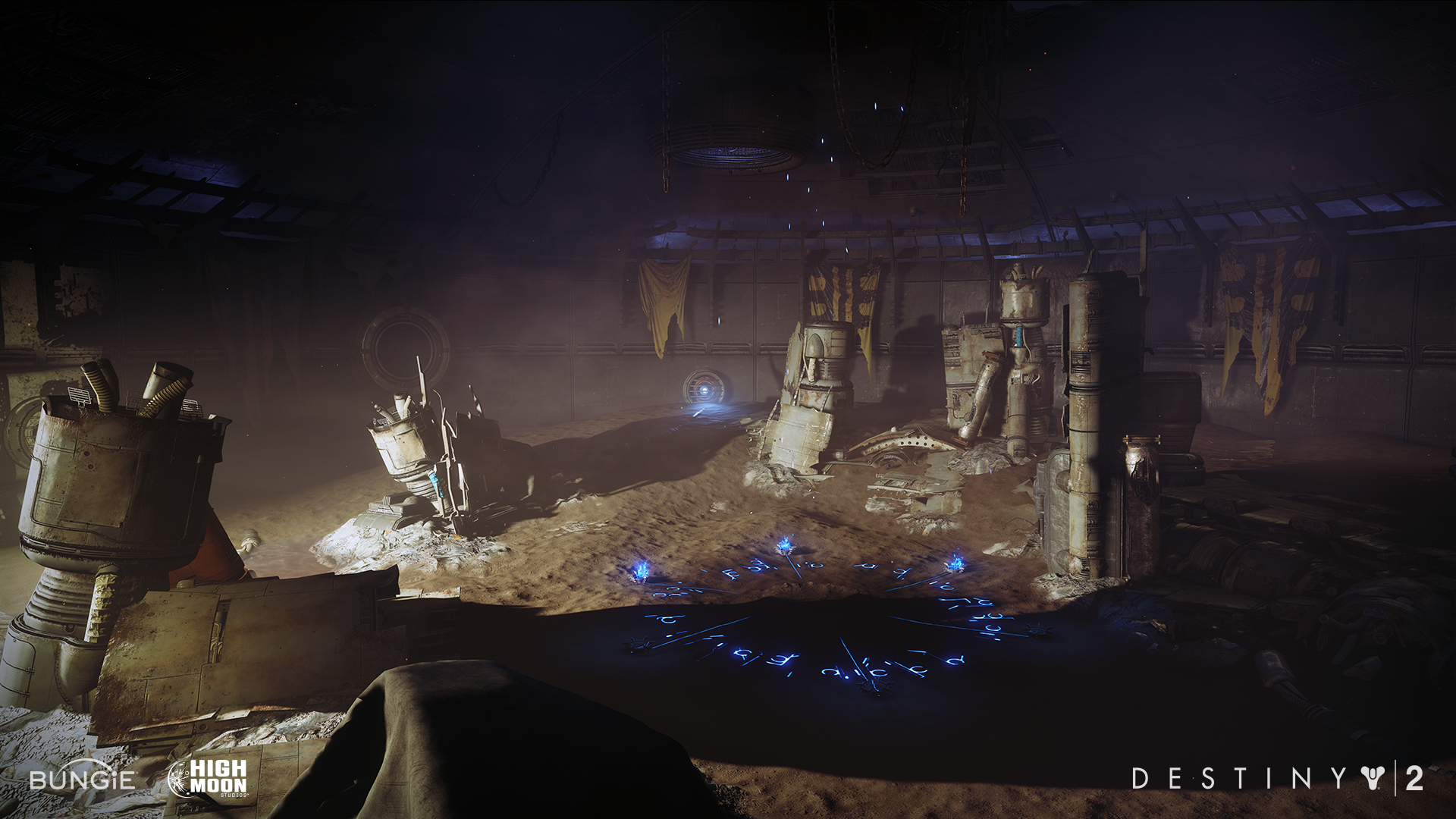 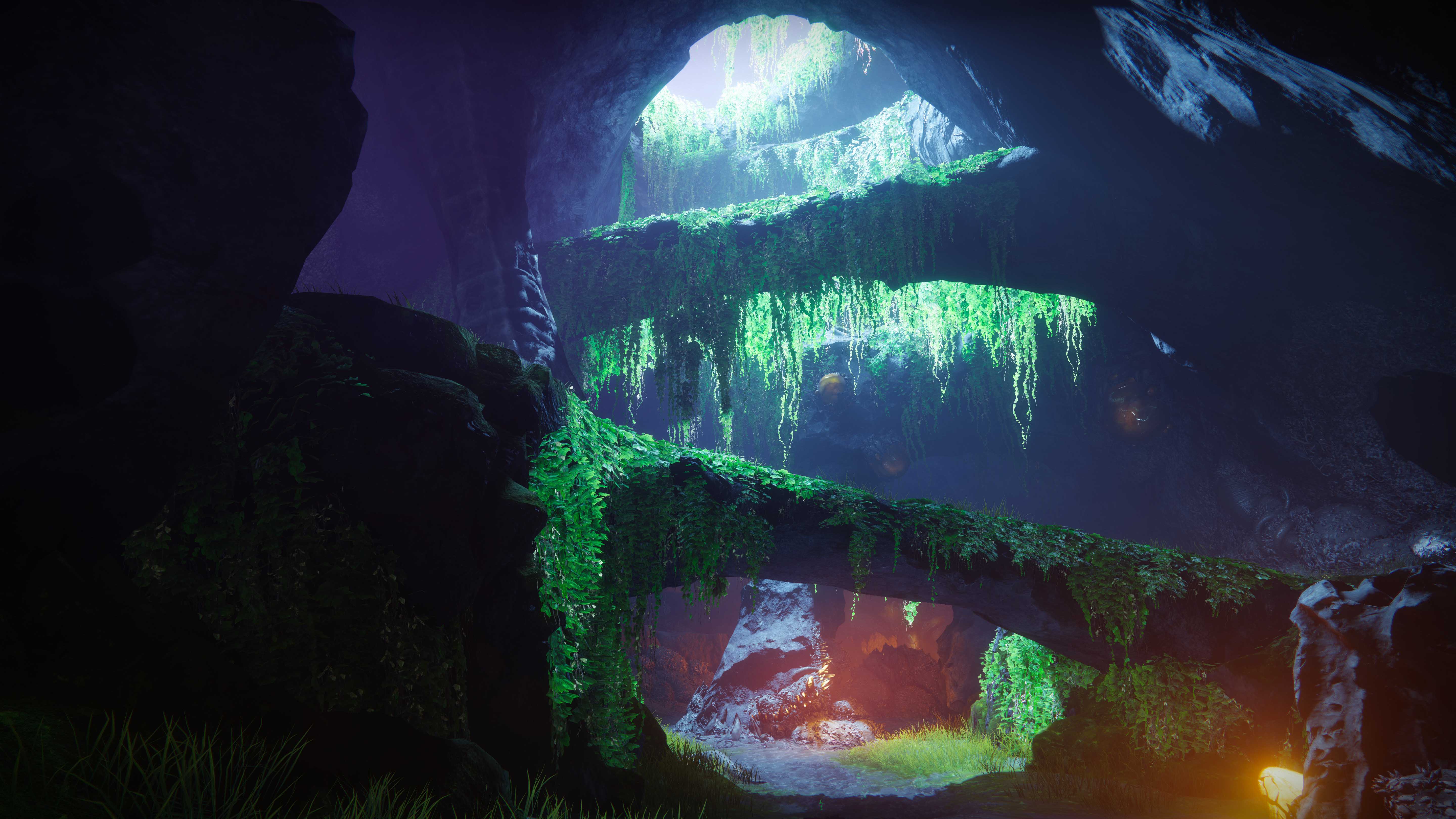 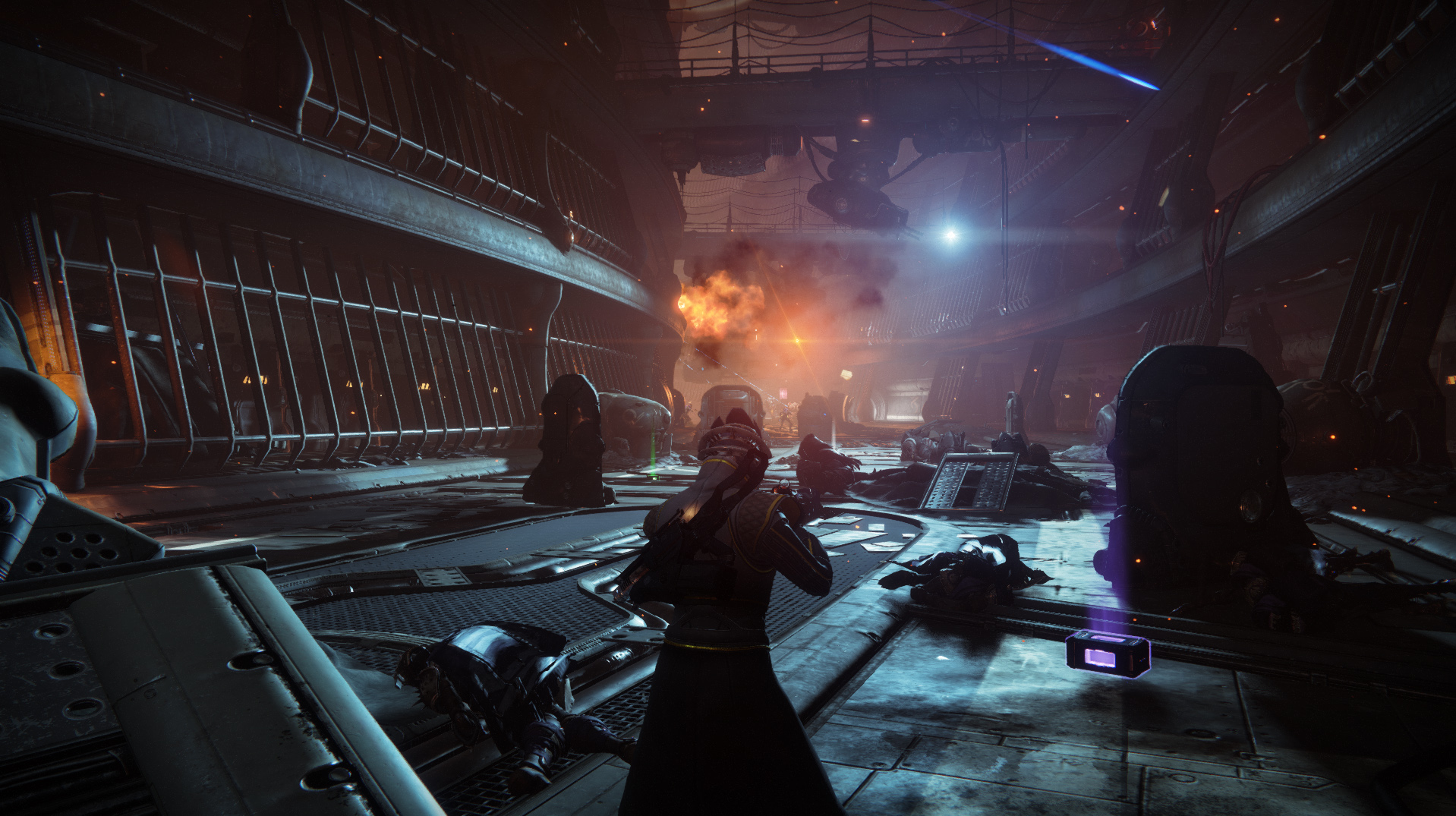 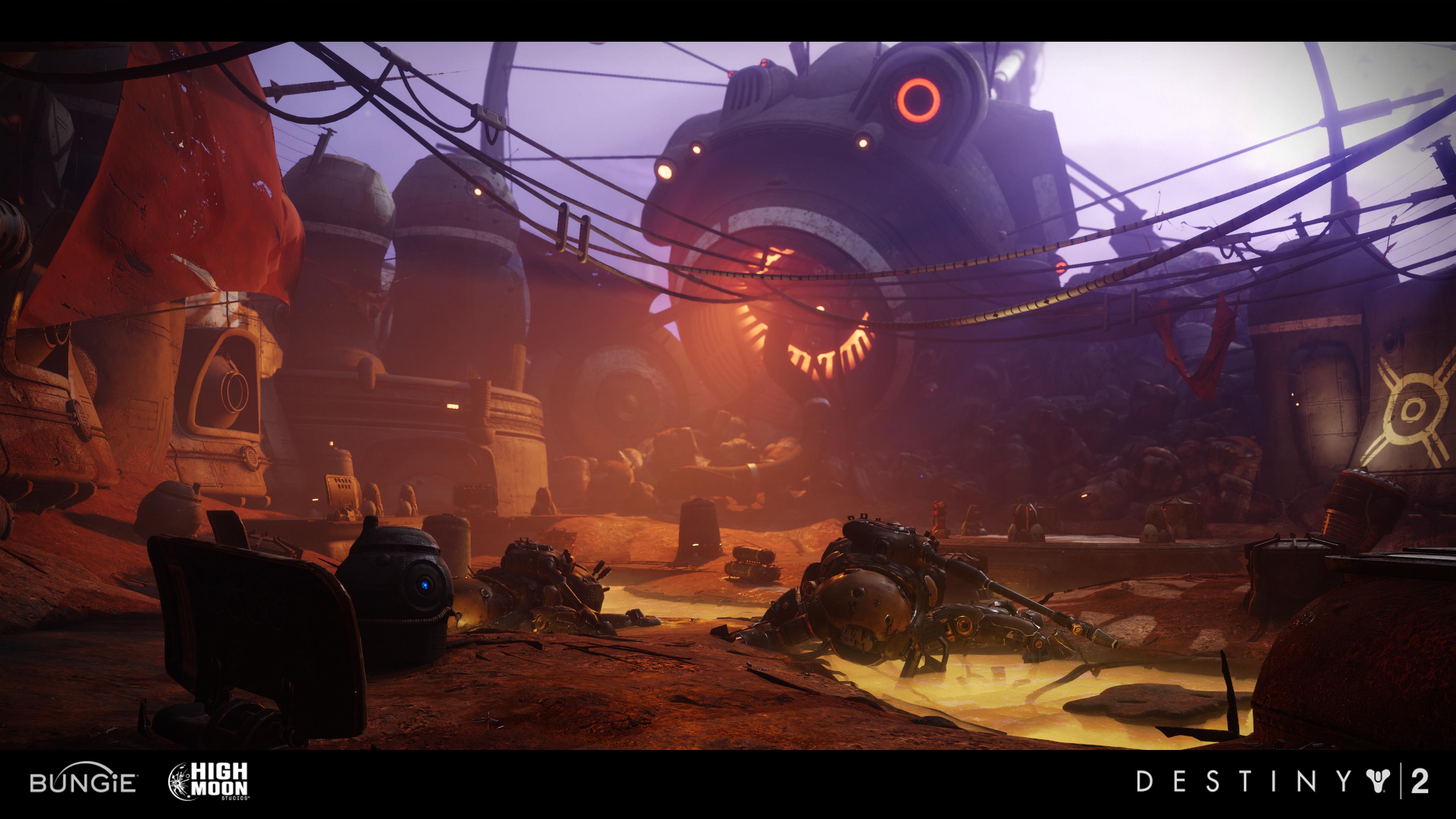 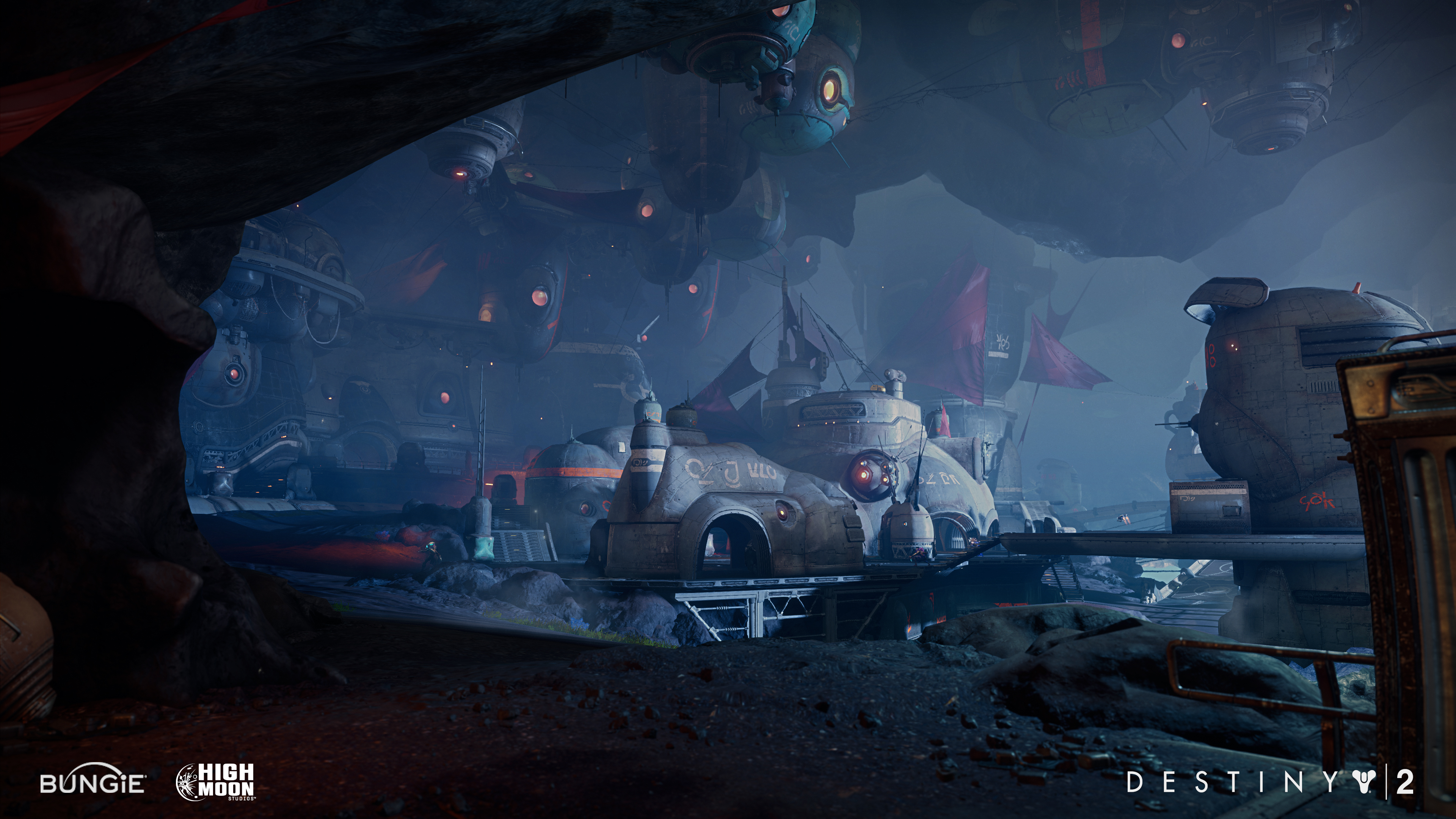 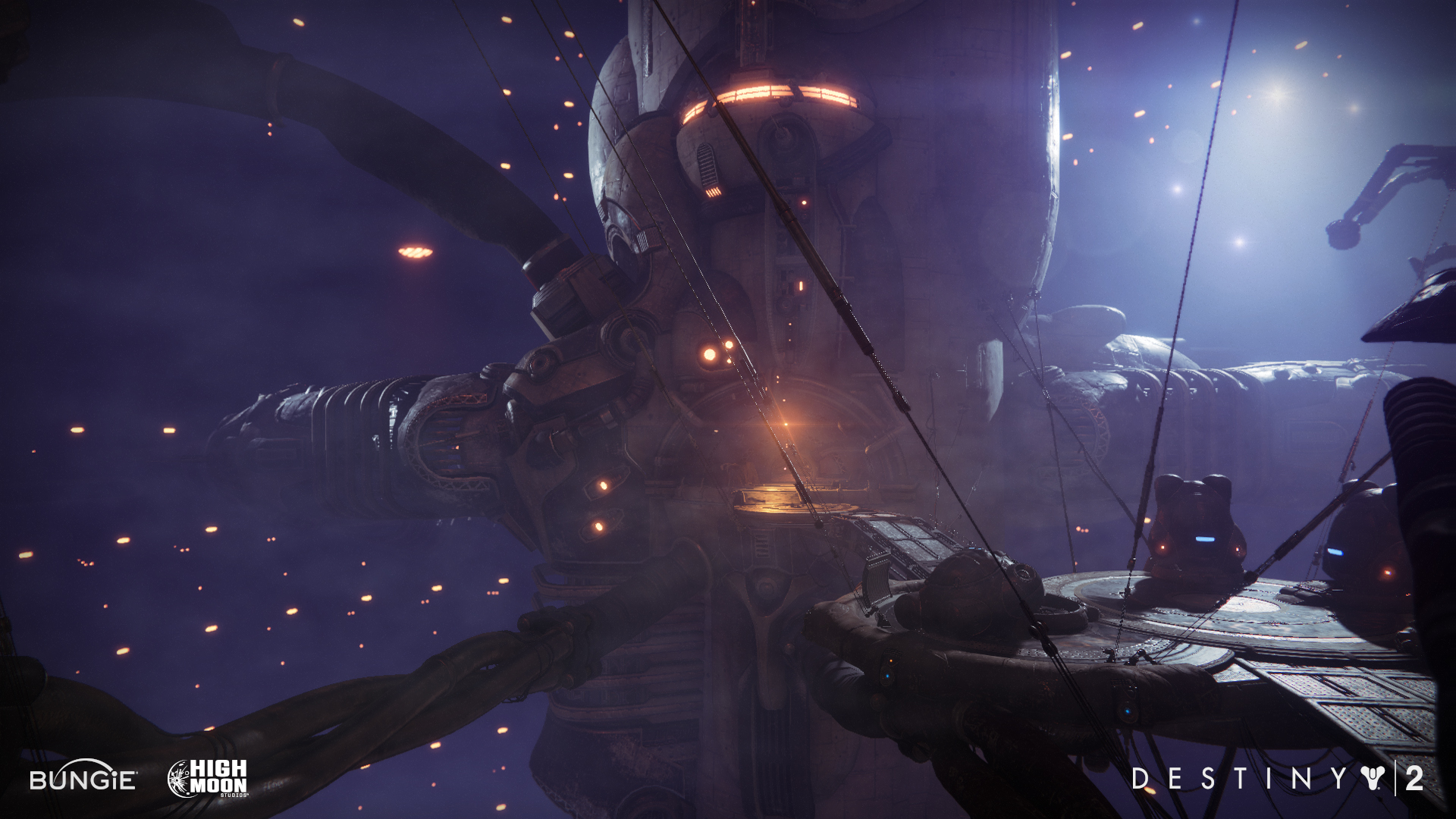 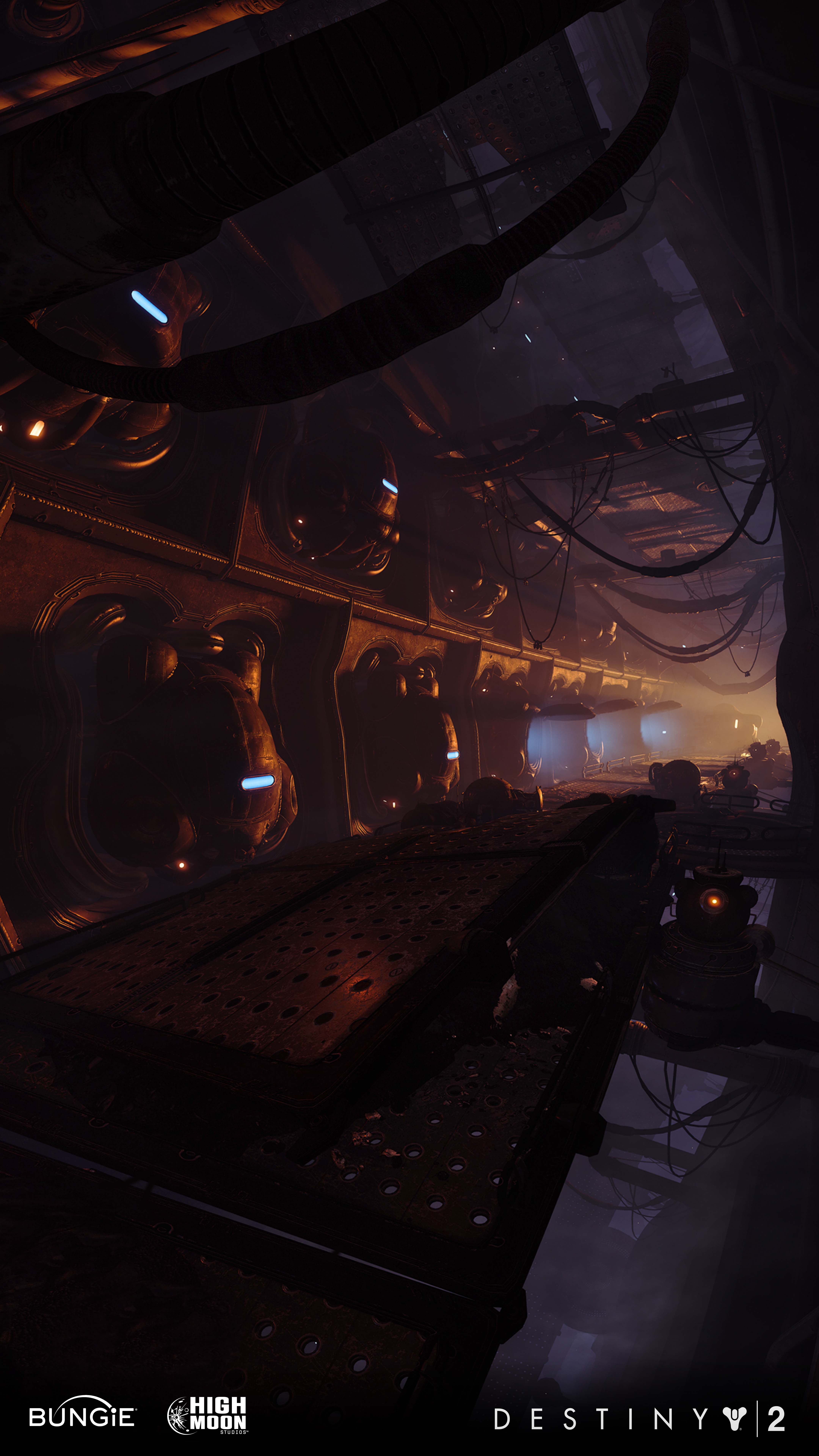 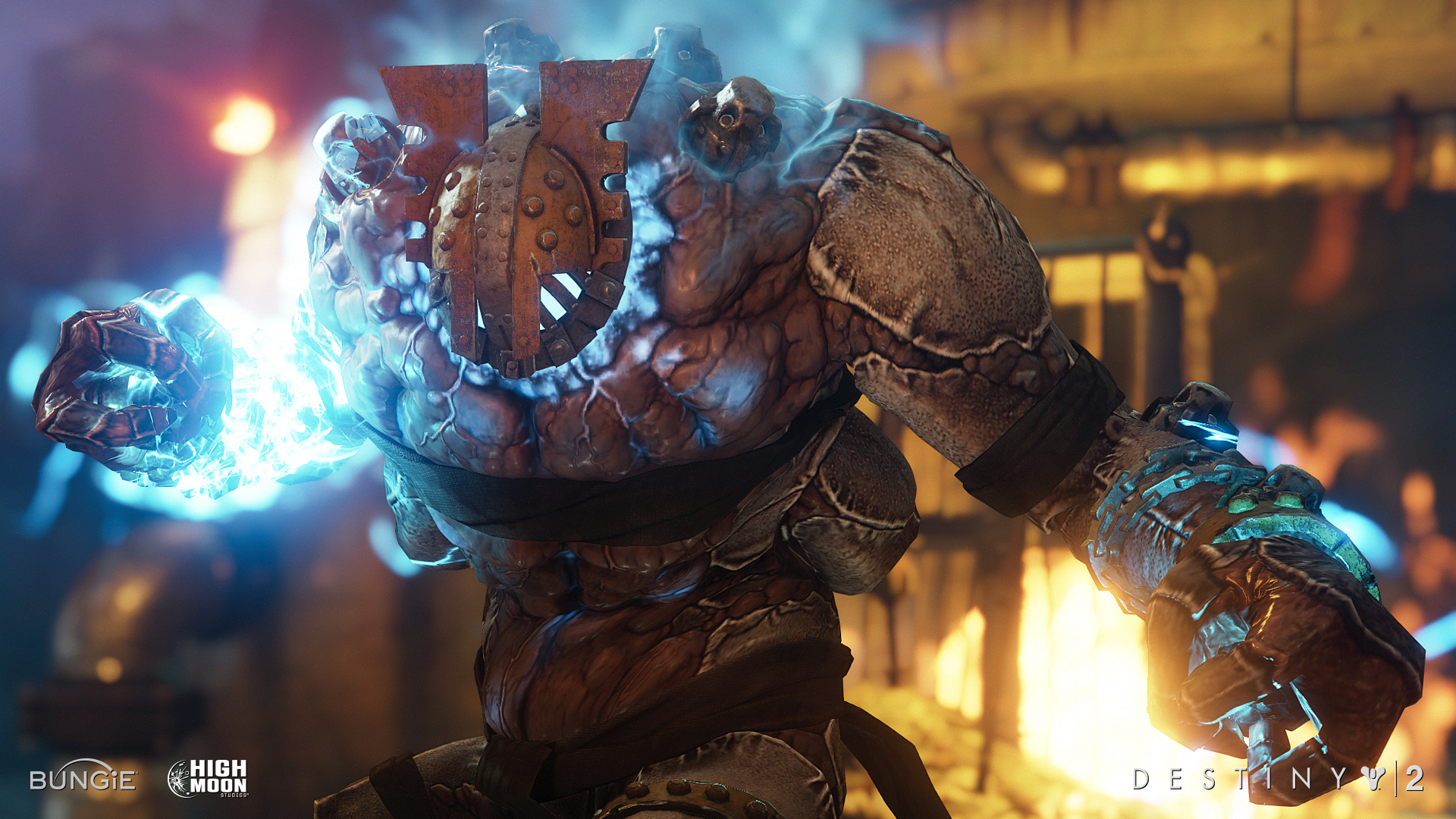 We’re about to kick off production of our annual Holiday greeting cards and need a good Destiny 2-themed image for the front. We thought we would open it up to the community, seeing that there are so many talented artists among you. As with any artist that we feature, if your image is selected you will receive the "Artist in Residence" emblem.
If you are interested in submitting an image, you can provide an asset based on the following specs to the Creations page with the words “Bungie Holiday 2018” in the description.
Here is a look at some previous cards, for reference. 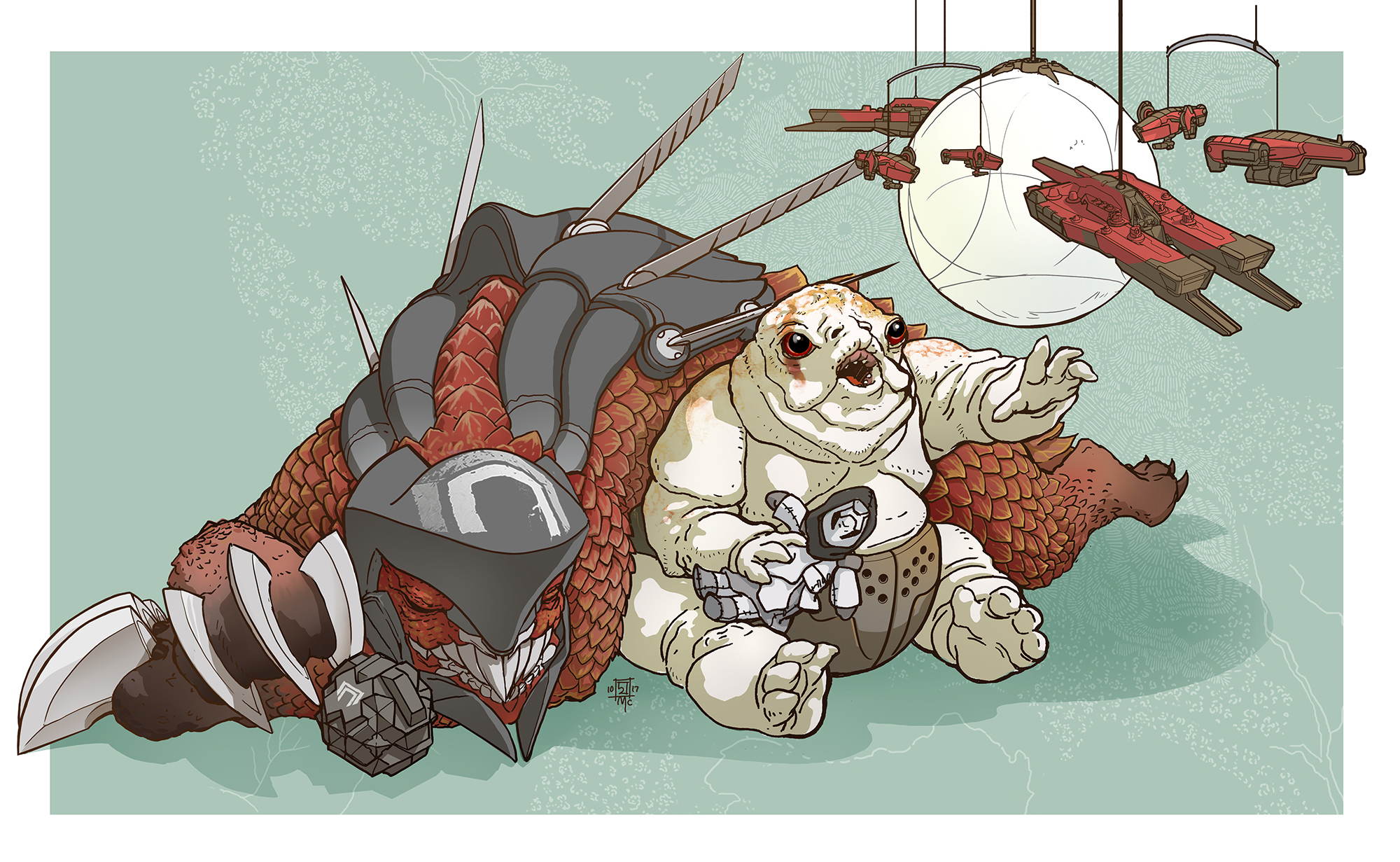 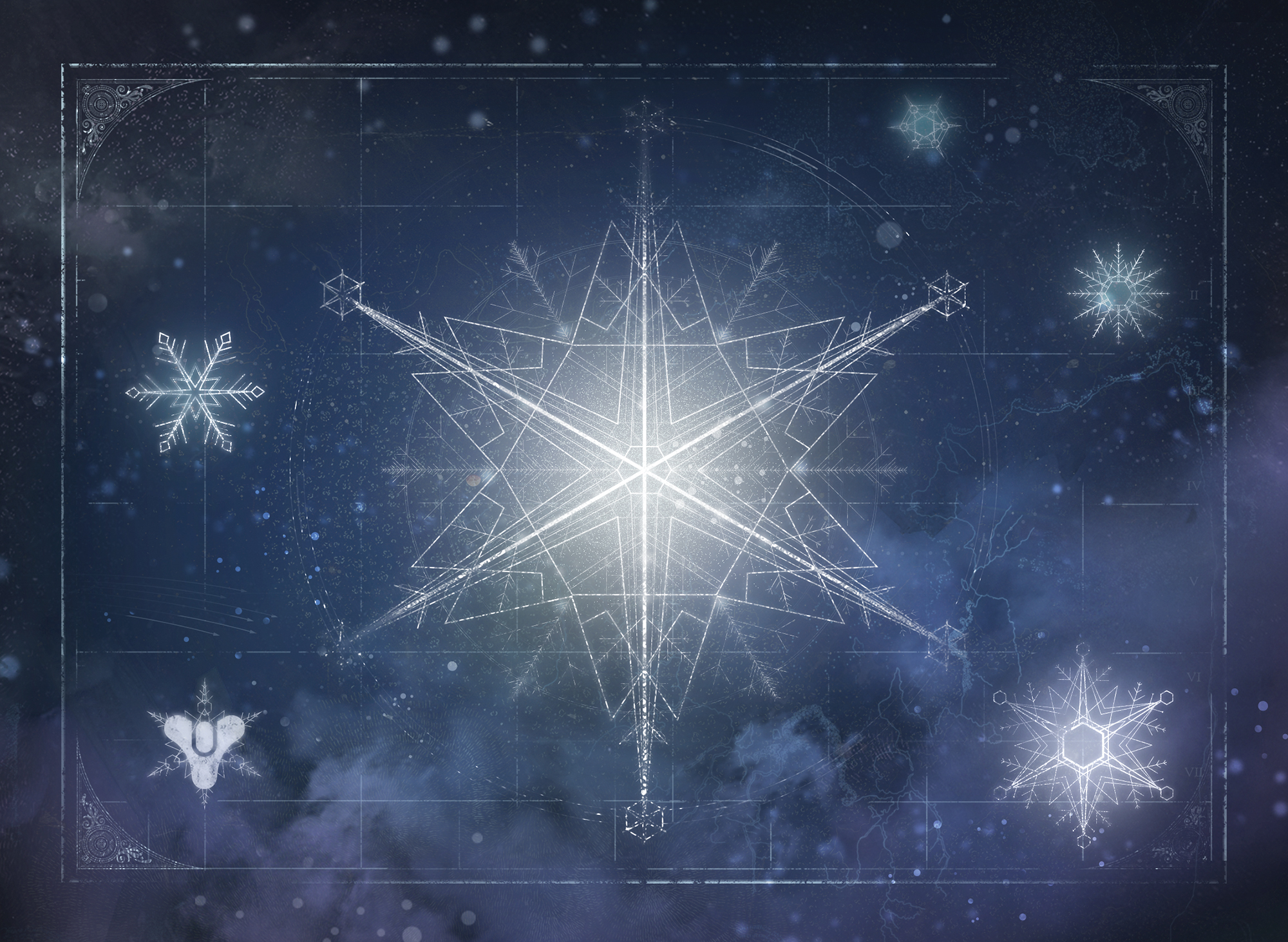 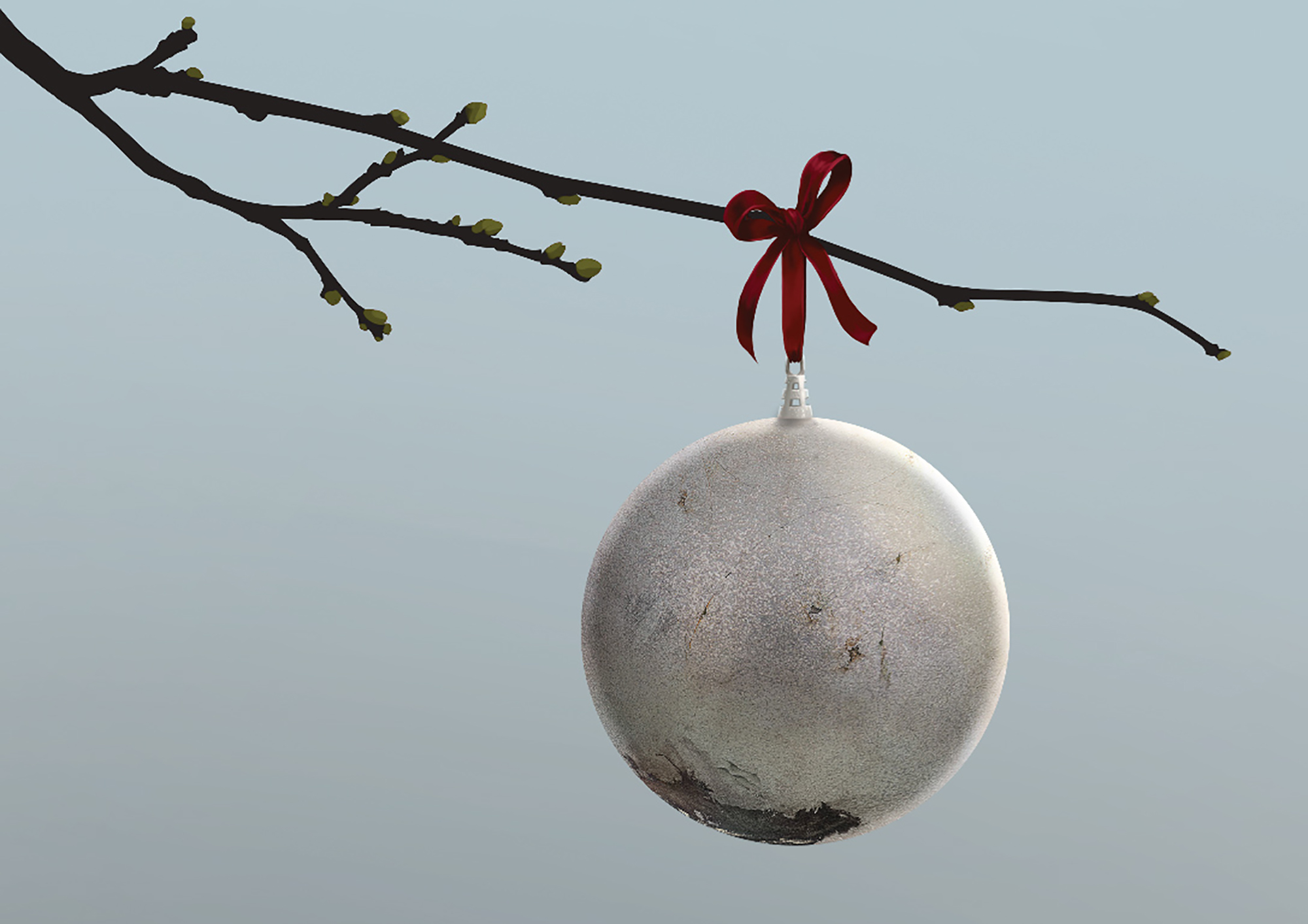 2015
Get your entries in by October 11, and we will announce the winner on October 18. While we will be selecting the winner, you can vote for your favorites on the Creations page to make sure we see them. The cards will not be resold. Please review Bungie’s intellectual property and trademarks guidelines here.

Our Player Support team continues to track all known issues. If you are having trouble, seek them out on the #Help forum.
This is their report.

Darkness in the Light

This week in Destiny 2, Forsaken players began their pursuit of Malfeasance. As players started making their way through the quest for this Exotic Hand Cannon, it was discovered that the three-player quest step “Darkness in the Light” could be launched with a fireteam of up to six players.
While we are working to address this issue in a future hotfix, we urge caution to fireteams who launch into this activity with more than three players, as it was designed and tested for three-player fireteams. Players who launch into this activity with four or more players may encounter memory issues, which may result in poor game performance or unexpected client crashes. Stay tuned for updates.

Today, Bungie.net underwent website maintenance. During this maintenance, API authentication was disabled, and thus some API services were not available for use across Bungie.net, the official Destiny Companion, and third-party applications.
Now that this maintenance has concluded, players who encounter issues with Bungie.net and API services are encouraged to report them to the #Help forum.
Destiny 2: Forsaken Known Issues
In addition to the items listed above, Destiny Player Support is tracking the latest issues reported by players on the #Help forum. Provided below is a brief overview of the latest known issues in Destiny 2: Forsaken.
For the latest known issues as soon as they are available, players should visit our Forsaken Vital Information and Known Issues list.

Welcome to another edition of Movie of the Week. This is where we shine a spotlight on the best video creations we see submitted by the community each week. All the creators whose videos are featured here will be sent the Lens of Fate emblem. If you would like a shot at getting the emblem and seeing your video here, submit your video to the Creations page.
Movie of the Week: Solo Shattered Throne (SPOILERS)

Keep an eye out for more Bungie Bounties! Here is the full schedule for next week. 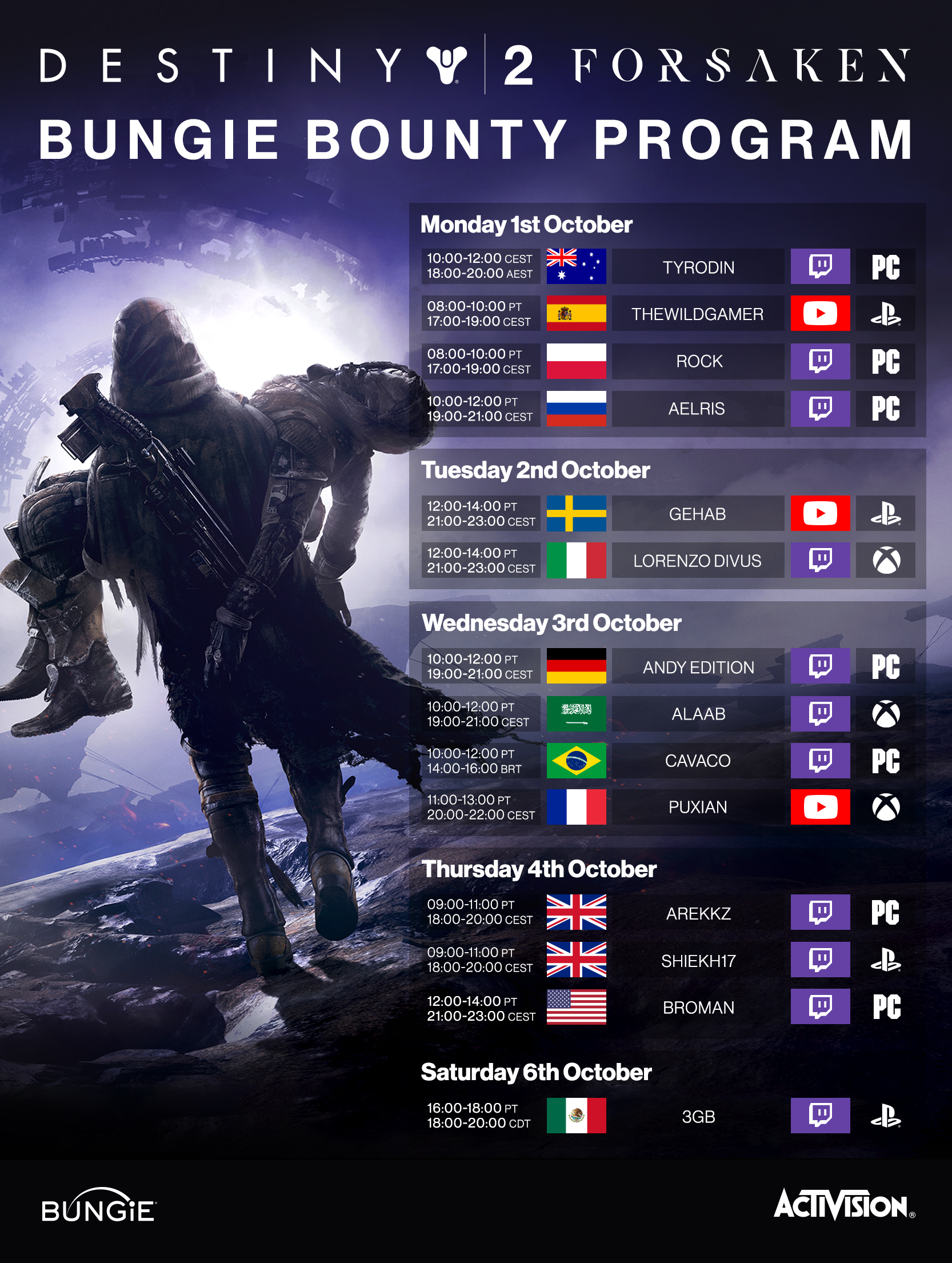 From here it looks like you had a fun week. It’s been a blast watching you all continue to discover the secrets of the Dreaming City. Thank you for playing and continuing to be such an amazing community.
Dmg04 is out searching for bears in Yellowstone this week. He will be back to tag me out next week as I head to Colorado. Feel free to leave him a message on what you would like him to talk about next time. At this point, DeeJ has no vacation planned. We’re worried about him.
<3 Cozmo