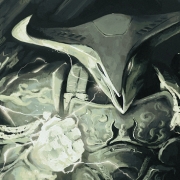 I just replayed the 1st mission again and noticing the dialogue. Considering we know now that Savathun had her memories erased, probably had her Hive followers remember some about they're relationship-- they were their version of "The Last City". On first meeting, we killed the Hive guardian (probably no worries) but then [b]we killed the Hive ghost[/b]. And Savathun was referring to us as "honored guests" and not as usual 'guardians' but at the same time I think [b]she had sensed some Darkness in us[/b] because of Stasis and so we were strangers to her that came and attacked her people and killed a ghost-- something that "mirrors us" she said. These [b]Lucent Hive were pure Light[/b] already and we were half Light half Dark. . We have to keep in mind [u][b]Savathun was basically "reset" into a fresh new guardian[/b][/u] and she wasn't who she was before and during season of the lost (much like Crow). Despite how devious Savathun's personality seems, she's still like a good leader supposedly trying to protect her people and the Traveler. I think in their eyes (and even objectively) we were the 'bad guys' in this one.
English
#lore #destiny2 #Campaign #Savathun
評論 回覆 建立主題
檢舉