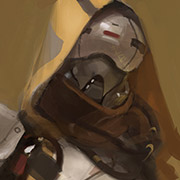 Okay, this is just for the "wish list," but I think it's a fun idea. Give bosses medals with points, and a score card after the encounter. Compare with player scores for extra legendary loot. This would be especially fun in the seasonal events which are basically "un-failable" (you just take shorter or longer to finish, which is perfectly fine for casual matcmaking PVE). For example: [b]Ring Out! [/b]- Killing a Guardian by knocking them off the map. 100 PTS. [b]Curb Stomp[/b] - Killing a guardian with a foot stomp. 100 PTS. [b]Vertical Curb Stomp[/b] - Killing a guardian by knocking them into a wall with a foot stomp. 200 PTS. [b]Party Wipe! [/b]- Killing an entire Guardian fireteam before any guardian can respawn. 1000 PTS. [b]Can't Touch This [/b]- Killing the same guardian twice before that guardian can inflict damage. 250 PTS. [b]No, I Expect You To Die[/b] - Killing a guardian before the guardian can escape from a trap. 200 PTS. [b]Not Worth My Time[/b] - Guardian is killed by a minion instead of the boss. 100 PTS. [b]You Are All Beneath Me![/b] - All guardians are defeated by minions during the fight. 1000 PTS. [b]I'm Invincible!!![/b] - Absorb death-dealing damage during shield phase. 500 PTS. [b]Dark Design[/b] - Guardian killed by Architects. 100 PTS. [b]Your Power Means Nothing[/b] - Defeated a Guardian with light level above the level cap. 200 PTS. [b]Second Time Around[/b] - All guardians are killed at least once. 500 points. [b]Samsara [/b]- All guardians are defeated at least twice. 1000 PTS. [b]King of This Hill[/b] - Killed a guardian defending a control point. 150 PTS. [b]All Your Base Are Belong To Me[/b] - Killed all guardians defending a control point or points. 1000 PTS. What medals would you want to see in boss fights? How would you like guardians to better know their shame? What rewards would you want to see IF something like this ever happened? Post your ideas here!
English
#destiny2 #Destiny2Gameplay #suggestion #bosses #seasonal #scoring
評論 回覆 建立主題
檢舉