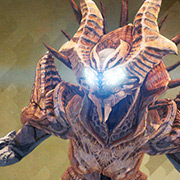 We all know how good this game is controlled and protected : and this a great thing, let me say this, right? They work for make a better " playable " Destiny, and this is what we all want to ( at least I think! ) But seems Bungie, sometimes exceeds monitoring. Let me explain what I mean. On the question " what can cause my account to be banned from Destiny? " we can also find this answer : taking benefits from someone who is, for example, modding game. We know, modding the game isn't a cool thing, of course. But, what if someone without knowing, is taking these benefits? Seems he'll risk a ban too. Is this fair to you? I think not. Example : I meet a random guy in Destiny, he invites me in fireteam, and we play some activities. Or maybe he leads me to a full fireteam : let also imagine he is Modding the game. How can I know that!? Now I'm sure you all are saying " heeeh, but in case you can notice if he is modding! Cause he'll probably fly, use infinite supers..." , and a lot of weird things. You're right. But guess what? What if there are " hidden mods " we can't notice, but only the modder? And in fact, I did a little research on the loved Google, like " destiny mods " or something like that. Hey, I'm not a modder. I was just curious. And guess what I found! Most stuff I found was for PS3 console. Seems that in PS3 scene there exist some tools for various games ( also Destiny ) called Real-time Modding tools or just RTM Tools.These tools, via some particular method of connection between PS3 and PC ( I don't know how they work ), they let you edit addresses of games in real-time, for get big benefits, like a PvE God Mode. But heeeh, as I thought, there are also some hidden mods, like No-Recoil and other stuff. hey! Don't think I tried this stuff. I'm not a modder, and seems your console needs to be a bit particular. I just saw threads and scrrenshot of these tools. But the main question comes back, how can we innocent people know if someone in our fireteam is using this hidden stuff? Heh Bungie, I'm giving you some important info, even if I think you already know all this stuff. Why don't block them then? These tools are .exe so means they're encrypted with some application. It's still possible to decrypt them and see the source code. By that I'm sure you can do something. Do these controls, look around internet. You'll find all this stuff, it's just a tip. Cause you see, on TTK release I got banned and I didn't do anything. That's why I'm getting this doubt. Do you get mad with innocent people in fireteam aswell? cause, as I already said, I didn't do anything, so the only thing I'm thinking to is that I got banned for becoming in a fireteam with a modder. But here the main question comes back again : How could I know that? I also reported two bugs time ago even if nobody cared. Tell me how can I harm this game. I hope in a experienced answer. I'm really disappointed, Bungie.
English
#Ban #mods #staff #Protection #Ban4Life #help_
評論 回覆 建立主題
檢舉