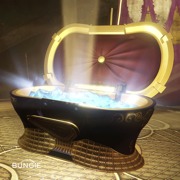 Theory: The Nine= The Warminds, and we are killing them

In Destiny we learn of the Warminds, superior AI built during the Golden Age. One of them, Rasputin, survived the collapse. As far as I know it isn't made clear how many Warminds there are, but we can speculate that there were 9 built, one for each planet in the solar system. Following this, what if the nine warminds, are [b][i]The Nine[/b][/i].? The following is gathered form the grimoire cards, each giving a contradictory view of what the Nine might actually be, and there are [i]nine[/i] possible descriptions: [quote]he Nine are survivors of the cis-Jovian colonies who made a compact with an alien force to ensure their own survival. [b]The Nine are deep-orbit warminds who weathered the Collapse in hardened stealth platforms.[/b] The Nine are ancient leviathan intelligences from the seas of Europa or the hydrocarbon pits of Titan. The Nine arrived in a mysterious transmission from the direction of the Corona-Borealis supercluster. The Nine are the firstborn Awoken and their minds now race down the field lines of the Jupiter-Io flux tube. The Nine are Ghosts who pierced the Deep Black without a ship and meditated on the hissing silence of the heliopause. [b]The Nine are the aspects of the Darkness, broken by the Traveler's rebuke, working to destroy us from within.[/b] The Nine is a viral language of pure meaning. [b]The Nine are the shadows left by the annihilation of a transcendent shape, burned into the weft of what is[/b].[/quote] I've bolded the ones I think are relevant to my theory. Now I should say in addition to my theory, I believe that the Traveler is the vessel of the Darkness and the Speaker is a prophet so to speak (pun intended). The Traveler might be using us to wipe out the warminds, who were tasked with humanity's defense. (Disclaimer, this short bit was not my own idea, but it fits along with my narrative) [b]I believe the Warminds never actually "died" during the collapse. We are told this in order to be misled.[/b] Looking at the one in particular that mentions the warminds being a shadow of a transcendent shape, burnt into the weft of what was, I believe this to be key. [b]In fact, I believe we have already eliminated two Warminds.....Atheon, and the Black Garden's Heart[/b] It makes sense, as crazy as it may seem at first. We are systematically being sent to wipe out these beings. Why would the Speaker, the Traveler's voice, want us to eliminate them? It's also worth noting that both Atheon, and the Black Garden's Heart were locked away in vaults. [b]This was in order to protect themselves from the Traveler and its aggressors. They were locked out of time so that the Traveler could not interfere.[/b] In sum, I think Guardians are being used to wipe out the Warminds, who are vastly superior AI transcendent beings who have sealed themselves out of time in Vaults until enough Guardians exist to turn against the Traveler and stop it. The Darkness is not really what we think it is. The Warminds are waiting until the right moment to strike back, and do what they were "designed" to do--protect humanity. Thanks for taking the time to read this. Even if I am way off base I enjoyed exploring this idea! I will update this as needed.
English
#Story #Destiny #Darkness #Traveler #Speaker #Missions #Warminds #atheon
Комментировать Ответить Создать тему
Пожаловаться