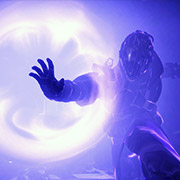 I purchased the transponder from Variks on my Titan. I killed the Vandal and got the scanner buff in Cadmus Ridge. I managed to get two sets of drones but fell off into a pit and died before getting the last set and hacking the console. I found and killed another Vandal but couldn't pick up the scanner. My character no longer has the buff and I can't purchase another. I tried also looking on other two characters to see of maybe I could purchase on them or if they had the buff. Nothing. Help!
English
#Help #bugged #transponder #Braytech
Комментировать Ответить Создать тему
Пожаловаться