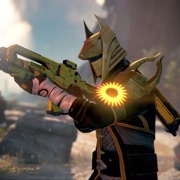 Bungie, A bunch of students at my school found it weird that we have to save to buy SKINS for ships which are useless to the game. I suggested the idea of ship racing in which buying skins increased speed and handling during races but all ship remains same speed go and coming from planet social area. They all agreed to this idea and shared with fellow friends that liked it themselves. I took it upon myself to share the idea directly with you.
English
#feedback #update #upgrade #racing #skins #ships
Комментировать Ответить Создать тему
Пожаловаться