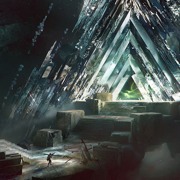 So I was doing hard mode kings fall earlier, and just finished. It took us 5 hours. We were all very skilled and knew what we were doing (except for 1). Our lowest light level was 312, and got to 317 by the end of the raid. Why did it take so long then? One persons connection. My internet usually runs 15mb on a bad day, and 25 normally. Usually I experience a lot of lag, but there was this one random in the game. He was a 317 hunter. We tried to invite him to a party, but he disconnected as soon as he joined. Then, while we were in game chat, I could not hear half of our raid group. He had no idea what to do, went afk constantly, and had horrible connection. Somehow is connection was so bad that it started making everyone have red bar connection. We tried to ask him if his internet was bad, but he would completely ignore us. And the one time he answered, he tried to blame it on me. We went to orbit and came back multiple times. We spent around 2 or 3 hours on the beginning all the way to golgoroth. Then, we did sisters in one or two runs and got to oryx. A few hours into oryx, failing every time because of him dying or him not killing 4th knight, (he was mid), he pulled the obvious "oh uh guys I think I have to get off in a few minutes my parents are telling me to go." It was 7:00, obviously fake, but we didn't say anything because we were all tired of the raid. Then, another guy left, we got two new randoms, and did it in about an hour. We just got our rewards, decrypted engrams, and got offline. I don't know why I am even posting this, but I think that it is stupid that some players connections can be so bad, and they try to deny it or blame another person. If you have bad connection, just please do us a favor and if people try to tell you that your connection is bad, listen to them, and if you can't fix it, leave. Some raid groups try not to be d!cks and won't kick you, like my group. But I just wasted so much time because of bad connection.
English
#Destiny #truestory #feelsman
Комментировать Ответить Создать тему
Пожаловаться