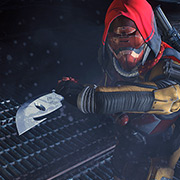 This has been bugging me all day. After doing a bunch of quests throughout the week I decided to finally go out on a treasure hunt given Bungies last update before todays with saying "more secrets on the dreadnaught". I found a few but they lead to easier ways of fragments Iv already gotten. However theres one thing I noticed while exploring. While going to get fragment "XX: Hive" there is a platform that goes into the wall when it splits at the top. It may be nothing at all but Im very skeptical on it. Why in the world would they have one sticking into the wall rather than one of the smaller platforms? This could just be nothing at all and I could be over analyzing the environment but I cant help but think theres something up with it. Especially after cayde said "dont trust anything". Let me know what you guys think.
English
#Destiny #Secret #hunt #treasure #dreadnaught
Комментировать Ответить Создать тему
Пожаловаться