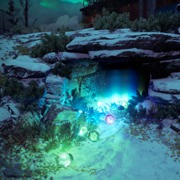 Not totally sure where to put this. Part fan lore part exotic idea so I guess I'll put it in here. Go to Banshee for him to ask you a favor. "Hey guardian you know that auto rifle drifter gives out? Yeah well some other guardians have been bringing them to be. They've been malfunctioning out there. Drifter likes to keep it old school. Doesn't like using all the cool stuff we have these days. Vanguard issued weapons don't jam is all I'm going to say. Especially not mine. Anyways you got one of those right? Great get out there and collect some...data for me will ya?" Quest steps: Get killing sprees with this weapon in any activity Get 100 kills in the crucible Get 10 multi kills in the crucible Complete 15 heroic public events Complete 1 nightfall with a score of 100K or higher Return to Banshee in the Tower Funny enough when you are done with the quest steps your Breakneck stops working. "Ay you're back already. Let me see the data you got will ya? And your Breakneck too. Oh it stopped working? Well you know like I said before. Alright here you go. Now get out there and do some damage." You receive Relentless. Exotic perk Hungry Beast: Kills with this weapon grant bonus damage. Perks also include ambitious assassin, rampage, and onslaught. So basically you're getting a better version of Breakneck that has rampage on top of rampage and increases mag size when you get kills. This quest will spark a beef between Drifter and Banshee. Or at least a one sided beef in Drifter's part. Drifter: So that hunk of bolts in calling my guns trash huh? Well that has to be the most disrespectful thing I heard in a long time. What does he know anyway? He probably can't remember how many fingers he has. Banshee: So what I fixed his gun that's what I do. *brief pause* Hey guardian where you get that auto rifle from? Banshee literally forgets everything and thinks Drifter doesn't like him for no reason.
English
#lore #destiny2
Comentar Responder Iniciar tópico
Denunciar