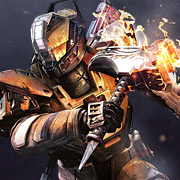 So I have been wanting to write this for sometime now. I am a casual player in destiny. And when I say casual I mean do my weekly milestones at my own pace, slowly level up characters and the occasional crucible. That was how I played Destiny, in all my time playing the first game I have only raided once and it was vault of glass. Being someone who has grown to playing single player games I found it hard to socialize and find people to learn the raids. This was something I felt bad for and wanted to correct going into the second game. When destiny 2 launched I played it a lot and but again never got to experience either the raids or trials. That's when I found out about the fireteam feature in the bungie app and decided to give it a shot. I had ended up joining a clan and even went as far as to get to calus but after nearly two hours of try not everyone could stay behind and so the group disbanded but I still had the checkpoint. I went into the comapnion app and put up a fireteam for Calus CP and saw it fill up in a like a minute or two. I was pleasantly surprised and this is where my journey truly began. I had some of really nice people join me and I explained to them that this was my first time ever raiding and even more that I barely understood the mechanics. These random people did did something amazing they went on to find what each one in the fireteam were good at. They assigned me to punch psions outside while others got assigned their roles and we gave it our first try. We had a few wipes and about an hour went by but they were all determined to get it done so we persevered and in the end after nearly 2 and a half hours we got it done !! The best part about this was every time we wiped not a single person got angry at the other or called people out but rather gave the best advice and strategy to overcome it. I felt a sense of accomplishment after finally beating calus and more than anything finding that a complete bunch of randoms can be a blessing when it comes to braving something new. And this inspired to start something new, a few months later just before warmind launch I ended up starting a new clan and made me reach out to new people, form friendships and go on to sherpa many others. All this because I had one good experience from LFG. Mind you there were some bad moments too but on the whole the Destiny community has been awesome and the fireteam feature is one of the most genuinely amazing things to happen to this game. It made finding people a lot more easier and I want to thank Bungie for that :)
English
#destiny2 #FeedbackD2 #Thankyou #lfg #fireteam
コメント 返信 トピックを作成
報告