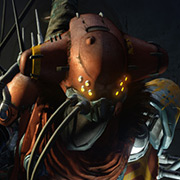 Hello there everyone, First of all I want to get out of the way that the thing I absolutely [b]don't[/b] want to see in Destiny is Outbreak Perfected being nerfed. I've been absolutely in love with the feel of this gun, ever since I got in Destiny 1 (The Outbreak Prime quest for me was absolutely amazing). The gun now feels even better inside of Destiny 2, and that's good, we need exotics that feel good! So the reason I'm writing this, if you people at the Sandbox team of Destiny 2 do decide to nerf Outbreak Perfected, I have a proposal that I think will minimize the amount of hate that the nerf will get, by keeping the gun's exotic feel, while still reducing the amount of people that think they [i]have to[/i] use this gun and nothing else ([i]which isn't the case now either, but Bungie may see it that way[/i]). I think that if you guys nerf anything it should be the damage multiplier gained from attaching nanites to a target. Not the feel of the gun, not the ammo of the gun and not the damage it or its nanites deal. I do think this nerf should only be notably applied if there are lots of nanites attached, as to make it less viable against bosses when the entire team is using the gun, but keeping solo play mostly the same. People on the forum, I know this post will probably get a lot of hate. However, I do think that I'm saying something here that needs to be said. Nobody in the community liked the nerfs to super-gain-exotics, Whisper of the Worm, etc, that they did at the beginning of this season. So that's why I'm telling Bungie how they should tackle this situation, and not have another one of our favorite guns become absolutely obsolete. I love the Outbreak Perfected, and I really don't want to see it nerfed, but if they do decide to nerf it, I would like it to be as I just said in my proposal.
English
#balance #destiny2 #FeedbackD2 #outbreak
コメント 返信 トピックを作成
報告