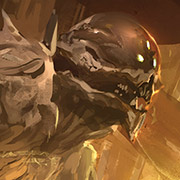 ghost59
If the vex could travel through time, we shouldn't exist. No matter what the vex should have won unless the vex are secretly stupid.
English
Comment Reply Start Topic
Report