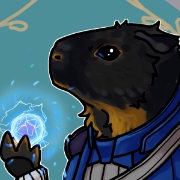 As the title says. This is a warning for anyone who's planning to hop into competitive right away now that the game's back up now it seems. It's still uh, warming up to the influx of players swarming into the gates (like myself) it seems. I went right back to queueing up for Trials once I got in, and then everyone gets booted with a calabrese before second round even starts. This has resulted in getting a comp ban for the moment unfortunately so I can't, uh, get back on my sigma female grindset I guess. Which is alright, Trials this weekend is absolutely brutal and I guess I could use a break from it for some hours. It ain't easy being a gamedev or maintaining servers like these so I'm chill, I'm pardoning the dust, I got work in an hour anyhow. Don't be harsh on them and just take this post as a warning, to maybe not try and jump into comp immediately once the servers come back up, lol. Do some warmup games in regular crucible first to test network conditions (and because warming up is good habits anyways.)
English
#Help #trials #Ban #Comp #Errorcodes #calabrese
Comentar Respuesta Abrir tema
Denunciar