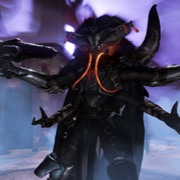 OhtheHugeManity5
Broooooo. When I read the lost pages of the journal and learned about the Exo-Clovis and the AI Clovis together I guessed that after a mind wipe he'd probably rebel against the AI or something. [spoiler]But I'd never have expected him to be Banshee in my wildest dreams. Kinda ironic, really. He started out by maintaining his mind despite a failing body. Now he's got a failing mind despite a functional body.[/spoiler]
English
Comentar Respuesta Abrir tema
Denunciar