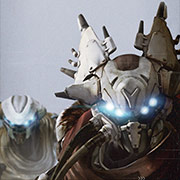 Okay. I can't stand people. I will never join a clan so I will never have Redrix Claymore. I'm okay with that. But you guys said Destiny offers an activity for every mood. I think every mood should be rewarded. I'm not asking for Redrix Claymore for competitive Rumble, lol... But I AM Asking for a badass Sidearm with perks tailored to dealing with chaotic and fast gameplay. It could start as two round burst, then when you get a kill, it becomes three round burst and gets a faster fire rate, promoting survival and quickness, At three kills, the sidearm will cause normal health regeneration immediately after a kill, promoting further survival. And this could be a rank 4 reward. Competitive Rumble would give points at the end of the game to the two best players, and the player in third would receive no points, but won't lose points either, so you still have to be the best to get this badass Sidearm. Ahh, one can dream.
English
#feedback #PvP #Crucible #Noticemebungie
Comentar Respuesta Abrir tema
Denunciar